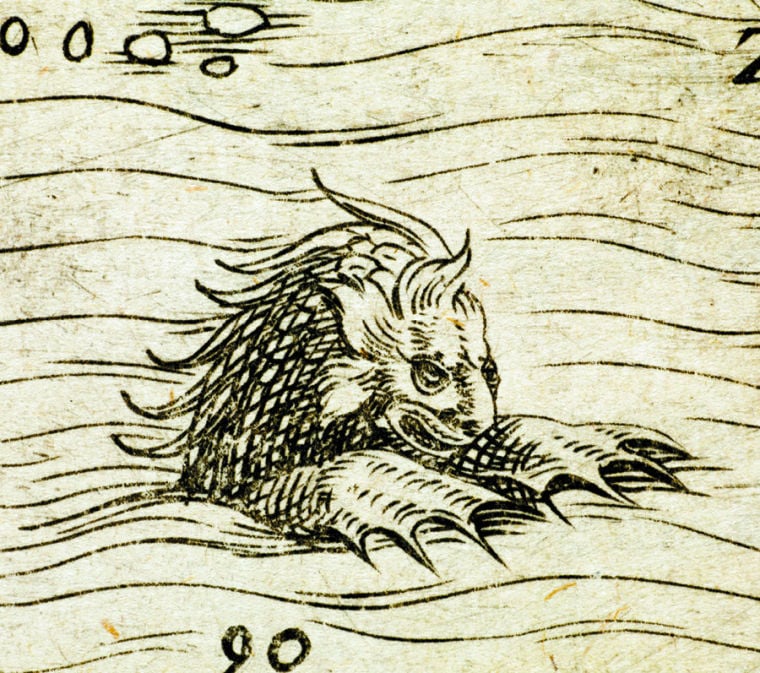 Menacing sea monster on Gastaldi's map of Africa in the 1563 edition of  Ramusio's Navigazioni; image from Sea Monsters on Medieval and Renaissance Maps by Chet Van Duzer, published by The British Library, courtesy the author 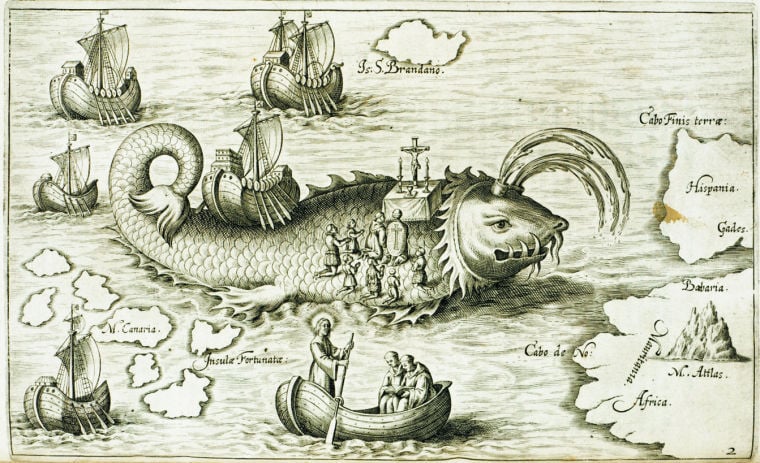 St. Brendan's ship on the back of a whale, and his men praying, in Honorius Philoponus' Nova typis transacta navigation, 1621; image from Sea Monsters on Medieval and Renaissance Maps by Chet Van Duzer, published by The British Library, courtesy the author 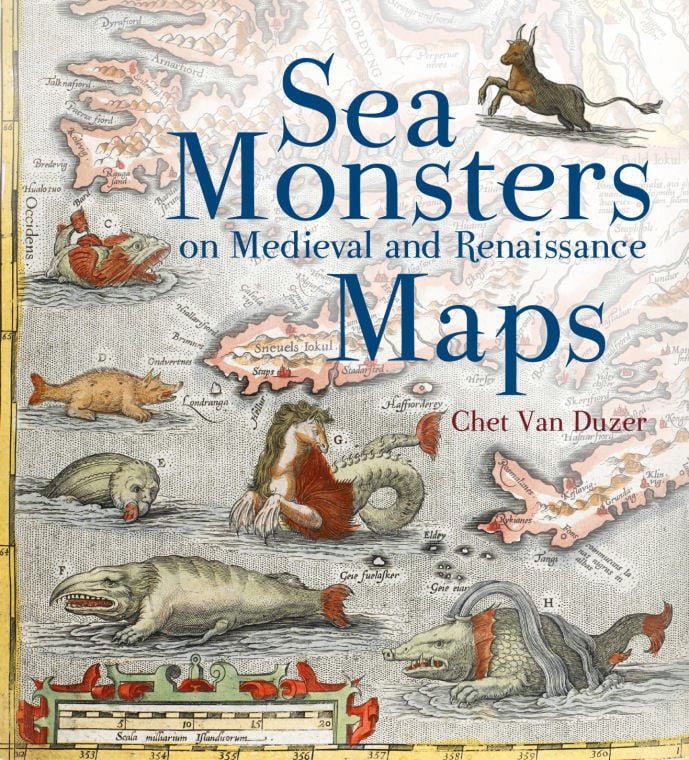 Menacing sea monster on Gastaldi's map of Africa in the 1563 edition of  Ramusio's Navigazioni; image from Sea Monsters on Medieval and Renaissance Maps by Chet Van Duzer, published by The British Library, courtesy the author

St. Brendan's ship on the back of a whale, and his men praying, in Honorius Philoponus' Nova typis transacta navigation, 1621; image from Sea Monsters on Medieval and Renaissance Maps by Chet Van Duzer, published by The British Library, courtesy the author

We have all seen them in reproductions, those maps of a geographically naive world in which the waves of immeasurable oceans are populated by fearsome creatures. What may not have crossed our minds is that there exists a subculture of people who study these fantastical beasts and discuss them exhaustively with one another — and, more amazing still, that they do so with no apparent sense of bemusement or irony. In the introduction to his opulently illustrated volume Sea Monsters on Medieval and Renaissance Maps, published in June, Chet Van Duzer writes of these cartographic creatures, “Curiously, the subject has been little studied.” And yet his copious endnotes suggest that scholars have indeed been cultivating a vigorous dialogue on the topic, communicating in the pages of arcane journals through such flirtatiously titled articles as “Animals in Context: Beasts on the Hereford Map and Medieval Natural History,” “The Sea Monsters of Olaus Magnus: Classifying Wonder in the Natural World of Sixteenth Century Europe,” and “Erudition on Display: The ‘Scientific’ Illustrations in Pico della Mirandola’s Manuscript of Pliny the Elder’s Natural History.”

That scholarly round robin seems to be getting ever more active, by the way. Only a few weeks after Van Duzer’s book was published, a related one appeared: Joseph Nigg’s Sea Monsters: A Voyage Around the World’s Most Beguiling Map, from the University of Chicago Press. Whereas Nigg trains his microscope on the organisms inhabiting a single map — the Carta Marina produced by Olaus Magnus in Sweden sometime between 1527 and 1539 — Van Duzer stakes a claim as a generalist. He casts his net wide through the oceans of maps produced by European cartographers beginning with a series of mappaemundi (“maps of the world”) illustrating medieval manuscripts of the Commentary on the Apocalypse by Beatus of Liébana. The most striking among them is the “Gerona Beatus mappamundi” from the year 975. Here, the known bits of Europe, Africa, and Asia — separated by the Mediterranean, Nile, and Tanais — float entirely encircled by the ocean. In that moat-like sea we find images of ships and of more-or-less recognizable fishes, but also of stranger creatures: for example, the serra (or “sawfish”), which would swim beneath boats and slice them in half with its serrated fin (so Isidore of Seville assured his readers), or such terrestrial-aquatic hybrids as the marine chicken and the marine dog. Crossbreeds of that sort grew logically from the enduringly influential observations of the natural world promulgated by Pliny the Elder (A.D. 23-79); “so the vulgar notion may be true,” he wrote, “that anything which is produced in any other department of Nature, may be found in the sea as well.”

From there, Van Duzer works his way through a plethora of historical maps, which fall into three categories: mappaemundi, which provided a general idea of the extent of the world; nautical charts (or portolan charts), which offered relatively detailed guidance for the navigation of shorelines and coastal cities; and maps of the ports themselves (of which Van Duzer considers only one example, an 11th-century sketch-map of the Italian port of Brindisi). “It is important to emphasize that the majority of medieval maps do not have sea monsters,” he cautions. Still, those that do are numerous, and our ancestors found that they served a laudable educational purpose. In his 1510 treatise De cardinalatu, for instance, the author Paolo Cortesi proposed that the palaces of cardinals include among their decorations world images or maps of recent geographical discoveries. He writes:

The same holds true for paintings that show the remarkable nature of various creatures, in which the diligence of observation is the more praiseworthy the less familiar the species portrayed in the paintings. In these types of curiosities and tales, therefore, the praiseworthy depictions are those that allow the intellect to be sharpened through interpretation, and through whose learned delineation the mind is made more erudite.

While it cannot be said that Van Duzer’s prose is spirited, it is scrupulously precise, more given to description and historical minutiae than to the interpretation Cortesi hoped such images might inspire. Chapter headings suggest a degree of levity not conveyed in the text itself, but the information is not without interest. A section titled “How to Buy a Sea Monster,” for example, considers a legal document penned in Florence in 1400. It clarifies that the pricing of a luxury map reflected the number of illustrative figures included in the painting and that the inclusion of an inordinately large number of such illustrations encouraged the artist to dig deeper into his imagination. Writes Van Duzer:

“It seems likely that when an artist was paid to paint a large number of sea monsters on a map, he would do so without seeking information on works of natural history about where a particular sea monster had been seen. That is, payment for a large number of sea monsters changed their nature, tending to separate them from their geographical or historical sources, and thus reducing their geographical significance on the resulting map.”

In the world of sea-monsters-on-maps people, it is best to simply accept that the authenticity of a creature is predicated on its pedigree in historical scientific sources rather than on whether or not it actually existed. It would seem impolite to object that a hybrid fish-pig-dog one might find on an early map never actually swam the seas, even if some natural-history treatise suggested that it did. A redefined position on reality allows readers to go ahead and luxuriate in tales that do us no harm — and especially to delight in the accompanying images — even if those stories and pictures would have struck terror into the hearts of Renaissance mariners. Take, for example, the improbable legend inscribed on a richly decorated nautical chart made in 1413 by the Catalan cartographer Mecia de Viladestes, which amplifies on the ancient belief that whales could be mistaken for land masses:

This sea is called “mar bocceano,” and therein are found great fish, which sailors take to be small islands and take up their quarters on these fish, and the sailors land on these islands and make fires, and cause such heat that the fish feels it and sets itself in motion, and they have no time to get on board and are lost; and those who know this, land on the said fish, and there make thongs of its back and make fast the head of the ship’s anchor, and in this way they flay the skin off it, whereof they make sraianes [ropes?] for their ships, and of this skin are made good coverings for haystacks.

Variations on this marine myth recur quite a bit, sometimes citing St. Brendan as the first person to perch a boat on a whale. Martin Behaim’s terrestrial globe, constructed in 1492, incorporates a text that leads to a happier ending for the sailors: “He [St. Brendan] is said to have landed on this fish, thought it was dry land, and lit a fire on this fish. When the back of the fish began to burn, it plunged into the sea. The people reembarked in their boats and fled to the ship. This event is not reported by the Portuguese infidels.”

The earlier sea monsters Van Duzer considers are depicted in illuminations, drawn or painted on manuscript maps. The painting of sea monsters eventually emerged as a specialist’s pursuit. In considering Pierre Descelier’s “large … and gloriously coloured manuscript world map of 1550,” Van Duzer finds that it “is not very rich in sea monsters.” But the sirens and monsters it does include are clearly overpainted in a style markedly different from the paint application on the underlying map, evidence (Van Duzer argues) “of a specialist in sea monsters in Descelier’s atélier.” By that time, mapmaking had largely intersected with the field of printmaking. Some of the most elaborate depictions of sea monsters on maps are found on 16th-century maps printed as engravings or from woodblocks. A few persisted even into the 17th century, when Honorius Philoponus’ Nova typis transacta navigatio (published in Linz in 1621) included a map of the eastern Atlantic that conflates the St. Brendan legend with a depiction of the missionary journeys of the monk (or friar) Bernardo Buil, who has set up an entire altar on the back of an aquatic beast.

“But with the close of the sixteenth century,” reports Van Duzer, “the period of the most florid development and widest use of sea monsters on maps had come to an end.” By then, these creatures had graced maps for hundreds of years, often depicted side by side with ships. The ships persisted, receding from the cartographer’s realm only in the 18th century. “In fact,” Van Duzer writes, “the two motifs are to a certain extent antithetical: while sea monsters on maps discourage human sea travel by indicating its grave dangers and uncertainties, most images of ships on maps boldly affirm the ability of humans to traverse the watery element, encouraging new voyages and even affirming political control over the seas.” ◀

“Sea Monsters on Medieval and Renaissance Maps” by Chet Van Duzer is published by The British Library.