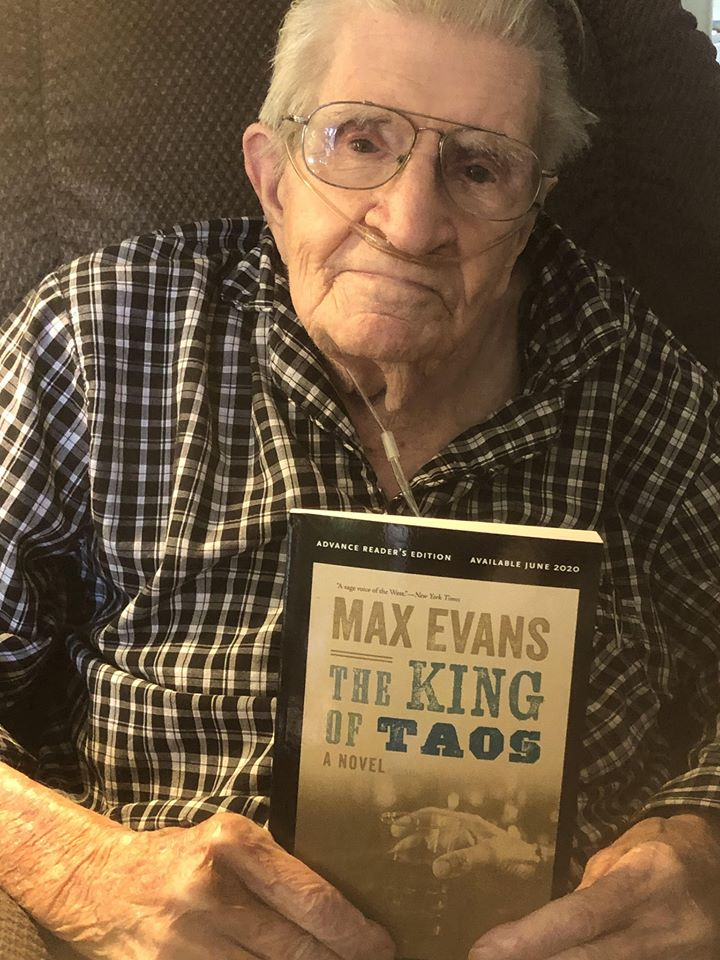 A 2014 headshot of Max Evans; all photos courtesy Lorene Mills and Max Evans unless otherwise noted 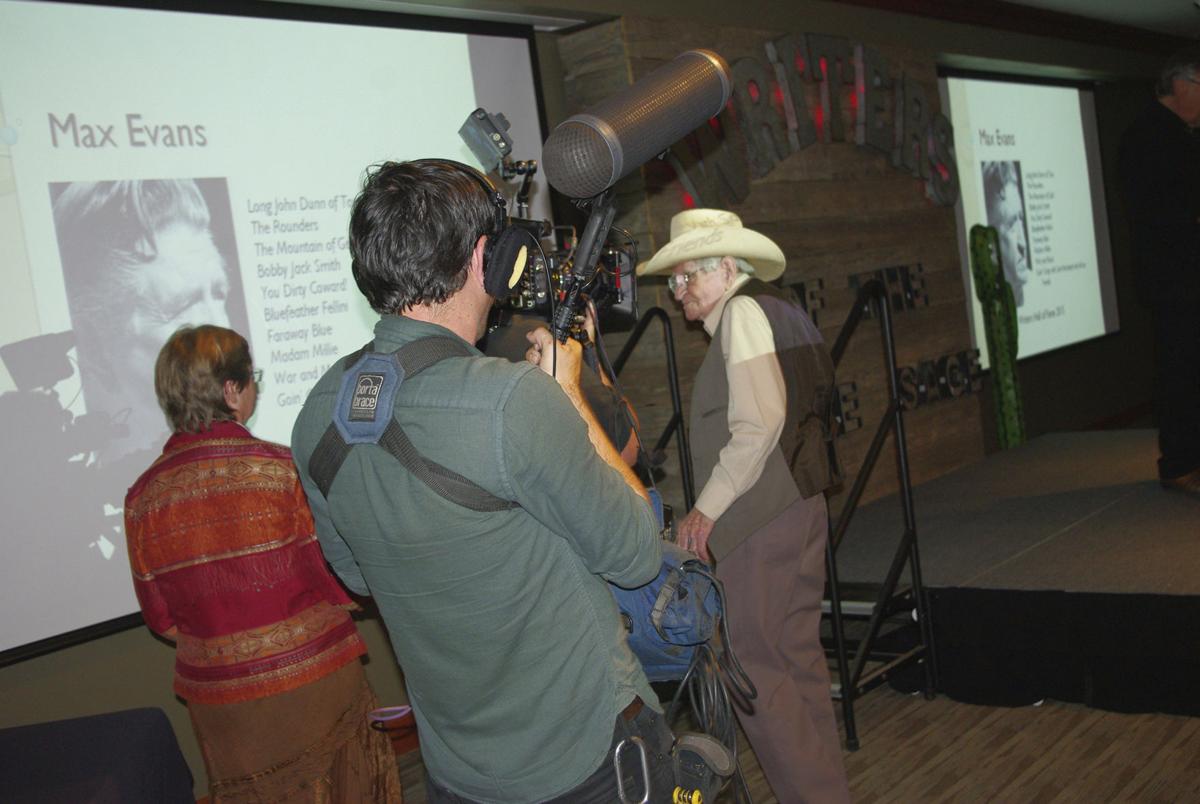 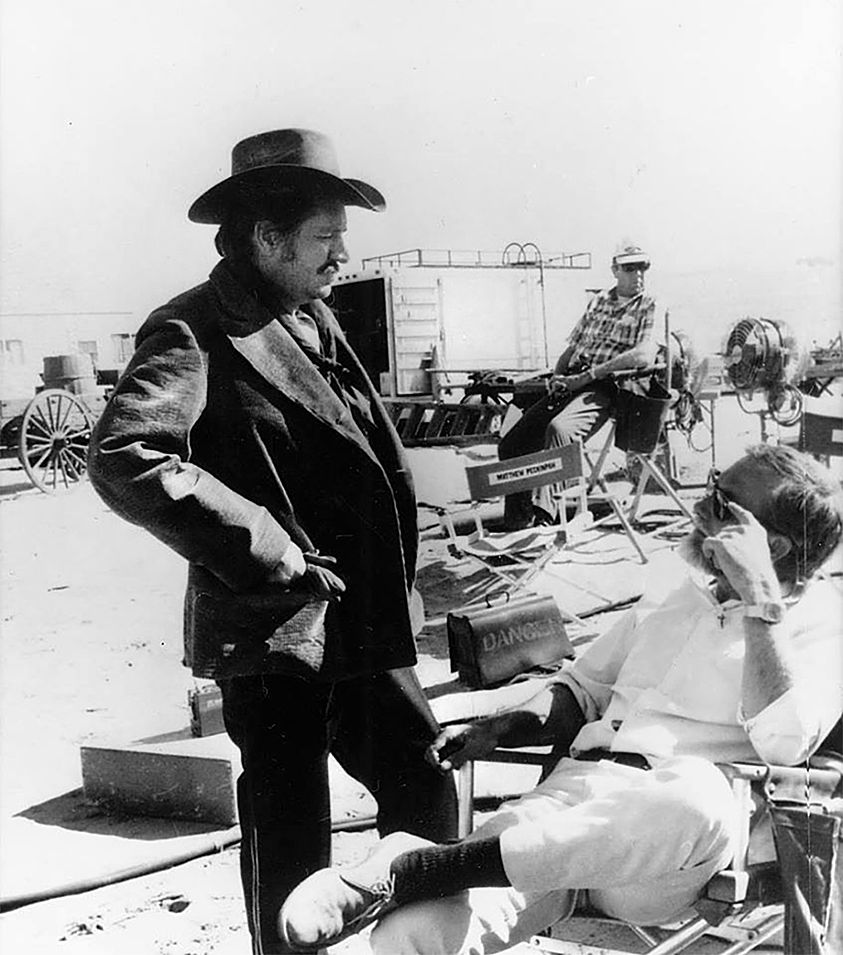 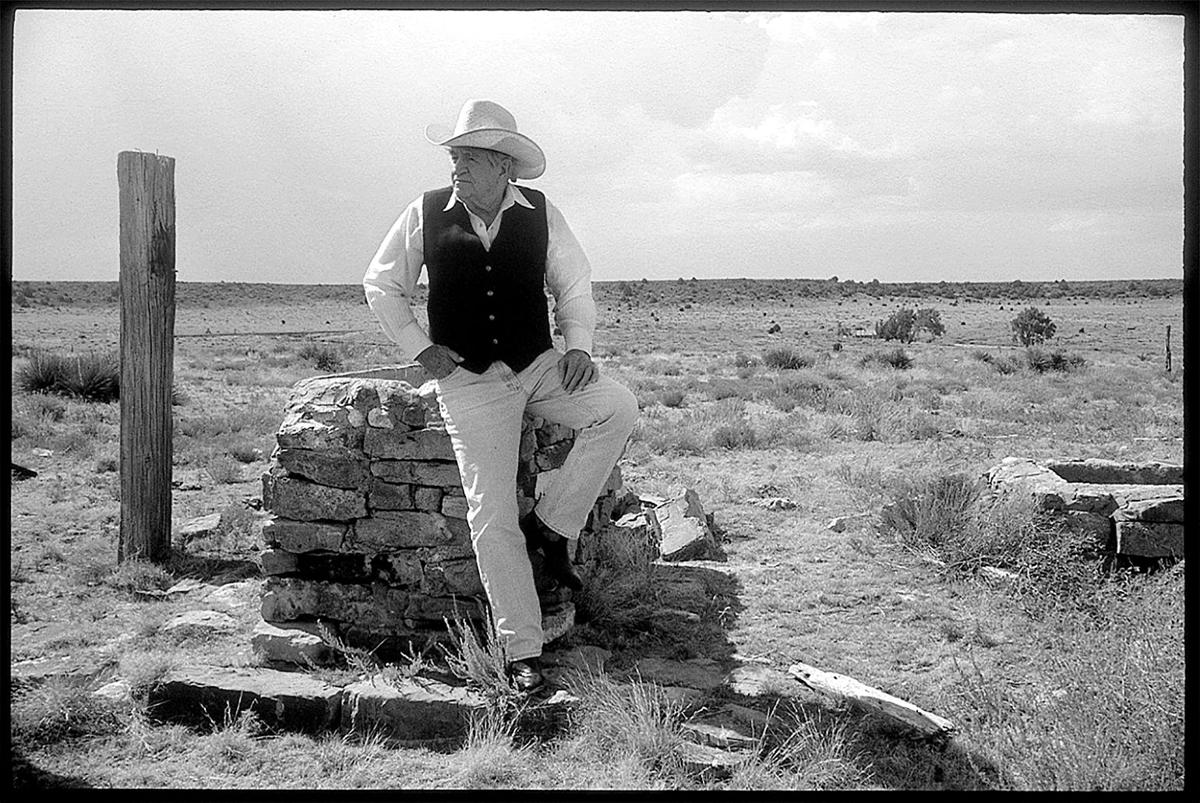 Max Evans at the ruins of his ranch in the “hi-lo country” in 2002, photo David Bowser

A 2014 headshot of Max Evans; all photos courtesy Lorene Mills and Max Evans unless otherwise noted

Max Evans at the ruins of his ranch in the “hi-lo country” in 2002, photo David Bowser

He’s been a cowboy, a rancher, a miner, an infantry soldier, an artist, and a prolific writer of books on the American West. In his novels and stories, the eminent Max Evans forgoes romantic visions of the mythic West to champion the common man of today, like a veritable John Steinbeck. But in his new novel, The King of Taos, he turns back the clock to a time when rabble-rousing artists and writers lived for the moment, decorum be damned.

The novel, which follows the misadventures of aspiring painter Shaw Spencer, Taos local Zacharias Chacon, and their close-knit circle of friends, is a love letter to an era long gone — Taos in the late 1950s — and a paean to the people who lived there.

“They made the most of their misfortunes, and that’s a wonderful trait,” Evans says about the Taoseños he knew in life.

Evans is a towering figure in contemporary Western literature. He’s won many literary awards, including multiple Spur and Wrangler awards and an Owen Wister. In 1993, he was honored with the New Mexico Governor’s Award for Excellence in the Arts. He was the subject of Lorene Mills award-winning documentary Ol’ Max Evans: The First Thousand Years (2017), and he was inducted into the New Mexico Film and Television Hall of Fame in 2018. “He’s this larger-than-life literary icon,” says noted Western fiction writer Johnny Boggs. “When you say you write about the West, most people are going to think you’re this Louis L’Amour traditional writer, you know — gunfighters and cowboys saving the day. Usually, he’s writing about the Depression era and beyond. The West didn’t end in 1890. Cowboys are still making a living today. He kind of brought that to light with a very humorous slant.”

Boggs, a recipient of the 2020 Owen Wister Award for Lifetime Contributions to Western Literature, is the author of several articles on Evans. “He doesn’t just write about cowboys and ranchers. He can tell a Western story about artists, mystics, miners, and even a plumber.”

At times, The King of Taos (University of New Mexico Press, 176 pages, $24.95) reads like a memoir. There’s a reason for that. “They were pretty real to me,” he says of the central characters in King, who were based on people he knew. “Years later, I had to fictionalize them to a great degree.”

On this day in early June, Evans, 95, is recuperating from a head cold, and his Western twang sounds a bit rough around the edges. A little like Slim Pickens. He’s direct, personable, and plainspoken. He sounds, in fact, a lot like his writing.

“Another person that was pretty real in that book was Dal Holcomb,” says Evans, who used the commercial artist’s real name for the character. “He was my first mentor. He was enormously successful. He’d get magazine covers and things and made $45,000 a year. It doesn’t sound like much now, but in those days, that was a huge sum of money. He spent it gambling away and kept right on painting. He influenced me for the better. He gave me my first lessons in real art.”

Evans’ roots are in the small ranching town of Ropesville, Texas. He first visited Northeastern New Mexico as an adolescent in the 1930s and was amazed by the skies he saw over the majestic, wide-open land. “The hi-lo country,” his own name for the area, became a title for one of his novels. “It’s very thinly populated up there,” he says. “Stephen Frears made a pretty good movie out of that.”

The British director wrote the screenplay for The Hi-Lo Country (1998), which starred Woody Harrelson, Billy Crudup, and Patricia Arquette. It was the second film based on one of Evans’ books. “They were fixing to do a third one called My Pardner,” he says. “In fact, I signed the contract and everything. The next day the pandemic hit and everything canceled out. It was going to film this summer.”

Evans moved Taos in 1949. He was an aspiring artist, like his alter ego Shaw Spencer, who had some success. But Evans had a lifelong love of literature. He consumed everything from cheap paperback Westerns to the writings of French novelist and playwright Honoré de Balzac. He tried his hand at writing fiction in the late 1950s. Despite good reviews, his first two novels didn’t sell, but after acquiring a New York agent, all that changed with The Rounders. Published in 1960, the tale of two bronco busters was hailed for its realistic depiction of contemporary cowboy life. It was so successful that it was optioned for film in 1965.

Initially, Metro-Goldwyn-Mayer (MGM) tapped acclaimed director William Wellman (1937’s A Star Is Born) to helm the production. Wellman wanted to cast Evans in one of the lead roles, opposite Fess Parker, but Evans wasn’t interested. “That wasn’t my game in life. I was a painter and a writer.” A seasoned actor, Parker also didn’t want Evans, who had no experience as an actor. A convoluted series of production woes caused Wellman to walk off the set. “We had to do it all over again with different people and a different director.” The studio hired Burt Kennedy (The War Wagon, 1967) to replace Wellman, and Kennedy cast Henry Fonda and Glen Ford as the leads, two giants of the Western genre. “I think we got a better picture. It was the first real successful Western of the contemporary scene. No shoot ’em up stuff at all.”

Although Evans sets most of his books in the West, he doesn’t consider himself a Western writer. He says he just writes what he knows. But as a genre, the Western is long past its heyday, something he acknowledges with a twinge of regret. “I don’t suppose they’ll ever come again. When I was a young man, it wasn’t only in movies but in magazines and books. You’d go in a drug store and it was just rack after rack of 10-cent Westerns. There was a whole industry of writing and printing Westerns. That’s all gone.”

The King of Taos, which was published in June, wades into the genre again. “It’s changed a lot, but the landscape around Taos is still majestic. If you look up across that country, you can see about six or seven different skies. It’s the only place in the world I ever saw that.”

Midway through this humorous, tenderhearted tale, Shaw visits the studio of the real-life painter Hans Paap. A longtime Taos fixture, an aging Paap gives the younger newcomer a bit of advice. “There are only two things in this life that really matter in the finality: life and love.”

It’s a principle that’s guided Evans, who thinks he’s written “about 30” books of fiction and nonfiction. He talked with Paap in the artist’s studio many years ago.

“It was a magic visit,” says Evans, who now lives in Albuquerque. “He’s a tremendously underrated artist around the world. I guess it was because of his attitude towards the world. He just didn’t give a damn about anything but a beautiful woman to paint and white canvas to build. That’s all he cared about.”

When the characters in the novel fight, con the East Coast newcomers out of their money, or drink all night and crash their Buick into a gravestone, Evans doesn’t judge them. The characters aren’t good or bad. They’re just people. They spend their entire paychecks to get good and drunk. Perhaps not surprisingly, they find themselves in quite a few scrapes.

“I believe those stories he writes about barroom brawls are all based on something that actually happened,” says Boggs, who nearly witnessed one at a writers’ convention. “It was maybe 17 years ago. There’s this big drunk in the hotel bar, and he’s giving Max a bit of a hard time. Max is telling stories, and he’s getting furious at this drunk who’s interrupting him on his king’s throne. Max had to be in his mid-70s by then. He looks at the drunk, and he says, ‘I’ll rip off your head and spit down the hole.’ Then he turns to me and says, ‘Johnny, get him out of here before I kill him.’ I get the drunk out of the bar, and I realize that I came this close to being right in the middle of a Max Evans saloon brawl.”

He invests these passages with humor, and his characters are endearing.

“It was a wonderful thing to witness these people. I just marveled at it. I think that’s the reason it took me so long to finish the book,” he says of his first novel in six years. “I’d start it, and I’d get carried away thinking about those people and how wonderfully they had adapted to this life.”

But his memory of Taos butts up against another less pleasant one. Evans spent six-and-a-half months in bloody combat during World War II, including the invasion of Normandy. That life-changing experience, which he doesn’t like to talk about, left him with a reverence for life.

“I don’t hardly ever dwell on things. But here lately, with all this madness happening around the world now, my thoughts go back as if I was a stranger. It seems so real all of a sudden. It’s just strange. A very powerful emotion.”

Evans jokes that he’s 1,000 years old. But when he explains why he likes to say that, it doesn’t sound very funny. He says it’s because he feels that way. He’s a man who’s seen a century’s worth of human foibles, and he marvels at the fact that the human race hasn’t learned its lessons. We still fight wars for the same old reasons and with the same prejudices we’ve always had. “With all this wondrous beauty and music and painting — all sorts of wonderful things — we have this one terrible blind spot.”

That, if anything, is why he writes with such deep humanity. It’s to celebrate what we do have and remember its value, even in its imperfections. “We’re not human if we don’t.” ◀