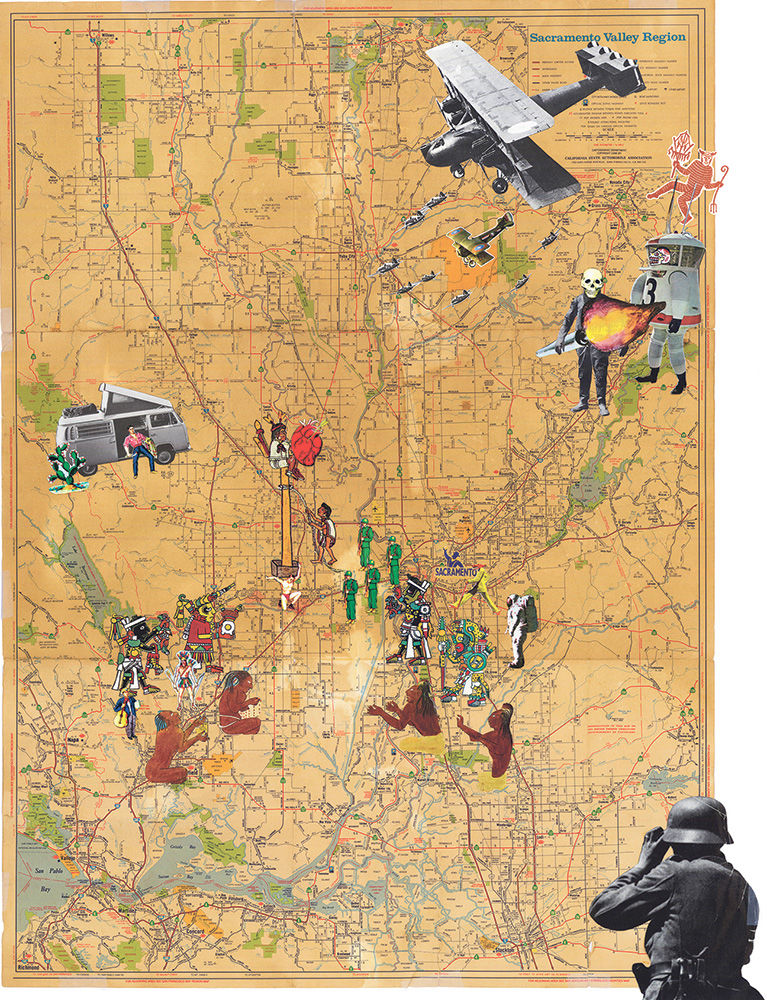 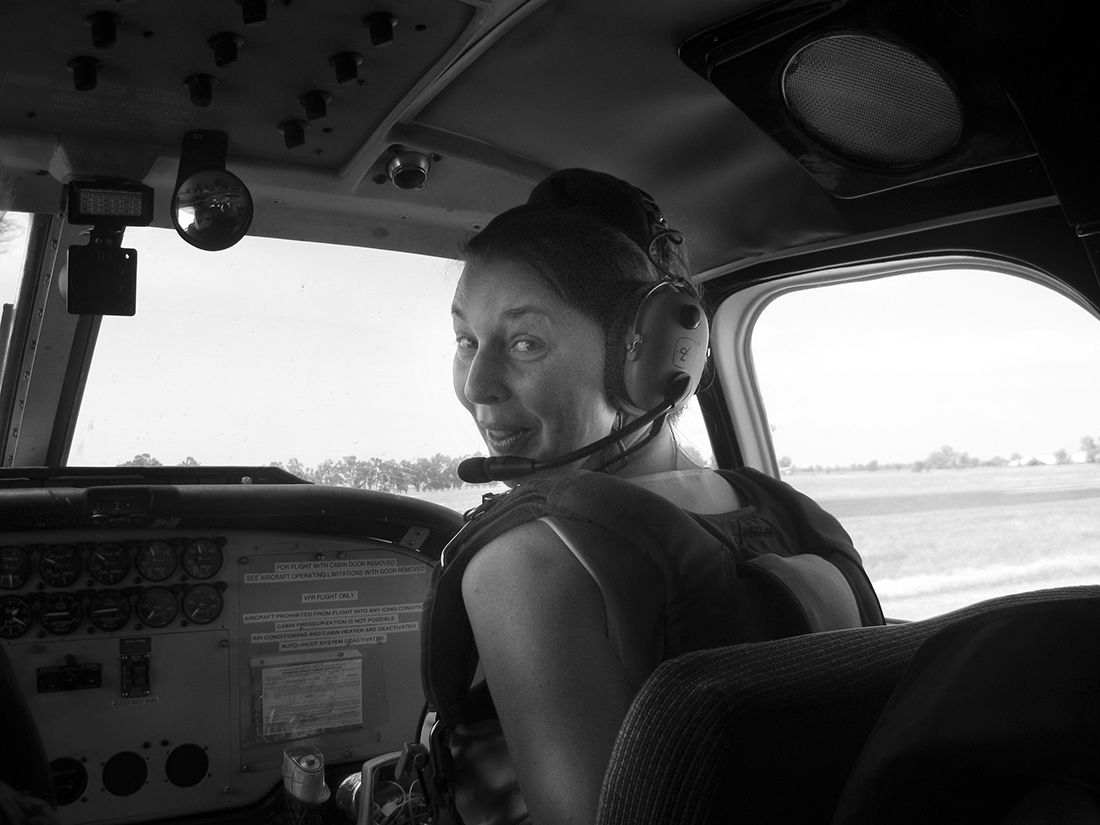 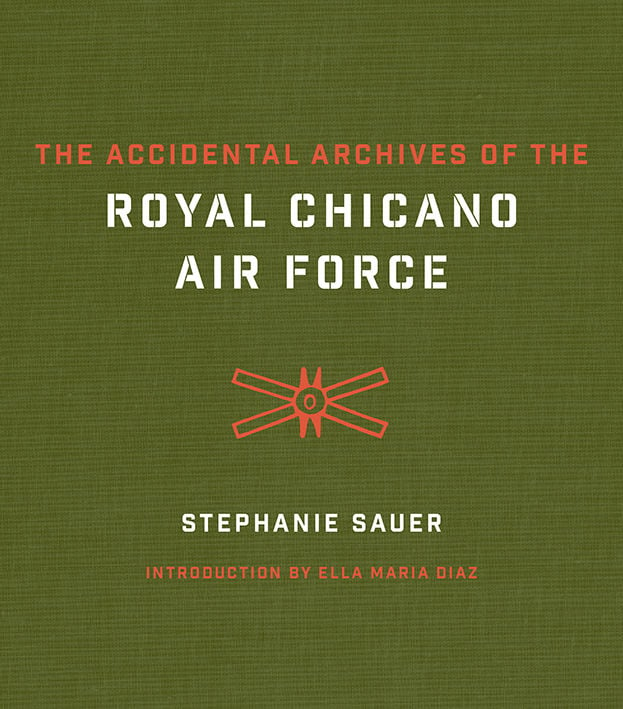 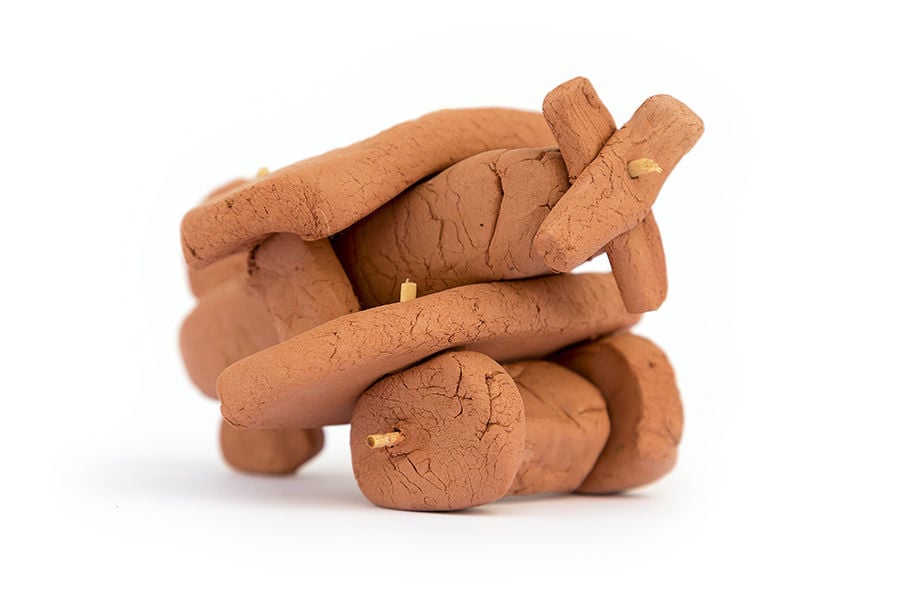 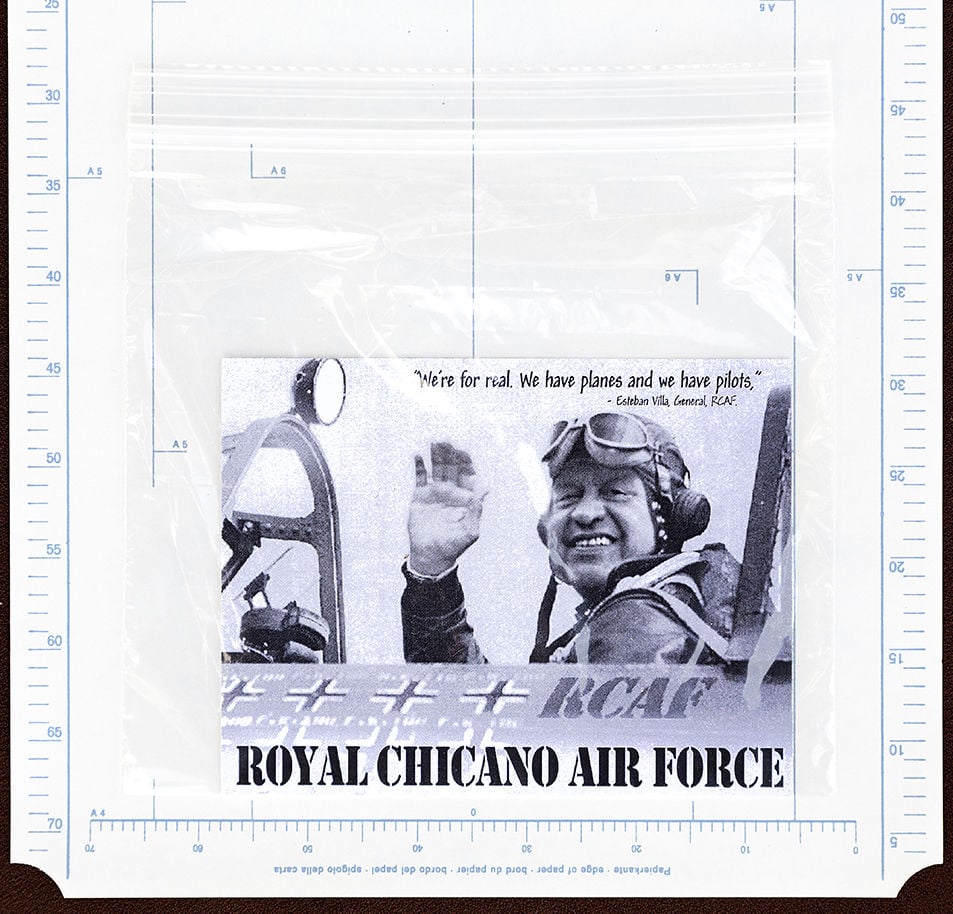 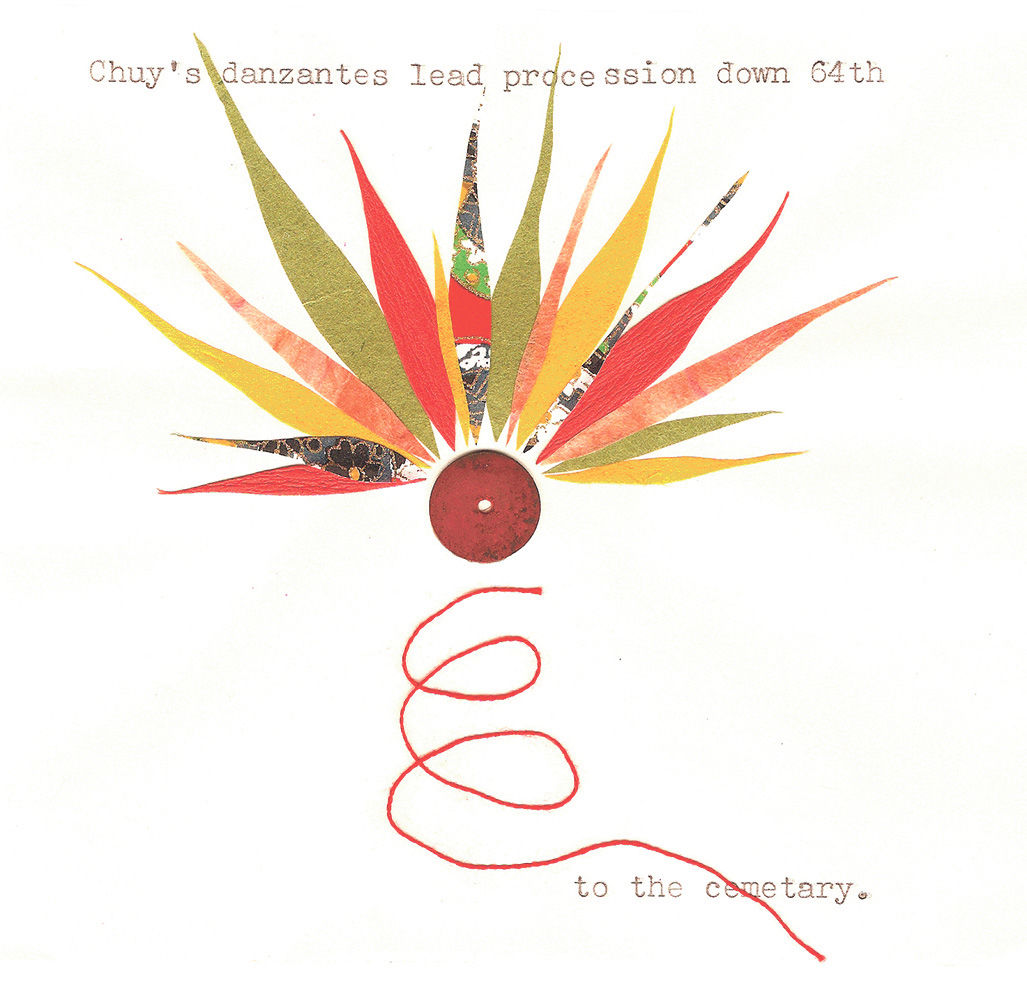 In the 1997 film Lost Highway, the character Fred Madison, played by Bill Pullman, says, “I like to remember things my own way.” When asked what he means by that, he replies, “The way I remember things. Not necessarily the way they happened.” That is not to say that Madison lies when he talks about his memory of events, but rather that his mind has transformed his recollections into a different kind of truth. In the arts and sciences, narratives guide research — but far too often, those stories come from a limited perspective and are twisted to conform to preconceived ideas. Truth is what Stephanie Sauer, in her guise as the archivist character La Stef, is both seeking and subverting in The Accidental Archives of the Royal Chicano Air Force, the record of a rebel art collective that is at once full of truths and half-truths, evidence and facts, myths, exaggerations, and maybe even a few whoppers. But, as in the words of Chief Bromden in Ken Kesey’s One Flew Over the Cuckoo’s Nest, “It’s the truth, even if it didn’t happen.”

In the book, published by the University of Texas Press, Sauer’s La Stef hints at the poetic license that infuses much of the tome in her “Archivist’s Note.” There, we learn that La Stef’s role as lead archivist on the project documenting the Royal Chicano Air Force began several lifetimes ago. “We did not have writing, but I was born with memory then,” she writes. “I was born with seeing.” In her present incarnation, she has devoted herself to creating “entire libraries of proof.”

But what is The Royal Chicano Air Force? First, it should be noted, it is a real thing — an influential art collective founded in California in 1970 by artist and poet José Montoya and artist and muralist Esteban Villa, and guided by the mantra “La locura lo cura” (Craziness is its own cure). Originally called The Rebel Chicano Art Front, the RCAF changed its name when the acronym was confused with that of The Royal Canadian Air Force. But don’t let the truth fool you. A postcard reproduced in the book shows a Chicano pilot waving from a cockpit along with the quote, “We’re for real. We have planes and we have pilots,” and signed “Esteban Villa, General, RCAF.” The image is cited as “Fig. 2. Evidence bag #1: RCAF postcard feat.” Sauer enlivens what is ultimately a rather serious exercise (more on that later) with a bit of tongue-in-cheek. However, the task of the reader is not so much to separate the truth from the rest but to synthesize it all into a cohesive narrative. Yes, the story is full of holes, and La Stef, in that age-old habit we have of imposing order on chaos and patterns on nature, fills the holes with marvelous invention. But we do the same every time we, as individuals, tell our own stories, and they are no less bereft of meaning for that.

Ironically, it was the very problem the author faced as documenter of the RCAF’s history — the task of interpreting the evidence — that led her, after a year’s worth of writing, to take a new tack. “Back in the early 2000s, I was tasked to write a historical narrative for La Raza Galería Posada, one of the oldest Chicano-indigenous centros in the U.S. and founded by members of the RCAF,” Sauer told Pasatiempo. “I was working as an archivist and oral historian for that organization at the time. So altogether, I spent many years trying to chase after the facts and fit them into the existing structures of the archive and the documentary.” Sauer was engaged at La Raza with recording the memories of the RCAF for posterity. La Stef developed as a sort of alter ego for the author, one who embodied the energy and spirit of her subject, but also an identity with her own distinct perceptions, separate from that of the author.

“La Stef’s character emerged after I threw out that first year of writing, but stemmed from an aspect of myself I encountered as an archivist and oral historian,” Sauer said. “Once I had carried that first manuscript as far as I could take it, I was able to see the parts of the narrative voice that were so problematic and that, frankly, bored me. So I unzipped that outer layer of my identity — the archivist, oral historian, the other — and filled the empty skin with that potent RCAF locura. La Stef then became her own entity: equal parts problem and possible solution. She embodies the perceived neutrality of those involved in the processes of recording and narrating history, and, in doing so, allows us to critique it. But she is also eagerly seeking alternatives and making a case for ‘alter-Native,’ to borrow the scholarly term, ways of recording and recoding the past.”

The serious intent behind the record that emerges is one that questions the notion of fixed histories. “This work is as much — if not more — a commentary on the challenges of archiving such histories as it is about the history itself,” Sauer said. One of the biggest of those challenges is breaking free from the very forms that historians impose on their subjects. “In the West, we are saddled with interpretations of history that are siphoned through lenses that developed in the Victorian era to become what we know today as the fields of archaeology, anthropology, and contemporary museum studies,” she said. “Our popular culture elevates these Western sciences as absolute fact, without much consideration of their long histories of implicit cultural bias and limitations.” One example, from the book, is early RCAF cartography. A chintzy display of Pueblo pottery knockoffs is identified as a collection of wind movement charts. The stylized, linear patterns on the pottery, rather than being discussed as Puebloan in nature, are interpreted as diagrams that chart warm fronts and cold fronts. “The mapped vessels not only allowed for the storage of spirits, dried grains, and jerked meats, but acted as discreet means of carrying out top-secret missions,” she writes in the book. “This work definitely pokes fun at errors in the archaeological record that are grounded in either gross negligence or institutionalized racism,” she said. “I know the field itself has come a long way since its inception, but public perceptions of the science as infallible and definitive have not yet caught up.”

Presenting the RCAF as an actual rebel branch of the U.S. Armed Forces brings some deeper themes into the narrative. Historically, minorities in the armed forces faced institutional racism. Squadrons like the Tuskegee Airmen of World War II, a group of African-American pilots, only existed because of military segregation. That the RCAF is not, in fact, an outfit of the U.S. military but a collective of artists, also hints at the institutional racism of the art world, where dominant movements in Europe and America (but not Latin America or Native America) have been considered the penultimate in artistic expression. To get their work seen, Chicanos, Latinos, and Hispanics, not to mention other minorities, still find themselves exhibiting under their identifying labels. That such segregation continues to exist can be seen in the way their art is discussed from the point of view of the racial or ethnic identity of the maker — something not done with white American and European artists.

So Sauer’s book is not an accurate history of the RCAF, nor is it intended to be. But it is an accurate description of her character La Stef’s attempt at such a history. The author is eager to admit the work is flawed. “I say ‘eager’ because I really am eager to see the gaping holes in RCAF documentation filled in by the members themselves, as well as by scholars, historians, writers, journalists, filmmakers, and other artists,” she said. She cites scholar Rita González’s An Undocumented History: A Survey of Index Citations for Latino and Latina Artists as a record of the gross omission of Latina and Latino artists from the art historical canon. “Why should it be expected that we all know who Jackson Pollock even is, and not, say, José Montoya?” she asked. “I hope my book is just one of many, many more to come that document, reconsider, embellish, or are inspired by the incredible and multifaceted legacy created by members of the Royal Chicano Air Force.”

“The Accidental Archives of the Royal Chicano Air Force” by Stephanie Sauer is published by the University of Texas Press.

I unzipped that outer layer of my identity — the archivist, oral historian, the other — and filled the empty skin with that potent RCAF locura. La Stef then became her own entity: equal parts problem and possible solution. ... She is also eagerly seeking alternatives and making a case for “alter-Native,” to borrow the scholarly term, ways of recording and recoding the past. — author Stephanie Sauer