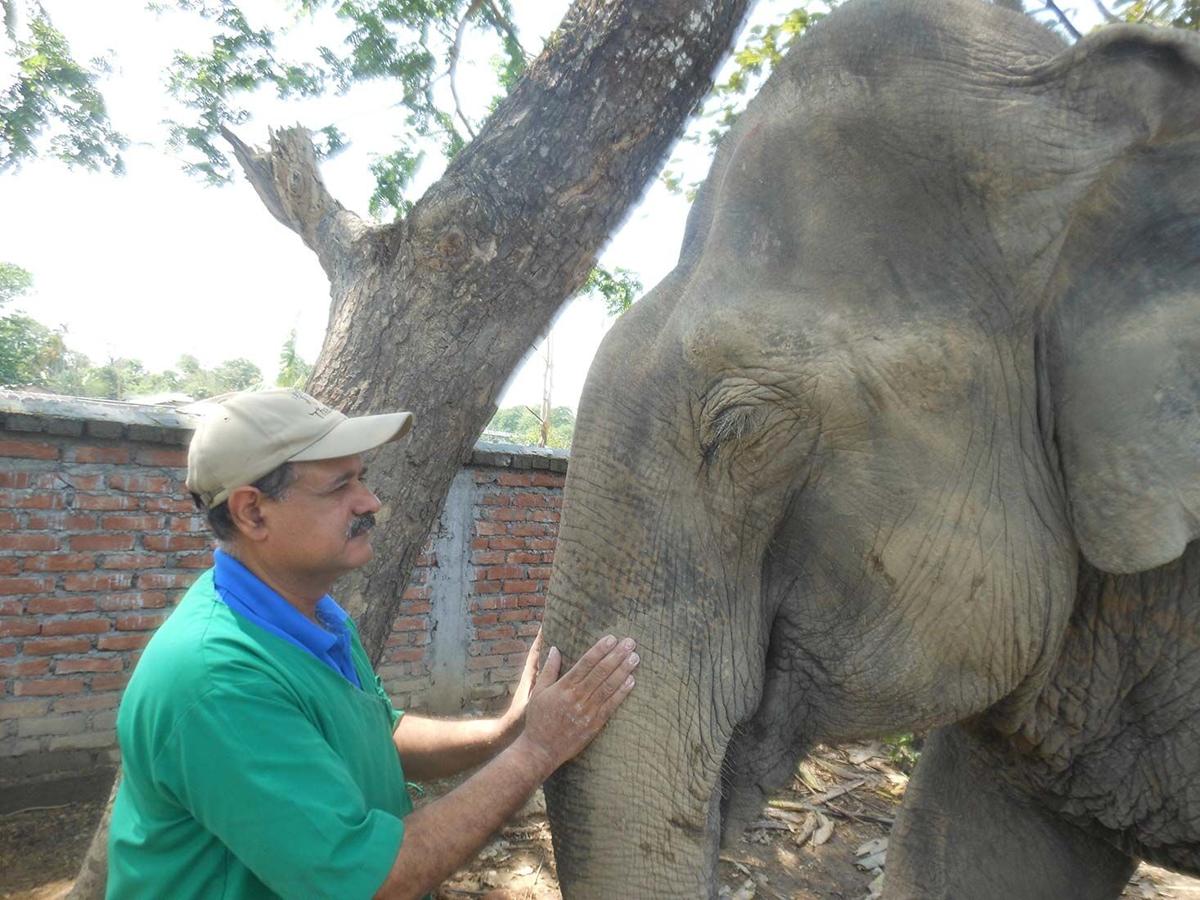 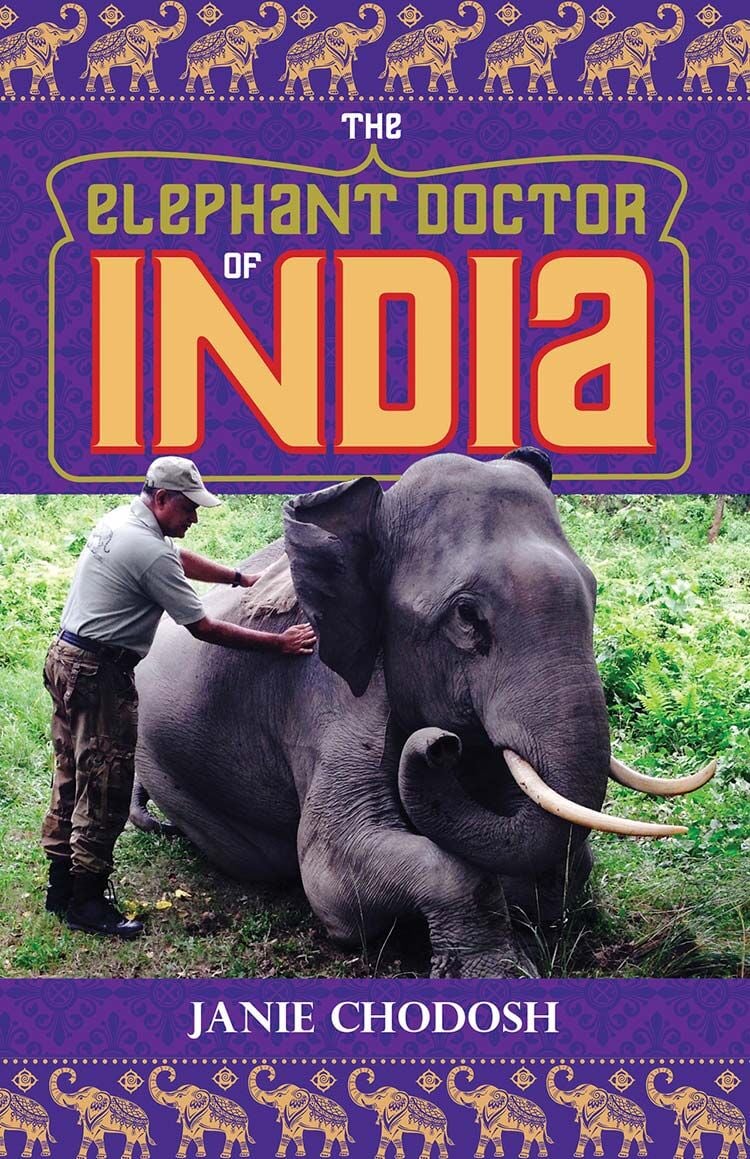 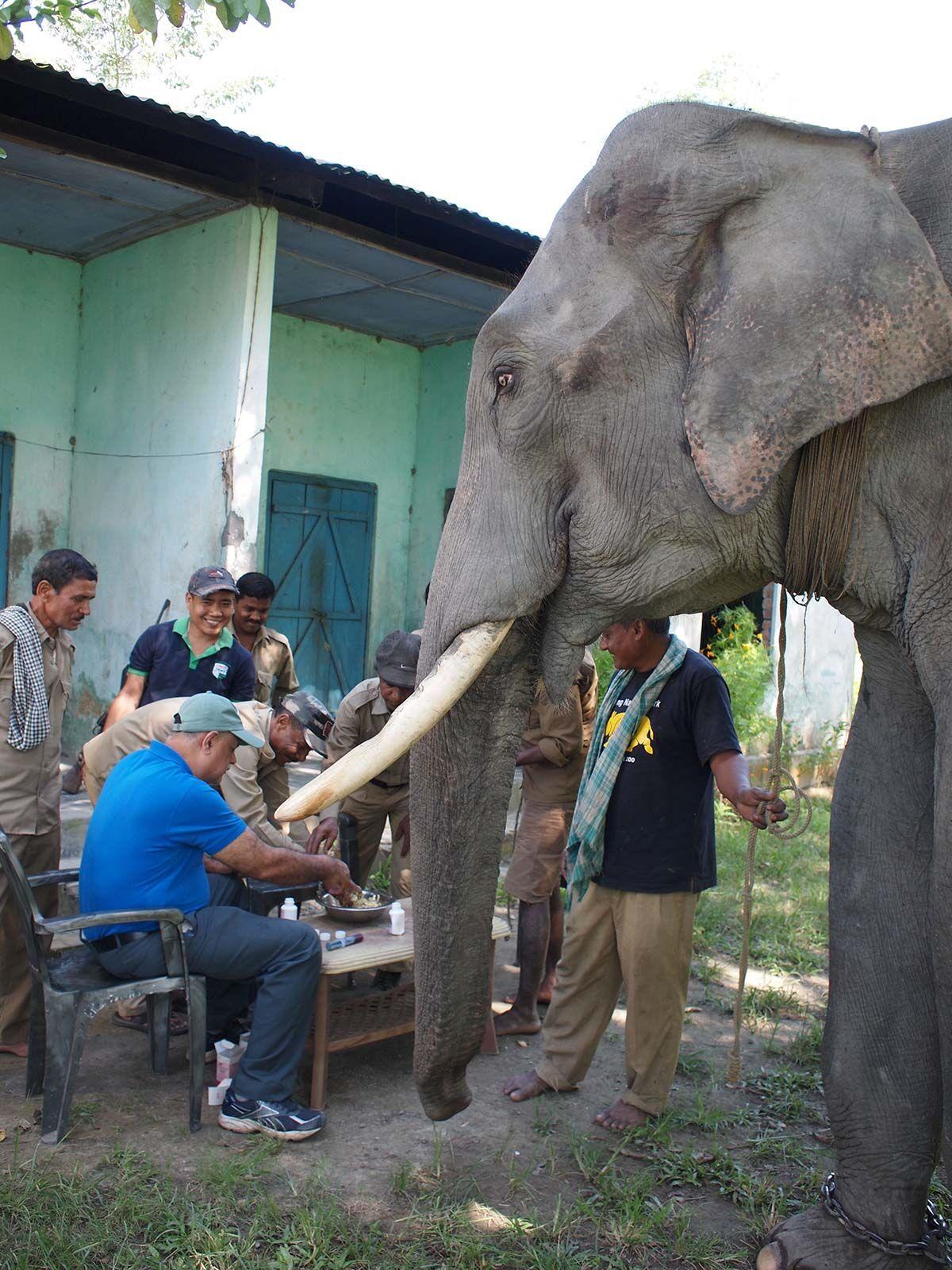 Dr. Sarma prepares medicine for a captive elephant at a healthcare clinic in 2015, photo Callum Bell

Dr. Sarma prepares medicine for a captive elephant at a healthcare clinic in 2015, photo Callum Bell

When Dr. Kushal Konwar “KK” Sarma tends to an elephant, the famous veterinarian might stand on a ladder and speak softly into the huge animal’s ear. Or, he might climb a tree and shoot it with a tranquilizer dart so that it can’t hurt anyone.

In Assam, India, Sarma is the leading expert in elephant medical care. He’s the guy who figured out how to sedate rampaging males in musth, a hormonal shift that causes an elephant’s testosterone to spike to 60 times its normal level. Before his daring attempts in this arena during the 1980s, rampaging elephants were almost always shot and killed.

From the time he was young, Sarma considered elephants his friends, and he wanted to save them. During his 30-year career, he’s saved 139 musth bulls, and he’s treated more than 10,000 elephants for infection, injury, and disease. In addition to his private practice and rescue work on behalf of the Indian government, he teaches the next generation of veterinarians at the College of Veterinary Science in Guwahati, Assam.

Sarma’s love for elephants and drive to care for them is the subject of a new book for young readers, The Elephant Doctor of India (2021, Chicago Review Press, 166 pages, $19.99), by Janie Chodosh, an instructor of ecology and environmental science at Santa Fe Community College. Chodosh reads from and discusses her book in an illustrated Zoom presentation at 2 p.m. on Tuesday, April 27, hosted by SFCC.

“When I pitched the book, I said Dr. Sarma is Dr. Doolittle meets Jane Goodall meets Indiana Jones,” Chodosh says. “I want to inspire younger people to care. But, if you love elephants, I think it’s readable for an older audience. It’s not a picture book.”

Indeed, The Elephant Doctor of India is a richly detailed narrative about a man who has dedicated his life to saving endangered animals that nonetheless pose great risks to humans. The book is a joyous trek through Assam, where Chodosh spent three weeks with Sarma in 2016. It’s also a handy reference guide to Asian elephants that includes a glossary of terms and chapters on elephant history, biology, and ecology. Despite the age of her target audience (10- to 13-year-olds), Chodosh doesn’t shy away from potentially squeamish medical moments, scenes of danger, and even instances of great loss and sadness.

“I don’t ever dumb-down for readers,” she says. “I think kids can handle it.”

Chodosh holds a master’s in environmental science from the University of Montana. Prior to Santa Fe Community College, she taught at Agua Fria Elementary School and worked at the Randall Davey Audubon Center. Her first book is Wild Lives: Leading Conservationists on the Animals and the Planet They Love (2017), and she also writes young adult fiction. A former colleague from the Montana Natural History Center contacted Chodosh in 2016 to see if she’d be interested in writing about conservation biology work in Assam. “It took me about a second to say yes,” she says.

She started researching, looking for a way into a topic with many angles. She learned that 10 percent of the world’s wild Asian elephants live in Assam, as well as about 1,200 captive ones. Her colleague told her about Sarma, whose work helps conserve the elephant population. She met him in North Carolina, where he was lecturing, and knew she’d found her subject. “He’s the warmest guy, biggest personality, talking and talking, sharing with me.”

The Elephant Doctor of India opens with 8-year-old Sarma sitting on an elephant, named Lakshmi, as she grazes. Her prickly hairs scratch his bare legs, but he doesn’t care. Sarma’s family ran a farm in the village of Barma, and Lakshmi’s owner boarded her on their land when she wasn’t working as a logging elephant.

“When the boy and the elephant reached the orchard, Lakshmi grazed on her favorite foods,” Chodosh writes. “Besides tara grasses, she loved banana stems and bamboo leaves. KK marveled at how she never grew tired of eating. Like all adult elephants, she fed for up to 18 hours a day, consuming 500 pounds of vegetation.”

Lakshmi died of an infection a few years later. The grieving little boy wanted to learn how to make elephants well again, so he dedicated himself to schoolwork and pursued a career in veterinary medicine. Chodosh enriches his story with numerous, seemingly minor details, such as the hard wooden bench upon which Sarma sat with two other students, to take his college entrance exam. She asked him endless questions as she and her husband drove around Assam with him, visiting nature preserves and health centers.

“I was constantly, like, How much can I bug him? Asking him the randomest questions, every detail.”

They visited a healthcare clinic in Orang National Park, located in the Darrang and Sonitpur districts of Assam, where Sarma administered vaccines. Chodosh described a line of more than 20 camp elephants and their handlers (called mahouts), all standing in a row, waiting for treatment. She was able to get up close and interact. “I wanted to snuggle the elephants,” she says. “They’re so curious and affectionate. You can’t approach the males as much, but the females — you can touch their faces.”

Elephants weigh up to four tons and can reach nine feet in height. Their sheer size makes it easy for them to hurt a human by accident. (Chodosh had her foot stomped by a younger elephant at the healthcare clinic.) Bulls in musth present the most acute risk because the excess testosterone makes them violent and prone to attack. Trying to subdue them is extremely dangerous.

“[The elephant] kept charging straight ahead. Dr. Sarma didn’t wait to see what would happen. He had to get away, and he had to find the others,” Chodosh writes in a tense chapter. “He didn’t even catch his breath before he started running again. He dodged branches and vines, sprinting to the west, down a hill, until he crossed some barbed wire that separated the forest from a tea estate.”

A close relative of Sarma’s loses his life, and the elephant must be put down. This is what it means to live in close proximity to wild animals: Even when they’re trained to work for humans, they remain unpredictable and largely beyond our control. Despite the risks, Sarma, 60, persists. His work is about more than health care, Chodosh says. It’s a calling. He shares an authentic bond of love with the elephants.

For instance, she tells the story of Lokhimai, an elephant Sarma spent weeks treating for an abscess in 2002. In 2016, he was examining some circus elephants to make sure they were being properly treated and cared for when one of them wrapped her trunk around his shoulders. Though others feared this was an act of aggression, Sarma knew it was affection.

“It was as if she knew him somehow, as if she understood the language he was speaking — as if they were friends,” Chodosh writes. He had a feeling he’d met this elephant before, so he checked her medical records and discovered she was the same Lokhimai he’d treated many years earlier.

In 2020, Sarma was awarded the Padma Shri, one of India’s highest civilian honors, for his work. “I am the happiest when I am around elephants,” he told BBC News in October. “In addition to feeding them, I communicate with them through signs. Now, most of the elephants [in Assam] recognize me.”

Chodosh has no doubt this is true. “He’s a scientist,” she says. “That he can ascribe these emotions to an animal tells me that it’s not just woo-woo that animals have love and consciousness.” ◀