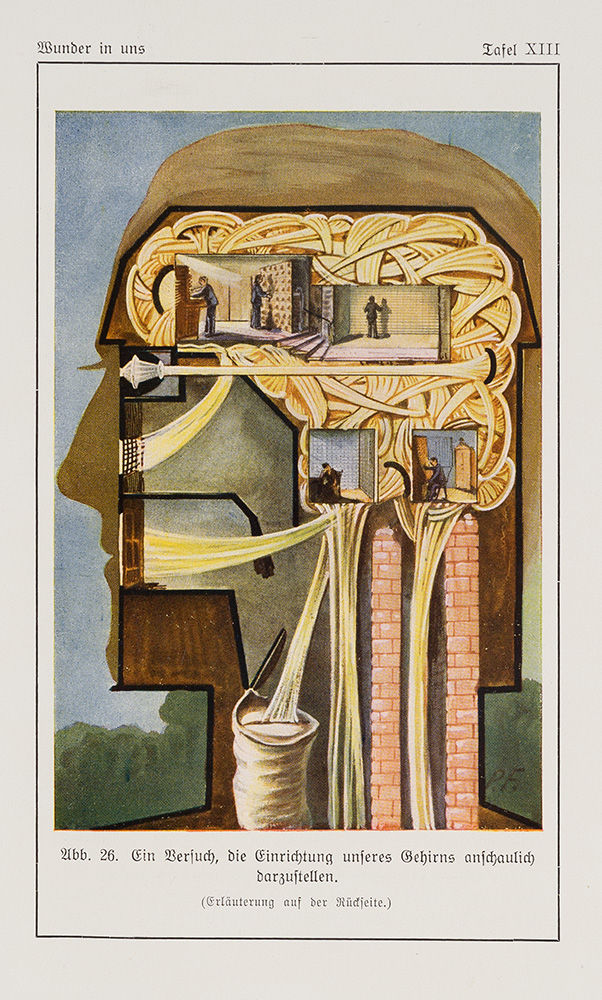 The model for Der Mensch als Industriepalast, from "A Look into Headquarters," Pictured Knowledge, 1917, colorized and redrawn by Paul Flanerky, in Wunder in Uns (2nd edition, 1923), plate 13, National Library of Medicine 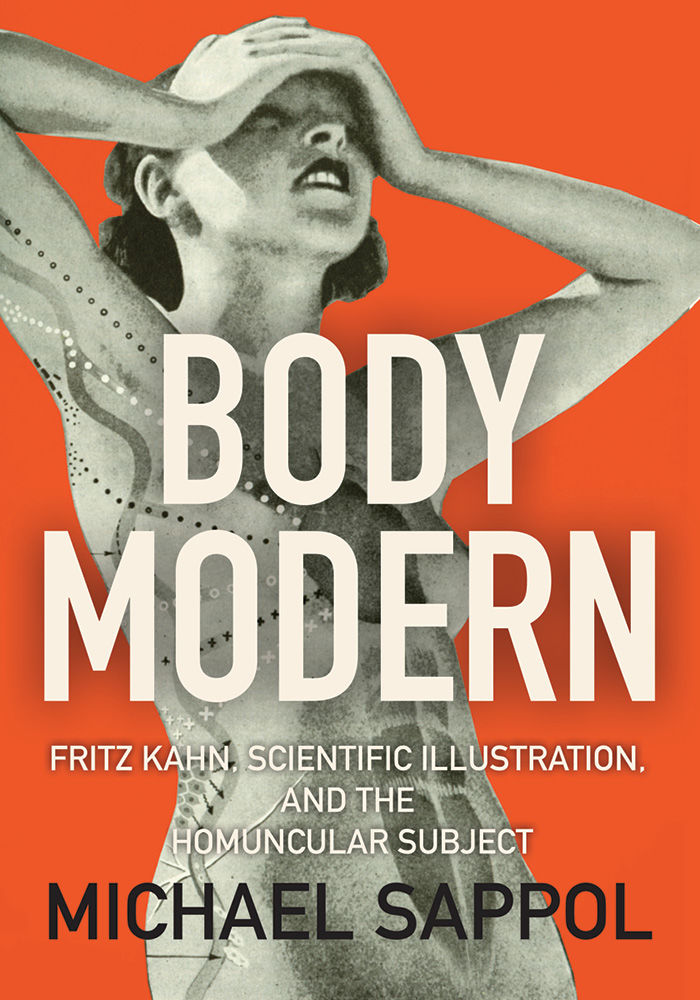 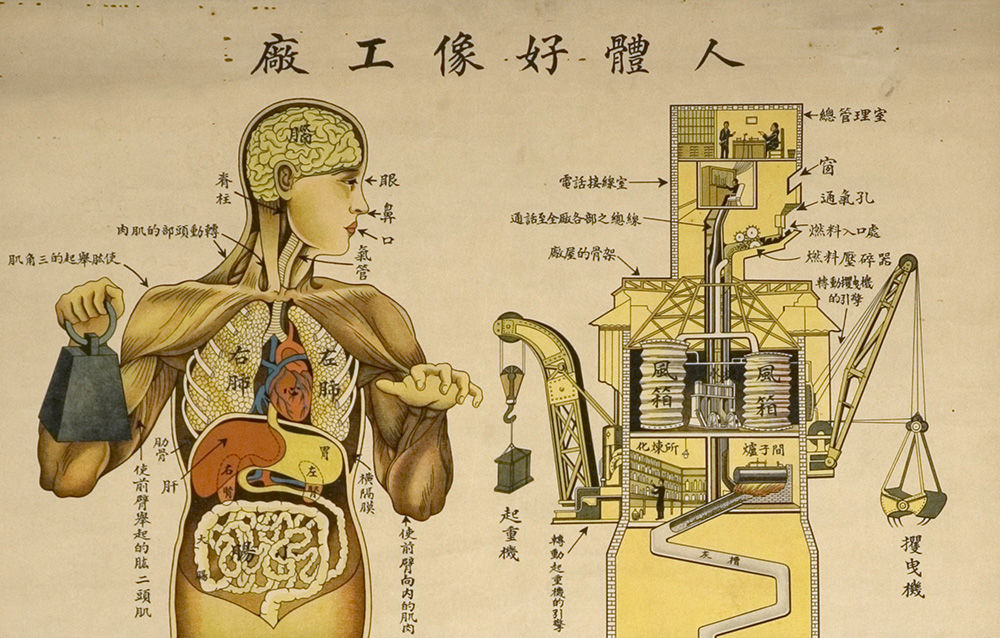 The model for Der Mensch als Industriepalast, from "A Look into Headquarters," Pictured Knowledge, 1917, colorized and redrawn by Paul Flanerky, in Wunder in Uns (2nd edition, 1923), plate 13, National Library of Medicine

When you are felled by chest congestion and seek a remedy, chances are your mind conjures a gaggle of blobby little green men who represent mucus and might serve as spokespeople for the decongestant Mucinex. The hideous yet adorable creatures appear in television commercials as something like frenemies of the sick — unwanted guests who set up camp in your body and also explain your illness to you in gravelly Teamster voices. It might be more accurate to call these animated characters “spokes-homunculi.” Homunculi is the plural of homunculus, which is a big word for any very small humanoid creature, and artistic renderings of such beings have historically made their way into scientific and medical illustrations.

Fritz Kahn (1888-1968), a German Jewish physician and popular science writer, embraced the metaphor of the homunculus as an educational and artistic tool. Kahn produced numerous pamphlets and books filled with images that depict the body as a mechanized factory. His ideas and longstanding influence on design and pharmaceutical marketing continue to pervade visual culture. Kahn’s projections influenced instructional filmstrips about hygiene and disease made for schoolchildren and military recruits during the middle part of the 20th century, as well as modern-day infographics and internet memes. Michael Sappol, a fellow at the Swedish Collegium for Advanced Study in Uppsala, addresses Khan’s legacy from an historical and philosophical point of view in the recent book Body Modern: Fritz Kahn, Scientific Illustration, and the Homuncular Subject, published by the University of Minnesota Press.

Kahn was born in Halle an der Saale, Germany, to mother Hedwig and father Arthur, a doctor and author. The family lived in Hoboken, New Jersey, and then Manhattan when Kahn was young, but in 1895 he returned to Germany with his mother. Kahn studied medicine at the University of Berlin, and from 1914 to 1922 he worked as a surgeon, gynecologist, and obstetrical aide at a clinic; he served as a medic in World War I. In the 1930s he moved to Palestine and later to France, but when World War II broke out he was interred there as an enemy alien. Once released, he made his way back to Manhattan by way of Spain and Portugal. “Kahn was a diasporic Jew,” Sappol writes. “He grew up in Germany and the United States; he lived more than half his life outside Germany. Like every member of the Jewish diaspora, he faced in two directions … He thought of himself as the issue of an ancient race and a faithful upholder of its ancient traditions. Yet in his medical and scientific writings, he was a tireless exponent of everything modern.”

Sappol distinguishes between modernists as modernizers and modernizers who were not necessarily modernists. Kahn is more of a modernizer, intent on helping the masses understand scientific advancement and knowledge. He is not a modernist, as his tone tended to be inconsistent, and he often relied on old-fashioned aesthetics to convey space-age ideas that would be nearly unreadable to today’s audiences. In Kahn’s schematics, muscles, nerve bundles, digestive processes, and other concepts are projected outside of the body into a negative space, or into the stories of a building, their functions explained in meaty captions (which are not translated from the German in Body Modern). Without captions, Sappol maintains, they are more akin to works of art than useful scientific illustrations.

Though he is often assumed to have created all images that came out under his name, Kahn himself was not an artist but an idea man who had illustrators and designers carry out his concepts. He rarely gave them any credit. Sappol focuses on this aspect of his business practices in some detail, emphasizing that there were many other artists, some of whom he names and some of whom are lost to history, whose work falls under the Kahn umbrella. “In exile (and against the Nazi expropriation of his images), Kahn had a vested interest in asserting his intellectual authorship and property rights,” Sappol writes. “Transplanted to America, he needed to be recognized as the ‘gifted inventor’ ... of the conceptual scientific image and the custodian of the popular medical imagination.”

Kahn’s most famous illustration, Der Mensch als Industriepalast (Man as Industrial Palace), which shows a cut-away of a human body in profile, populated by homunculi working the various systems like factory employees, was actually a collaboration with Fritz Schüler, who was never credited. It first appeared in Kahn’s book Das Leben des Menschen 3, published in 1926. When considering the body as a collection of mechanical entities running on the labor of little men, and in light of the uncredited artists who toiled for long hours on someone else’s ideas, it is easy to compare these concepts to the vision of a 21st-century open-plan tech startup filled with underpaid millennials coding late into the night. In this way, Der Mensch is both preciously vintage and a timeless fantasy of worker productivity that speaks in equal measure to capitalism or communism. At the time, Der Mensch spoke strongly to the eugenic impulses of Nazi social engineering, which may be why the Nazis appropriated many of Kahn’s images — after he had left Germany — to use in their own propaganda as they aligned themselves with modernism in service of their brand of eugenics. Under the direction of the Nazi regime, Franckh’she Verlagshandlung (known as Franckh), the imprint responsible for many of Kahn’s books, took the German rights to Kahn’s words and images and retained possession of all original artwork. Over the years, images produced by Kahn and his artists have been so widely distributed, reproduced, and reinterpreted around the world that his influence shows up everywhere from vitamin commercials to Tom & Jerry cartoons — really, anywhere a visual metaphor is needed to explain the inner workings of man.

Body Modern is densely academic yet provocative enough for a lay person to extract some meaning, as Sappol moves fluidly from explorations of modernity to Kahn’s biography, to artistic and social critique, and finally to a meditation on the unified self. “I would start with the proposition that human consciousness is socially distributed, constituted, and performed, and not just an emergent effect of a biologically programmed individual psychoneurological growth cycle,” Sappol writes. “A second premise: human consciousness and identity are fundamentally divided.” The author makes this statement at the very end of Body Modern — the book’s entirety having been a set-up for a larger point: “We come to believe that we have unified selves through a dialogical interactive process. The unified self — the ‘I’ effect — is produced by naming, registration, marking practices, laws, parenting actions, governmental regulations, and image production, all working to shape familial, legal, and peer expectations that the individual must be the bearer of a stable, bound identity.”

Sappol loads quite a philosophical burden onto the shoulders of the homunculus — a man and the idea of a man, both with jobs to do. Sappol notes throughout Body Modern that the images Kahn presented were often less technologically cutting edge than they were simply surreal. And from Sappol’s writing, we understand that the homunculus was just as often conceptual as it was literal. “This book is about how images cast their spell, how technologies shape the mode and content of images, and how people use images and images use people,” he writes. “In the twentieth century, there was a politics of text versus image: debates over the social meaning, moral effects, desirability, instrumental uses, and control of images. That politics, I argue, was all about how to get modern. Fritz Kahn was an impresario of the modern.” ◀

“Body Modern: Fritz Kahn, Scientific Illustration, and the Homuncular Subject” by Michael Sappol ispublished by the University of Minnesota Press.

Fritz Kahn's most famous illustration shows a cutaway of a human body in profile, populated by homunculi working the various systems like factory employees.