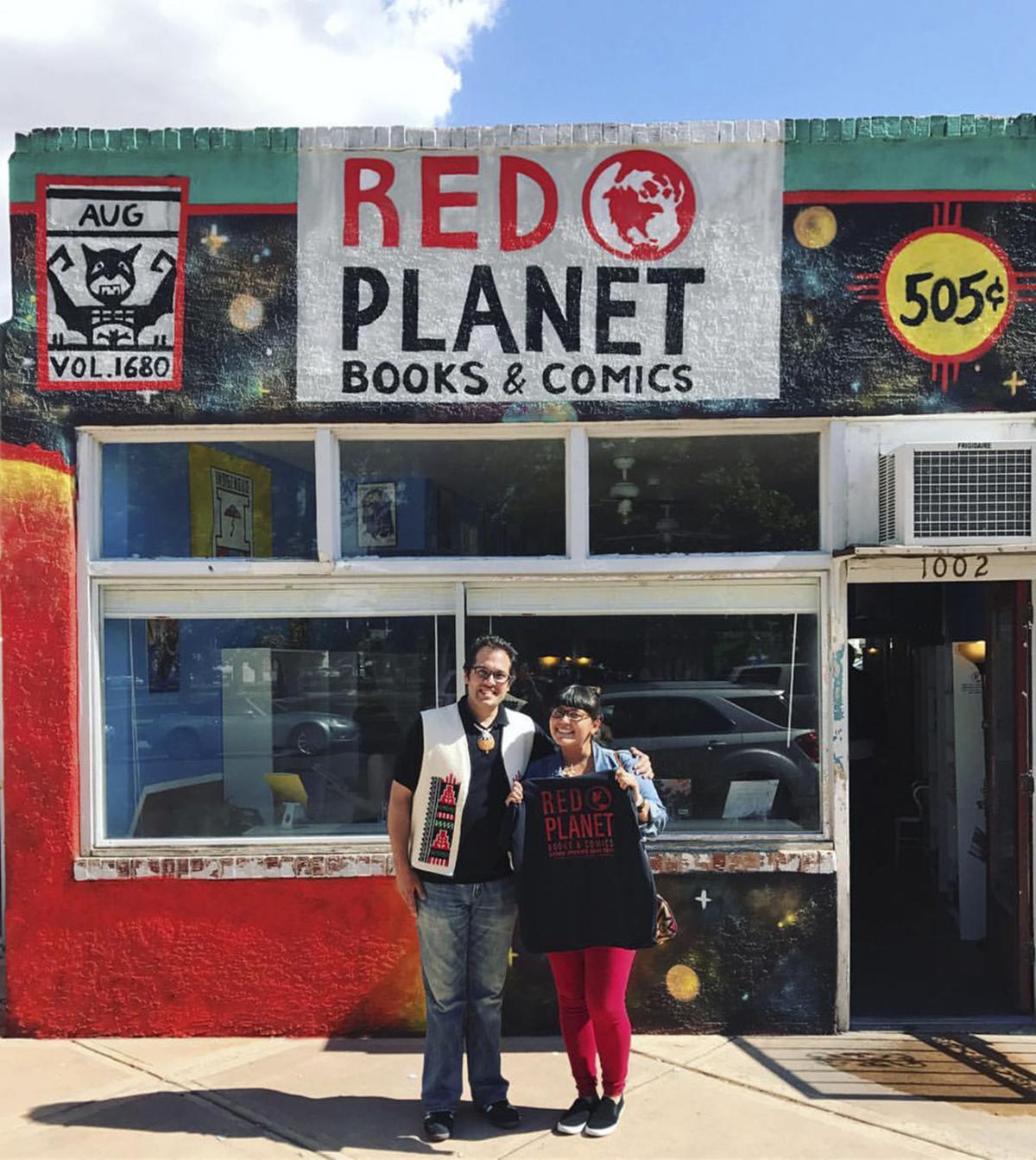 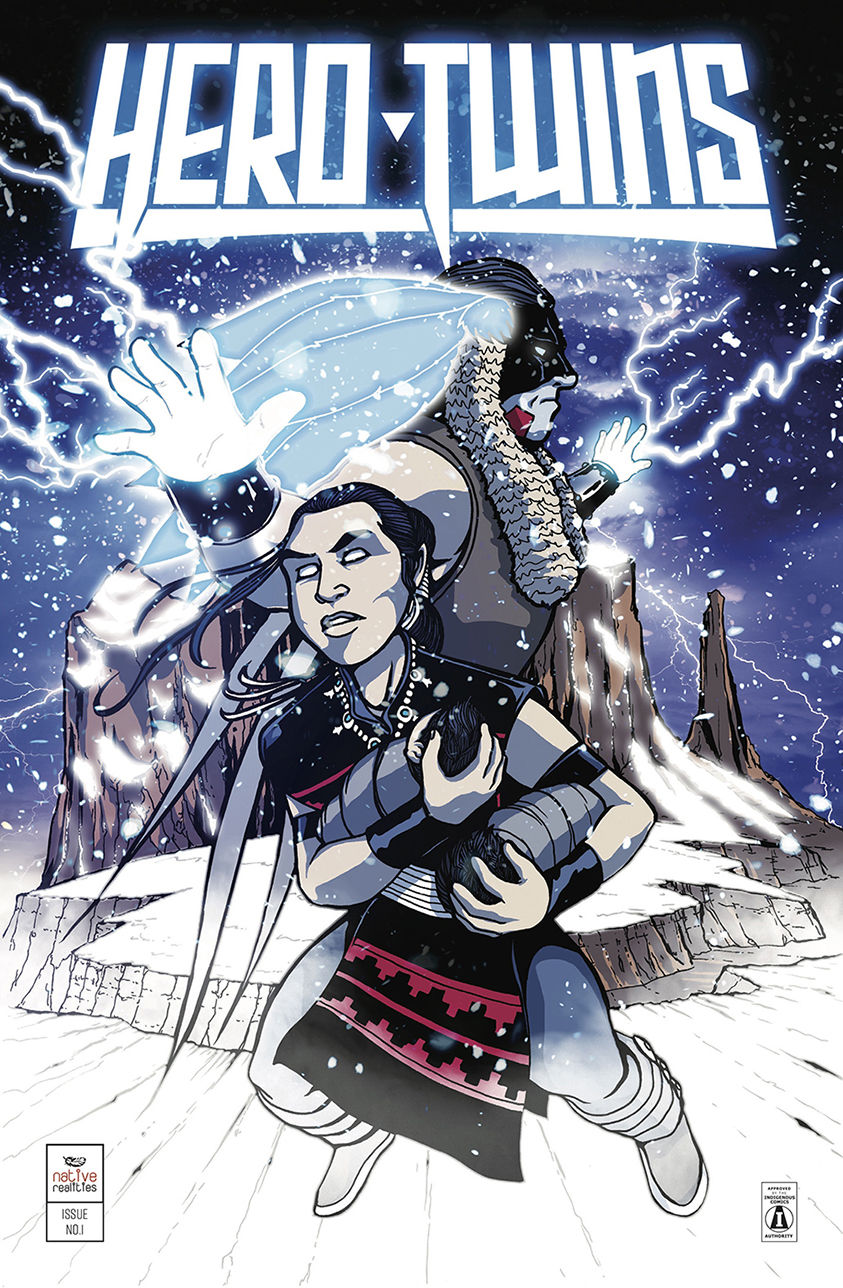 An issue of Hero Twins by Dale Deforest (Navajo)

An issue of Hero Twins by Dale Deforest (Navajo)

Lee Francis IV is good at firsts. In 2015, the publisher started Native Realities Press, the country’s first publishing house devoted exclusively to Native American comics and graphic novels. The next year, the Laguna Pueblo tribal member, who earned a Ph.D. from Texas State University, launched Indigenous Comic Con, an Albuquerque-based event that was the first comic convention devoted to the alternative universe of Native American-created comics.

Last June, he opened Red Planet Books & Comics, a block off Central Avenue, in the west downtown area of Albuquerque. While there are bookstores devoted to Native American literature, this is the first whose shelves are lined largely with indigenous comics and games. Housed in a former beauty salon, the 800-square-foot space has a hand-painted storefront that looks like a comic-book cover, down to a New Mexico-based insignia that reads, “505¢.”

“We wanted a taproot, a place that was both an office space and a place to showcase work, not just once a year at Indigenous Comic Con,” Francis said. “We carry comics, we carry kids’ books. There’s a gaming area. And we also carry traditional books by Native authors. The store is divided in a comics section and books section. As long as it’s Native, we carry it.” His own favorite titles include Super Indian, Tribal Force, The Hero Twins, and Kagagi. “All of these were created by Native folks and inspire me by their boldness and heroics.”

The back of the shop houses the shipping operation of Native Realities Press, putting Francis in an enviable position as a bookstore owner these days. “We’re not dependent on the bookstore’s revenues. I needed the space to ship books and not do it from the kitchen table in my house. It’s also a place where the staff can hang out.” Over its eight months of operation, the store has attracted a mix of tourists from other countries, area “Indigenerds” — as Francis lovingly refers to Native American comic-book fans — locals who read the rave reviews on Yelp, and a gaggle of young students who are some of his most regular customers. “We’re right down the block from a middle school, so we also get lots of kids coming in who want to buy a comic for a dollar.”

One of the store’s most popular Native Realities titles is Tales of the Mighty Code Talkers. The book features nine original stories by different Native American comic-book artists, tracing the use of American Indian code talkers from World War I through the Korean War. (While the Navajo code talkers employed by the Marines in the Pacific theater of World War II are the most well known, Native code talkers were used in global conflicts spanning a half century.) Though the panels are illustrated and narrated in a lavish comic-book style, the book is aimed at an educator audience and includes a classroom lesson plan.

Another bestseller isn’t a book but a game: Cards Against Colonialism (the latest version of the game is called Cards for Decolonization). Based on the same concept as the fringe gallows-humor game Cards Against Humanity, it riffs on aspects of Native culture, reservation life, social stereotypes, and shared customs. By putting stereotypes on the table, the game is meant to provoke earnest conversation about decolonization and American Indian history.

Then there’s the matter of the bookstore’s name — Red Planet Books & Comics. “It’s something of a double entendre,” Francis said, with “red planet” referring both to Mars and Native American lands.

The bookstore, which is usually open seven days a week, closes for a few days each November so Francis and his staff can focus on the event that in many way made this store possible — Indigenous Comic Con. Now entering its third year (and its second at the Isleta Resort & Casino in Albuquerque), the convention is a showcase for Native American comic-book and sci-fi and fantasy culture, featuring cosplay, maker workshops, panels with comic creators, and a slew of Native American celebrity guests from the entertainment industry.

Like its bookstore counterpart, Indigenous Comic Con isn’t merely an event for people who are looking for a Native take on Star Wars memes. Rather, it stretches beyond its fans’ love of the genre to be something of a social movement, which places a moral premium on the creation of Native characters who are neither ignored nor sidelined as exotic scene-setters. More often than not, the point is about telling neglected Native American narratives — historical and contemporary, reservation and urban — through the illustrated medium of comic books. Ultimately, it’s about Native writers and artists reclaiming their own cultural stories, instead of having them narrated or appropriated by creators who have little to no connection to their tribal culture.

It’s also why Francis wields a firm hand in keeping certain books out of his shop. As he mentioned in an interview with Indian Country Today last year, he refuses to sell the comic-book series Scalped, which was turned into a TV pilot for WGN America. Built around a fictional Oglala Lakota reservation town in South Dakota, the series’ Native American characters are involved with organized crime, tribal casino vices, and drug addiction. “We don’t carry anything in the shop that represents Native folks in a negative way,” Francis said. “Violence and abuse toward Native people, unless they are in the ability to hold their own, is off-limits for us as well. We also don’t carry work where the Native is a sidekick or prop in a non-Native story. We only want books and comics that portray Native people as authentic, dynamic, and inspirational.”

His own press pushes forward that mission. In its two years of existence, Francis said Native Realities has published 10 titles. “Our customer base is all over the world. We ship to Germany, Denmark, and Canada, and have orders from all 50 states.”

Later this year, the press will release its long-awaited anthology, Deer Woman, a series of comic-book stories built around the struggles of indigenous women in North America. The book includes self-defense techniques from the Arming Sisters, a Native American women’s self-defense group. Native Realities will also release the second and third volumes of The Hero Twins, built around the Navajo mythology of monster-slaying twin brothers.

"We don't carry anything in the shop that represents Native folks in a negative way." — owner Lee Francis IV