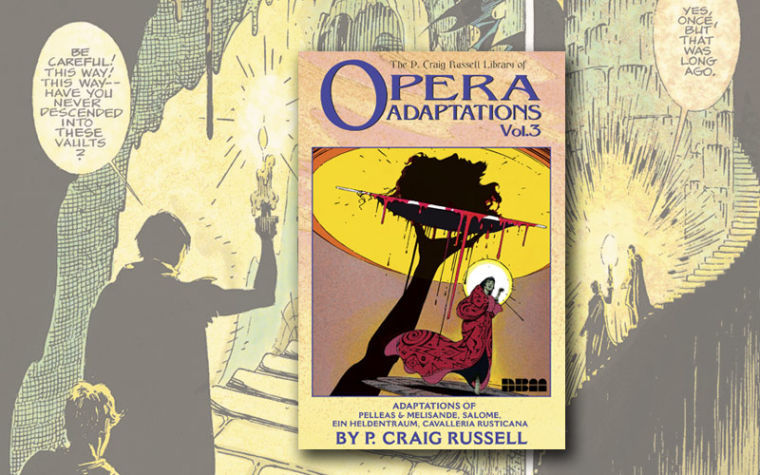 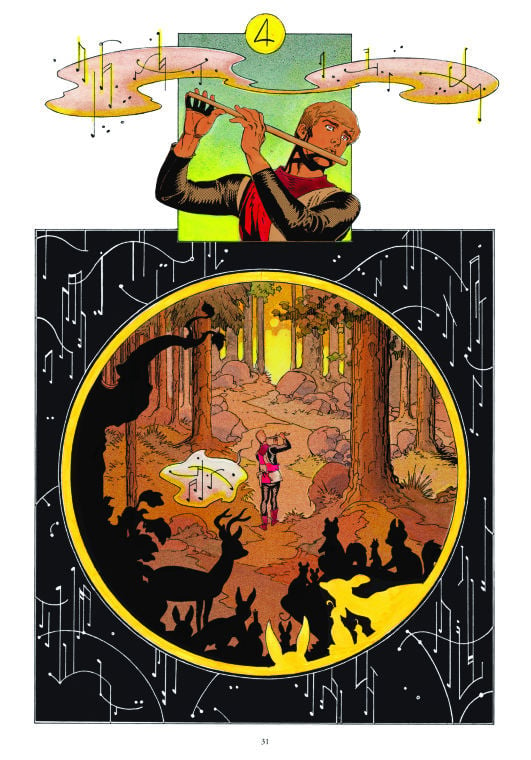 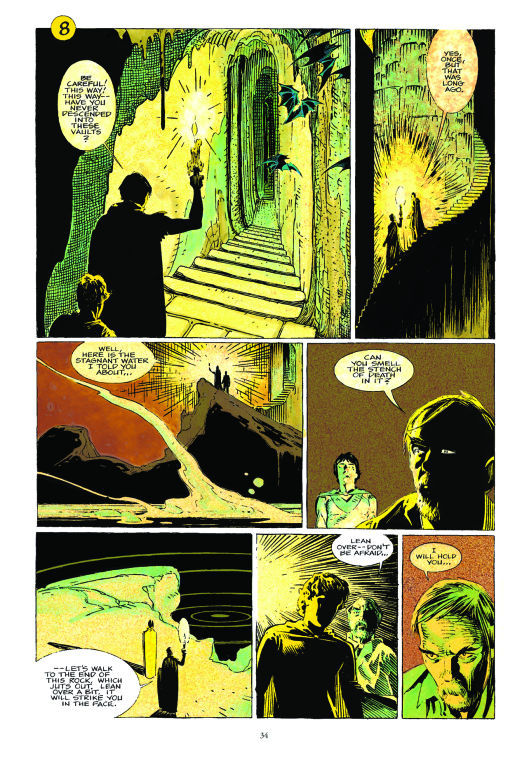 It's as dramatic a portrayal of Pagliacci as you’ve seen, despite the fact that there’s no music. The askew playbill image of the clown — leaning on his drum, his right hand clutching a formidable stick, a single painted tear falling from one of his eyes — is pinned by a deeply plunged, blood-releasing dagger. The drawing calls up at once the tragedy of Ruggero Leoncavallo’s familiar opera, but it carries something more: the graphic terror of horror comics.

Welcome to The P. Craig Russell Library of Opera Adaptations, a three-volume collection of the respected graphic illustrator’s takes on operatic stories. Recently reissued by graphic-arts publisher NBM, the books reflect not only Russell’s classic-comic and illustration influences but also his love of story and music. Done over a period of some 30 years, the volumes include, in addition to I Pagliacci, adaptations of Parsifal, Ariane and Bluebeard, and Pelléas et Mélisande, with illustrations of lyrics to songs by Gustav Mahler and Hugo Wolf. One volume is dedicated to Mozart’s The Magic Flute. Volume 3, which includes a Godfather-influenced reading of Mascagni’s Cavalleria Rusticana, sports a cover that shows Salome dancing as a shadowy arm lifts a bloody platter bearing the head of Jochanaan.

Russell, who’s also done a hard-to-find four-volume adaptation of Wagner’s Ring of the Nibelung for Dark Horse comics, credits dual interests in music and drawing for the operatic side of his career. “I was into classical music from kindergarten on,” he told Pasatiempo. “The music was dramatic and wonderful fun. It always made sense to me. I took piano lessons and checked out all the classical records from the library I could get.” But he wasn’t so much into opera as a kid. “I had two [operatic] records when I was in junior high: Andre Kostelanetz conducting highlights from Aida and Kostelanetz doing orchestral music from Carmen.”

His entry into comic drawing was exceptionally fortuitous. His father, who owned a shoe store in Russell’s hometown of Wellsville, Ohio, needed someone to do an advertisement and heard of an artist that had just moved back from New York. That artist was comic illustrator Dan Adkins, who had worked on the now-classic comics Creepy and Eerie as well as Marvel’s Doctor Strange. Adkins wasn’t interested in doing his father’s advertisement, but was interested to hear that he had a 19-year-old son who was studying art and had 8,000 comics in his attic. Adkins hired Russell as part of his inking and coloring team, promising him he could get him into the Marvel family. In 1976, Russell did his own rendition of Doctor Strange for Marvel after contributing to Marvel’s popular Amazing Adventures series.

While living in New York City in the early 1970s, Russell was approached by a childhood friend, Patrick Mason, now a professor of voice at the University of Colorado in Boulder, with a project. “He’d written an adaptation of Parsifal for comics. I was always looking for a good story to illustrate, and I was listening to opera. It was a natural thing to do.” Russell’s first opera project benefited from the rise of “ground-level” comics, the independent comics movement that bridged the gap between commercial comic companies including Marvel and DC and the underground, adult comics of the day. One of the leading ground-level publishers, Star*Reach, published Parsifal, and Russell was on his way.

Russell has stayed away from contemporary operas for licensing and copyright reasons. And not all operas, he said, are suitable for graphic-novel adaptation. “Some operas survive on the beauty of their music. To work as graphic novels they must have good librettos. Some [operas] are just too silly. They have to have something literary to work with, something to play with.” Russell’s adaptations stay generally true to the story lines, though their panel serialization necessitates some liberties with the text. Their staging can be quite a bit more fantastic than what’s seen in the theater. Russell takes advantage of the graphic format to construct strong, detailed backgrounds. The adaptations are drawn in a finely lined classic style that might be compared to Al Foster’s Prince Valiant by some readers. His take on Ariane and Bluebeard, Paul Dukas’ opera based on a poem by Maurice Maeterlinck, makes full use of its characters’ symbolic representation, contrasting light and flames with somber shadows. The Clowns (I Pagliacci), done in black-and-white, begins onstage before moving into the world of the opera and then back to the theater. The Godfather’s Code (Cavalleria Rusticana) is directly drawn with little background, its emphasis on portraiture. Parsifal and The Magic Flute contain surreal settings and sweeping landscapes that suggest fantasy comics.

Russell acknowledges the Danish illustrator Kay Nielsen, who participated in the making of Disney’s Fantasia, as an influence. An even bigger influence was the American artist Eyvind Earle, who contributed backgrounds to Disney’s Sleeping Beauty. “I saw that when it first came out, and it had a profound influence on me. It was like a history lesson. Earle’s influence was medieval painting and Persian art, and those square trees and sharp angles in [Sleeping Beauty’s] forest just captured me. I’ve probably consciously tried to draw like him more times than I’ll admit.”

In addition to his occasional work for Marvel and DC — he did Batman: Hothouse in 1992 — Russell is known for his fantasy-based Elric series (based on the tales of English novelist Michael Moorcock), done for a number of publishers, as well as graphic-novel treatments of Oscar Wilde’s fairy tales. More recently he has collaborated with novelist Neil Gaiman on a number of Gaiman’s Sandman stories as well as illustrating Gaiman’s popular children’s book, Coraline. He’s just completed the cover for Gaiman’s Murder Mysteries, which can be seen at his website, www.artofpcraigrussell.com. In the manner of a true music lover, Russell has given each of his works an opus number, a list starting in 1973 and ending last year with 67 entries. Parsifal is Opus No. 5, “The Godfather’s Code” is Opus No. 58.

Does he still play piano? “It’s my fallback career,” he laughed. ◀

The three volumes of “The P. Craig Russell Library of Opera Adaptations” are published by NBM.

P. Craig Russell takes advantage of the graphic format to construct strong, detailed backgrounds for his illustrated opera adaptations. The adaptations are drawn in a finely timed classic style that might be compared to Al Foster’s ‘Prince Valiant.’