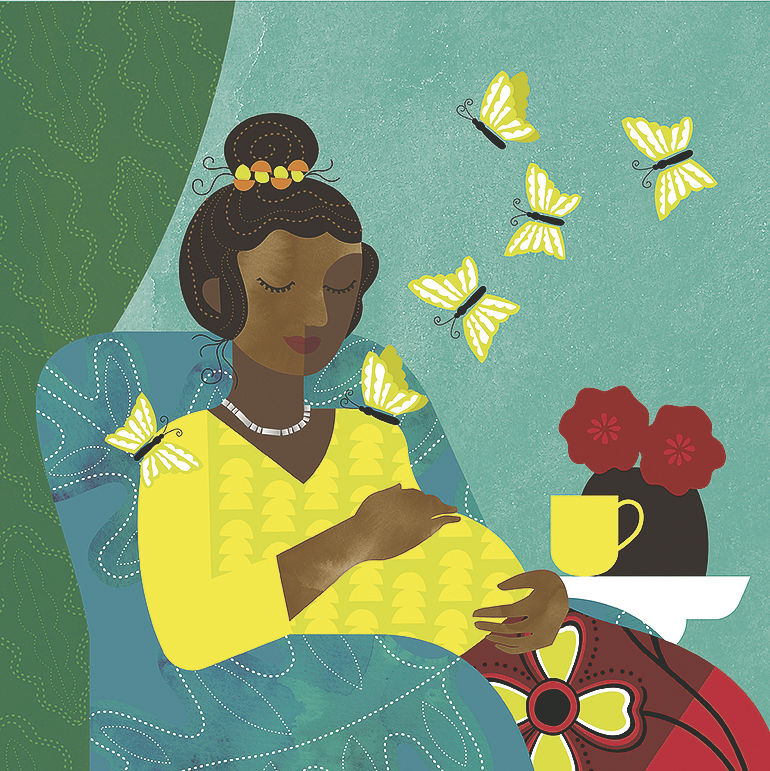 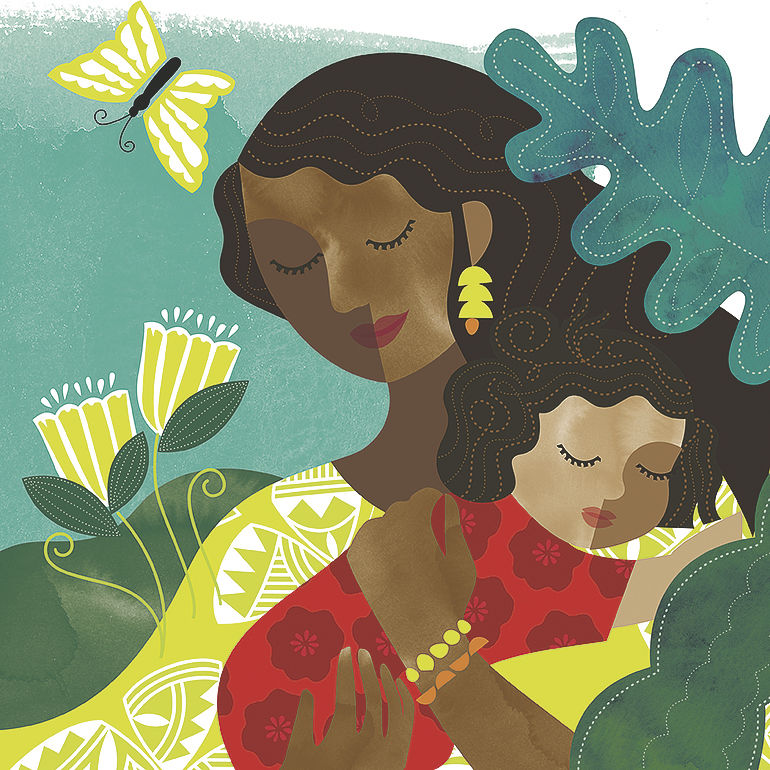 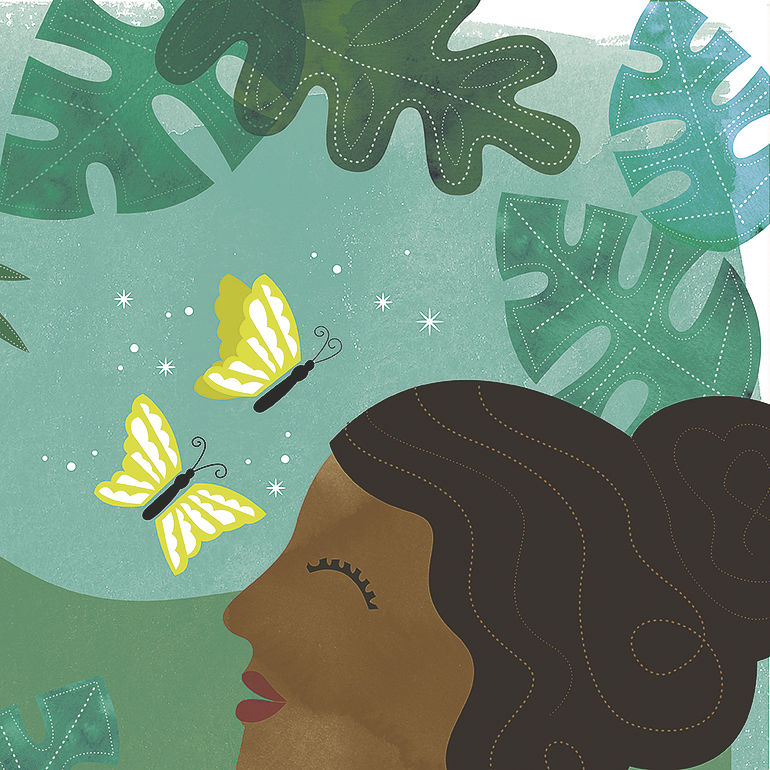 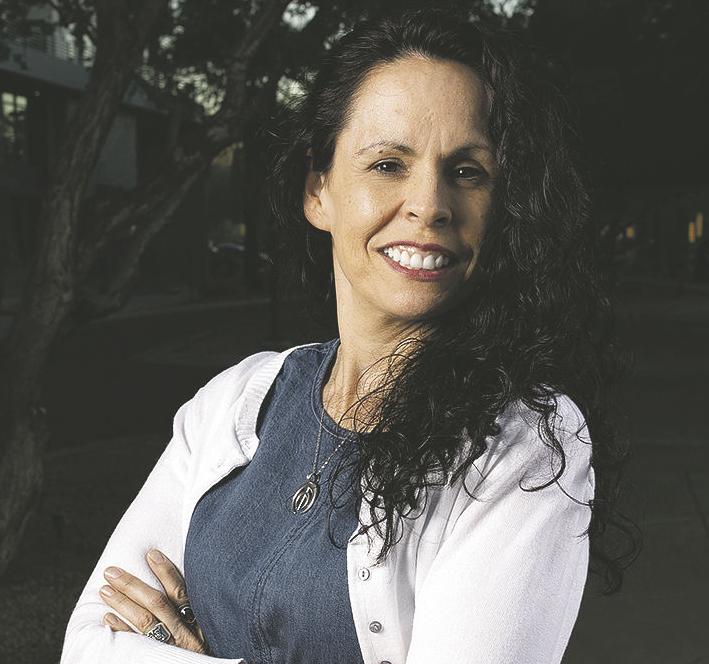 will you carry me,

when we go out to play,

and tell me just one story,

as we walk along the way?

Colleen Farwell wrote these lines more than 20 years ago, when her first three children were young and she needed a writing sample to apply for a job at a local library. The poem continues with the mother assuring her child that she’ll always be there.

Little one, I will carry you,

So gently on my hip,

I will hold you a little tighter,

should you begin to slip.

As it turned out, the library wanted to know if she could write grants, not poetry. “But then I had this poem,” Farwell said. “I thought about submitting it to be published somewhere, but I never followed through.”

The poem sat in a drawer for a long time, as Farwell went on to have three more children and run a distribution company. Then, in 2014, Farwell reconnected with her old roommate from Dartmouth College, Tailinh Agoyo, a producer of Native art endeavors and mother of four. Agoyo decided to help shepherd Farwell’s words into book form. I Will Carry You, written and published by Farwell with illustrations by Eleanor Grosch, has its launch at We Are the Seeds, the arts-and-culture festival co-founded by Agoyo, which takes place on Thursday and Friday, Aug. 15 and 16.

At first glance, I Will Carry You seems like a pretty standard children’s picture book: a simple story of love and devotion with warm, hand-stitched images of a mother and daughter that represent the stages of raising a child. But the story of the book’s production is one of a cross-country, intercultural collaboration between artists in multiple genres.

“I like that everything in the book is matriarchal,” said Loren Aragon, a fashion designer from Acoma Pueblo whose pottery-inspired butterfly designs appear in I Will Carry You. “The ladies that are putting this together are acting like mothers and looking out for more than just themselves. They’re actually living the idea of I Will Carry You.”

Agoyo and Farwell tried a few illustrators before settling on Grosch, to whom Agoyo was introduced by a mutual acquaintance. The three women worked together remotely, with Agoyo in Philadelphia, Farwell in upstate New York, and Grosch in Florida. Grosch had never illustrated a children’s book before, but she had the style they were looking for. She understood that Farwell wanted the mother and daughter to be brown-skinned and to be surrounded by nature, and wanted the brightly colored pages to have a watercolor quality and appear almost as if they were quilted, rather than drawn. The only potential problem? Grosch is white and wasn’t entirely confident that she had the right background to do justice to Farwell’s vision.

Though neither Farwell’s childhood on the Crow Reservation in Montana nor her current residence near the St. Regis Mohawk Reservation are referenced specifically in I Will Carry You, she definitely wanted the book to reflect an indigenous identity and perspective. Instead of having Grosch attempt to create “indigenous-looking” elements from her imagination or rely on objects she could find in a museum, the collaborators decided to weave contemporary Native artists into the process.

Tchin, an award-winning artist from New Jersey (Blackfeet-Narragansett), who is also Agoyo’s father, provided jewelry design; the Spotted-Elk Collective, which specializes in Plains-style design and beadwork, offered sketches for beaded sneakers. Ojibwe beadwork artist and fashion designer Summer Peters sent designs for blankets, and the butterfly dress came from Aragon’s fashion brand, ACONAV. Grosch adapted the styles of the various submissions to fit into the visual world of I Will Carry You. The artists’ designs appear as jewelry, clothing, and blankets that the characters wear and use.

“I asked for a lot of guidance from the artists,” Grosch said. “I wanted 100 percent approval for how I interpreted their work.”

The collaboration extended even further when Agoyo and Aragon decided to have fabrics made based on the book’s illustrations to use for the We Are the Seeds fashion event on Friday, Aug. 16, which Aragon’s clothing label is producing.

Four fashion designers at the event, including Aragon and Peters, will showcase a number of looks from their lines, as well as garments created from the fabrics. The goal is for each designer to integrate the visual aesthetics and themes of the book with their individual point of view. Aragon’s usual style is hard-edged couture, he said, so it is a real challenge to work with something that feels summery and tropical — and to fulfill another aspect of the project, which is to create mother-and-child outfits. “I think this will help me expand on other ideas I’ve had of making some garments that are more wearable. This will be a more everyday kind of look,” he said.

Farwell will sell and sign copies of her book at Seeds. She said that when she first wrote the poem in I Will Carry You, she was a young mother who was thinking only of her babies. Now that she’s older, and some of her kids have reached adulthood, she knows that the sentiment of the book never goes away. “You always carry your children with you, on your hip or in your heart. Motherhood is universal. Every mother who picks up this book is going to feel the power of that. Native American is just who I am. I can’t separate it out. We’re human, just like everyone else. We love our children the way everyone loves their children,” she said, before going quiet and beginning to cry softly. After a moment, she continued.

“You look at these immigrant families that are being torn apart,” she said. “I think about it at night sometimes. I think about when my children were little and how they would get in bed with me, and how they smelled. To have that ripped from you is unforgivable. For me, this book reaches beyond all of that. It reaches beyond color, beyond class, and just speaks to the spirituality of motherhood and that feeling you have when you bring a life into this world.” ◀

▼ Colleen Farwell signs I Will Carry You

We Are the Seeds: Growing Native art