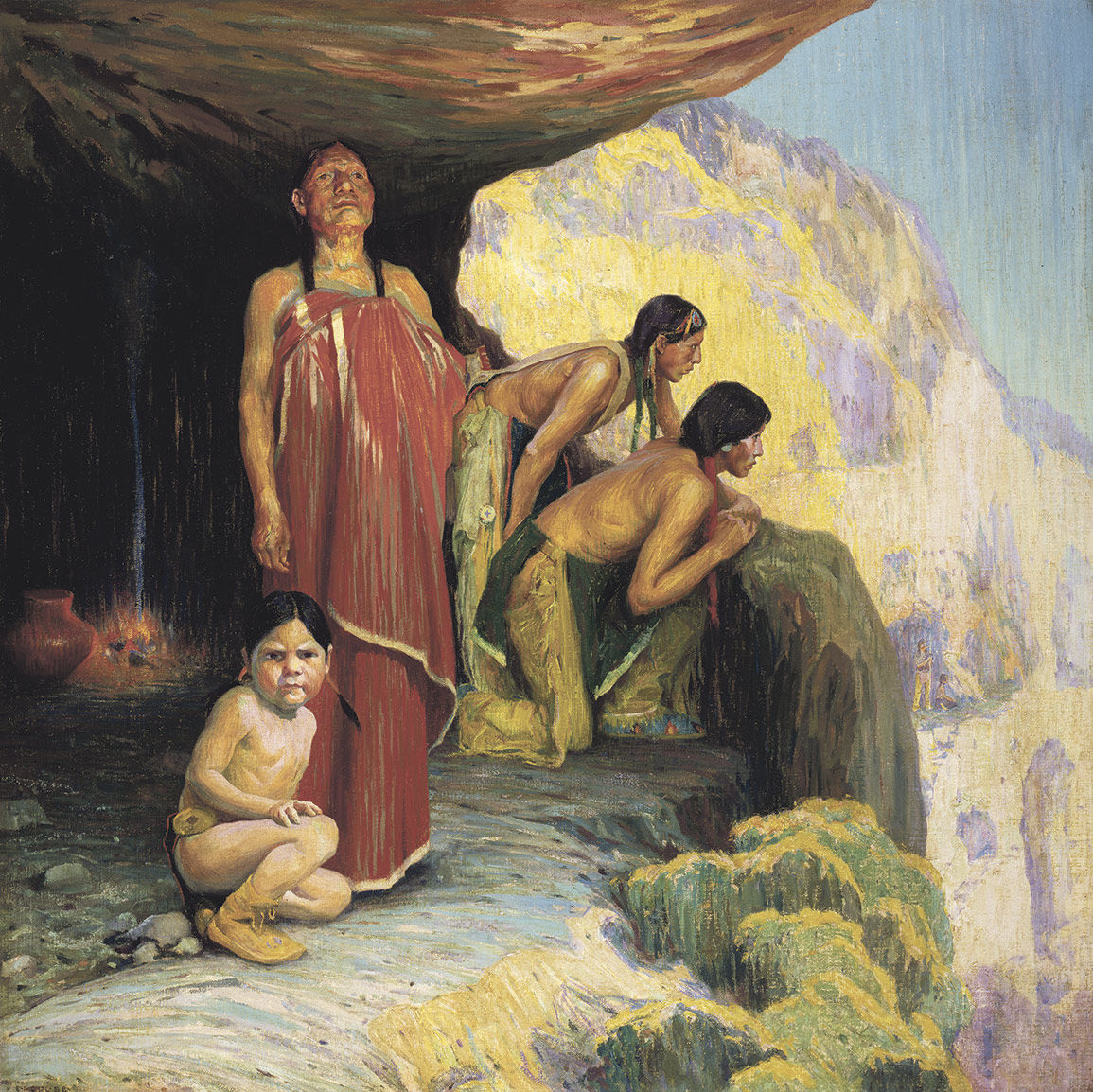 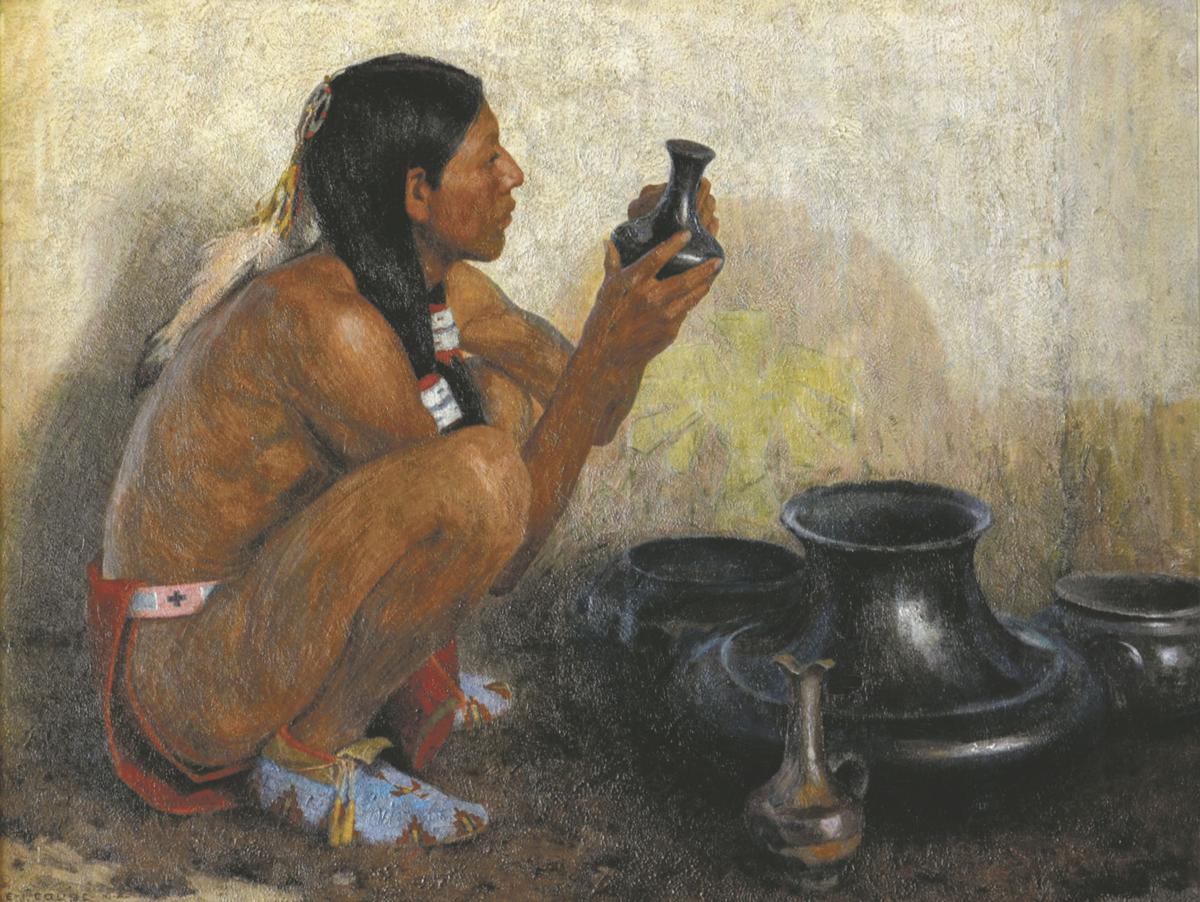 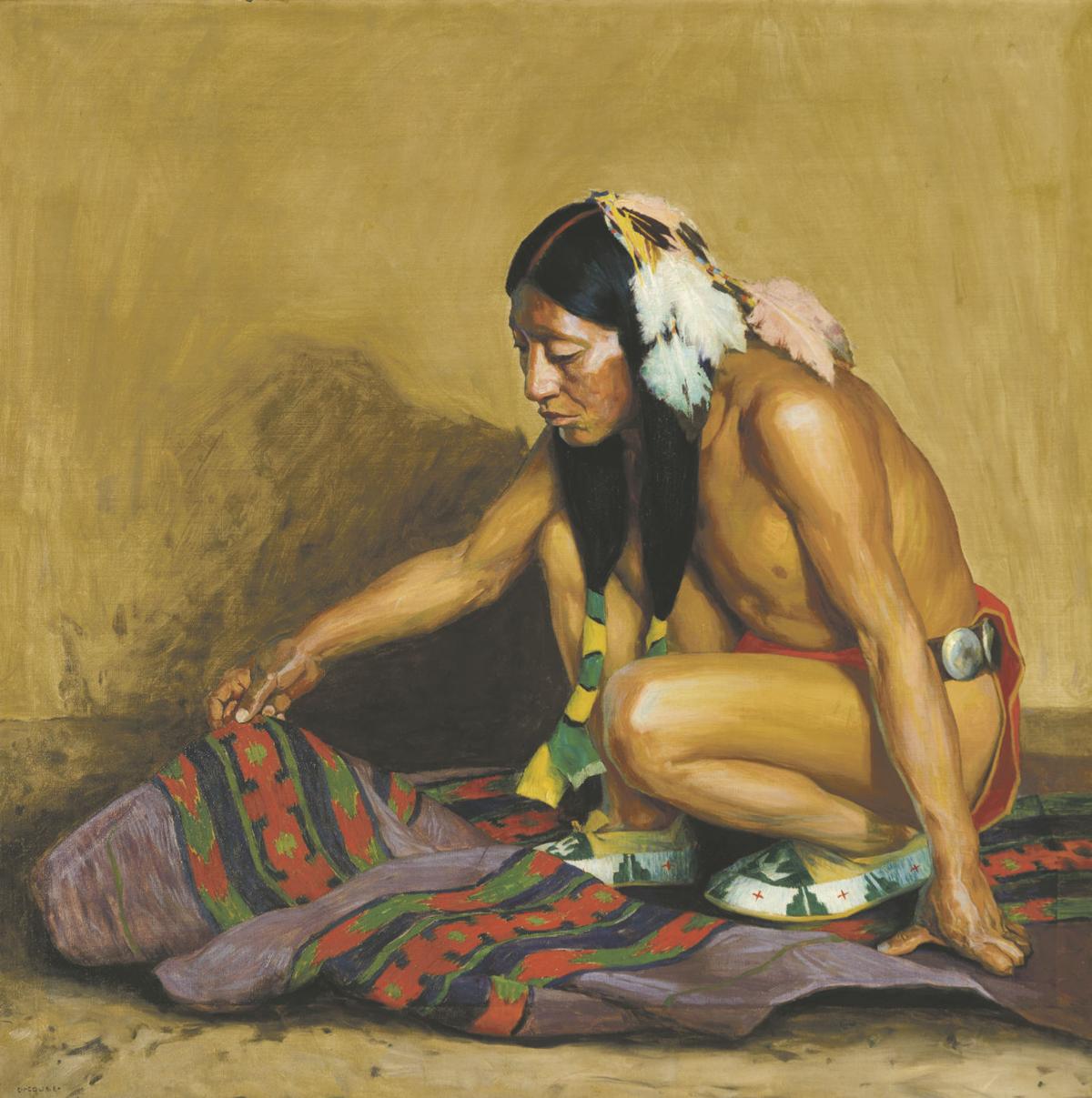 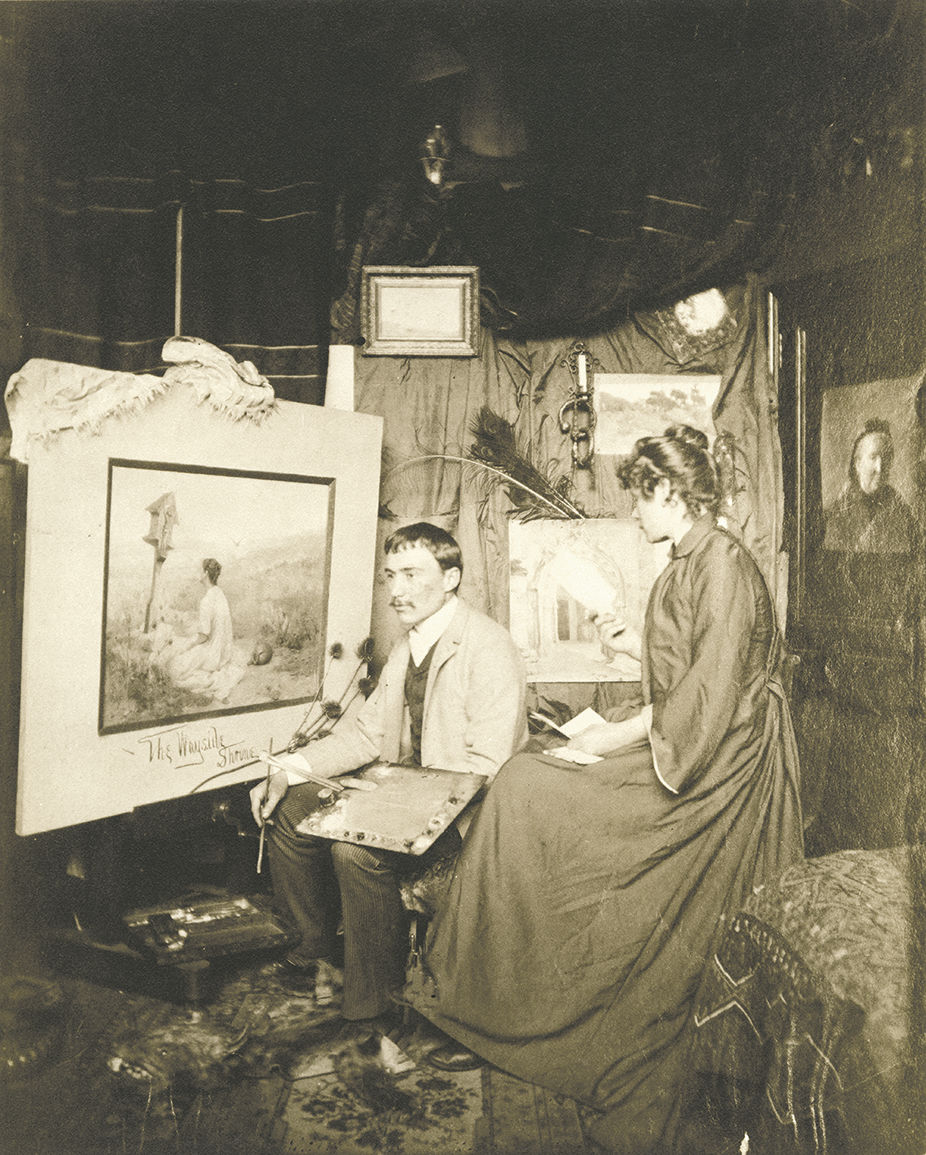 Eanger Irving Couse and his wife, Virginia, in their studio with The Devoted Shepherdess on the easel (1889), courtesy Couse Family Archives 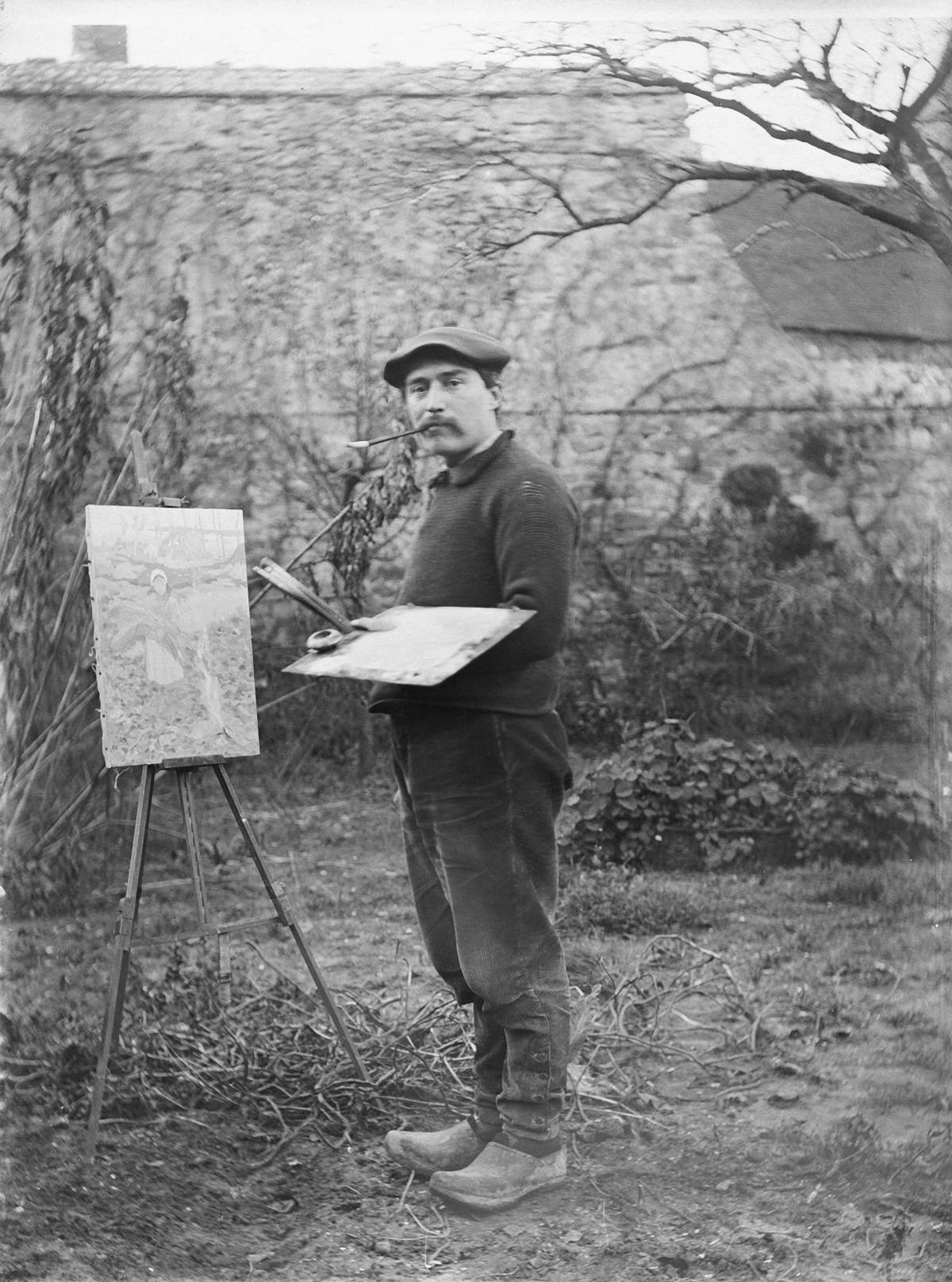 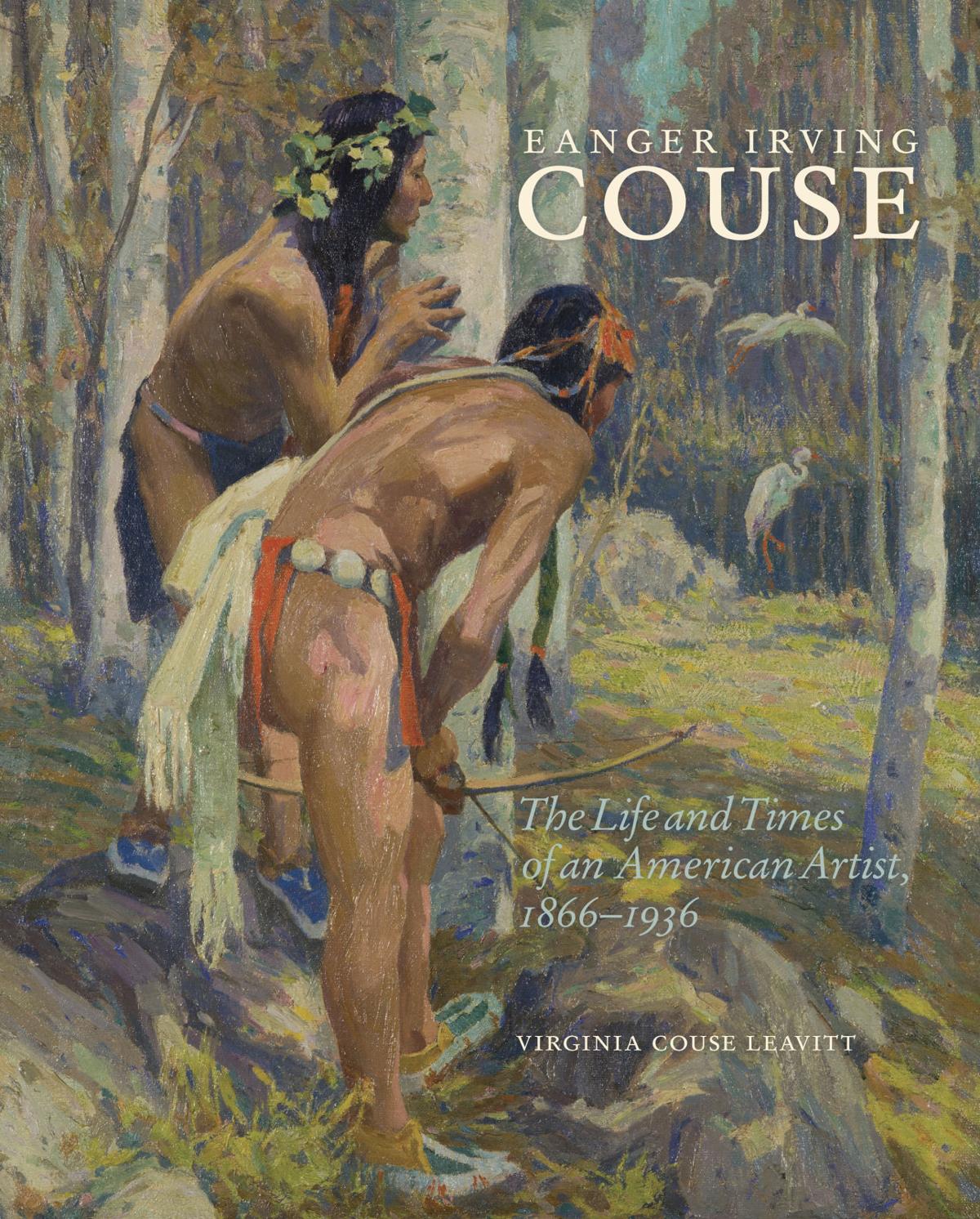 Eanger Irving Couse and his wife, Virginia, in their studio with The Devoted Shepherdess on the easel (1889), courtesy Couse Family Archives

If it had not been for the rediscovery of a cache of unopened family letters, which had been squirreled away and forgotten for 30 years, the most comprehensive biography of painter Eanger Irving Couse (1866-1936) might never have been written.

Virginia Couse Leavitt, the artist’s granddaughter and the author of Eanger Irving Couse: The Life and Times of an American Artist, 1866-1936, received the letters — 276 of them, written by her grandmother Virginia Couse between 1882 and 1912 — from her grandmother’s nephew Walker Kamm. “It’s a source that wouldn’t have been available anyplace else,” Leavitt said. “It filled in so much information that really gave me a basis to work from.”

Couse (which rhymes with “house”) was a founding member of the Taos Society of Artists, a collective formed in 1915 that helped turn Taos into an influential regional and international art center. He was a skillful observer of human nature, and he invested his subjects — many of whom were Native peoples living in the American Southwest — with dignity, humanity, and reverence.

“Much of what his work was about was trying to show them as individuals,” Leavitt said.

Leavitt’s biography, published in January by University of Oklahoma Press, follows a chronological trajectory, beginning with Couse’s early years in Saginaw, Michigan, where it was apparent from a young age that he possessed a unique faculty for art.

When Couse was 13, his parents had enough faith in his artistic abilities to let him decorate the ceiling of the family home with elaborate geometric designs that attracted the attention of the townsfolk, including a house painter who visited regularly to teach the budding artist how to mix paint. It’s evident from the drawings Couse made as a student at Académie Julian in Paris in his early 20s that he quickly mastered the art of rendering the human figure.

“He was a very good draftsman,” Leavitt said. “His greatest interest was really in the human figure. That shows up in his Taos paintings. There’s a painting that we have that’s a very large copy of a 17th-century painting that was in the Louvre. It’s a fantastic copy. It has his signature and the date, 1886. He went there in 1886, so that means he had to have painted it as soon as he got to Paris.”

Before attending the Académie Julian, Couse’s only formal training occurred during a few months at the Chicago Academy of Fine Arts and two years at the National Academy of Design in New York.

“He was a very driven individual, without a doubt,” said Davison Koenig, executive director and curator of the Couse-Sharp Historic Site, in Taos. “From a very early age, he definitely had a vision of who [he was] and what he wanted to do with his life, and he pursued it very seriously.”

Leavitt captures Couse’s youthful misadventures in vivid detail, characterizing him as a sensitive, committed young painter who, despite the occasional indiscretion — such as squandering the award money from an art competition in Paris on a night of drinking and carousing — often sacrificed creature comforts for the sake of his art.

Details like that bring Leavitt’s book to vibrant, eminently readable life. There’s a spirit that animates the telling, one that captures the allure that enraptured artists of Couse’s era and spurred them toward adventures in Europe, where many a young artist traveled to pursue study. There, they learned from some of the most prestigious art institutions of the day. Leavitt’s book captures the sweep and scope of the period in a way that is at once nostalgic, revealing, and insightful.

“What I was trying to do in this book was to be very specific about the experience of an artist at that period,” she said.

Leavitt, who lives in Taos, is now 87 years old; she was only four when her grandfather died. In the 40 years that she spent reconstructing his life story, she came to know him more intimately, perhaps, than anyone living.

“I got my MA in art history,” she said. “I was interested in medieval art. But when my father passed away and I realized what was stored here, I thought to myself, I’ve been preparing for this without really knowing it. So I switched my whole interest to the Taos Society of Artists and my grandfather’s work. That was in 1979.”

Leavitt had the benefit of working from a well-preserved archive of letters, journals, and ephemera, most of which is now housed at the Couse-Sharp Historic Site, which is managed by the Couse Foundation. The site preserves the legacy of both Couse and Joseph Henry Sharp, a co-founding member of the Taos Society of Artists, and includes Couse’s home and studio as well as two studios that belonged to Sharp, who was his neighbor and a close friend.

“The archive that he left is extraordinary,” Leavitt said. She spent the winter seasons organizing it as well as working on the biography from her second home in Tucson. In the summers, Leavitt and her late husband would return to Taos to work on renovating the historic property.

“It’s one reason it took me so long to write the book. I only had the wintertime to work on it.”

The Couse-Sharp Historic Site will eventually house a majority of the archives of the Taos Society of Artists, said Leavitt, who is secretary of the Couse Foundation’s board of directors.

AN Indelible mark on art

In the late 19th and early 20th centuries, artists sought to document what they regarded as a disappearing culture, if not a vanishing race. “You still had artists like [Frederic] Remington and [Charles] Russell who were depicting the never-ending struggle of Manifest Destiny,” said Koenig. “What Couse was painting was in stark contrast to what dime novels, illustrated magazines, and what Buffalo Bill and his Wild West road show are depicting and sending out to mass audiences.”

Couse was interested in Native American culture from the time he was a boy. Although he didn’t visit Taos until 1902, Taos Pueblo and its Native community proved to be fertile subject matter, and tribal members often served as subjects and models for his paintings. They also became his friends.

It’s easy to dismiss Couse’s paintings today as sentimental or old-fashioned. On the one hand, they seem to represent Native people as exotic. His 1909 painting Elkfoot of the Taos Tribe, for instance, is a majestic life-size portrait of Elkfoot (whose anglicized name was Jerry Mirabal), draped in a crimson blanket, with beaded leather moccasins on his feet, carrying a thin “coup stick.” The latter would have been used to strike at an enemy in battle, although it was not an item common to the Taos tribe.

On the other hand, Couse rarely sensationalized his subject matter. Most of what he depicted were prosaic scenes that gave viewers a window into the everyday lives of Native peoples. “Couse’s images of domestic life — of pottery making, weaving, cooking, quiver and blanket mending — helped Anglo society to empathize with the Indian,” Leavitt wrote.

Her book makes the case that Couse’s work must be viewed in the context of the time. Another artist who painted in a similar vein, George de Forest Brush, a contemporary of her grandfather’s, decried the effects of modernization on Native peoples — and Couse shared that view. He believed, she wrote, “that the saving grace of Taos Pueblo was its distance from the railroad.”

“It isn’t that they’re depicting the outward aspect of Native Americans and Hispanos. They’re depicting the interior lives of their subjects because they’re enmeshed in their lives,” Koenig said. “The Taos artist’s vision was to create a uniquely American art. There’s a lot of things that those artists did that affected the direction of American art, one of them being the color palette. At the turn of the last century, everything is largely desaturated browns and greens, and man was small in the landscape. What these artists depict is very much focused on the individual, the people in the landscape.”

Couse and the Taos artists made an indelible mark on American art by influencing the perceptions of the American Southwest. They sold their vibrant depictions of its diverse cultures and the beauty of its landscape in East Coast and Midwest galleries and hung them in national museums. In calling attention to the landscape’s richness, as Leavitt wrote, they drew other artists to the region and specifically to Taos, which had become a mecca for artists and tourists by the time the society disbanded in 1927.

“Passing on all of the information or the things I’ve learned, that’s kind of difficult,” Leavitt said. “There’s just so much. There’s always more to be said and more to learn.” ◀