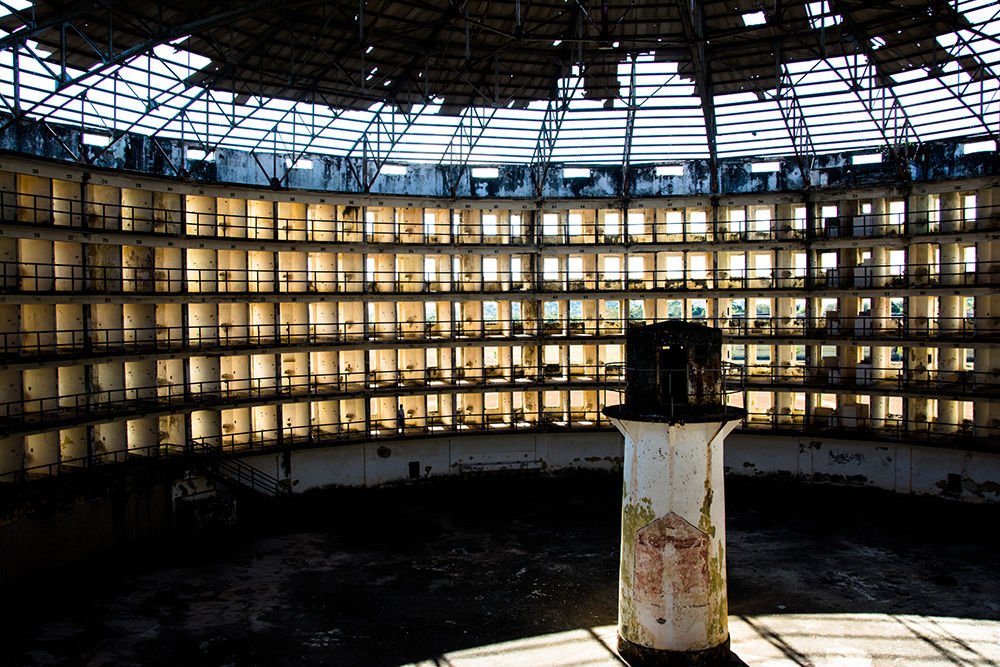 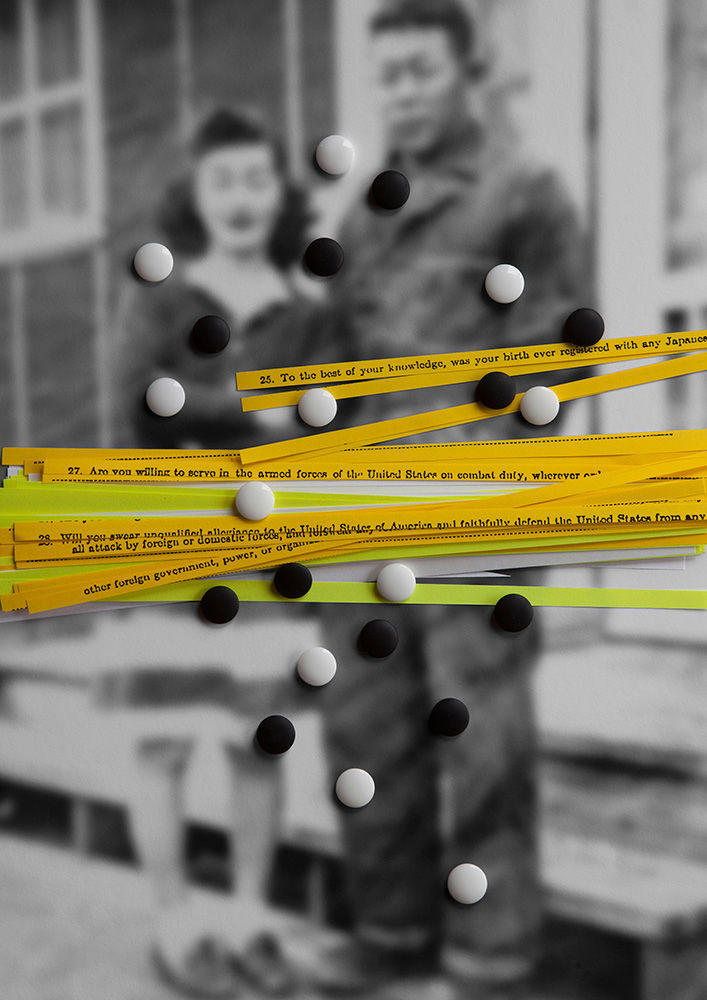 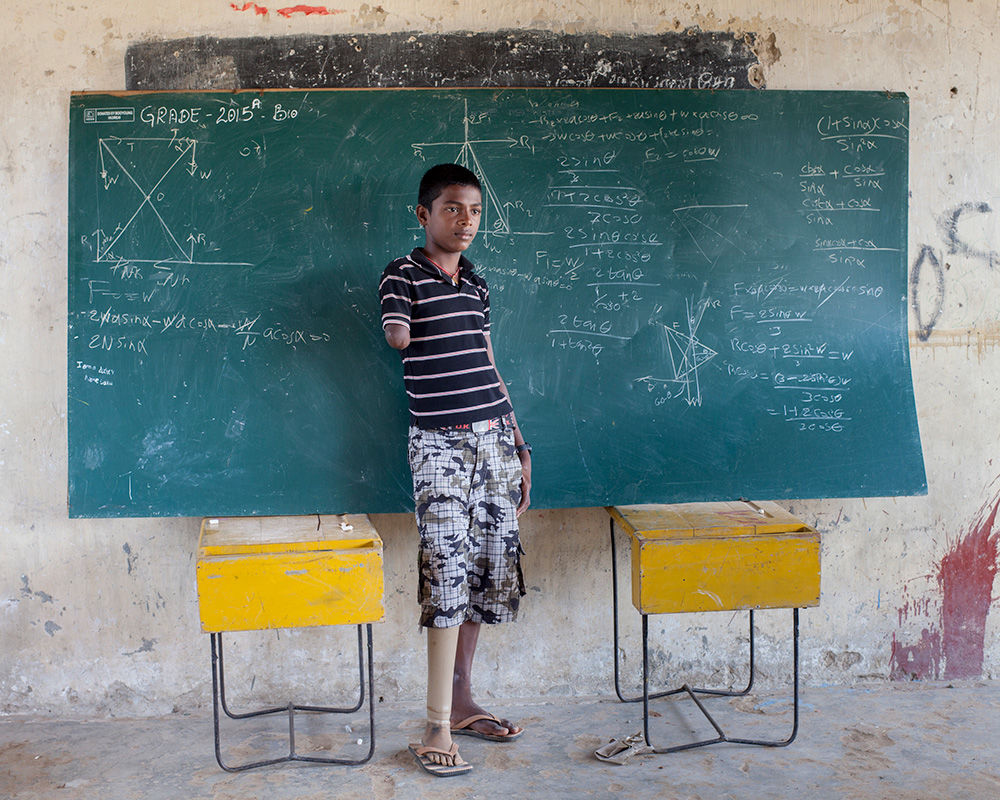 Ashok Sinha's 2013 archival inkjet print of a young man named Thayudsan, who lost his father — as well as his right leg and arm — during Sri Lanka's civil war. He wants to be an engineer when he grows up. Courtesy Marion Center for Photographic Arts.

Ashok Sinha's 2013 archival inkjet print of a young man named Thayudsan, who lost his father — as well as his right leg and arm — during Sri Lanka's civil war. He wants to be an engineer when he grows up. Courtesy Marion Center for Photographic Arts.

The Presidio Modelo, a former Cuban prison that stands as a testament to human oppression, followed the blueprint of a late-18th-century architectural design — the panopticon. The circular, Coliseum-like model allowed for prisoners to be observed from a central location without knowing if and when they were being watched, thereby eliciting their obedience. This particular panopticon prison, built in the 1920s under Cuban president-turned-dictator Gerardo Machado, was designed so that inmates’ views of one another were blocked, increasing their sense of isolation. The structure was photographed by Carl Moore, whose stark images of the exterior and interior are included in Center’s PhotoSummer exhibition, Art & Oppression, on view at the Marion Center for Photographic Arts, at Santa Fe University of Art and Design. The Presidio looks small enough to circumambulate in under 10 minutes, but it was built to house up to 2,500 inmates, a number that, according to Moore’s statement, swelled to a staggering 6,000 before it was shut down in 1967 after a series of hunger strikes and riots. “I’ve always believed everybody should go to a prison at least for one day in their life,” said exhibit co-curator and documentary photographer Tony O’Brien, chair of the  Marion Center.

Neighborhood Watch, a series of framed self-portraits by Kerry Skarbakka, opens the exhibition. The images show the artist as a boy, as a young man, and finally in middle age, depicting a persona or character that is more an invention of the artist than a traditional self-portrait. As a boy, he’s full of bright optimism, with a big smile. As a young soldier, he has the face of a stern youth out to prove himself, and in the penultimate photo, his unkempt appearance and full beard accompany a face hardened by disillusionment. The image looks like a mug shot. “This is a new project, so it’s still somewhat of a work in progress,” said co-curator Melanie McWhorter, programs and outreach manager at Center. “It’s still a concept piece, so he’s still testing out a lot of these ideas. There’s these threads of male actions, and they toy with the complexity of masculinity, too, in some ways.” The photographs show a progression intended to reflect a common experience of white male disenfranchisement, which leads the series’ protagonist on a road from open to closed emotion. In the series’ final image, the barrel of a gun, pointed directly at the viewer, renders the artist’s face featureless. It’s among the first things you see when entering the space. “Everywhere you go, it’s pointing right at you,” O’Brien said. “It’s so strange.”

For her still lifes, Jane Szabo takes objects from her family home and  arranges them as tableaux that reflect her relationship with her elderly parents, who recently moved to an assisted-living facility. She made the series, Family Matters, in response to her role as a daughter and caregiver, an instance where obligations can take the form of oppression. One stark unadorned image from the series is a shot of a pincushion, while another shows a diary under a pile of rocks. The objects appear isolated, surrounded by nondescript black backgrounds, and the works stir up thoughts about home, displacement, and memory.

Similar themes arise in Balancing Cultures, a series of images of photographer Jerry Takigawa’s relatives, Japanese Americans who were sent to an internment camp during World War II. Takigawa explores the culture of fear that led to their detainment as well as the silence and shame that affected them when reintegrating into society after the war.

Art and oppression is a compelling topic for photography, a medium that often serves as a silent partner in surveilling others. Joan Fitzsimmons’ series Surveillance: Warsaw is a voyeuristic body of work, which the artist shot through the peephole of an apartment where she was living in Poland. She documents the comings and goings of neighbors through the hole. Each image is a small circle surrounded by darkness, showing the hall outside. The subjects, distorted by the curvature of the door lens, feel removed from the viewer. The candid images, shot in an old building, evoke the Cold War era of oppression. The theme of surveillance is also dealt with in one of Kelly Eckel’s mixed-media Scratched Surface photographs: a surreal, nightmarish image of a multitude of eyes in a disembodied head.

Wes Bell’s black-and-white prints deal with oppression and the environment — trees that are fastened with cables and chains to keep them from encroaching on landowners’ property. In some of the shots, the trees are wrapped so tightly that time has caused the wood and bark to grow around the chains, which squeeze the trunks like hourglasses.

Ashok Sinha’s series Portraits of Silence reminds us of the human cost of oppression in the most poignant and visceral way. His subjects, victims of Sri Lanka’s civil war, offer hope nevertheless, because of their resilience. They include a budding young scientist who lost an arm and a leg in the war and children whose schoolrooms now lie in ruins. Nearby, a series of photos by Pilar Law — of a razor-wire fence and a puffy cloud in the sky beyond — leads the viewer on a journey from imprisonment to freedom, or perhaps a dream of release. In the last shot, the razor wire has disappeared and the blue sky remains, a sharp contrast to the barrel of Skarbakka’s gun.

Images in Art & Oppression touch on topics such as prison tourism, uranium mining and the environment, surveillance, the suppression of women and minorities, victims of civil wars, and refugee crises.