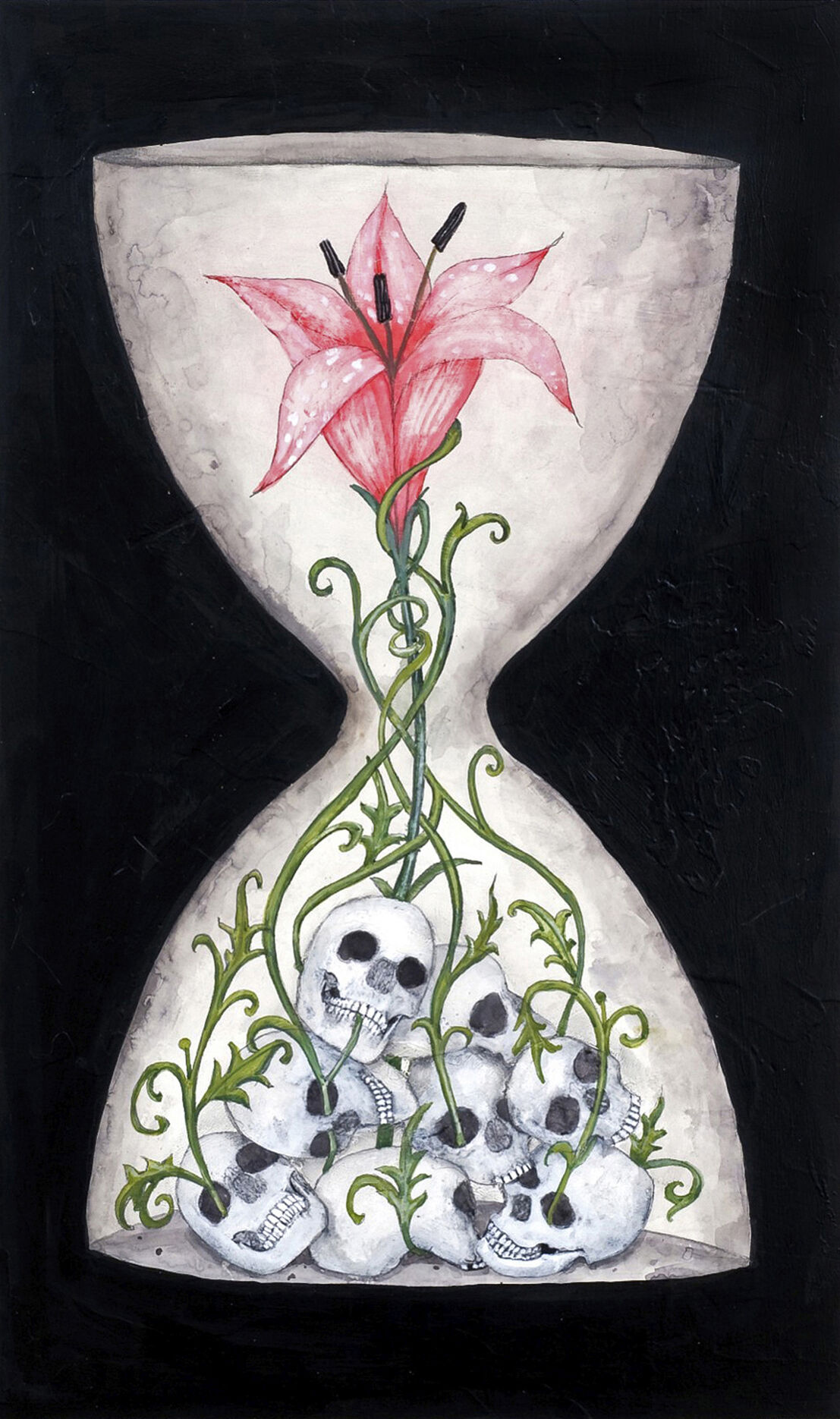 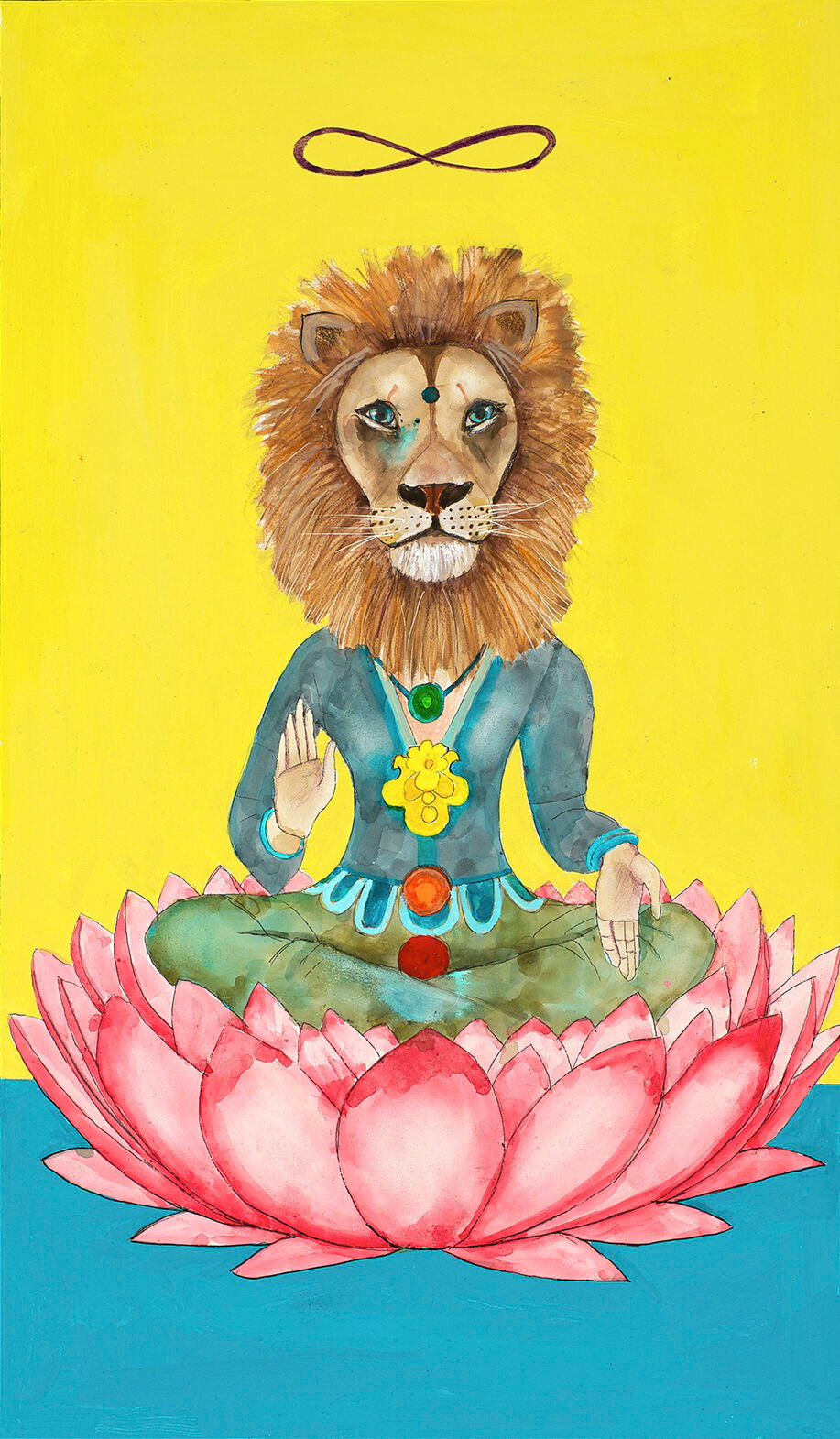 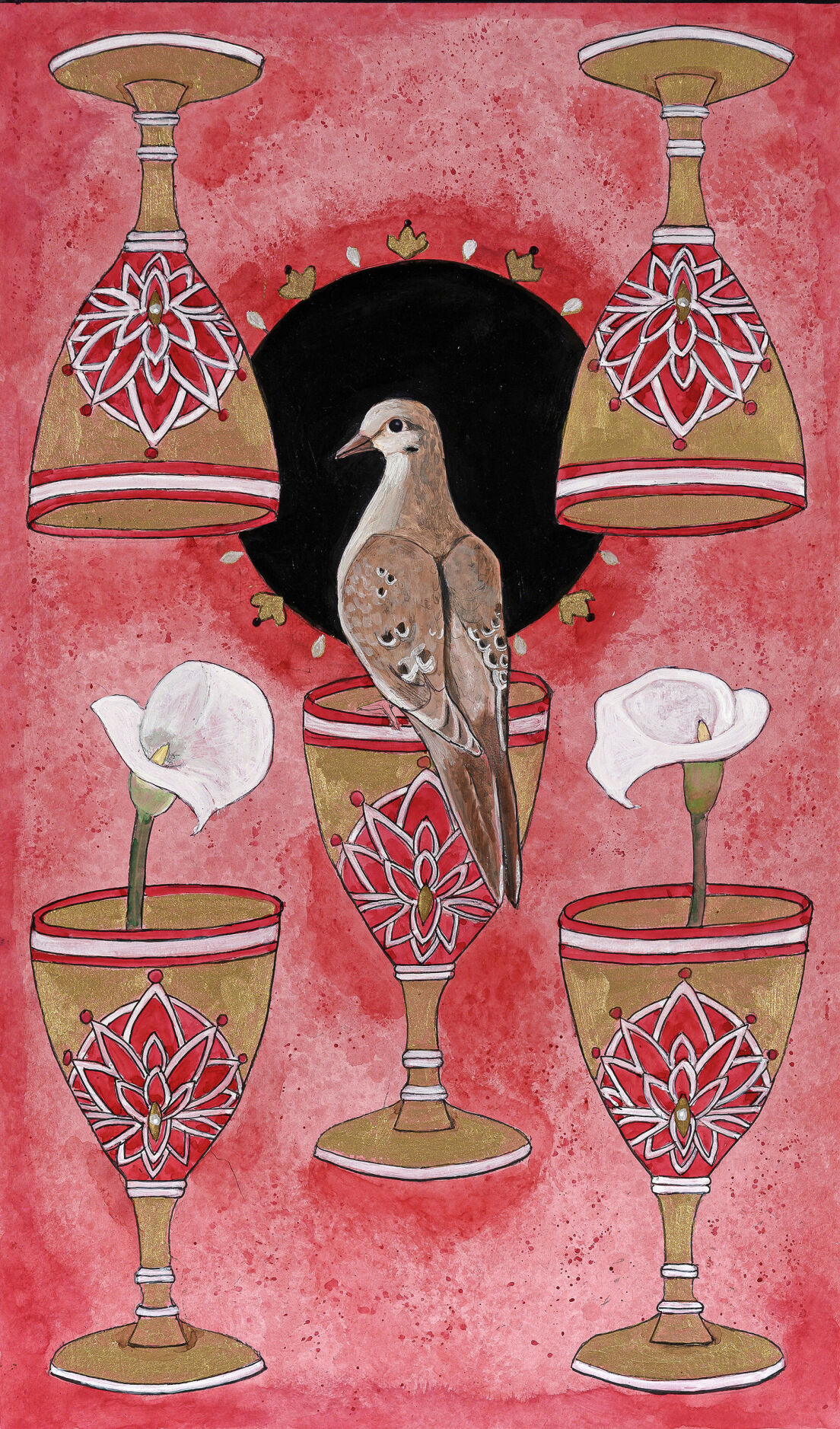 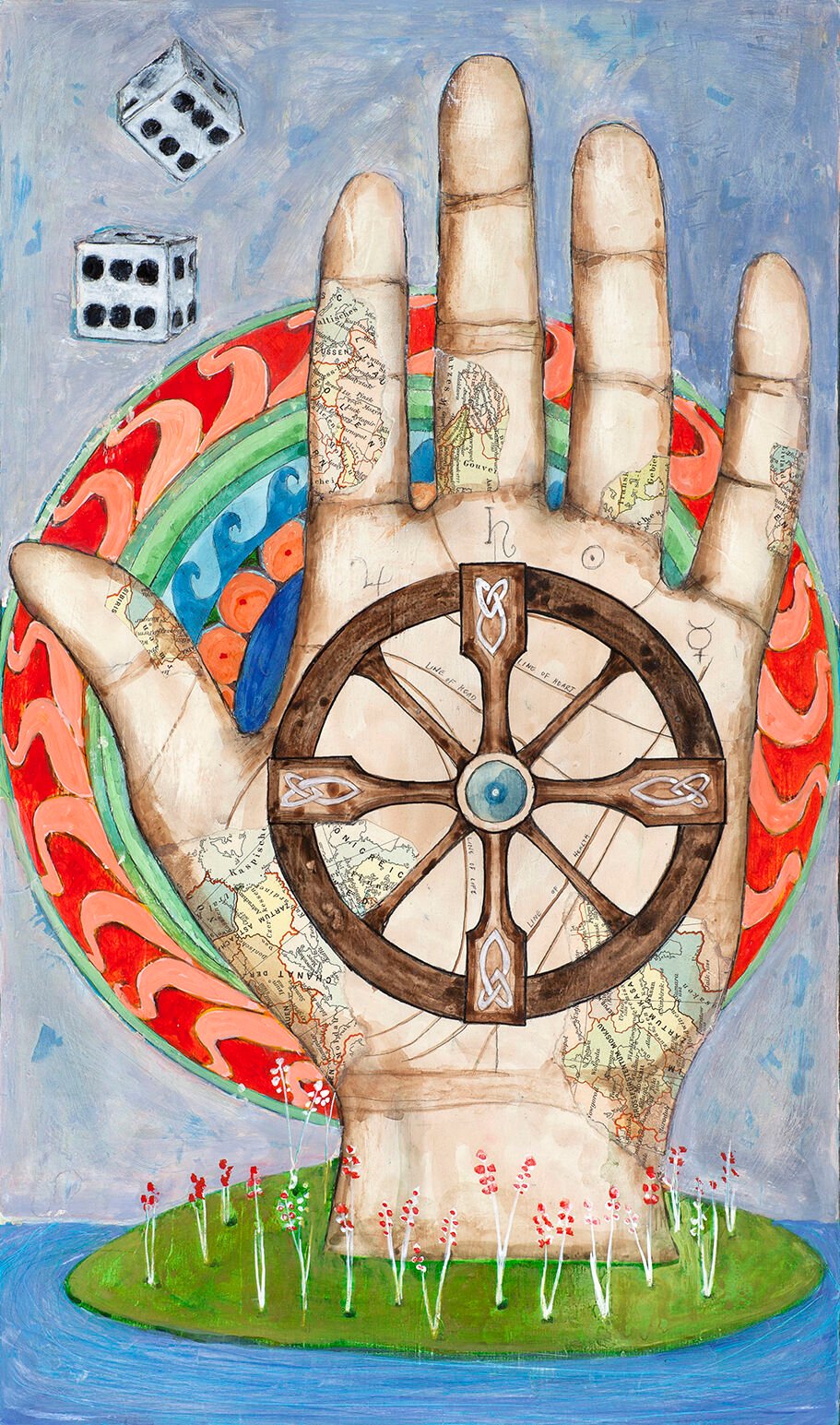 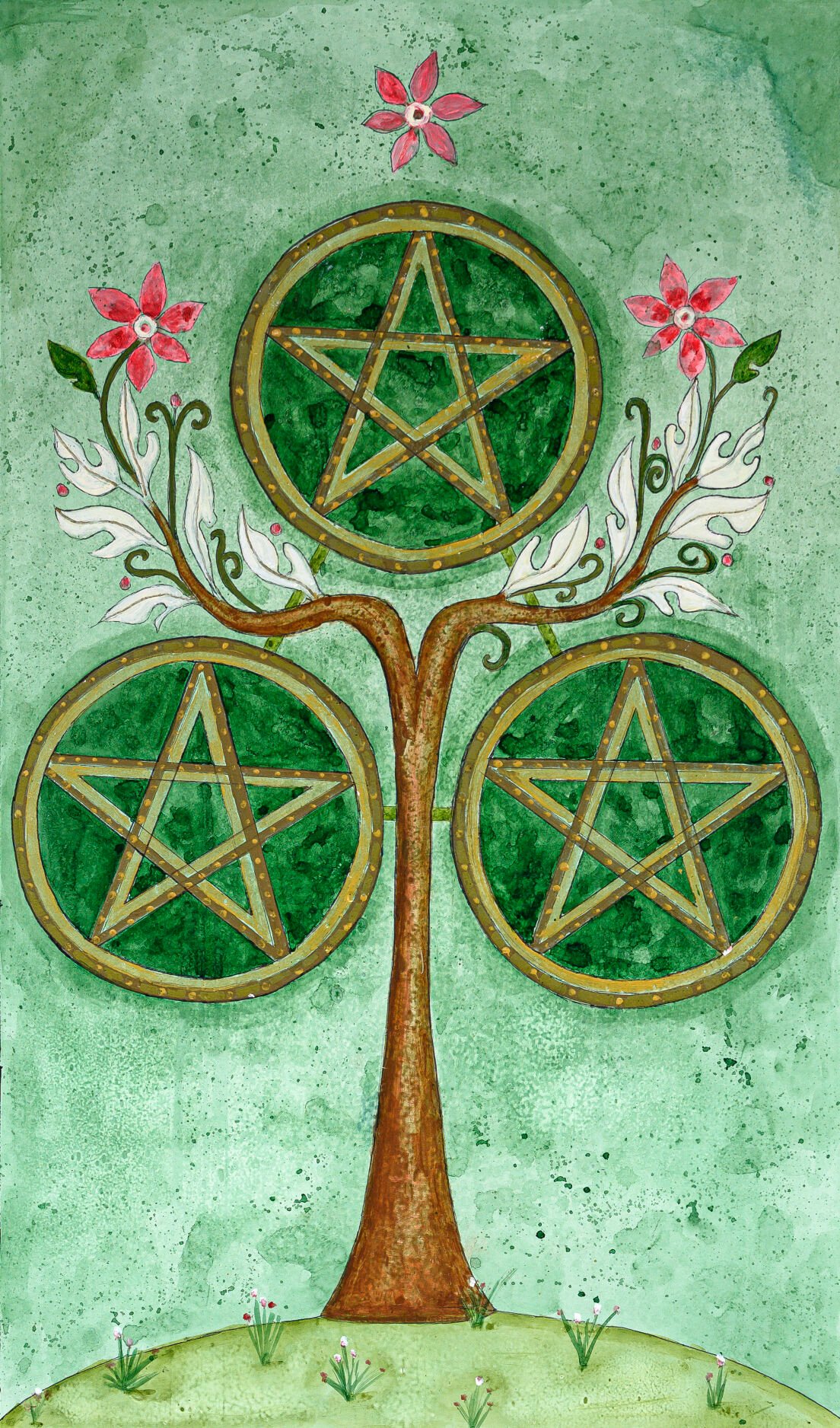 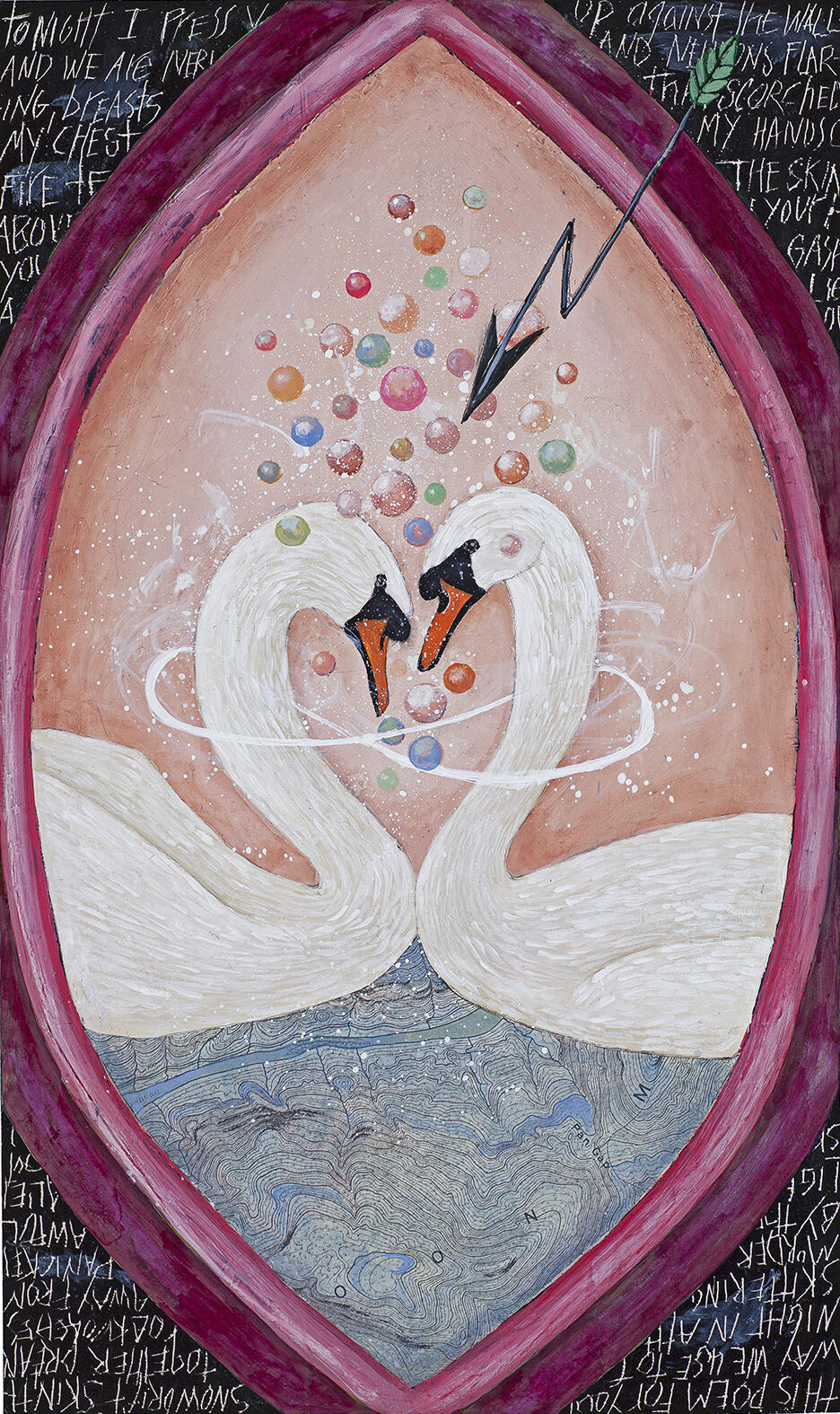 Among the best-known images of the tarot death card is the one in the Rider-Waite deck, which was first published in 1909. The skeletal figure of death, mounted on a pale horse, wields a black standard emblazoned with a white rose. (In many of the older decks, death appears with his traditional scythe, the instrument that lays low all, regardless of age or station.)

But in Santa Fe artist Alexandra Eldridge’s The Radiant Tarot, the figure is an hourglass, conceived of here as a symbol for the cyclical round of death and rebirth. In its lower portion, human skulls are stacked in a heap. From their eye sockets sprout vines that climb through the narrow waist of the glass to the upper chamber, where they’re crowned by a blooming lily.

Draw this card in a reading, and it might be reversed. Life into death.

Eldridge made it soon after a move from Santa Fe to Brooklyn, New York, in 2009. She’d lived in Santa Fe for more than two decades.

“It was the very first card that I did,” says the 73-year-old artist. “It was, in many ways, about saying goodbye, and a death, to my life in Santa Fe, with the hope — with the great lily coming out — of renewed, energetic, artistic everything. I only lasted six months, and then I came back here.”

In medieval Europe, the tarot was primarily used for card games. In the late 17th century, it became a popular means of divination, the activity for which it’s mainly used today. The four suites of its 56-card minor arcana — cups, wands, pentacles, and swords — loosely correspond to the suites of the standard playing deck: hearts, spades, clubs, and diamonds.

Eldridge worked on her suite of tarot imagery, which includes the 22 cards of the major arcana, over a 12-year period. Each one is an 18-inch by 24-inch painting on wood panels made with Venetian plaster and water-soluble paints.

“Venetian plaster gives you great texture, and you can lay things into it, not that I did that with these, because I had to keep them quite illustrative. But it takes paint beautifully. If I made a mistake, I could easily scrape it off with a razor.”

The entire suite was published this year in a boxed set and accompanied by The Radiant Tarot: A Guide to the Cards (Red Wheel/Weiser, 208 pages, 78 tarot cards, $40), a book by author, educator, and poet Tony Barnstone. The deck itself is subtitled Pathway to Creativity.

Eldridge debuts approximately 70 of the paintings at her studio gallery on Friday, Nov. 19.

She’s a mixed-media artist who often incorporates surreal, dreamlike imagery into her work. She makes photo-based paintings in which historical imagery, taken from glass plate negatives, are combined with original painting. Human figures are given the heads of animals, or animals often appear beside the posed figures. Her work suggests an archetypal power, which she says extends back to the early 1970s and her days in Athens, Ohio. She lived with her then-husband on a 70-acre ranch, where they fostered a creative community that was built around the ideas of English poet, painter, and printmaker William Blake (1757-1827).

“I was a student, and I married my art professor. We raised sheep and chickens and had big organic gardens. We put on plays and pageants. My ex-husband spent much of his life involved with the work of Blake. We called the ranch Golgonooza, which is from Blake’s mythology, meaning the visionary city of art. Blake was really just a stepping off point. The exhibitions we had were about visionary art.”

Eldridge considers herself a visionary artist and is inclined to follow the imagery she receives in dreams and manifest them in her paintings.

“Whatever is going on in my psyche, which I pay a lot of attention to, that’s where the art goes. So I am in each one of these tarot paintings.”

Whether it’s the major or minor arcana, the cards in any tarot deck are rich with symbolic imagery. But their meanings are open-ended, which is part of what makes them ideal tools for divination. One can easily project oneself into the cards or see oneself and one’s circumstances reflected in them.

“With these and the rest of my paintings, I want people to have all different opinions about them and all different ways of seeing them. That’s what the tarot cards are all about. They’re little portals into the imagination.”

Despite her interest in esoteric subject matter, Eldridge had no real knowledge of the tarot before Barnstone approached her about collaborating on the project.

“I’ve had lots of tarot readings done for me in the past, and I’m interested in this world, but I never really studied it. So when I started, I got a huge collection of books and read everything I could.”

Barnstone was referred to Eldridge by a mutual friend. In 2008 and 2010, the artist worked with Barnstone for a couple of months at Whittier College in California where he was teaching poetry. That’s where she completed the major arcana. Then she worked piecemeal on the project until the start of the COVID-19 pandemic in March of 2020.

Her agent, Jane Lahr, found a publisher. And for Eldridge, having Red Wheel/Weiser publish her work was like coming home. She was familiar with their titles since her days at Golgonooza.

Whatever is going on in my psyche, which I pay a lot of attention to, that’s where the art goes. So I am in each one of these tarot paintings.

In the 1970s, it wasn’t easy to find places to purchase occult books in Ohio, she says.

“They were not in the mainstream as things are these days. We would order all of our books from Weiser in New York. So here I am in Athens, Ohio, finding all my resources there, and now it has come full circle because Weiser’s publishing my deck, which is really exciting.”

But Eldridge needed to finish the work and still had approximately 50 cards outstanding.

“In a six-month period, I finished the minor arcana and worked like six hours a day to get it done. I was sort of in a trance.”

The background of Eldridge’s minor arcana is color-coded: red for cups, green for pentacles, yellow for wands, and blue for swords. And several of the cards from each suite bears the likeness of an associated animal: a dove with the cups, a deer with the pentacles, a lion with the wands, and a magpie with the swords. These are not standard or traditional associations, but intuitive ones on the part of Eldridge. Wands, for example, are typically associated with action, will, and determination. The lion seemed like an ideal beast to pair with them. “The lion is all about courage, of course, but also action and creativity,” she says. “It’s the courage to be creative and the courage to go out into the unknown world.”

But Eldridge stops short of explaining away the significance, because tarot imagery is intended to be more suggestive than explanatory.

“I like there to be a bit of mystery to it,” she says. “The imagination — the only real and eternal world — I’m working from that always. It was not very difficult for me to continue that vision with these paintings.”