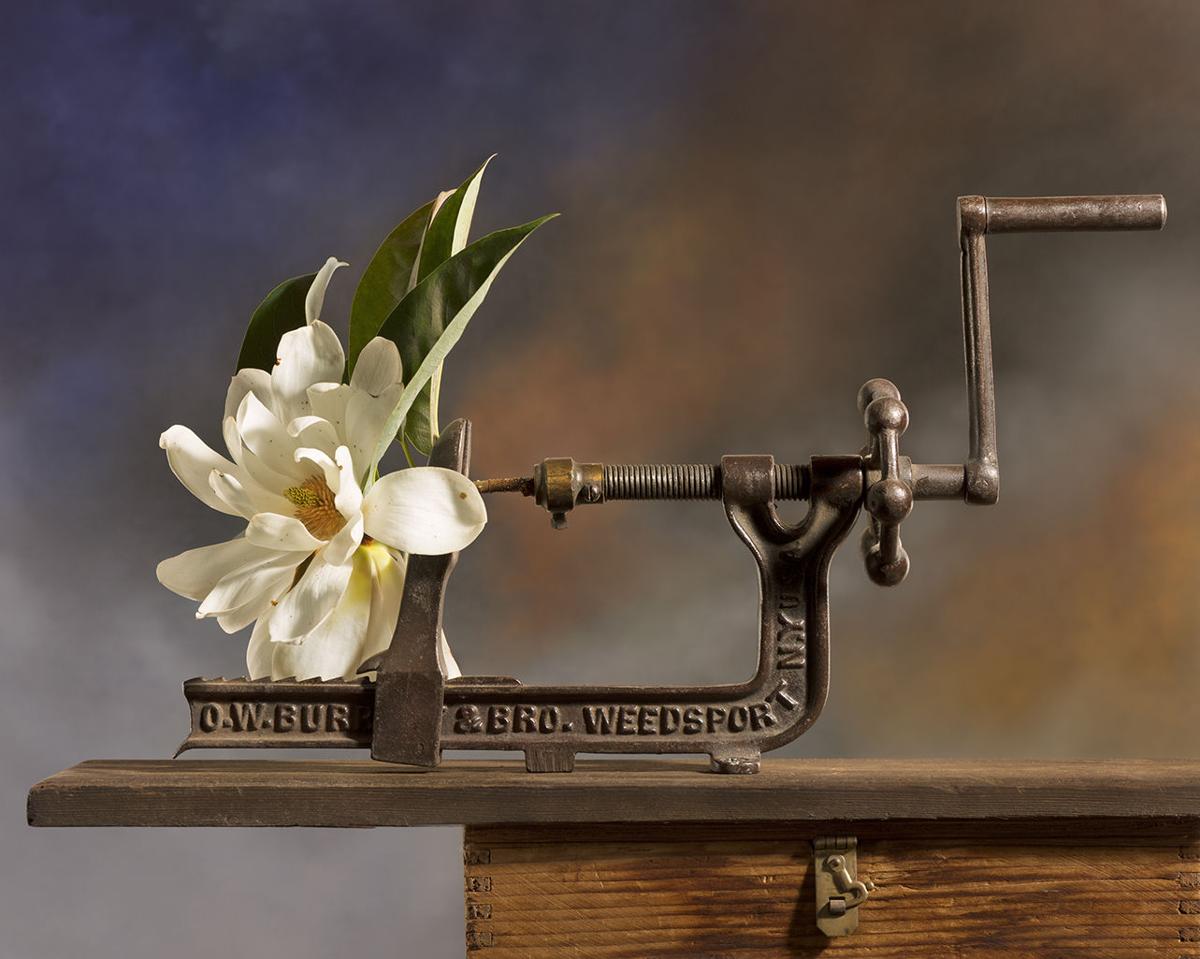 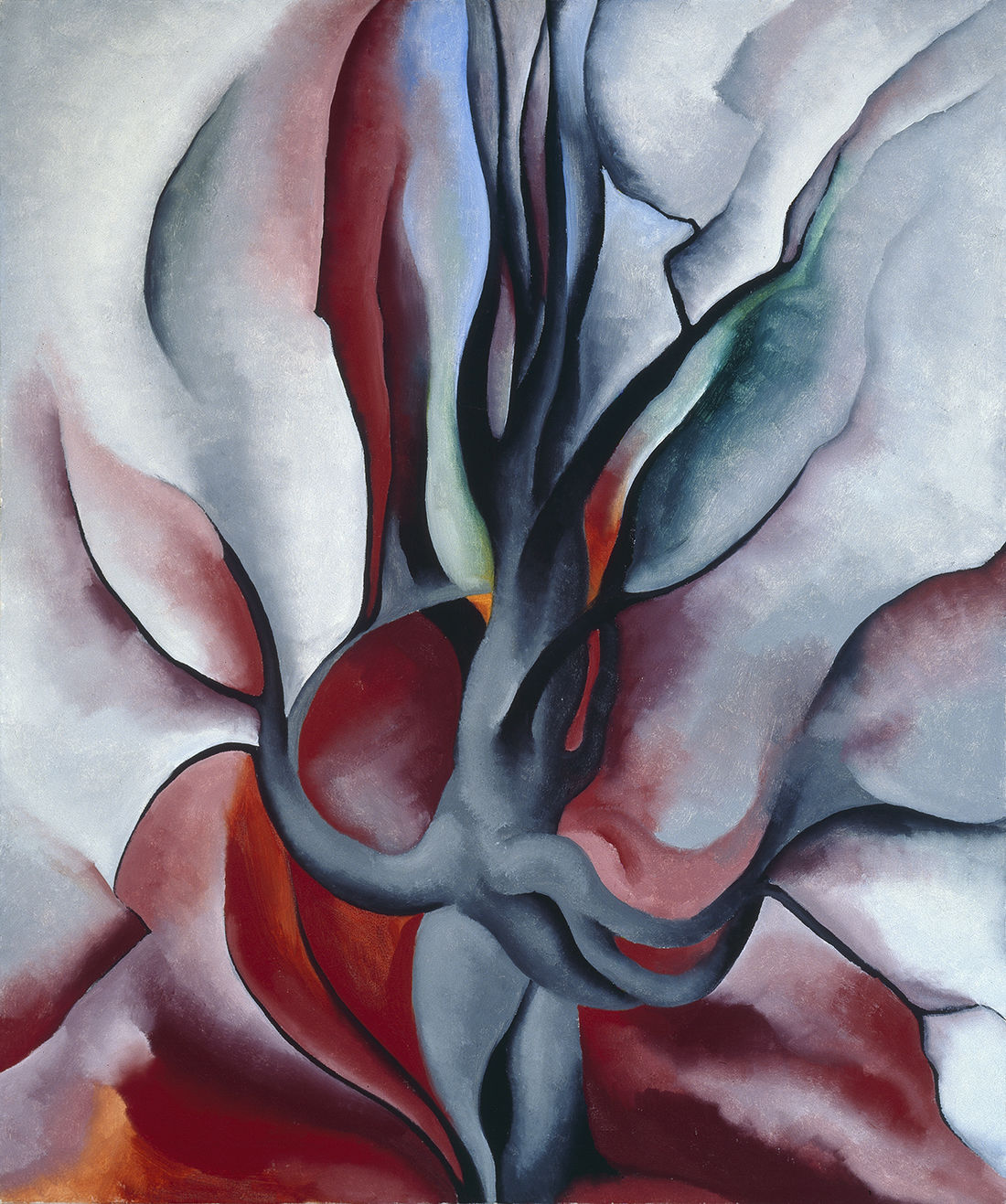 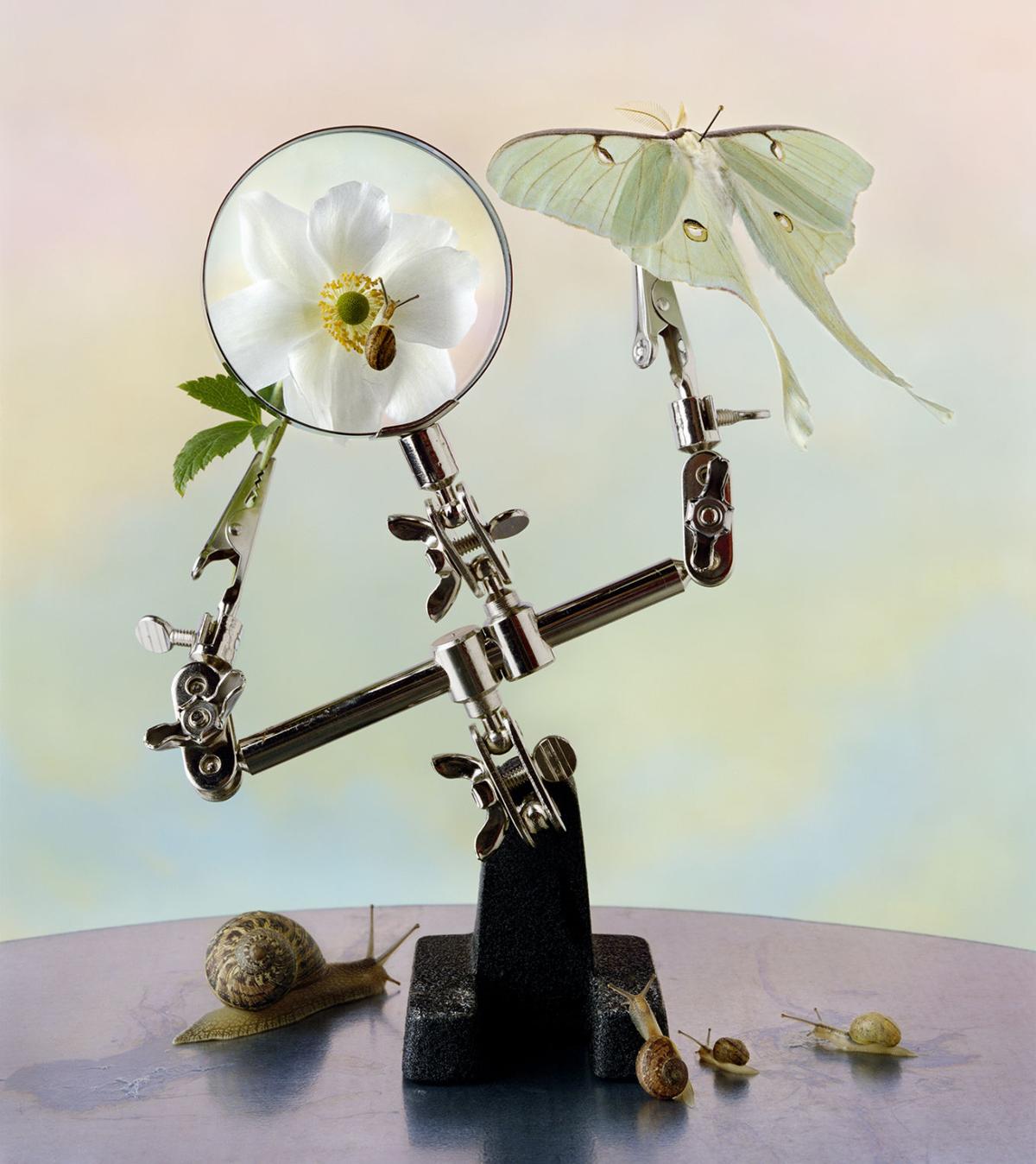 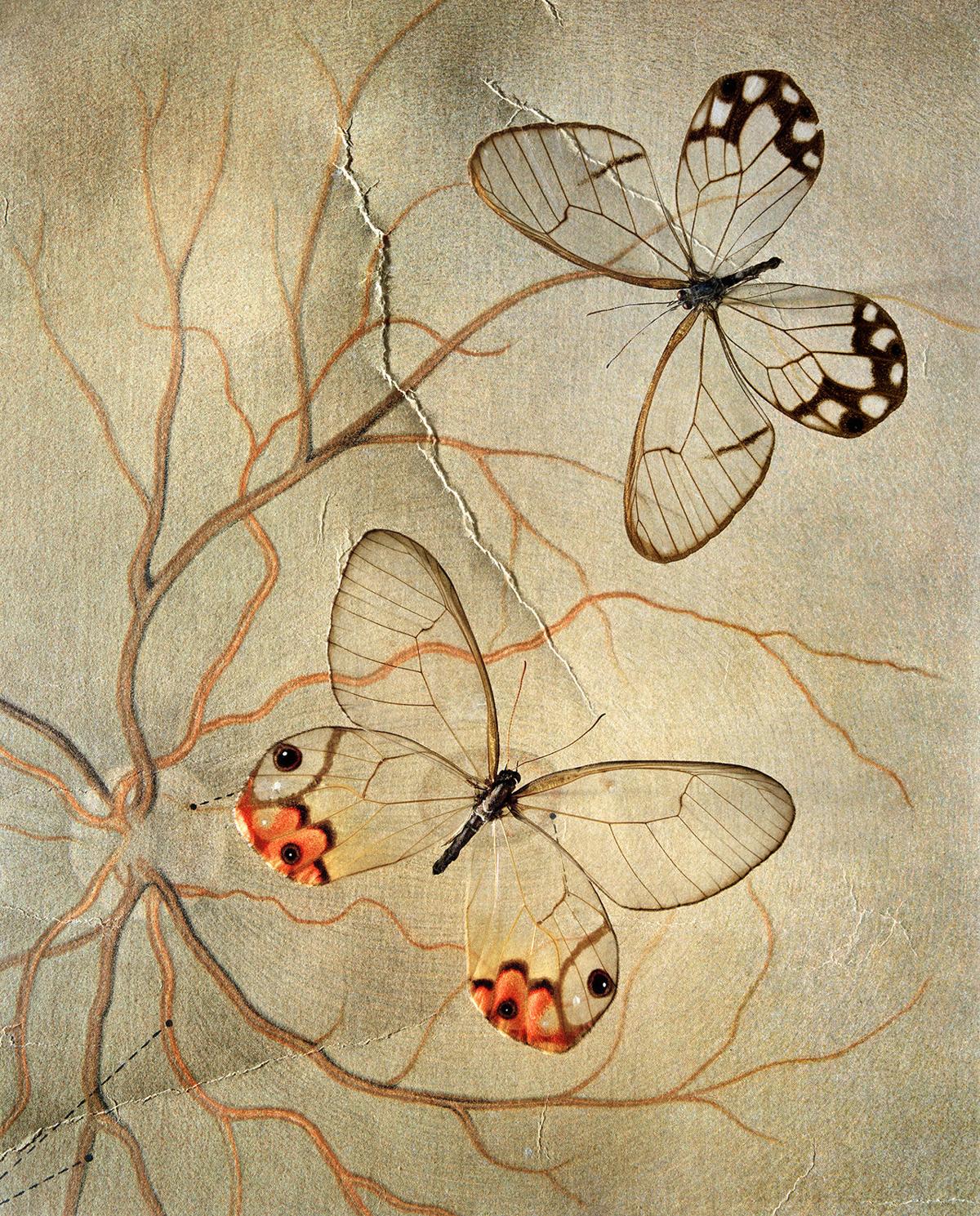 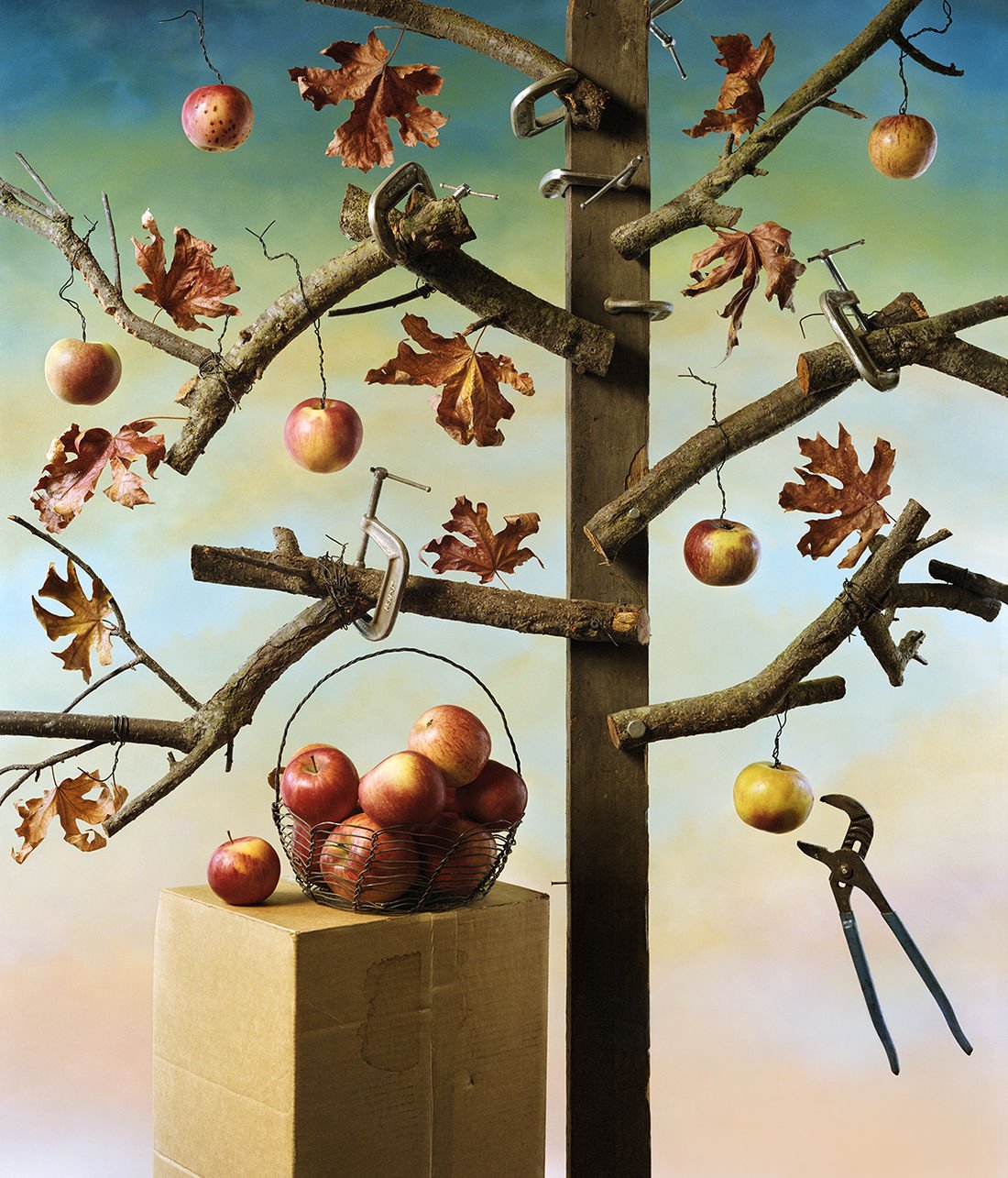 The paintings of Georgia O’Keeffe and the photographs of Jo Whaley draw on different themes and subject matter. But when the works are seen together in Echoes, opening Friday, Nov. 2, at the Georgia O’Keeffe Museum, parallels abound.

The show juxtaposes a selection of Whaley’s photographs with the O’Keeffe's in ways that are meant to highlight Whaley’s artistry while bringing a fresh perspective to the historic paintings. These are not obvious pairings. Even though both artists worked with botanicals, that doesn’t mean a Whaley photograph of a datura blossom hangs next to a painting of one by O’Keeffe. Sometimes the relationship of photo to painting is based on a similarly suggestive shape in both artists’ works, or the hint of a corresponding color, or the overall tone. “I call it pattern language,” Whaley said of the reverberations present in Echoes. “It all has to do with feeling rather than with the descriptive.”

The show is part of the museum’s ongoing exhibit series Contemporary Voices and is curated by Carolyn Kastner, a former curator at the O’Keeffe. It opens in conjunction with The Candid Camera, a show of informal photographs depicting O’Keeffe’s personal life. According to Whaley, Echoes is Kastner’s last show for the museum. Kastner selected works that range from the 1990s to the present, drawing from Whaley’s series Natura Morta, The Theater of Insects, and the more recent Botanical Studies. The resonances between these bodies of work and the O’Keeffes relate to a feature that is inherent in Whaley’s photographs. The connections between disparate objects — or what she calls pattern language, after the title of a 1977 book by architect Christopher Alexander — are a recurring motif. Whaley’s 2007 composition Colias Eurydice from Theater of Insects, for instance, depicts a California dogface butterfly superimposed over a historic daguerreotype of two women sitting side by side. The shape and soft ruffles of the butterfly wings echo the shape and ruffles of the women’s skirts. The image is paired with O’Keeffe’s abstract Tan, Orange, Yellow, Lavender (1959-1960), which has some similar colors and comparable linear elements. Kastner has taken the parallels already present in Whaley’s own individual compositions and expanded them outward by putting them in dialogue with the O’Keeffes.

For the work in Theater of Insects, Whaley takes as subjects her own collection of lepidopterans (butterflies and moths), given to her by an entomologist in Berkeley, California. Some images are paired with antique photographs and others with found objects, where the patterns and textures similarly correspond to those in the insects’ wings, as though she is imparting, through artifice, the ways in which the fragile creatures camouflage themselves in the wild.

All of Whaley’s photographs are staged beforehand, carefully constructed as tableaus. This working process developed from her early career as a scenic artist for the San Francisco Opera, San Francisco Ballet, and UC Berkeley’s Zellerbach Hall. “I painted on canvas every day — these big sets — and that’s how I got my idea in photography to build sets, to do theater for the camera,” she said. “The camera — the click of the shutter — is the performance.” For still lifes such as the photographs in Natura Morta and Botanical Studies, she constructs her tableaus on a tabletop. “It’s like a proscenium stage where the objects are the actors,” she said.

The images in Natura Morta, a series made in the early 1990s, were all shot using a 4x5 view camera. Several works in Whaley’s series, including her Analytical Behavior (1994) and Harvest, The Fall (1992), which are included in Echoes, pair flora and sometimes fauna with tools and other human-made objects in compositions that reflect the still-life tradition from which the series takes its name. The inventive approach here suggests the fraught relationship between people and nature. Harvest, The Fall, its title a wry inversion of “the fall harvest,” suggests nature has been co-opted by someone collecting not merely the fruits of the season but the season itself. The image includes a wire-frame basket full of apples, as well as apples that dangle by wires from a tree made from cut branches held together by vise grips. Autumn leaves are wired to the branches. The background of a cloudy blue sky is, in fact, as unnatural as the constructed tree. “In this case, this is a painted backdrop on canvas, and it’s about eight by 10 feet,” she said. “It’s painted to look good out of focus.” Harvest, The Fall is being shown with O’Keeffe’s Autumn Trees — The Maple (1924), which is also a stylized, abstract, non-naturalistic depiction of a tree. It is more fluid, where Whaley’s is angular.

Whaley still takes a hands-on approach in her studio practice and prints all of her own work. Her painstaking methodology is not unlike that of O’Keeffe, who maintained a rigorous practice devoted to an exploration of recurring thematic material. The newer photographs in Whaley’s Botanical Series, some of which were created this year, are a throwback to Natura Morta in terms of pairing inanimate objects with organic subject matter. She makes the compositions using cut flowers and plants — often from her own garden — and combining them with test tubes, vials, and other paraphernalia that look like they belong in a scientist’s laboratory, such as in her photograph Datura wrightii from 2014, which is paired with O’Keeffe’s Petunia No. 2 (1924), due perhaps to a similarly subtle use of color transitions. Whether they focus on spurges, irises, datura, or other botanicals juxtaposed with magnifying lenses, chemical flasks, and distillation apparatuses, Whaley’s images reflect the idea of nature that is dominated or subjugated. It’s a view of the world in which organic life is removed from its common habitat and placed in an atypical, inorganic context.

The remove seems to be the subject of the series as a whole, more so than the individual objects being photographed. But that’s not to say that they aren’t meticulously crafted, visually rewarding images meant to emphasize the inherent beauty of the flowers and plants depicted. The immediate impact of the compositions draws you in despite the underlying theme of separation from nature. “The literal Italian translation of natura morta is ‘dead life,’ ” she said. “I called my early still-life work Natura Morta for that reason. The idea is to seduce through beauty. Then you can reveal what you want to reveal.” ◀