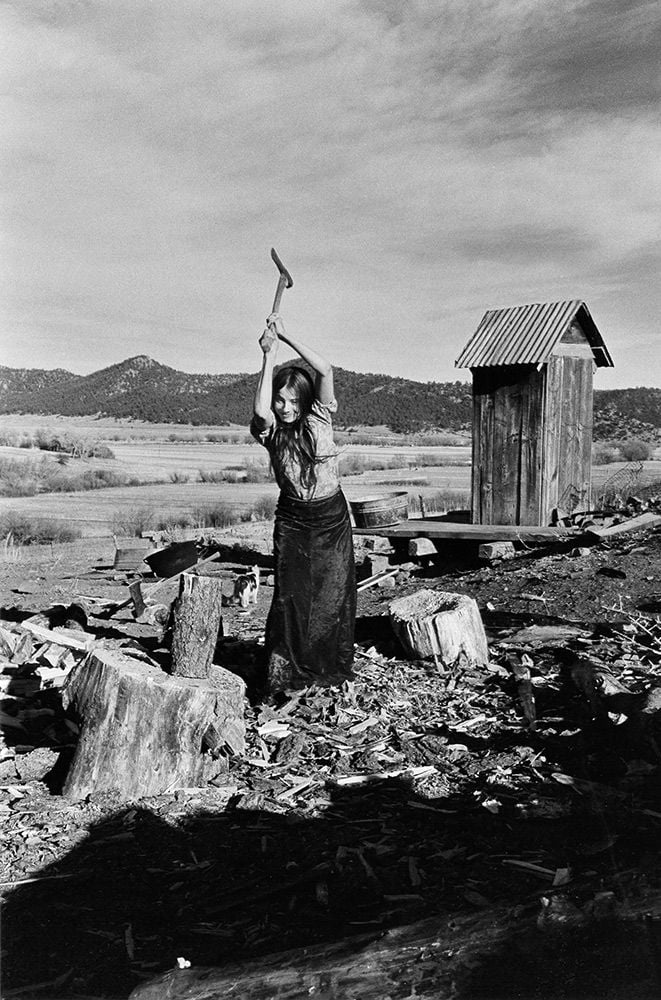 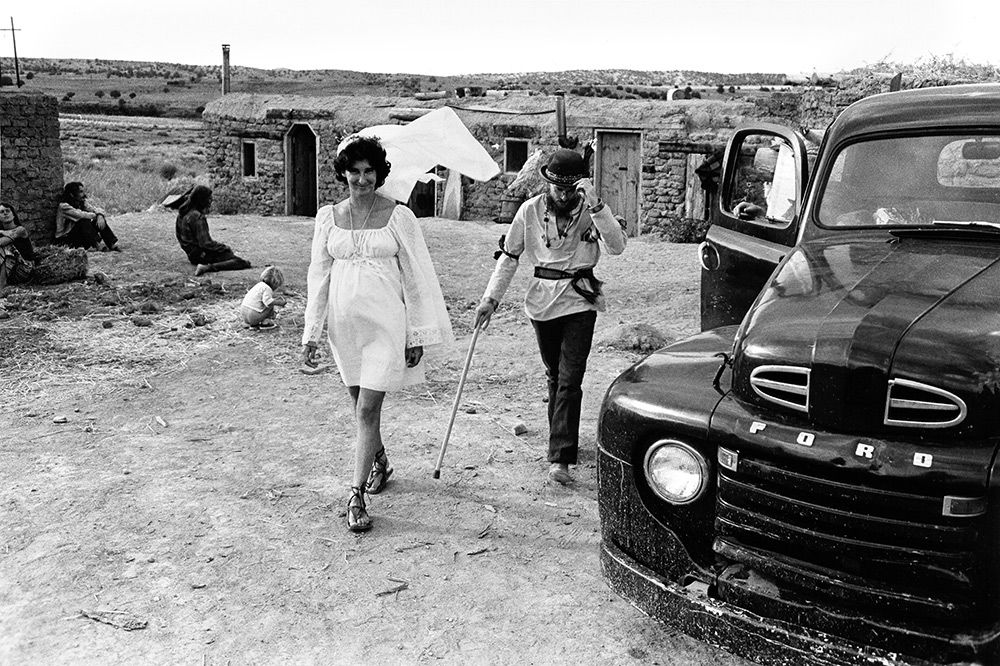 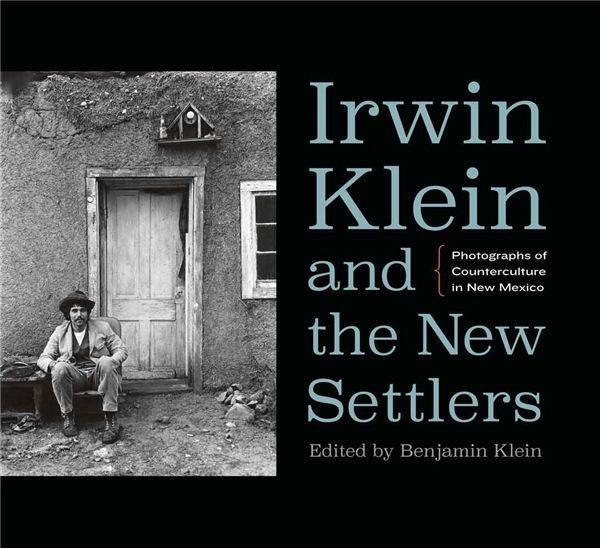 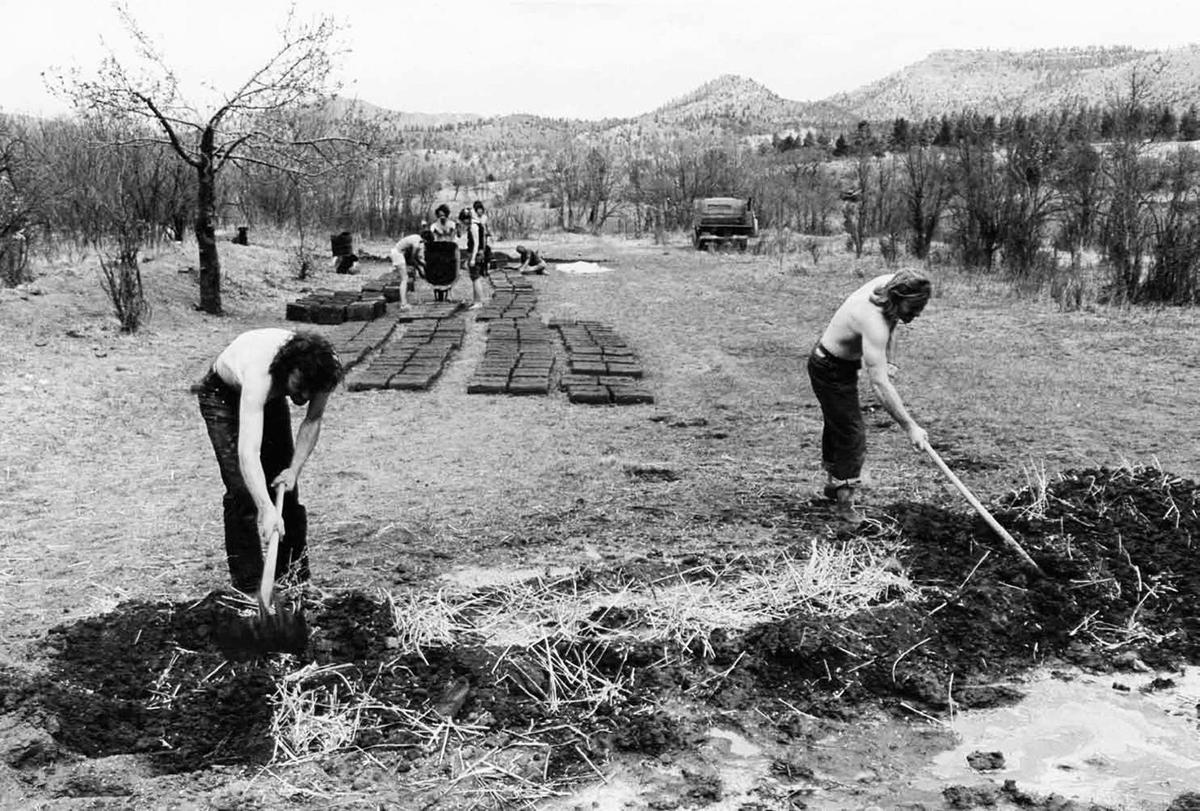 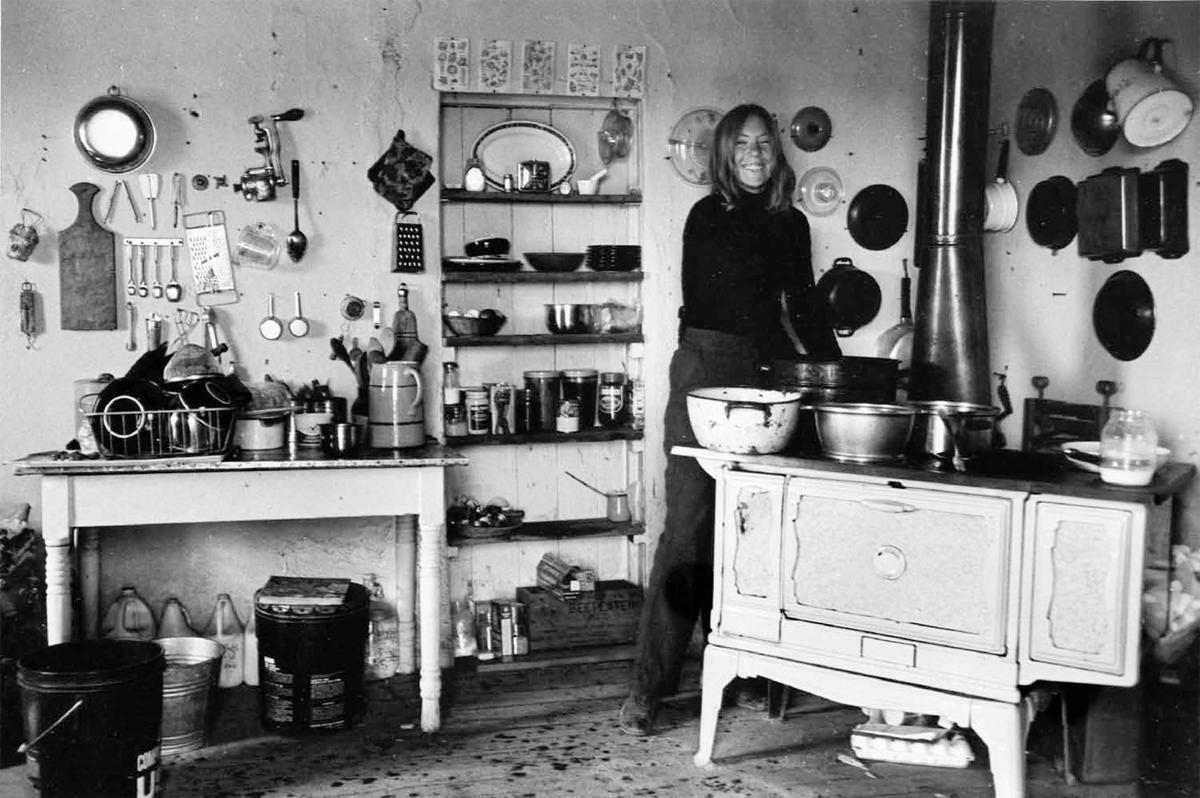 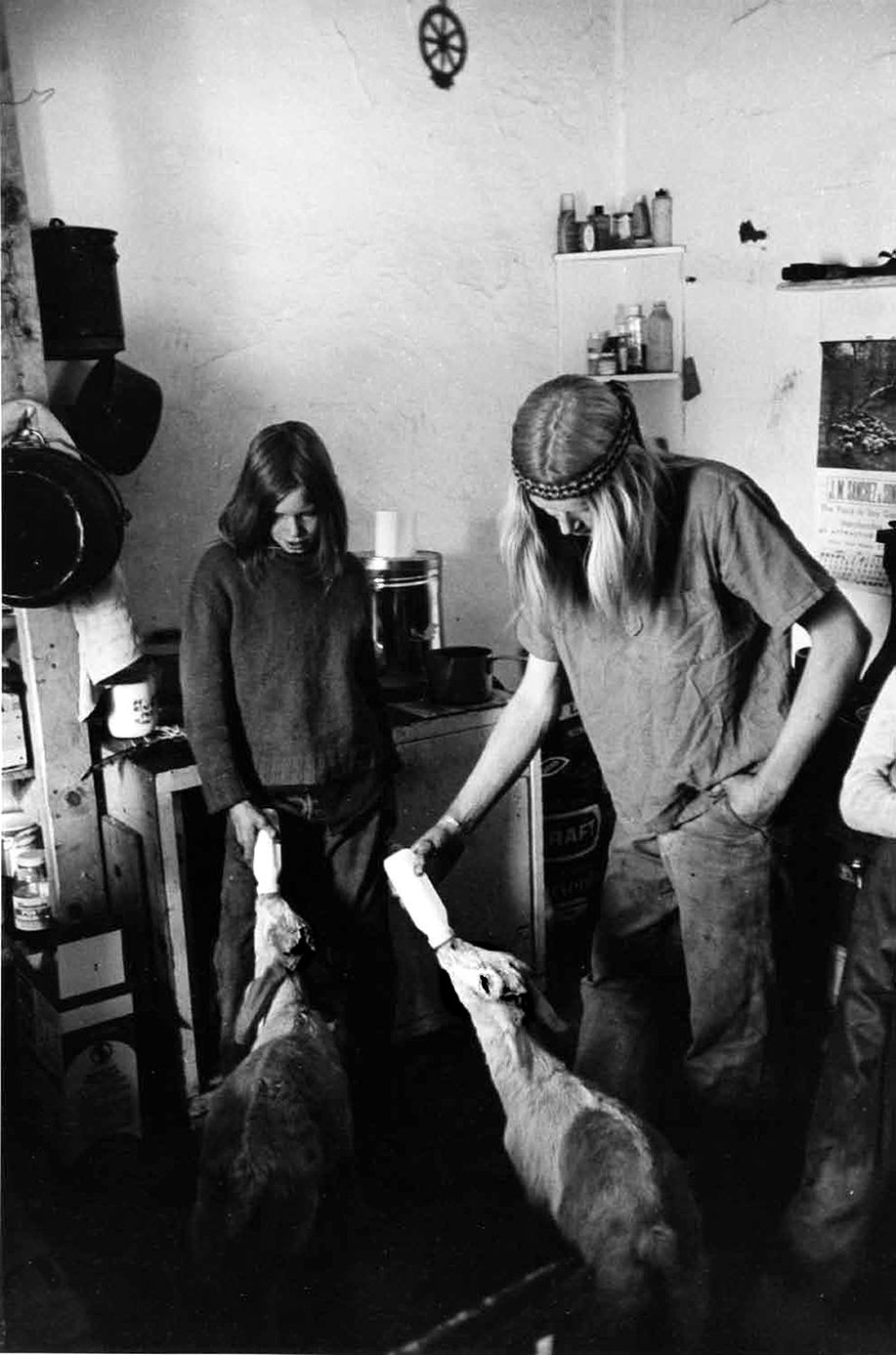 The 80 photos published in Irwin Klein and the New Settlers: Photographs of Counterculture in New Mexico offer a stunning glimpse into an American subculture. Unfortunately, they also represent the totality of the photographer’s portfolio on the subject. “All of Irwin’s negatives were lost after his 1974 death. This was the whole series,” said his nephew Benjamin Klein, who edited the new book from the University of Nebraska Press. “I had to do all the identifying of the subjects and locations because the negatives, the contact sheets, the cameras — all that was gone.” The photographer’s archive is limited to several handfuls of prints in the collections of the Palace of the Governors, the Museum of Modern Art, and a few other institutions.

The images in New Settlers show the counterculturists (called hippies by the establishment media) chopping wood, making adobes, milking goats, weaving, harvesting corn, tending sheep, and preparing food, with a good smattering of portraits and candid shots of commune members in Northern New Mexico. All the photos are reproduced from prints. “Philippa Klein, Irwin’s youngest daughter, came down from Montreal with some of the prints, and then Irwin’s friend Stephen Karetzky had a number of the prints that he’d been carrying around for years. After Irwin’s death he made a concerted effort to publicize Klein’s work. He went to the Museum of Modern Art and Eastman House in Rochester, and there was no interest.”

The exception is a photo titled Minneapolis Fire, 1962, which was purchased by MoMA and is considered his signature shot.

Klein was no amateur. His trajectory as a serious photographer is obvious in the composition, focus, lighting, and selective scope of the New Settlers images. At New Buffalo, the Hog Farm, Lama, and other communes, he was as much a witness as a participant. “He was older, too,” Ben Klein said. “He was born in 1933, so he hung out with the beatniks in Greenwich Village, and he went to jazz clubs, and by the time people were dropping out and going to New Buffalo, he was much older, and he had that intellectual detachment.”

Klein used a Brownie camera and did his own film developing and printing as a teenager, and then he got into landscape photography during five summers spent as a fire lookout in Montana. In the mid-1960s, Modern Photography magazine published three of his images, and two — Minneapolis Fire and “Super-Pop” Artists — went to MoMA. He thought of himself as a street photographer. He told Modern Photography editor Patricia Caulfield, “I enjoy nothing so much as losing myself in the contemplation of familiar objects: people sitting around and the drift of the streets.”

He visited Northern New Mexico beginning in late 1966, “just before the trickle of hippie migrants began to swell to flood stage,” according to the book’s introduction by historian Michael William Doyle. The Taos area would soon be an epicenter for countercultural collectives, but some of the “satellites” in neighboring counties are also important to the story.

For the book project, Ben Klein was in touch with “a phenomenally large number of people: Arty Kopecky and Lisa Law and Pam Hanna, just friends of friends. I could never quite crack Mora. [The writer] Charles Poling had told me that Mora was even more off the grid than other parts of New Mexico. The Five Star Commune wound up in Mora, and my father [Alan Klein] had the perspective that Irwin was really intrigued with the folks from Five Star. It had started out south of Taos at the hot springs and wound up in Mora. The story my dad told me is that they had gotten some money from Jack Nicholson, just in support, like, ‘Hey, you guys are great, keep going.’ This whole project was trying to substantiate stories and hazy memories, and a number of the people I was in touch with are rather proprietary about the past.”

That could be seen as unusual, because the hippies were often deliberately provocative — which is why they were good photographic subjects: They were not hiding. Even the more introverted people were exulting in their experiences and their progress. “Right,” Ben Klein responded. “It’s just that it’s their lives and their experiences and they have a certain perspective. And of course it’s filtered through what’s happened since then.”

Cultural critic Lois Rudnick, in her chapter titled “The Great Hippie Invasion,” tells us that Beat-generation writers Gary Snyder and Gregory Corso were among the counterculture figures who preceded the hippies in the Taos area during the 1950s. In the next decade, thousands of young people moved to the vicinity to form approximately 30 communes. These people generally sought a lifestyle in harmony with nature, rejected materialism, and prioritized communal self-reliance and the expansion of consciousness. Members of New Buffalo, near Arroyo Hondo, perhaps the “archetypal hippie commune,” used peyote as a sacrament, prayed at meals, and worked hard at agriculture and sustainable, self-sufficient living.

Klein documented what he described as “the dropouts, utopians, and renegades” living in rural towns in Taos, Rio Arriba, and Mora counties. In El Rito, for example, some settlers found something worthy in their search for anti-establishment alternatives. Others “discovered that their often casual notions of adopting traditional village ways and ‘Indian’ culture were unworkable fantasies.” And although peace and love were generally at the heart of the counterculture, the settlers’ more traditional neighbors were not unaffected by the invasion. One section of Rudnick’s essay relates the animosity from Hispano residents, many of whom denigrated the long-haired counterculturists and their sexual freedom and use of hallucinogens. “Individuals who sold property and water rights to hippies were regarded as betrayers of the people,” Rudnick writes.

In the book, we see photos shot in places not often associated with the counterculture, among them Mora, Guadalupita, Tesuque, and El Rito. “My dad first came out to El Rito in the spring of 1967,” Ben Klein said. “The story is Irwin was coming back from San Francisco. He had been hanging out at the Zen Center taking photographs and ... he had a friend, LP, who was hanging out in El Rito, so Irwin stopped there on the way back to New York. My brother and I went out to live with my dad in El Rito in the summer of 1969. Then my dad drove back to New York with two friends and me and a large dog in a VW Bug. I was only nine. That road trip is the best story I have of Irwin and my strongest recollection of him. There must have been a couple of other trips to El Rito, and then I spent a summer at Lama in summer 1974.”

Rudnick calls Lama “a rare example of the coexistence of East and West” because of the community’s pan-religious ethos. It is also unique because it has survived; Lama Foundation today is “a non-profit organization and spiritual home to many.”

The term “new settlers” in the book’s title was coined by Irwin Klein to describe counterculturists in New Mexico from the late 1950s into the ’70s. “The term encompasses a wider range of people,” his nephew said. “It changes our notion of people who were of a particular age who were protesting the war, and so I think it complicated our understanding and gives it more resonance and nuance. ‘Hippie’ is such a loaded term.”

Irwin Klein, who died not long after the photos were taken, had planned to publish a book. He acknowledged that it would be easy to view it as merely “a collection of photos of hippies, of an in-group or cult.” But he prioritized the adventure embodied by his subjects as “part of a timeless movement, the perennial attempt of human beings to renew the pattern of their lives.” ◀

“Irwin Klein and the New Settlers: Photographs of Counterculture in New Mexico” was released by University of Nebraska Press in June 2016.

The hippies were often deliberately provocative, which is why they were good photographic subjects: They were not hiding. Even the more introverted people were exulting in their experiences and their progress.