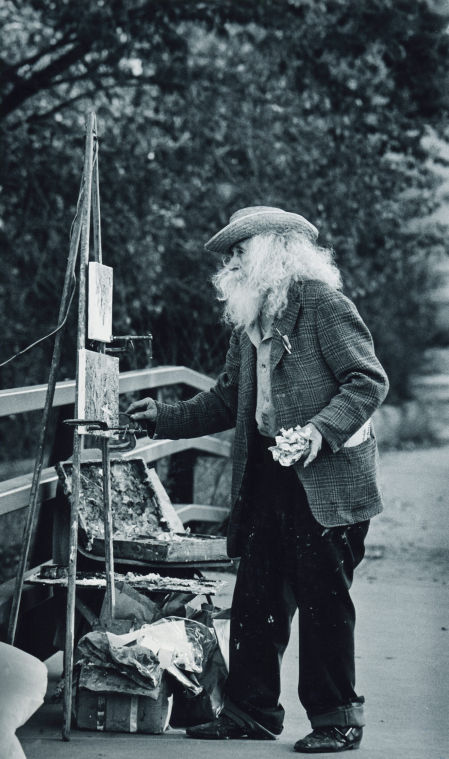 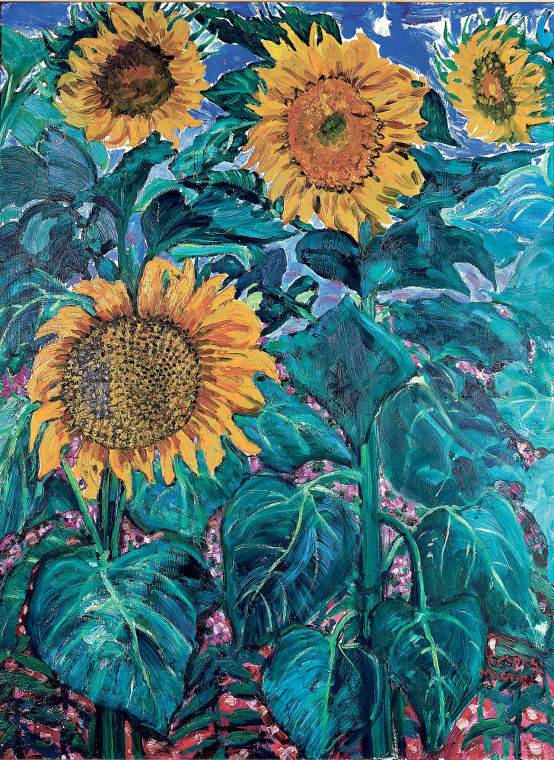 Tomaso Silvestre Macaione is on a roll these days. Though the artist died in 1992, he is being honored for the third year in a row by an official city proclamation. Nov. 13 is “Tommy Macaione Day,” a date that corresponds to what would be his 106th birthday. “His message of rejoicing in our differences to build a stronger community is as relevant now as it was during his lifetime,” Mayor David Coss’ proclamation reads.

Longtime Santa Feans remember Macaione as “El Diferente,” one of the town’s most colorful characters, who was known for his equally colorful, post-impressionistic impasto paintings of flowers and landscapes. As gallery owner Nedra Matteucci told Pasatiempo, “He was kind of the van Gogh of Santa Fe.” Today, Macaione is immortalized in sculpture in a Marcy Street park that bears his name, though many call it simply “Artist Park.” He probably wouldn’t have minded the anonymity of this designation, as it confers upon him the title of “the artist.”

Despite his diminutive stature and solitary lifestyle, Macaione had a larger-than-life presence in Santa Fe for nearly 40 years. Born in New London, Connecticut, in 1907 to a father of Greek descent and an Italian mother, Macaione moved to Sicily after his parents separated during his childhood. There, he began studying the old masters with such passion that, as he told New Mexico Magazine in 1980, “I would forget to eat. Still do.” In 1922, he returned to New London. Soon he was studying art more formally with a Yale University graduate student and later at the Art Students League in New York and the Rhode Island School of Design. During World War II, he served in the U.S. Army Signal Corps and learned barbering on the side, a profession that helped support his art for more than 25 years.

His 1952 arrival in Santa Fe was unintentional. Originally on a pilgrimage to San Francisco to visit retrospective exhibits on Matisse and van Gogh (one of his favorite artists, who “had it easy,” as he was fond of saying), he argued with his traveling companions and was left in Florida. Macaione resumed the trip, hitchhiking as far as Santa Fe and working as a dishwasher at the old Mayflower CafÃ© to save money for a bus ticket to California that he never ended up buying. In 1962, he ran for mayor of Santa Fe â€” his first of many unsuccessful political campaigns.

The artist quickly became a familiar figure in his new surroundings, whether at his easel on the Plaza painting St. Francis Cathedral, alongside Hyde Park Road painting aspens, or in the vicinity of his favorite neighborhood gardens, painting irises, lilacs, and sunflowers. His passion for plein-air painting was not entirely appreciated at first in the town’s lingering Wild West atmosphere. Once, when painting a garden on Acequia Madre, he was scared off by the property owner, who fired a pistol in the air in his flowers’ defense.

Though something of an outsider by choice, Macaione was a member of Santa Fe’s midcentury arts community, even if not universally acknowledged as such. He was fond of telling how he serenaded Georgia O’Keeffe in Furr’s cafeteria, back when the restaurant had a grand piano. Though she paid him no attention during his hour-long performance, he recounted the experience to close friends with an air of triumph.

The artist embraced poverty his entire life. Even after his work developed a following, he never took the steps necessary to capitalize on success. During the 1970s, he would give still-wet paintings to a close friend who taught at Santa Fe High School. The friend would display them in the teachers’ lounge, where they would frequently sell before the paint dried. Macaione also exchanged paintings for food or services. A close friend estimated that Macaione’s veterinarian, Dr. Richard Peterson, received close to 90 paintings.

Macaione’s personal menagerie was always large, but by the 1980s it had grown large enough to require official — though delicate — intervention. In 1982, Mayor Louis Montano publicly appealed to residents to help the artist find homes for his pets. If the city fully enforced its animal-control ordinances, Montano cautioned, “the old man will die. … He’s an institution in this town. The man is very kind and he’s very concerned, and we want to help him.”

The ’80s were also when Macaione began to get more widespread recognition as Santa Fe’s unofficial St. Francis-like patron saint of the arts. Gov. Bruce King organized an exhibition for Macaione in 1982 — the first large-scale show of the artist’s career. The day after the opening, a front-page article in The New Mexican showed a grinning Macaione hugging King while wearing the gold blazer and yellow shirt he bought for the occasion from the Society of St. Vincent de Paul.

More honors accumulated. In 1985 he was recognized as a Santa Fe Living Treasure. In 1987, the Museum of Fine Arts (now the New Mexico Museum of Art) hosted his 80th-birthday celebration, which reportedly drew hundreds of well-wishers. The Santa Fe Reporter commemorated the same birthday with a cover story, in which Macaione boasted that he could still complete two paintings a day despite his advanced age: “I can paint like a house on fire!”

In addition to painting, Macaione continued running for public offices both high and low. In 1988, a billboard along Interstate 25 appealed to motorists: “Beloved voters, if you believe in world peace, general well-being and fairness, write in your vote for USA president Thomas S. Macaione.” The prospective candidate outlined his platform “for Governor or President” in an open letter from the same period. His party, the Mutual Happiness Society, was devoted to art, agricultural concerns, disarmament, free lunches for schoolchildren, and eliminating racial prejudice. “I will, of course, never stop painting or sculpturing on the days of rest that a governor is allowed,” he wrote.

During his final years, Macaione continued to enjoy small-town fame. Photographer James Hart, who became a friend after being hired to document the painter’s work, remembered driving Macaione to the grocery store and on similar errands. “Every place we took Tommy, everyone would stop what they were doing and come say hi. And he loved it. He was very generous.”

Macaione died in 1992. His work can be found in public and private collections across town, including at City Hall, The Shed restaurant, and the offices of The New Mexican. Most recently, the city obtained one of Macaione’s largest works to display in its new offices at 500 Market St. in the Santa Fe Railyard. The 8-by-8-foot oil on masonite painting is unusual in that it combines magnified floral imagery with a distant mountain background. Though Macaione called it his “million dollar mural,” he would probably have been pleased to know that it was donated to his beloved city for free. As his estate representative explained, “It’s a gift, from Tommy.”  ◀

A story that ran in Pasatiempo’s Nov. 8 issue about late artist Tommy Macaione contained an account of his large collection of pets that suggested they were all well cared for and fed. However, that contradicts reports published during the artist’s lifetime that Macaione hoarded pets, keeping houses full of stressed, malnourished and neglected animals. In 1984, animal control officers rounded up more than 50 dogs and cats from Macaione’s home, of which 28 disease-ridden animals subsequently were euthanized at the local animal shelter.

I have a Tommy M painting for sale along with a hand written letter. It is a small painting (8 x 11) of the coal mine chute in Madrid. Was done in 1982 per the letter.
Bigblu4u@yahoo.com.