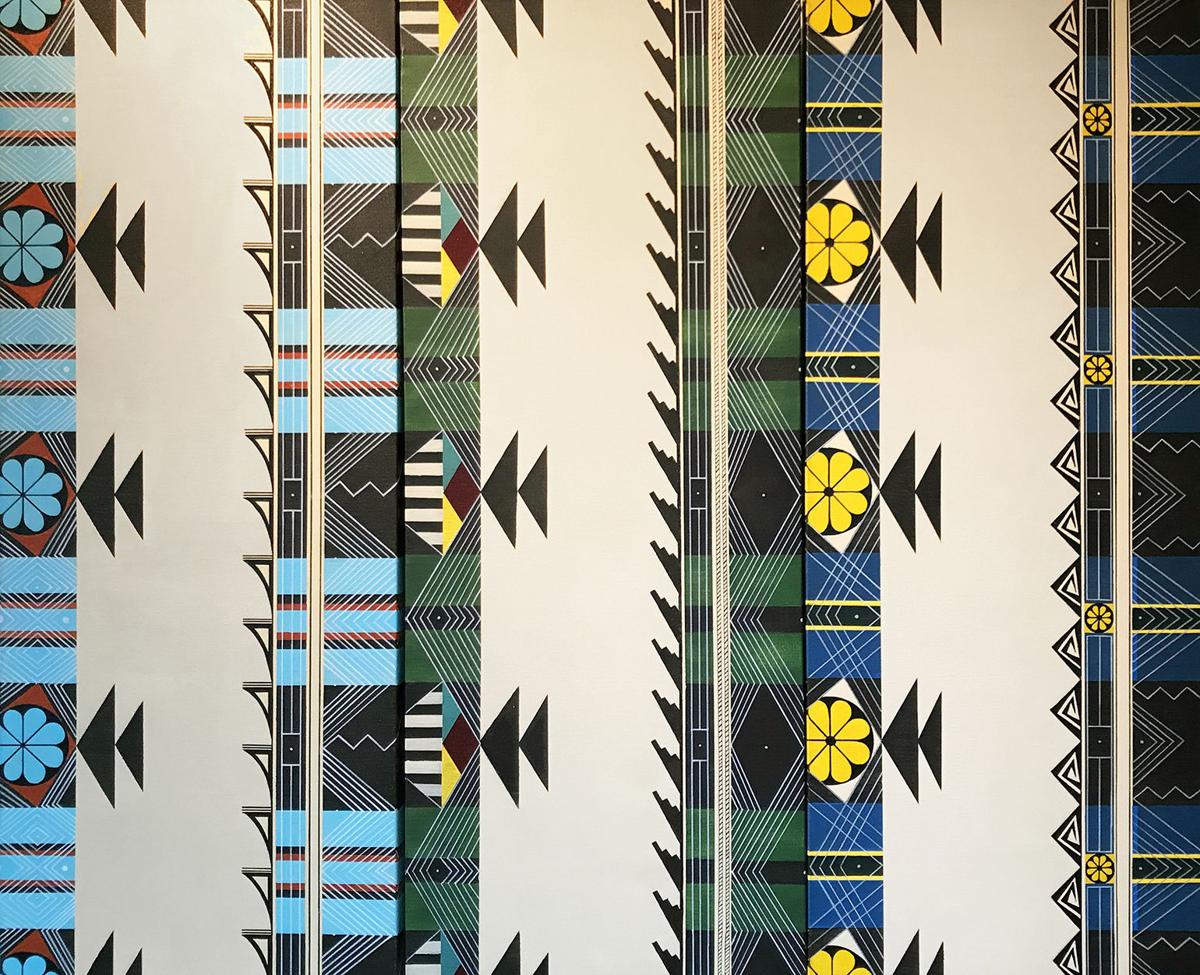 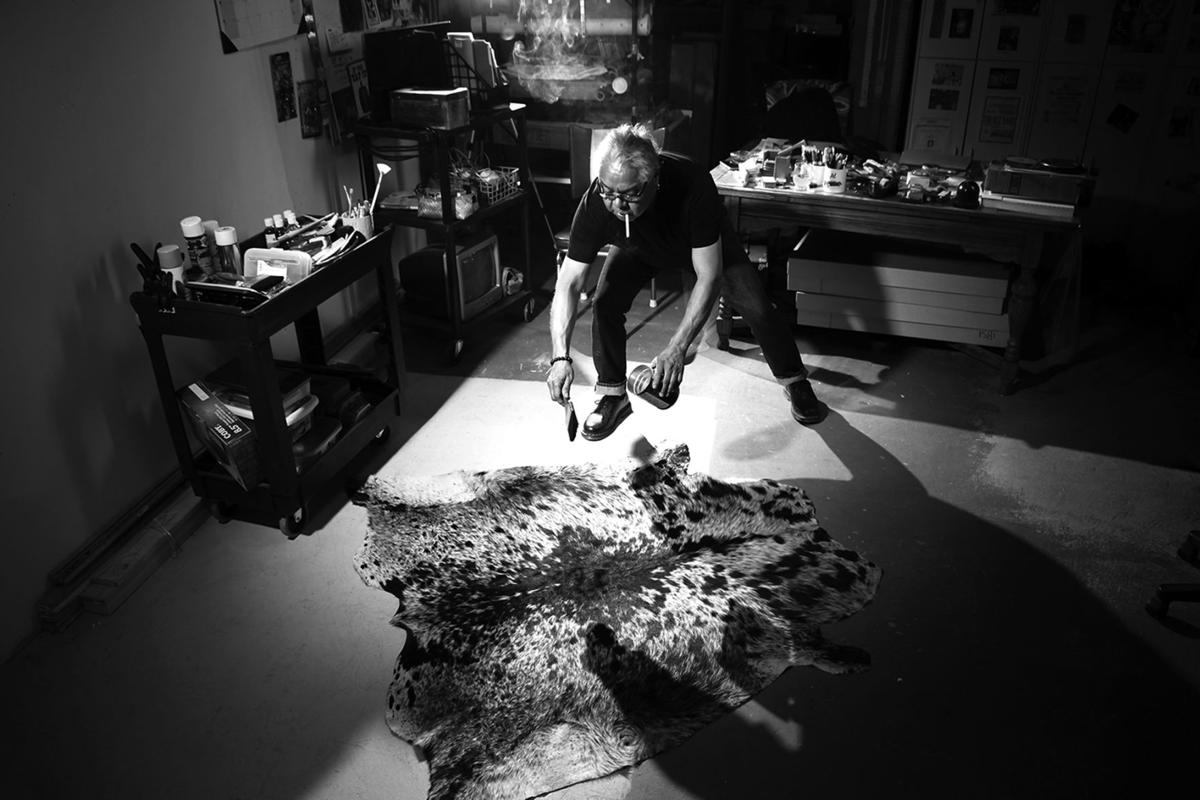 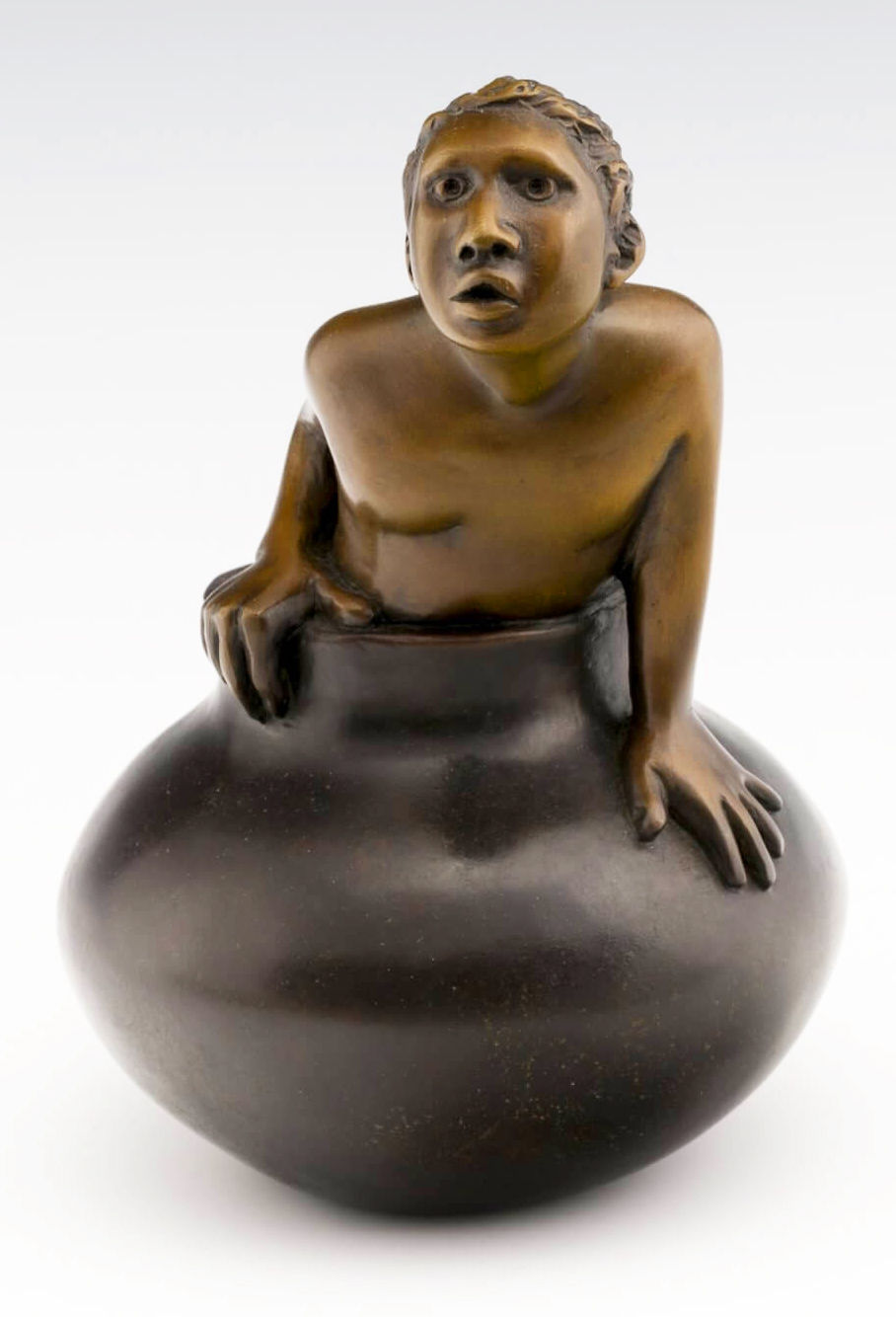 The winter season brings a host of new exhibitions to the IAIA Museum of Contemporary Native Art. The main exhibition, Without Boundaries: Visual Conversations, staged in the Anne & Loren Kieve Gallery and Fritz Scholder Gallery, has an underlying theme of social action. The show was guest-curated by Iñupiaq and Athabascan artist Sonya Kelliher-Combs, whose own work often incorporates organic elements such as animal skins and sinew, as well as imagery that relates to the personal and collective experiences of Alaskan Natives. Her aesthetic seems to have influenced the selection of works for the exhibition — particularly Yup’ik artist Emily Johnson’s installation of luminous fish-skin lanterns, which reflect not only an artistic but also an economic use of resources. Johnson, a dancer, choreographer, and performance artist, originally created the lanterns for use in performances, but they may also serve a utilitarian purpose. The lanterns on view were made in workshops where she taught participants how to sew salmon skins. Her work serves as an example of community engagement.

Without Boundaries highlights several contemporary issues that impact Native communities. Themes of social and political awareness are dealt with directly through various mediums. Eastern Band Cherokee basket maker Shan Goshorn, for instance, blends traditional fiber art techniques and contemporary mediums, including printed materials and photographic materials, to address cultural appropriation and Native stereotypes. Her Collectibles from 2017 is a well-crafted woven vessel with what look like images derived from postcards of Natives in seemingly traditional and dance regalia. Such images are often sold to tourists and don’t always reflect an honest view of contemporary Native peoples. The title, too, seems a critique of the fetishism that sometimes drives the casual collector of Native art and artifacts.

Other artists in the show include Barry Pottle (Inuk), Charlene Teters (Spokane), Edgar Heap of Birds (Southern Cheyenne), and James Luna (Payómkawichum and Luiseño). Luna, a performance and installation artist, often uses humor to instill biting commentary into his works — they can get you laughing but also make you think. A small installation of Luna’s from 2016, James Pollock, is included in Without Boundaries. The work comprises a digital photograph, a cowhide, a paint can, and a brush. The photograph shows Luna mimicking the iconic image of Jackson Pollock hunched over a “drip painting” on the floor, brush in hand, a cigarette dangling from his mouth. In Luna’s version, the canvas has been replaced with the cowhide, on which the artist has been painting spots. The piece reflects the issue of cultural appropriation, which is ever-present in the art world. Pollock himself cited Navajo sandpainting as an influence on his method of painting on the floor, which freed him to work from all sides of a composition and immerse himself in the image. Often, cultural appropriation in the arts goes unacknowledged, extending beyond mere influence to outright theft. Luna’s piece also reflects the challenges that contemporary Native artists face in separating themselves from traditional roles. In this context, the animal hide acts as a cultural marker.

There is an inherent didacticism in an exhibit like Without Boundaries, where the artworks, aside from their aesthetic forms and presentations, also serve as teaching moments, deepening an appreciation for the cultural milieu in which they were created or which they express. The works edify while visually engaging us.

Harjo served as Congressional Liaison for Indian Affairs under President Jimmy Carter and is a former president of the National Congress of American Indians. In 1984, she founded Morning Star Institute to promote sacred land claims, Native rights, and artistic expression. In 2011, she received an honorary doctorate from IAIA. Among the works on view are several portraits of Harjo. One, by Bradley, is an atypical portrait done in mixed media, affixed with horse-hair tassels and elk teeth and patterned with Native symbols and motifs. The 2009 painting of Harjo by incarcerated Native activist Leonard Peltier (Turtle Mountain Chippewa, Dakota Sioux), who studied under Bradley, is a more straightforward portrait.

In a statement, Meredith describes her 2005 painting Government Job as “an imagined psychological portrait” of her father as a young idealist, new to Washington, working as an activist on behalf of Native peoples. She depicts him as a lowly worm in an apple-shaped automobile, facing off against a titmouse who warns, “Don’t upset the apple cart.” Her statement explains the symbology of the bird. “In Cherokee culture, a titmouse is regarded as a traitorous bird who will fight its own kind for a crumb.”

The fact that the newly acquired works come from the collection of an activist makes Art & Activism a fitting adjunct to Without Boundaries, and the shows have shared themes as well, such as cultural appropriation and Native identity. Creek artist Steven Deo’s The Indoctrination, for instance, shows a photograph of a group of children at the infamous Carlisle Indian Industrial School in Pennsylvania during the late 19th century. The same image is repeated throughout the composition. The Carlisle is a de facto emblem of cultural genocide, a boarding school where children were forced to give up their Native languages and customs and made to adopt Western European practices. The final image, more faded than the others, is tacked on to the far-right side of the work, and its washed-out image evokes the erasing of the children’s heritage.

In the museum’s Honor Gallery and hall are murals by Sydney-based artist Rolande Souliere. The mural installation, Form and Content, is based on the visual affinities between indigenous languages and symbols and geometry in Western art and culture. Souliere was born in Toronto and is of Michipicoten First Nation heritage. Her murals incorporate bold graphics and strong colors, and she uses basic geometry to recreate Ojibwe, Cree, and Inuit syllabics. The hall mural extends from floor to ceiling and was made using a series of alternating yellow and orange lines, parallel lines, and symbols rendered in bands of black and white that expand from its center. In the Honor Gallery, two murals face each other on opposite walls, incorporating diamond patterns within vividly colored ovoid shapes. Souliere’s work presents the elements of language as abstract designs.

The institute’s annual BFA show, in the South Gallery, gives graduating seniors the opportunity to showcase their work in a museum environment. The title this year is Breaking Ground, and the show highlights themes including personal histories, politics, and indigenous heritage and culture. David Naranjo’s (Santa Clara Pueblo) painting Pueblo Textiles/Embroidery #1, #3, #5, from 2017, draws from the colors and patterns of women’s dress. Chad Browneagle (Shoshone Bannock, Spokane) has two drawings in the show: Long Hair Don’t Care and the sardonic America’s Great Again. Both are from 2017 and address current politics and the failure to address indigenous concerns and injustices against minorities. Haley Greenfeather English’s (Red Lake and Turtle Mountain Chippewa) wall mural A Lone Time (2017) is a self-portrait that explores the complexity of identity and difference in the contexts of Native culture and personal experience.

The museum is also showing a suite of films in the Helen Hardin Media Gallery in a program called “The Abundant North: Alaska Native Films of Influence” (through June 3). The series of short films was arranged in collaboration with the University of Alaska-Fairbanks and includes titles by UAF students and faculty. The presentation was curated by UAF associate professor in film and performing arts Maya Salganek. Also on exhibit is Action/Abstraction Redefined, which opened last summer and continues through July 7, 2019. The show is a selection of works from MoCNA’s permanent collection that were made in the 1960s and ’70s.