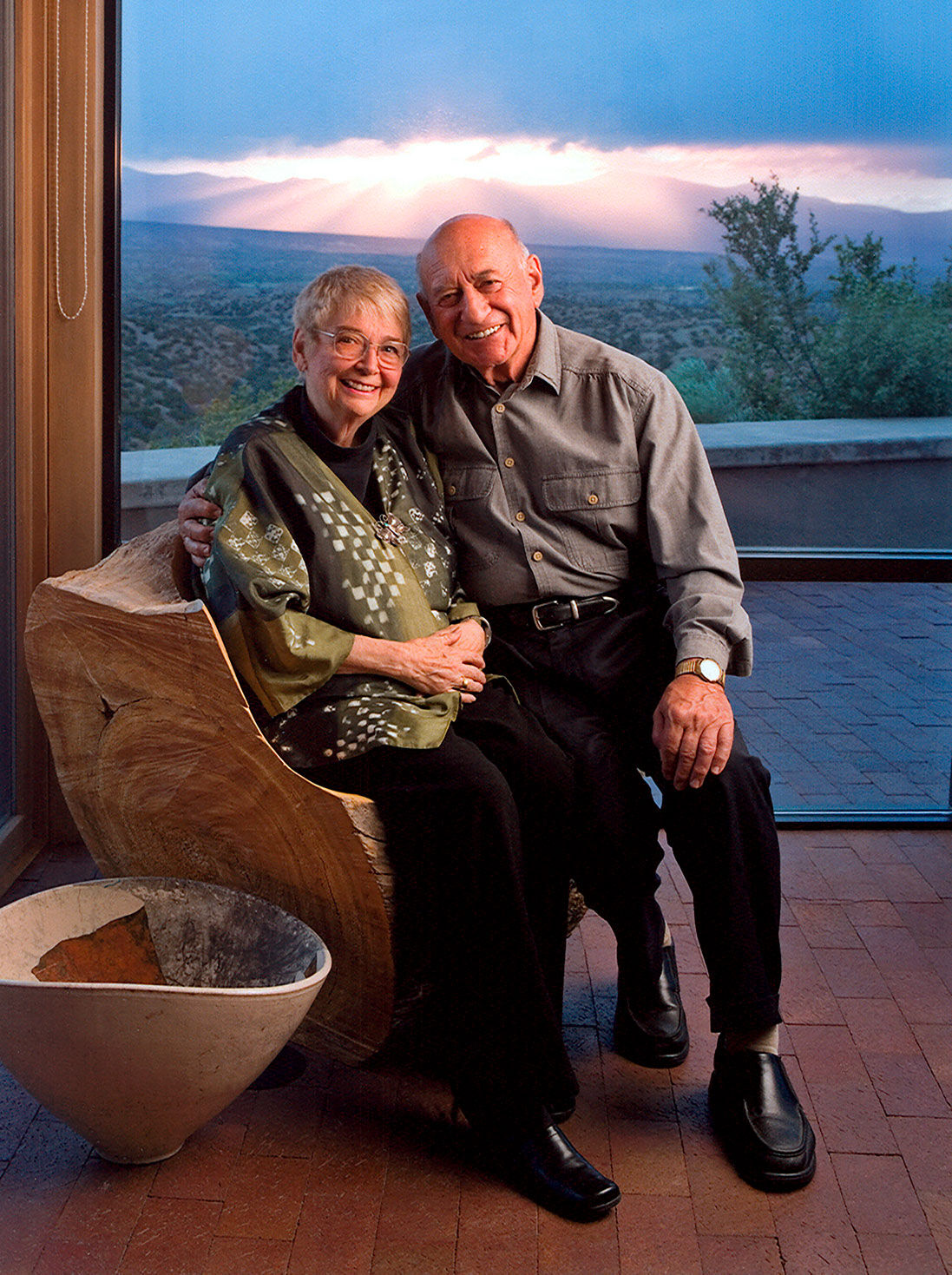 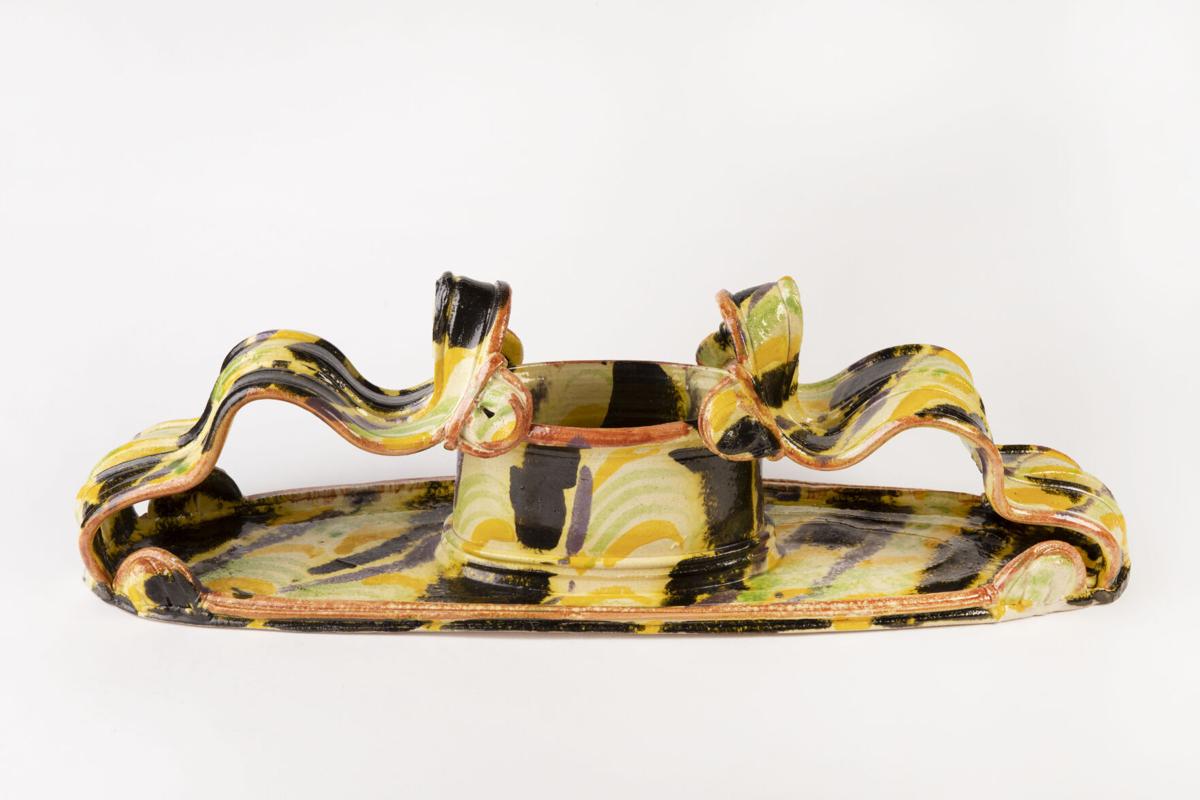 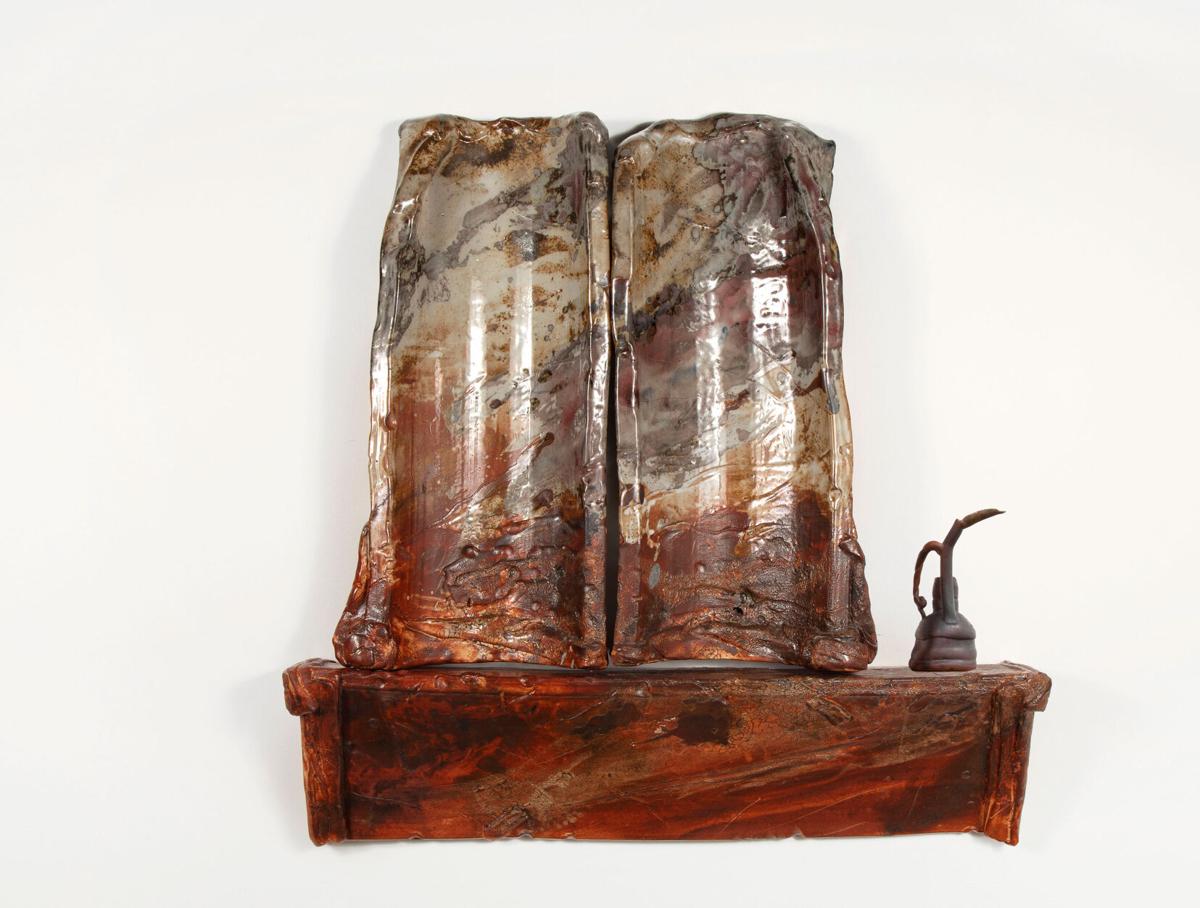 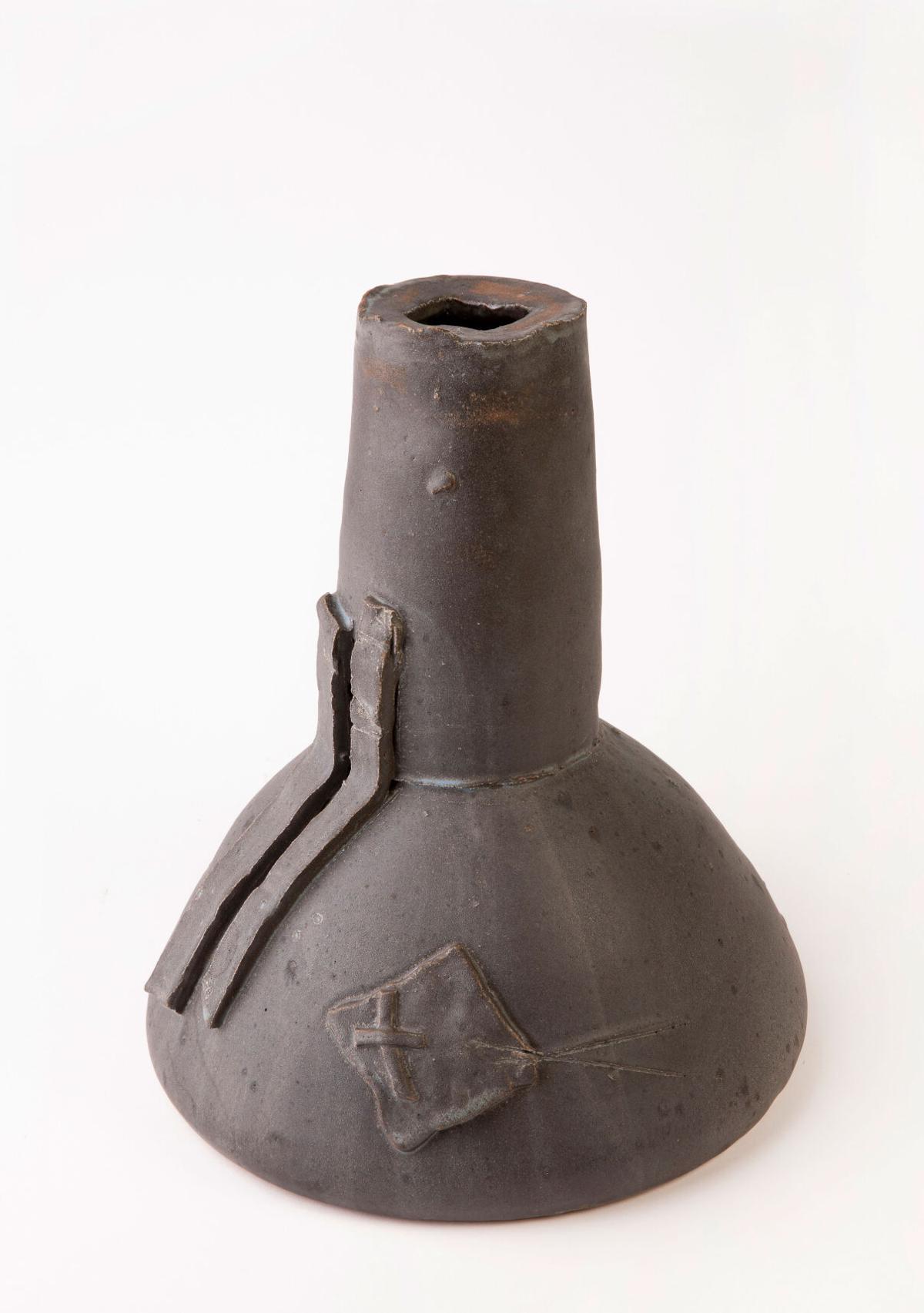 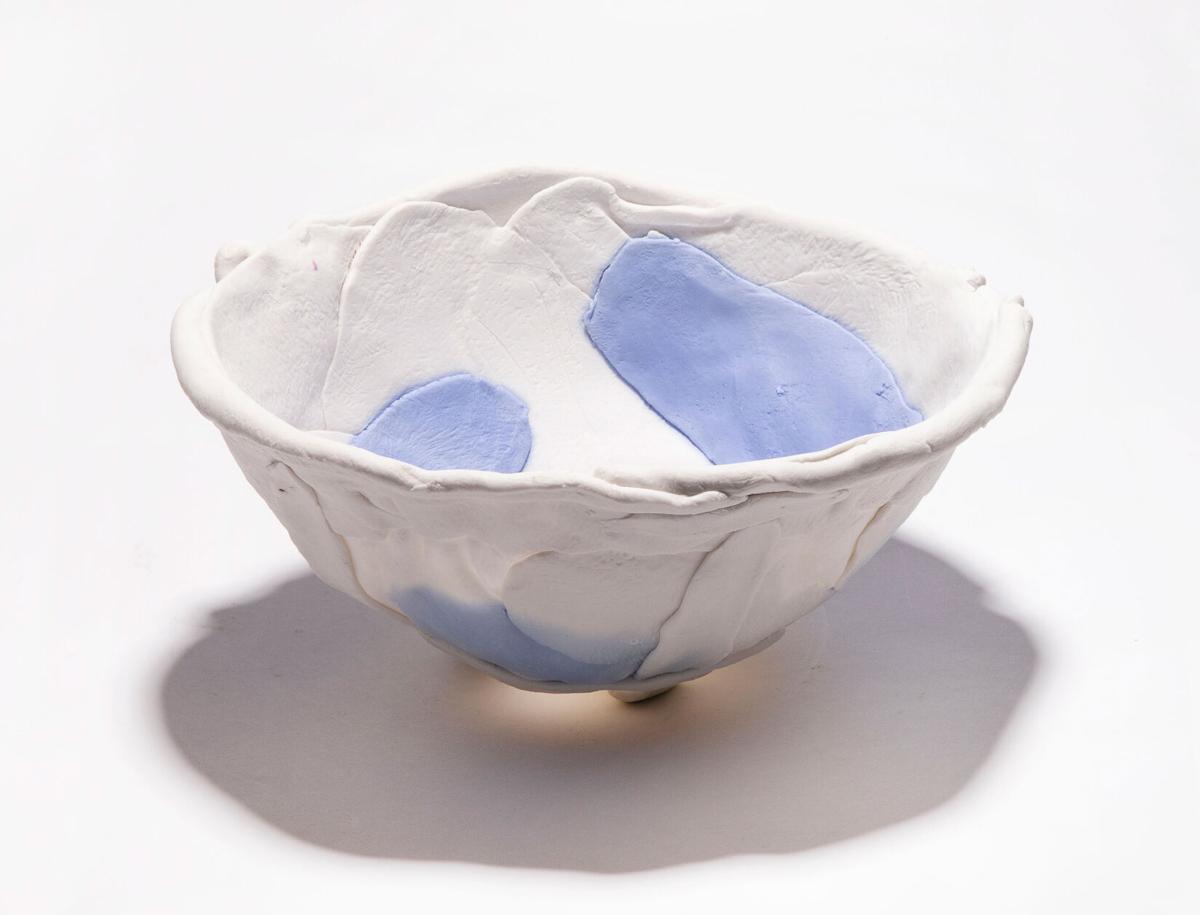 Ceramic art is rooted in the vessel.

Even in a sculptural object like John Glick’s (1938-2017) With Hecate... (1994), in which two concave vertical slabs rest on a shelf, all of which are made of glazed stoneware, the cylindrical shape of a vessel form is present. The slabs look like two halves of a stone chimney that’s been rent in two and opened like a book. On the shelf beside them rests a smaller vessel that looks like an antique oil can, much like the one used by the Tin Woodman in The Wizard of Oz.

Artists today often make work that doesn’t reference the millennia-old tradition of using clay for functional wares and, instead, create work that’s intended from the outset as sculptural. But there was a period in American art when experimenting, as Glick did, with the form of utilitarian objects resulted in work that straddled the line between functional craft wares and high art.

Artist Ken Price (1935-2012), for instance, retained an interest in working with vessel forms throughout his career. He is best known for his abstract sculptural forms, and less so for his cups, mugs, pots, and teapots. But a recurring motif, even among his sculptures, is an opening — or mouth, you could call it — which makes them, in essence, vessels.

Glick and Price are two of 16 artists included in the exhibition American Legends of Ceramic Art 1975-1995: The Barbara and Ed Okun Collection of Ceramic Art, on view by appointment at the Santa Fe Art Auction (932 Railfan Way, 505-954-5858, santafeartauction.com) through October. What you see here is not Price’s blocky, angular sculptures, nor the bulbous, organic work he made late in his career, but two Tequila Cup works from 1979. It was around this time that he was making a series of functional objects called Happy’s Curios, which were named for his wife and inspired by small, hand-painted wares he saw on trips to Tijuana, Mexico, and the Baja California Peninsula. They’re humble, rustic vessels with little in the way of an artistic flair, save for a ring of medallions in relief that partly encircle their midpoints and a slight curvature to the vertical sweep of their bodies. These flourishes may be subtle, but they elevate the object to something more than merely being utilitarian.

“The cup essentially presents a set of formal restrictions — sort of a preordained structure, it can be used as a vehicle for ideas,” Price is quoted as saying in the exhibition catalogue. What we see in the exhibition are 37 potentially functional objects redefined as objects of art. Their makers were at the forefront of a shift from craft to fine art.

“The pot is the thing that nobody really looks at as being radical, but there’s a whole history of it,” says the exhibition’s curator Mark Del Vecchio. “All of these guys, I think, reached a certain point round about the 1970s. They were the generation, for whatever reason, who said ‘OK. I want to bump it up. I want to be respected as an artist, but I want it to be on my terms as a potter, as a vessel maker.’ ”

The show includes work by Ken Ferguson, Robert Turner, Warren MacKenzie, Beatrice Wood, Peter Voulkos, and Betty Woodman — all well-known artists today, with work in major collections. They established names for themselves by making pots, platters, bowls, vases, and other vessel forms. “Every one them had retrospectives. They’re all in museum collections. They came from the craft world and got into the art world, and that was a big deal.”

In 2006, Woodman became the first living female ceramist to receive a major retrospective at the Metropolitan Museum of Art in New York. Throughout her career, she worked exclusively with thrown pottery. Her work was inspired by the pottery traditions of Europe, Asia, and the Middle East, but she maintained an interest in the malleability of the material. There’s a fluidity to her work, a hand-crafted look in which the pliable nature of the raw clay is retained. She gave her pieces curious names like Futuristic Bread Basket (1981) and Camellia Pillow Pitcher (1982). The latter’s body has the shape of a stuffed, rectangular pillow affixed with a handle and spout.

“You would never pick that sucker up by its handle,” Del Vecchio says. “But it sits there with its handle and spout saying, ‘Come. Use me. I am about this.’ She puts the perceived function right there in the title. But at this point, it isn’t really about using them. It is about touching them. Objects are about touching. You should rub your hands over them, let your fingers go inside. That is the sexiness of ceramics and the sexiness of form, like a cup that you can pick up and put to your lips.”

Now, you could probably use Woodman’s Futuristic Bread Basket, which is included in the show, as an actual basket for bread, but other objects on view are clearly not intended for practical use. Take Ferguson’s (1928-2004) Monumental Teapot (1983), for instance. Made of stoneware with a Japanese Shino glaze, it does have a perceived functionality. But, as a teapot, it stands an impractical two feet tall. “When you get to 24 inches with a teapot that weighs about 15 pounds, you can take the lid off, you can put the tea and water in, but good luck lifting it up.”

Del Vecchio is an independent curator who was formerly the director and curator at Peters Projects (now Gerald Peters Contemporary) in Santa Fe. He first met Barbara Okun, a fiber artist, art dealer, and gallerist, in the early 1980s when he was director of the Garth Clark Gallery in Los Angeles. “Barbara reached out to Garth, and we used to consign our work to her gallery. That’s how some of the artists got into her collection, like Beatrice Wood and Betty Woodman. But she had her own relationship with people like Ken Ferguson and Warren MacKenzie, and probably Voulkos.”

Voulkos (1924-2002) is represented by just one piece, and it’s an anomaly. Rather than a ceramic work, it’s a small bronze sculpture called a Kiln Doll (1992). It’s about 10 inches high, rough in appearance, and vaguely figurative. “A kiln doll is a little doll — it’s also referred to as a kiln god — that a lot of clay artists would make,” Del Vecchio says. “They would stick it on the kiln while it was firing and it would protect the firing. What Voulkos did one day in 1992 is he took one of the dolls and cast it on bronze. They were never sold to people. You had to know Pete, and Pete would give you one of those.”

Kiln Doll’s presence in the Okun Collection is a testament to the interpersonal relationships they had with the artists they collected.

Barbara Rose Okun (1932-2007) was born in New Rochelle, New York. A graduate of Mount Holyoke College in South Hadley, Massachusetts, she married Ed Okun, her college sweetheart, in 1954 and they settled in St. Louis. Ed Okun (1931-2019) was a renowned retina specialist. Born in Springfield, Massachusetts, he earned his medical degree at the University of Vermont and was a professor of clinical ophthalmology at St. Louis’ Washington University.

An influential couple in the art world, they were known for launching the careers of several artists, particularly in the areas of fiber arts and ceramics.

They lived in a 6,000 square foot home in Tesuque, which housed their art collection. It was after dinner at their house one night when Del Vecchio, an expert in the field of contemporary ceramics, noticed what he regarded as a sizable collection of work by artists who represented what he calls “a quietly radical” period in ceramic art. However, his first exhibition of these collected works wouldn’t be mounted until after their deaths.

“When Barbara passed away, there was like 10 years where Ed was on his own in this massive house. It was a real custom-built job. It wraps around this hill. On one side, you always have a view. But on the other side, you have the rooms and they were full of stuff. When you went out there, it was an adventure. You had to watch where you parked, and there were roads you couldn’t turn around on.”

In his final years, Ed Okun ended up living in town with artist Ciel Bergman (1938-2017). He kept the Tesuque house and its art collection intact. “That’s how I was able to capture this period of time,” Del Vecchio says. “Most of the time, those kinds of collections get dispersed and sold off. The other side of it, too, is that they’re the original owners. The work went directly from the artists into their hands.” And the oldest pieces in the show are just now being seen after more than 40 years.

Del Vecchio was invited to catalogue the ceramic works in the collection by the Okun’s daughter, Roxanne Okun Gray, who manages the estate with her brother Neil. “At that point, I was working at Peters Projects,” Del Vecchio says. “I was going to do the exhibition there. Then the virus hit, and the whole thing got waylaid.”

“I knew every one of these artists,” Del Vecchio says. “I think because they understood the vessel form, they were not afraid of using it. Their work is based on function. They’re about the inside and the outside. You can’t call them sculpture. You have to call them a vessel or a pot.” ◀