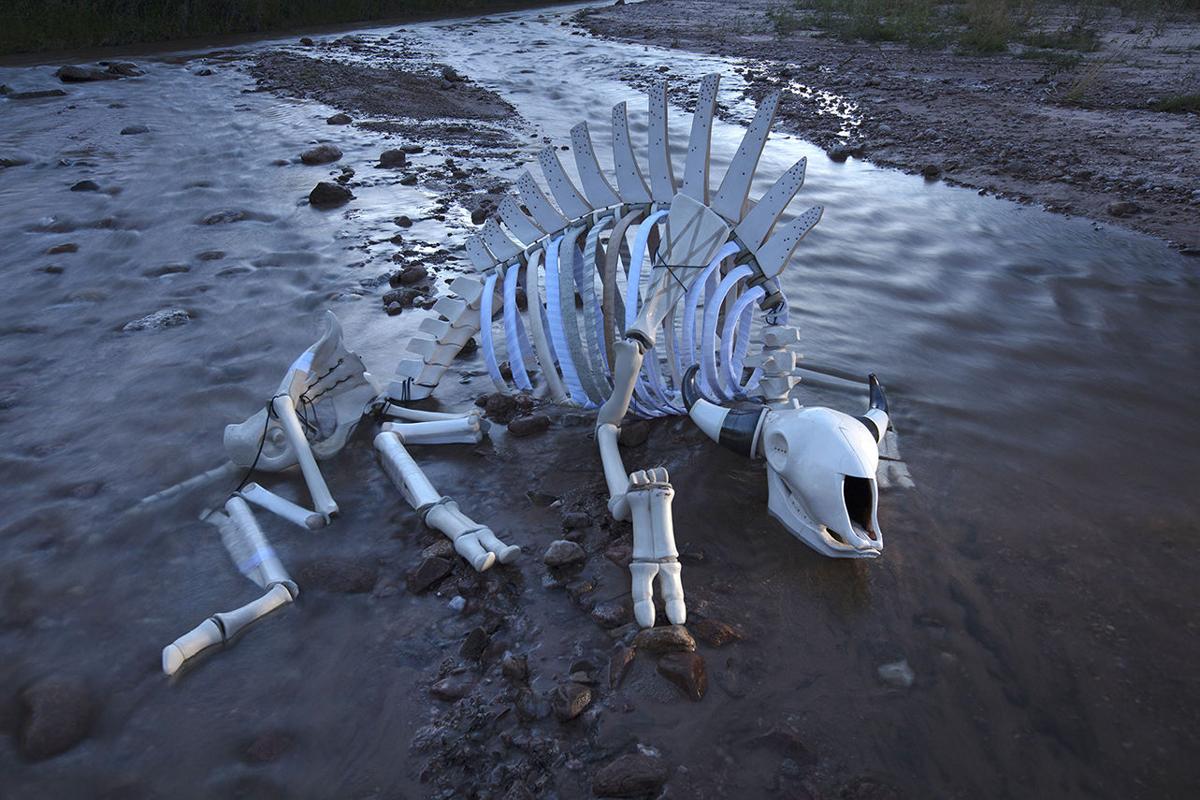 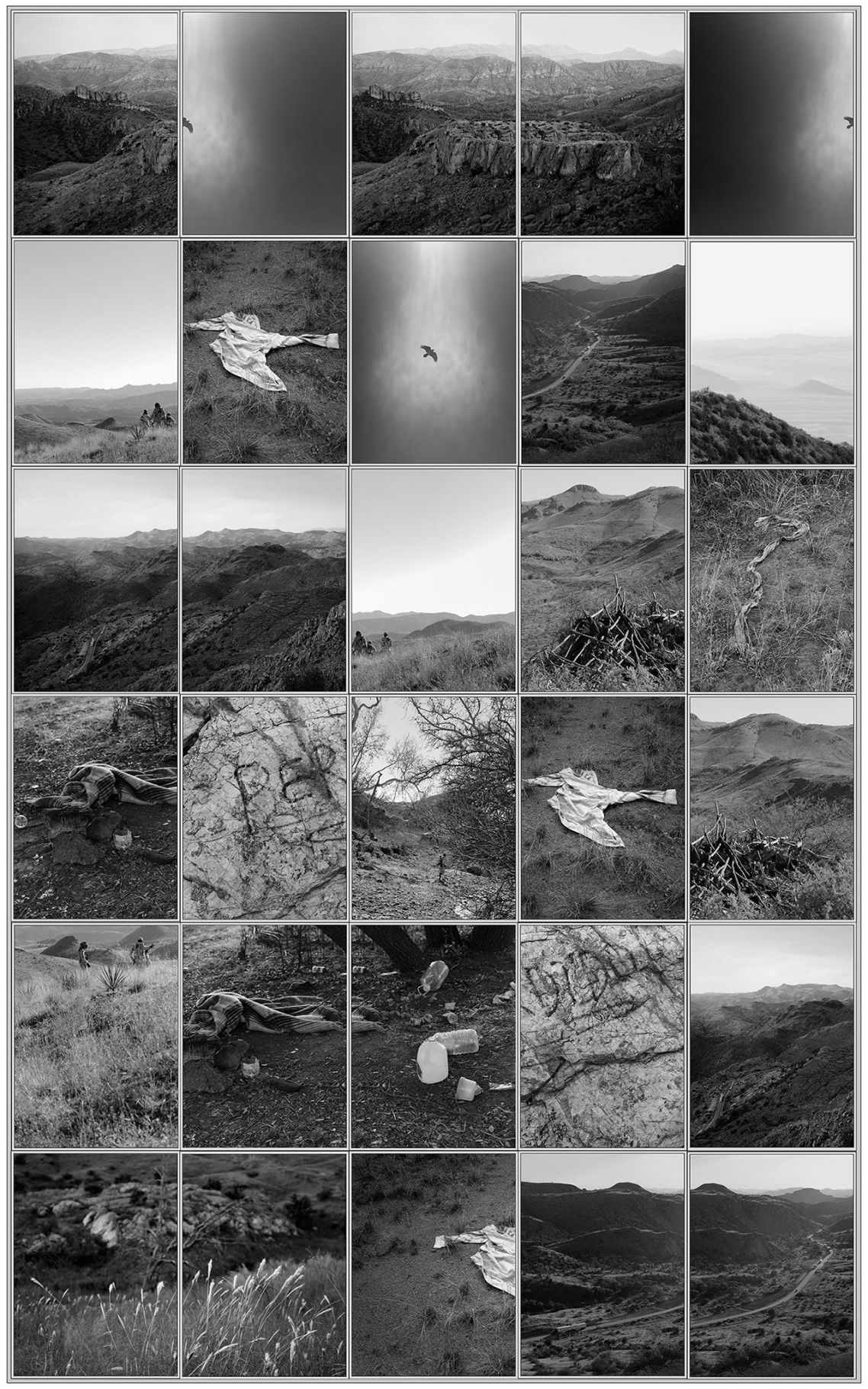 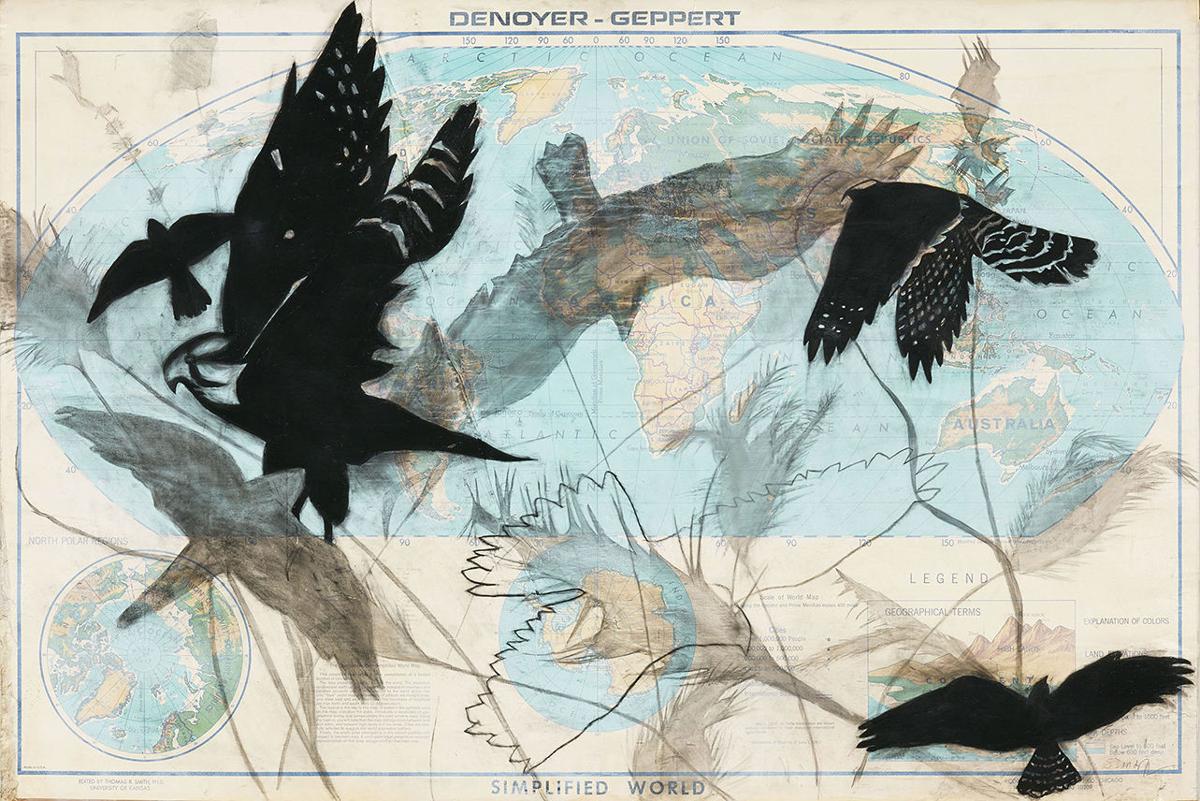 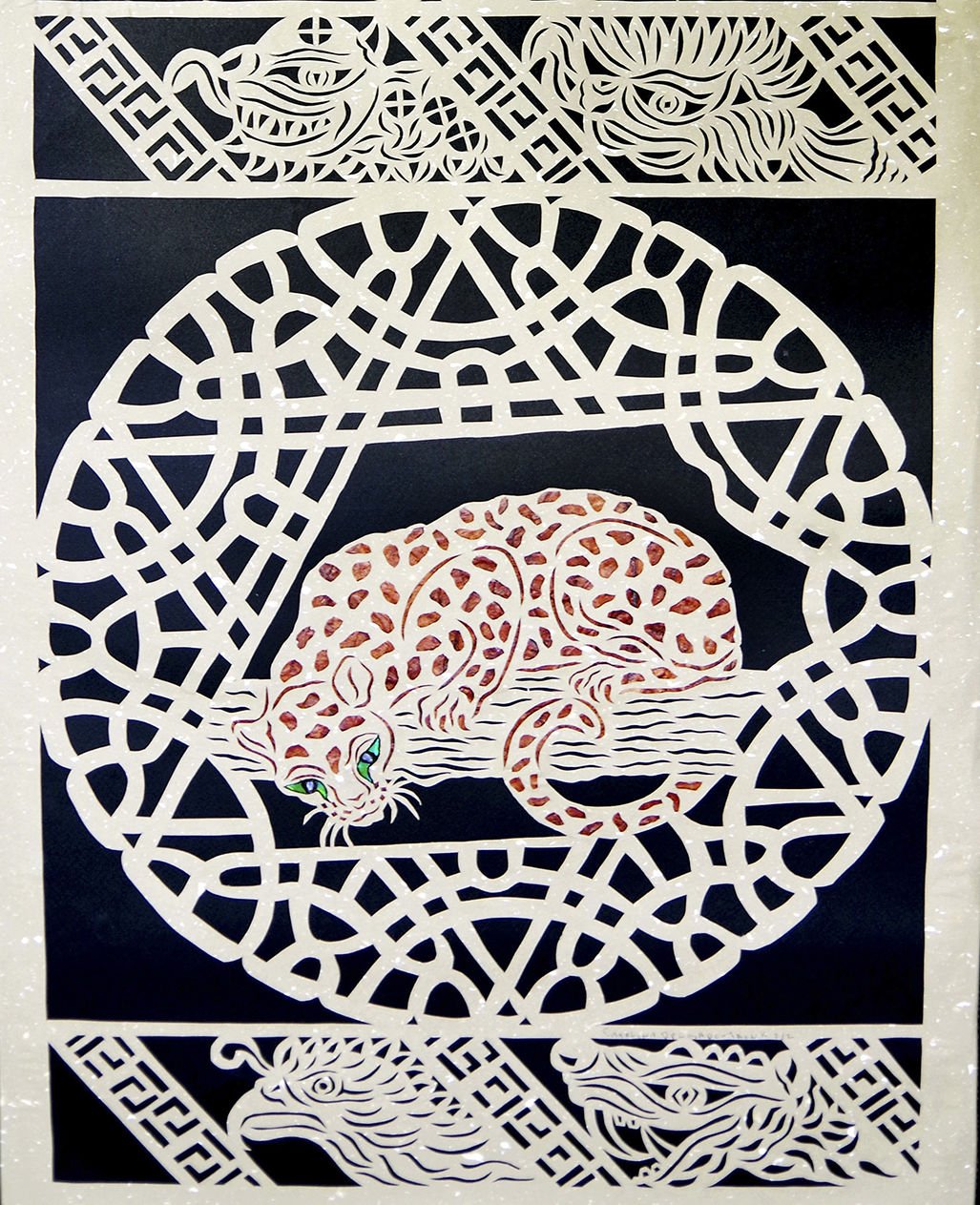 The present range of the jaguar extends from the southwestern United States to as far south as Argentina. But on the U.S. side of the border with Mexico, you’re not likely to encounter many of them, even if you know where to look. According to the nonprofit Center for Biological Diversity, only three jaguars have been spotted in southern Arizona since 2015. Loss of habitat is a major contributor to declining jaguar populations in the United States. Thanks to a concerted effort by the CBD, those jaguars and any others that may live here are protected by the Endangered Species Act. But, with President Trump pushing for a wall along the southern border, they face a new threat.

“It’s not only people that migrate,” says artist Catalina Delgado-Trunk. “Animals simply do not recognize borders.” Delgado-Trunk is among the artists whose work is on view in the group exhibition Species in Peril Along the Rio Grande (Saturday, Sept. 28, through Dec. 28) at 516 Arts in Albuquerque. The show is part of a series of programs that spans venues in three states and Mexico, which runs through the fall. The programs address an ongoing biological crisis: As the United Nations reported in May of this year, biodiversity is declining at unprecedented rates globally, with as many as one million species currently facing extinction.

The jaguar, which has vacillated between near-threatened, threatened, and endangered status, is just one example. “The jaguar happens to be one of my animal spirits,” says Delgado-Trunk, who has two works in the exhibit, including the cut-paper piece Fauna Mesoamericana. “The environment is really important. I am really ashamed about the legacy that we’re going to leave the generations that come behind us.” Along with Delgado-Trunk, the multimedia exhibition features work by Jessica Gross, Cannupa Hanska Luger, Ruben Olguin, and Daisy Quezada. Twenty-three artists participated.

Fauna Mesoamericana, which depicts a spotted jaguar looking down from a tree limb, is an example of papel picado, a cut-paper technique with roots in pre-Hispanic Mexico, when indigenous peoples made figures from tree bark using obsidian knives. Today, tissue paper is a common substitute, and it’s the medium Delgado-Trunk uses in most of her work.

“The edges at the top, in the center, and at the bottom of it have pre-Columbian mythical, or semi-mythical animals,” says the artist, who was struck by the possibility of the jaguar passing into the realm of myth in the near future.

Species in Peril, which 516 Arts organized in partnership with the Art & Ecology program at the University of New Mexico, is certainly ambitious: It includes panel discussions, performances, exhibits, and public forums at venues in New Mexico, Texas, Colorado, and Mexico. Initially, the exhibition was intended as a means of addressing species decline globally, but the co-curators — Josie Lopez, curator of art at the Albuquerque Museum, and Subhankar Banerjee, the Lannan Foundation Endowed Chair and a professor of art and ecology at UNM — felt that a regional focus, with artists who live and work in the Rio Grande region, would have a greater impact.

“One of the key things of Species in Peril Along the Rio Grande is to acknowledge the biological crisis, which, as I see it, is actually a more expansive crisis than the climate crisis, but the public hardly knows about this,” says Banerjee. “I can say this without hesitation, that this is the first time a large region, across two nations, is engaging the biological crisis in such an expansive manner.”

Both Sides of the River: Endangered Species in the Borderlands is a mural project involving U.S. artists Jaque Fragua of Jemez Pueblo (who also has work at 516 Arts), street artist Dose of Albuquerque, and Mexican artists Juan Carlos Reyes and Laura Meneses of Juárez. A mural at the Rubin Center for the Visual Arts at the University of Texas, El Paso, was dedicated on Sept. 26. Another is in progress across the border, at Universidad Autónoma de Ciudad Juárez (UACJ). “Essentially, the murals are representational, figurative works that show the endangered species in plain sight,” says Fragua, who’s leading the project. The murals include portraits of some lesser-known endangered flora and fauna, including the Sneed’s pincushion cactus and aplomado falcon. He describes the murals as a cross between naturalist compositions like the illustrations of ornithologist John James Audubon, and graffiti art. Both Sides of the River is a part of the Center for Biological Diversity’s Endangered Species Mural Project program. The Juárez dedication takes place on Nov. 8.

Other exhibitions include Desierto.Arte.Archivo (Nov. 9 through Jan. 24, 2020, at UACJ’s Centro Cultural de las Fronteras), which explores the aesthetic, political, and biological forces that have shaped the Chihuahuan Desert. Another, A Line in the Sand: Wildlife of the Borderlands (Nov. 9 through May 24 at the Roswell Museum & Art Center), looks at the history and current state of wildlife in the diverse regions that extend along the U.S./Mexico border. A complete list events is available at516arts.org.

“It’s a region-wide, very generous engagement,” says Banerjee. “This came together, kind of miraculously, over a very short period of time.”

A driving force behind the development of the exhibition at 516 Arts was the need to address a dearth of knowledge among New Mexicans about the biological crisis affecting their own state. “When we talk about New Mexico, it’s all these other social crises,” Banerjee says. “They’re all very real and very intense, whether it’s poverty, education. But, at the same time, our biological and cultural diversity is among the very best in North America, so why not honor that? That richness and vitality of life and culture is also a reason we are attempting to raise awareness about what we are facing. It’s not just a sentimental, feel-good story. It’s about the fact that we have this diversity and that’s what we’re fighting to protect and preserve to mitigate the loss.”

What would such devastating loss look like? And, just as importantly, perhaps, what would it feel like? We may already be grappling with a sense of future loss, and there’s actually a name for that feeling: solastalgia.

"Species in Peril Along the Rio Grande": Associated events

516 Arts in Albuquerque and the Art & Ecology program at the University of New Mexico launch an ambitious project this September with Species in Peril Along the Rio Grande. In addition to the exhibition of the same name at 516 Arts, a region-wide series of related events takes place over the fall season in New Mexico, Colorado, Texas, and Mexico. There are talks, panel discussions, exhibitions, performances, and more. The objective is to raise awareness of the growing biological crisis and the threats facing numerous species in the Rio Grande watershed. All the events here are free. For more information, call 516 Arts at 505-242-1445, and for a complete list of events and venues in New Mexico and elsewhere, visit 516arts.org.

Scholar and conservationist Subhankar Banerjee talks about co-curating the exhibition Species in Peril Along the Rio Grande and his research on biological crises in New Mexico, the Pacific Northwest, and the Alaskan Arctic region.

“What it means is, when there’s a place that you live and a place that you love, and you know it’s going to change, one of your main sensations is feeling a sense of loss and longing for the present moment from an anticipated future,” says artist Nina Elder. “It’s kind of like homesickness before leaving home.”

Elder is known for her meticulous drawings of landscapes affected by mining, industrialization, and New Mexico’s nuclear legacy. Her most recent work, some of which is included in Species in Peril, was inspired by the idea of solastalgia. “I was really thinking about how to visualize that sense that some things are staying, some things are going away. Are we going to be haunted by the ghosts of the things that are no longer there? Are they going to feel like these upside-down memories?”

In her drawing Interrupted Ecosystem: Rocky Mountain Piñon, the white silhouette of an upside-down piñon floats, like the remnant of a fading dream, above a hilly landscape. The conifer population in the Rocky Mountains is under threat from the impact of climate-driven drought, heat, wildfires, and infestations by destructive insects like the pine beetle. “Imagine going hiking and only seeing one out of five trees left,” says Elder. “That will happen in my lifetime.”

While such a pronouncement may strike you as alarmist, consider that the Union of Concerned Scientists and the Rocky Mountain Climate Organization released a report in 2014 stating that, by 2060, Rocky Mountain pine species — particularly the lodgepole pine, ponderosa pine, Engelmann spruce, and Douglas fir — will see a projected net decline of a staggering 58 to 90 percent of their current suitable territory.

But it’s not just scientists and conservationists who are sounding a warning, as the creative endeavors that form Species in Peril can attest. Artists, too, have taken up the cause, and are raising awareness.

“People laugh at this,” says Elder, “but recognizing joy and connection and beauty is really kind of radical right now.” ◀

▼ Species in Peril Along the Rio Grande