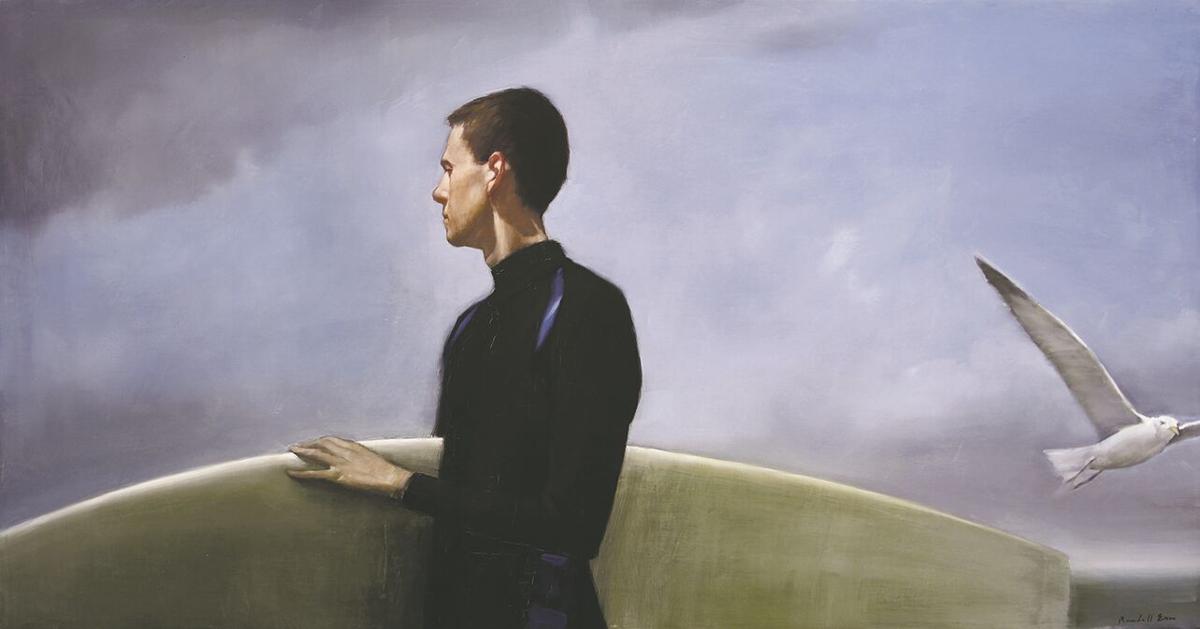 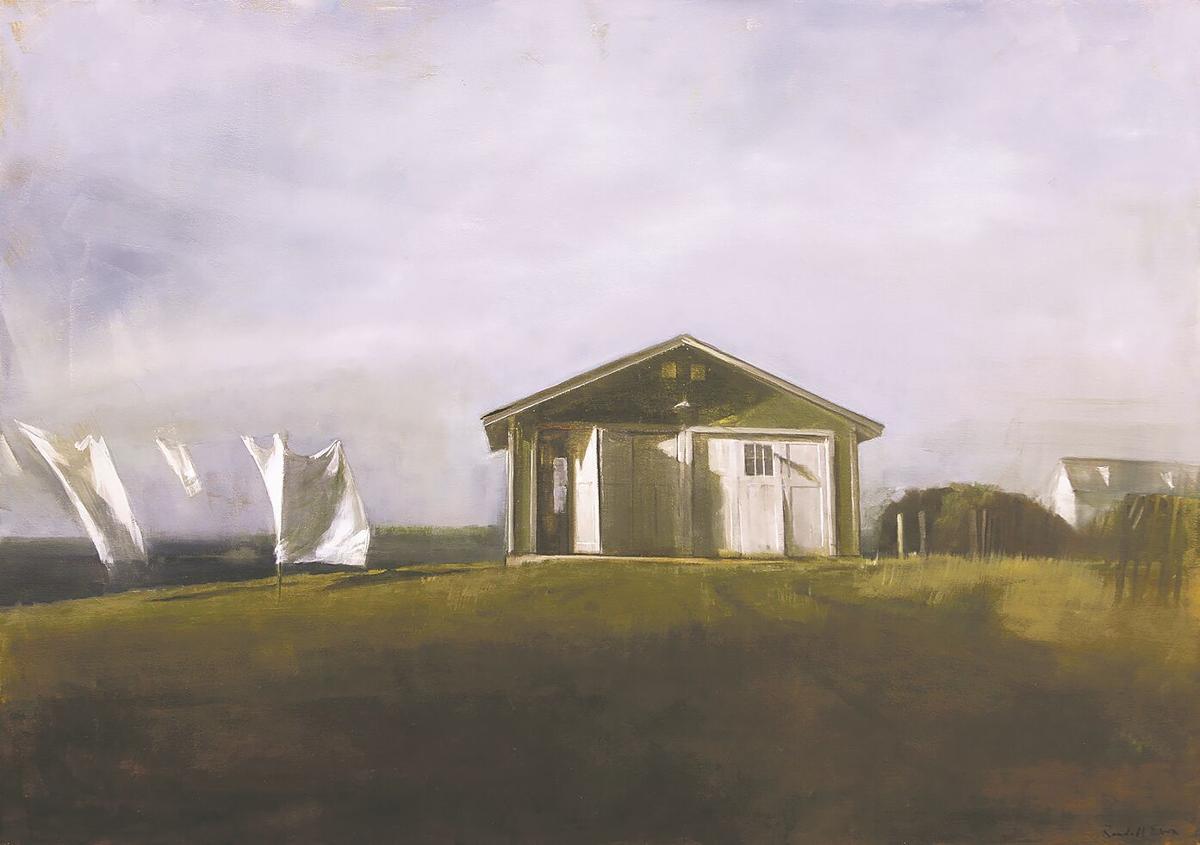 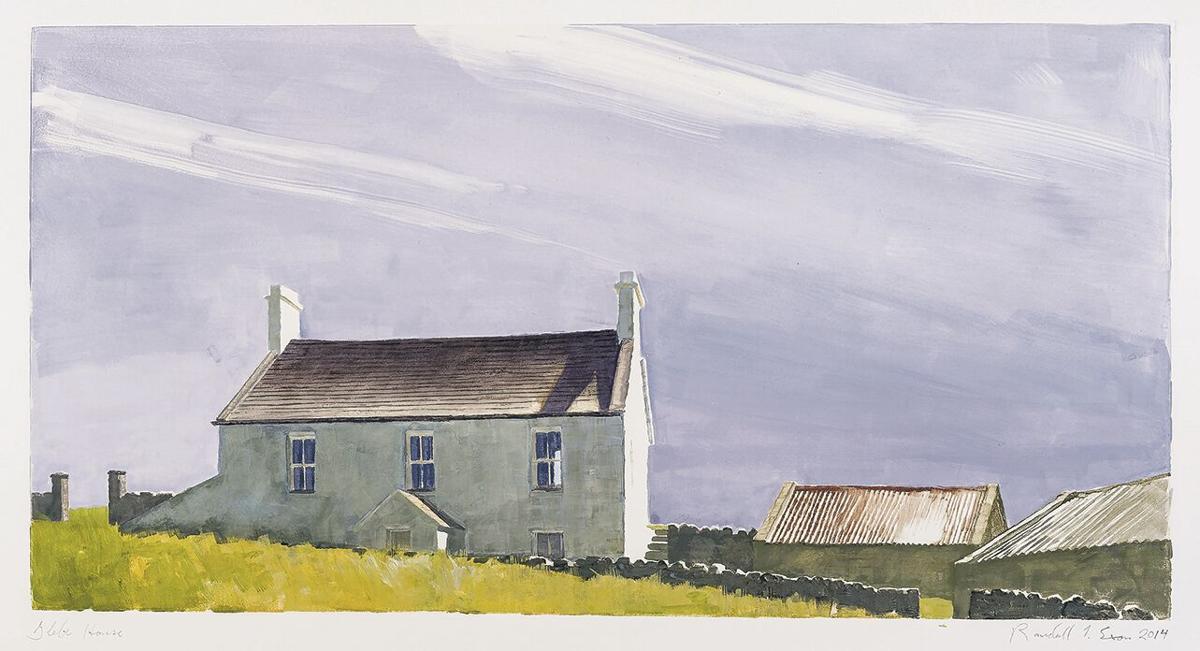 It could be any beachfront, anywhere in the world, where the surfing’s good. Hints of blue emerge from a smoky veil of sky, and a touch of green lends a sense of depth to the ocean, which extends to an indistinct horizon line, marking this day as one rich in atmosphere. You can almost taste the air. In the foreground, a young male surfer in a black wetsuit carries his board. A gull flies past him, close enough that, if the surfer were to turn around, he could grab it.

Painter Randall Exon’s Surfer and Bird (2007) bears no indication of a specific location. Exon, a landscape and figurative painter in the realist tradition, is all about awakening the senses and emotions and not about capturing a recognizable place — save, perhaps, for the memories of place evoked by his imagery. His paintings are, in essence, imagined landscapes. But they’re drawn from fragments of real life. The surfer in the painting, for instance, is the son of the artist’s friend. (Perhaps, not surprisingly, the subject isn’t actually a surfer.)

In this work, Exon’s interest, as in all of his work, was on the design elements: the contrast between white surfboard against the man’s black wetsuit and the painting’s directional polarities. The young man looks out to his right, for instance, and the seagull flies in the opposite direction, its left wing moving out of the picture frame. Such contrasts draw the eye first one way, then the other, making this close-up portrait of a surfer feel expansive.

“I think that’s a little homage to Winslow Homer,” Exon says of the painting. “I’m really pretty rooted in American painting of the 19th century. I’m drawn to Homer’s larger seascapes. Those are clearly studio paintings. I think his experience of working outside, painting the water, using what he learned about the ocean and basically taking that back to the studio is pretty remarkable. He’s basically making that stuff up.”

Exon’s work is included in LewAllen Galleries’ current group exhibition, American Scenes: Timothy Barr, Randall Exon & T. Allen Lawson, a show of works by contemporary artists that belong to the American tradition of landscape painting but who dispense with the formal practice of strict observation. Exon, for instance, describes his landscapes as constructed.

“I’ll usually come up with some kind of setting based on a place that I know,” says the 65-year-old painter. “But it’s really not anything specific. I found, earlier in my work, that I’m really not a plein air painter. I do enjoy going out and painting, but my interest is more in a landscape that has an imaginary or dreamlike quality. The artists that I’ve really been influenced by seem to have the freedom to come up with paintings and compositions that were also more constructed.”

In addition to Homer, Exon’s influences include Edward Hopper and George Inness, the latter impressing him with the manner in which he painted light.

“Rather than trying to capture a specific kind of light on a particular day, it’s a more memory-based notion of light. I think of it as more temporal and sort of timeless in a way. It’s really the poetics of light that I’m reaching for.”

Architecture is also a feature of many of his paintings, such as the white clapboard that dominates Beach House Window (2006) or his monotypes of Glebe House in Ireland, made in 2014, which have the distinction of depicting an actual, existing structure rather than being the result of artistic license.

Ferrand goes to Ireland every year.

“About 25 years ago, I got a fellowship to the Ballinglen Arts

Foundation. It’s in a very remote part of the Republic of Ireland

on the northwest side, as far north and west as you can get. It’s this little town with a very agrarian culture.”

The landscape in that corner of Ireland, he says, is ancient, in human terms.

“They’ve discovered farms under the peat that are 5,000 years old. It’s an absolutely beautiful landscape, but there isn’t really a square inch of it that hasn’t been touched. It’s a worked landscape, and you feel the history of the people who live there. In terms of the impulse that I have to focus on memory and time, it was the perfect place for me at that point in my career.”

Exon, who lives just outside of Philadelphia, was born in South Dakota and raised in the Midwest. His grandparents had farms in the region, and being in an agrarian section of Ireland awoke in him memories of his upbringing and the landscapes of his youth.

“It had something in common with that part of the world that I grew up in,” he says. “It started to mix with my memory and experience, this landscape that I felt, somehow, that I knew and had experienced already.”

Memory, as a defining feature of Exon’s work, comes from the role it played in his family history. He recalls family gatherings where parents and grandparents reminisced “about the arc of life over three or four generations,” relating stories of the war years, the Great Depression, or just the bad years for crops. Despite the trials they related, he remembers the unwavering love between them. It gets translated into his paintings as a sort of reverence for subject matter.

“They’re full of sentiment but not sentimental,” he says of his work. “I learned to distinguish between what was sentimental and what was maudlin.”

Exon graduated with a BFA in painting from Washburn University in Kansas in 1978, and then obtained his master’s from the University of Iowa in 1982. That same year, he moved to Pennsylvania and began teaching at Swarthmore College, where he’s lived ever since.

In his student years, he was captivated by the work of Venetian painters of the High Renaissance, like Giorgione and Titian. And whether it was the Venetians or American painters of the 19th century, what drew him was the quality of light in their works, as well as their depictions of invented landscapes.

Part and parcel of his interest in constructed landscapes is the design element. That doesn’t mean that all of his paintings are planned down to the smallest detail. The way he works allows for a certain amount of instinct to take over.

“I’m trying to push the compositional ideas as opposed to doing just a straightforward portrait of a place,” he says. “But it’s always a trial and error kind of thing. The more I change things in the composition, something starts to happen that’s not entirely in my control. I start to recognize something in the light, in the arrangement of things, or the way light falls on objects that appeals to me. I start to run with that.”

Exon lives close to Andrew Wyeth country, but unlike Wyeth, who was known for the landscapes based on his hometown of Chadds Ford Township, Exon doesn’t consider himself a regionalist.

“I think it’s the nature of my life. When I moved away from those family farms, my art became more about how memories shape what I’m experiencing now.”

In graduate school, he delved into the fictional works of Southern writers like Eudora Welty, William Faulkner, and Flannery O’Connor. He was mesmerized by their ability to cull from the world of memory and bring it to life.

“The fictional is something I’ve bought into,” he says. “My paintings are more of a fiction.” ◀