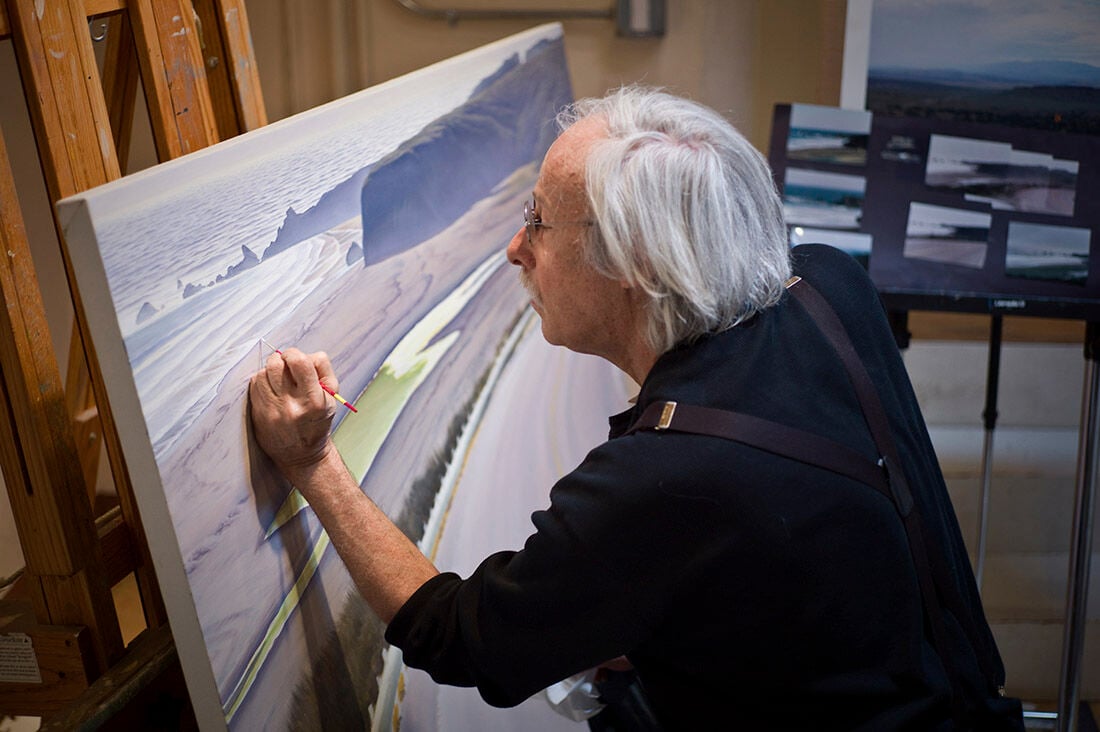 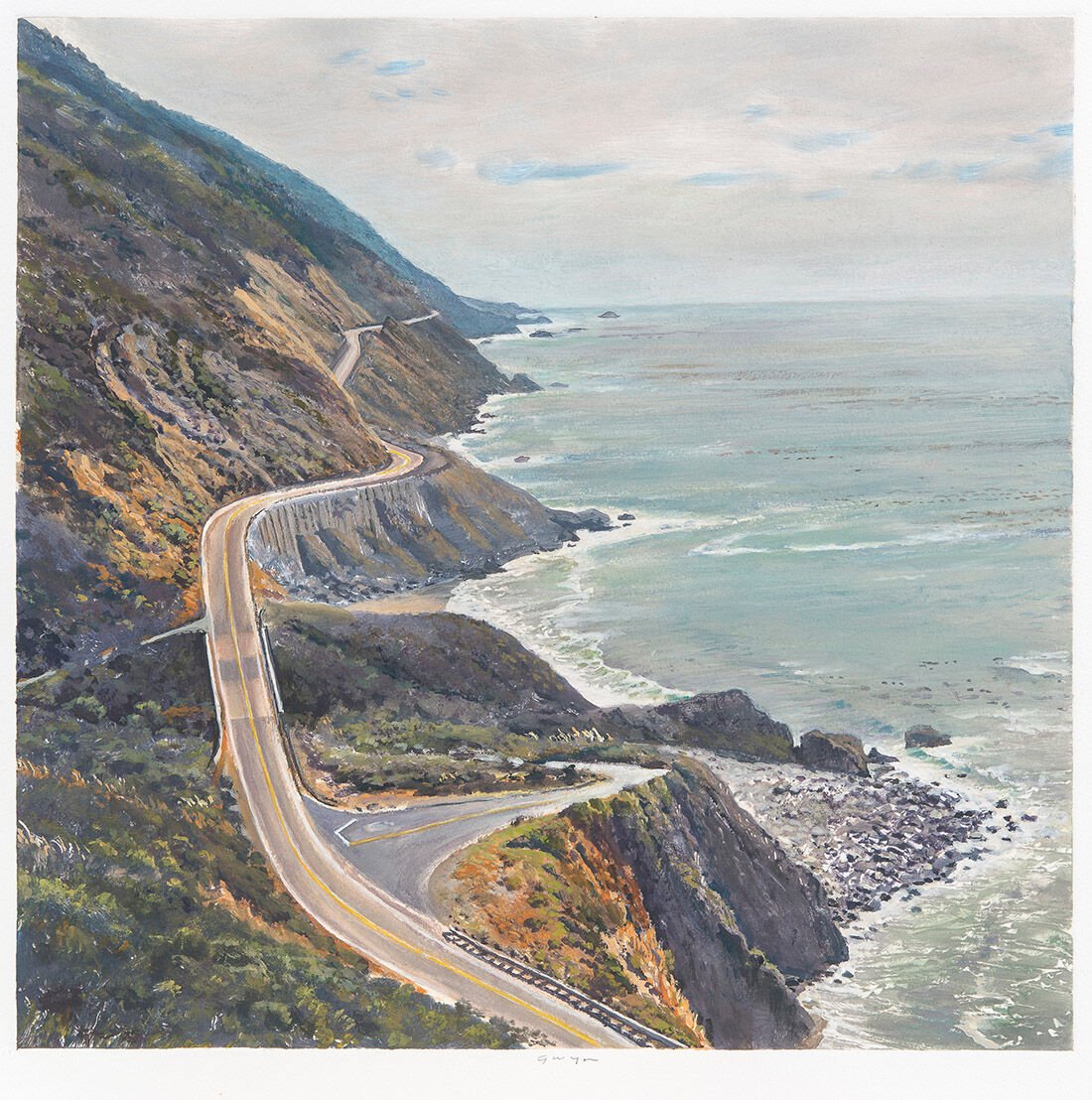 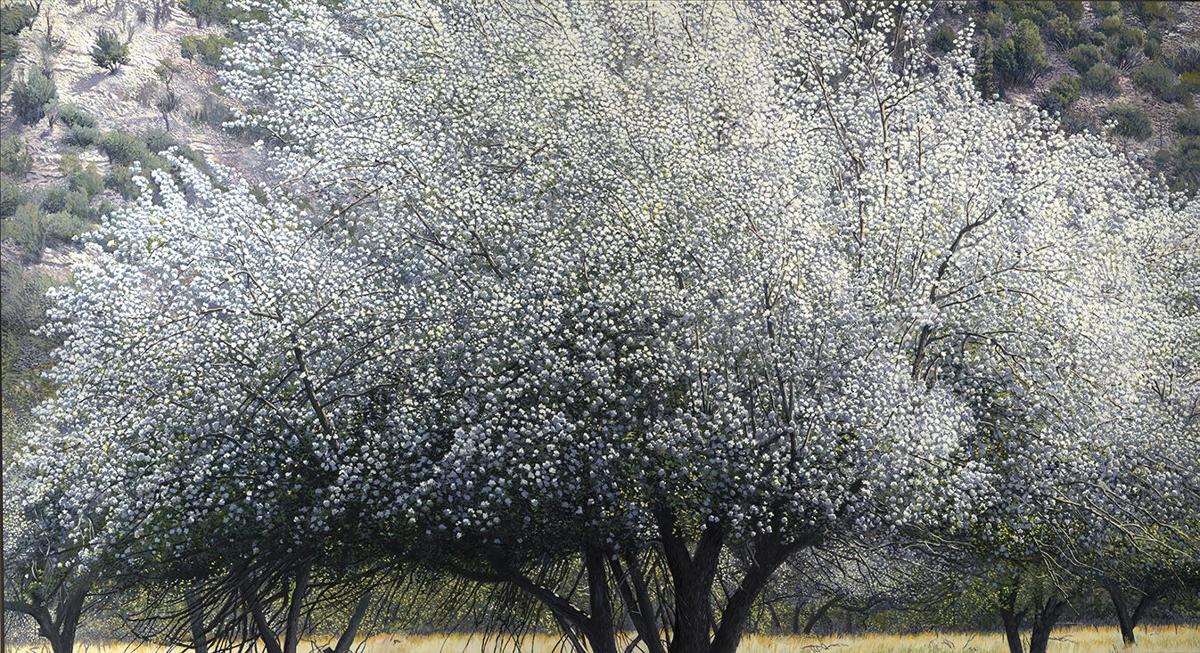 It might sound antithetical, but consider the possibility that to paint a subject with fidelity, you have to be able to look at it abstractly.

Take artist Woody Gwyn’s 48-by-74-inch The Earth, the Air, the Water (oil on canvas, 2020), for instance. Up close, the rocky terrain depicted is a series of splotches of color, each rock differentiated from the next by a mere shift in color or a dark line here and there. The light, glinting off of the sea beyond the rocky hillsides, merely specks of white paint. But at a distance of, say, 10 feet, the whole scene coalesces into a landscape and seascape that conveys remarkable detail. Step back a little further and it looks almost like a photograph.

Gwyn has a way of capturing a sense of precision or exactitude without the need to render a multitude of infinitesimal landscape features, although his paintings certainly give that impression. And he does paint with fidelity, putting you in the scene.

“Look at [ Johannes] Vermeer,” says the 76-year-old painter. “You can turn a Vermeer upside down and it’s still exciting looking, just the way he broke up the spaces in an abstract sort of way. That’s what makes him better than, say, [Pieter] de Hooch, who painted just as well as Vermeer but didn’t have that abstract flash. It’s very crucial that a thing work on the abstract level, whether it’s representational or not.”

Gwyn’s current exhibition of paintings and monotypes at LewAllen Galleries (1613 Paseo de Peralta, 505-988-3250, lewallengalleries.com), The Earth, The Air, The Water (through Jan. 23), focuses on the three major components of his work referenced in the title. Most of them were painted in the last year, but the show also includes a few examples of work from previous decades.

Gwyn, who has lived in New Mexico since the mid-1970s, is among the nation’s foremost contemporary landscape painters. Part of what makes his work atypical is his unusual compositions: equal weight given to foreground and background imagery, panoramas, and playful contrasts between natural settings and human-made constructs. Gwyn has a way of emphasizing the aesthetic qualities of finite aspects of the landscape. But he often combines this drilled-down view with a broader one: a glimpse of the vast ocean through a mountain pass or a sagebrush-studded hillside rising beyond a blossoming fruit tree, combining the micro and the macro.

Gwyn was born in San Antonio and raised in the west Texas town of Midland. He knew he wanted to be an artist from the time he was at least 12 years old. It helped that Midland, while not known as an artists’ haven, did have an active art scene. A local artist group, he says, managed to get some prominent artists to come to give workshops and lectures, including Richard Diebenkorn and Milton Resnick. “It was an unusual thing to be in a dusty west Texas town and still have these things happening,” Gwyn says. “J. Frank Dobie said about west Texas that it never, as a place, promised so little and gave so much.”

In grade school, Gwyn was known as the class artist, and his parents encouraged his artistic pursuits. At least they didn’t try to stop him, he says. “By the time I was 11 or 12 years old, I was painting every day, really.”

College presented him with a quandary. Lacking the skills and confidence to handle college-level math courses prevented him from pursuing a university degree in the early 1960s. He sought out inspiration and instruction, instead, from the artists he admired, like Roswell-born landscape painter and portraitist Peter Hurd.

“When I was 18, I phoned him up, and I think he must have thought I was some rich oilman from Midland. ‘Oh, yes, Mr. Gwyn, come out tomorrow.’ When I got there, he and his wife, Henriette, couldn’t have been nicer. A big snowstorm came, and they were stuck with me all day. I remember we walked outside, and the snow was on the ground. I was behind him, and I put my foot in his footprint and thought, I want to be an artist like this man. He gave me some very radical advice for 1963. He said, ‘Look, the only time I’ve wasted was the two years I was at Haverford College. If you really want to be an artist, go to art school. Go to the Pennsylvania Academy, where I went.’ That was in February, and in May I was driving to Philadelphia. So, I took his advice.”

Gwyn remembers aspects of his artistic edification that, today, strike him as fortuitous. Like when he purchased a Mark II Lincoln Continental from a Texas oilman and drove it out to Pennsylvania. There, he fell in with realist painter Andrew Wyeth, who just so happened to have a Mark II Continental of his own. “I took art lessons from his sister Carolyn, so if you see any Wyeth influence in my work, I hope I came by it honestly enough.”

The views presented in his landscapes mirror the ways he encounters them, driving along winding mountain roads in New Mexico, or gazing out past guardrails along the California coast. He’s equally adept at rendering Southwestern mesas, serene and wooded terrain, and shimmering waterways. He works in the field, using a combination of plein air sketches and photographs taken by photographer friends who accompany him on his excursions. These tools inform his work on larger canvases made back in the studio.

He won’t forsake a guardrail or the tarmac by painting them out of the scene. Instead, he includes them, because they’re part of the experience of being in a place. “A number of things in the show are just of pure nature,” he says. “But I do sometimes include the highway. It’s not just because it’s there, but I actually think it has its own beauty. There’s a potential for beauty in places where we don’t necessarily expect it. There’s a very special place to me near Villanueva [New Mexico] that really looks like the South of France. I know that van Gogh would have loved it: the fields and the rocky crags and everything. The potential is everywhere. It’s just a matter of seeing it.”

“He trains your eye to go to a place it wouldn’t go to on its own,” says LewAllen’s marketing and communications manager, Alex Gill. “That’s part of the magic of his work. There’s a sense of transformation. One substance almost shifts into the other.”

A case in point is a monotype titled Ocean I (2020). It depicts a seascape in which the light of the sun is refracted on the surface of the rippling waves. A faint horizon line can be detected in the upper portion of the canvas, but the division between water and sky is not clearly delineated. They appear almost as though they’re morphing together. “Each element affects the other element,” Gill says.

But as a painter, Gwyn isn’t merely seeking to capture a sense of the majesty of the landscape, even if from a unique perspective. He’s exploring composition as a means of capturing the viewer’s attention. He often employs playfulness, such as when he paints a road bisecting a composition so that the yellow line echoes the horizon line of the sea in the background. For instance, in a painting included in the exhibit, Arrows (1984), directional arrows along the highway suggest movement, leading the eye from the right side of the canvas to the left, but that movement contrasts with the relative stillness of an ocean that lies just beyond the road. A guardrail separates the water from the pavement. A glowing horizon line separates the sky from the water. The entire canvas is a series of horizontal bands comprising these disparate elements which, together, convey a sense of abstraction. “There’s this dialogue between the elements,” Gill says. “It’s very distinctive, the way he’s reducing elements down while still being attentive to details.”

Gwyn’s mastery at depicting exterior settings comes from years of faithfulness to landscape painting. It’s been his main interest for most of his artistic life.

Landscape painting is the genre for which he’s best known, but he has done figurative work as well. “I guess it’s been 10 or 12 years ago, or more than that, but I did a show of figurative pieces at Gerald Peters Gallery. I liked the work myself, but I remember one woman coming up to me and saying, ‘I came all the way from California to see a Woody Gwyn show, and this is not a Woody Gwyn show.’ That’s just the way it goes.”

Gwyn says he’s been fortunate to make a living as a landscape painter. He’s really never been anything else. His commitment is total. “Being an artist is not a job,” he says. “It’s not even a profession. It has got to be a passion. If it’s not, then you should just do something else. You know, Goethe said, ‘Once you decide to commit totally to a thing, nature rearranges itself for you.’ ” ◀

Woody Gwyn: The Earth, The Air, The Water

His Highway scenes are thrilling !