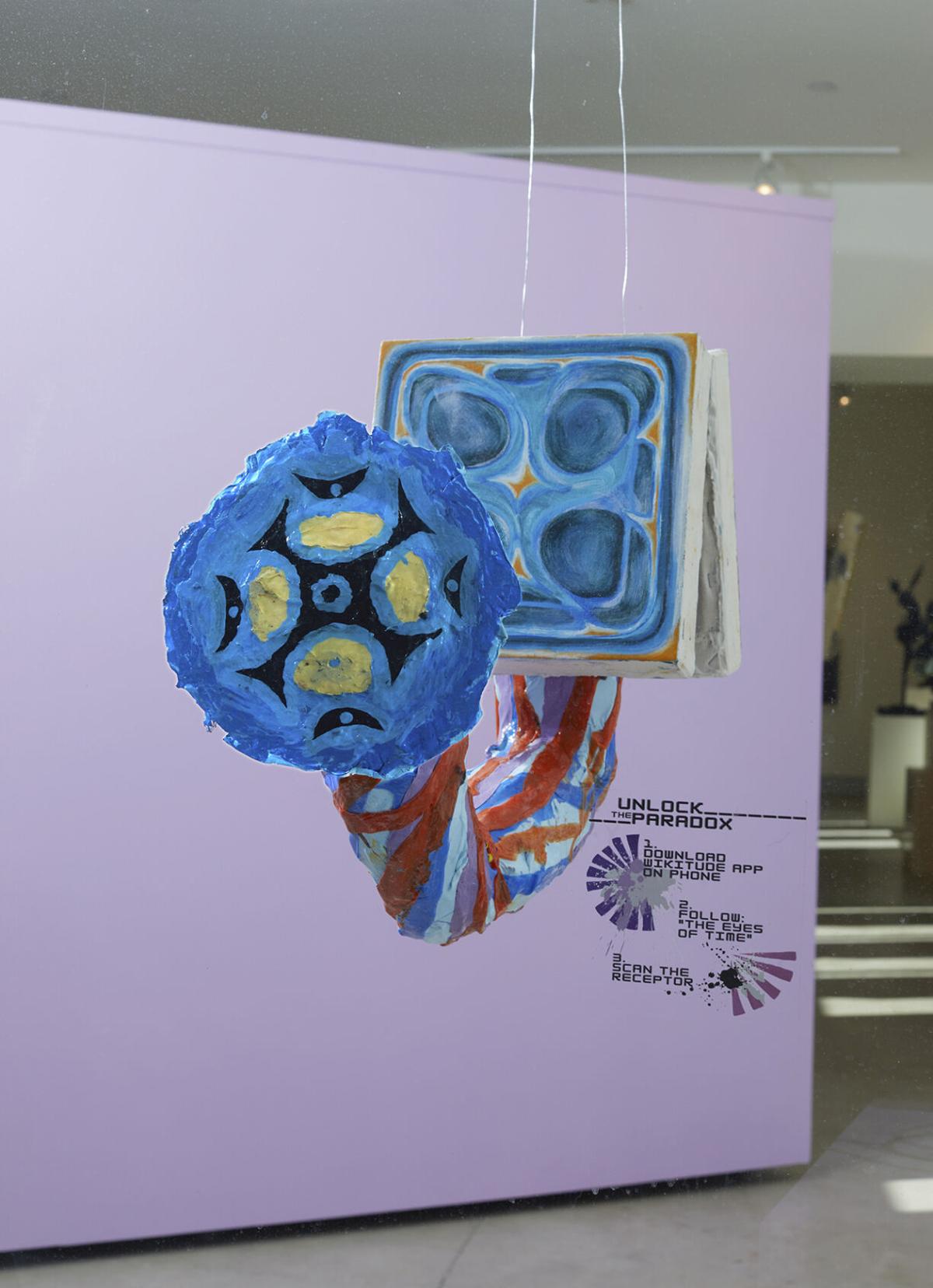 The Eyes of Time, Unlock the Paradox (2020), multimedia installation 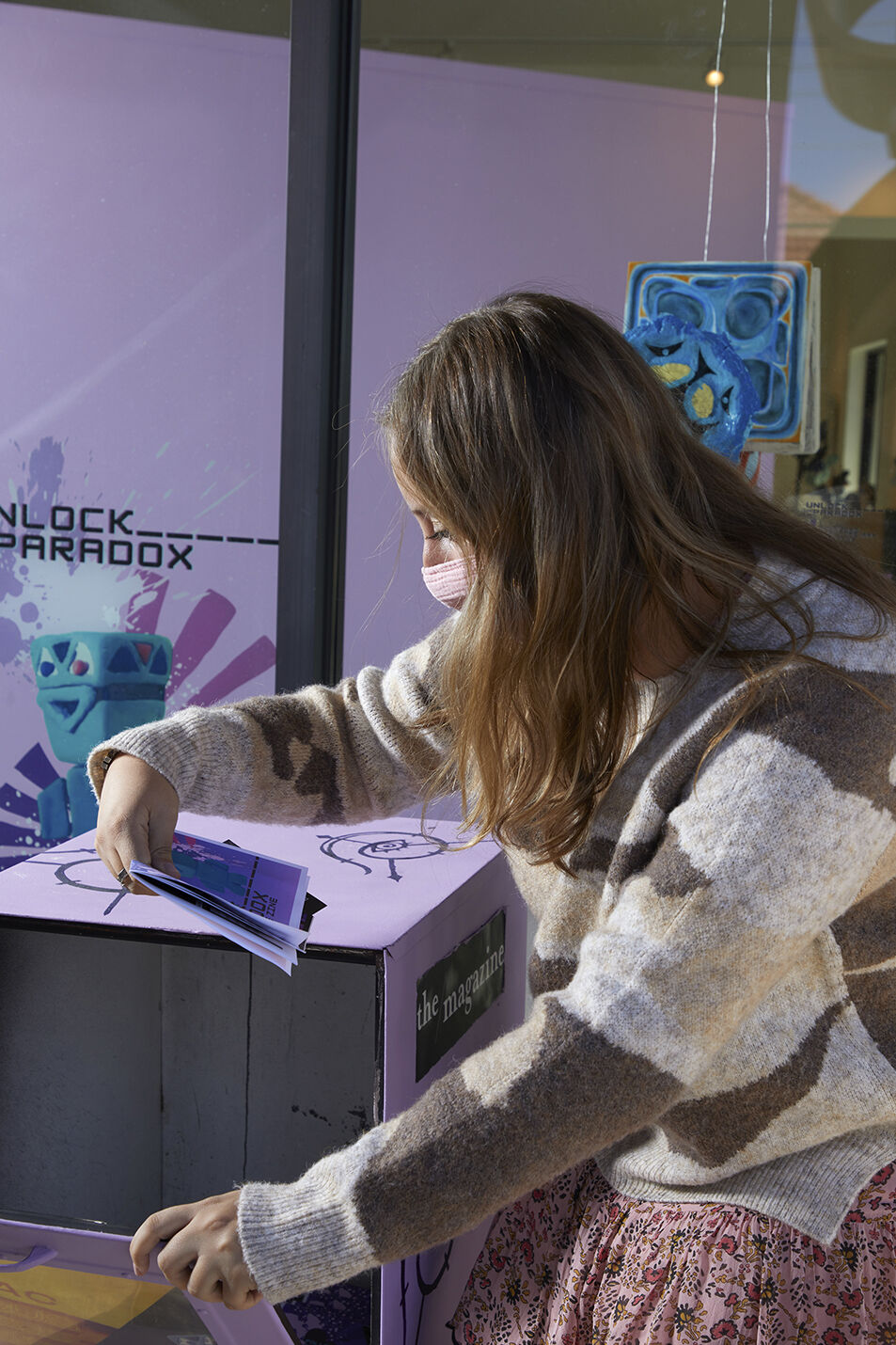 A participant engages with Unlock the Paradox

The Eyes of Time, Unlock the Paradox (2020), multimedia installation

A participant engages with Unlock the Paradox

Take a walk past Form & Concept and you may notice something odd inside: wormlike tendrils have snaked through the gallery and attached themselves like lampreys to the plate glass windows. Are they reaching out to you? Or are they trying to escape? Rio Arriba County-based art collective The Eyes of Time calls these organic forms Paradox Incubators, and they play a role in the group’s immersive installation Unlock the Paradox. You might not know to look at them, but you can interact with them. And you don’t need to go inside the gallery to do so.

“What we aim to do is create the experience of a novel but do so using the real world and gaming mechanisms,” says Devon Hoffman, director of The Eyes of Time, a community-cased company composed of more than four dozen individual collaborators. “It’s a little closer to an escape room but set in the real world. New Mexico is a really key component.”

To embark on this little adventure, head to the Wikitude app (wikitude.com) and search for “The Eyes of Time.” Players, as Eyes calls viewers, will ultimately leave Form & Concept (435 S. Guadalupe St., 505-780-8312, formandconcept.center), eventually arriving at the Jean Cocteau Cinema (418 Montezuma Ave., 505-466-5528, jeancocteaucinema.com), where you can interact with a second installation called MANIAC Virus.

Be sure to wear your walking shoes.

Unlock the Paradox and MANIAC Virus are mini-chapters in a narrative with multiple story threads that are still in development. They’re teasers designed to introduce you to the company and the types of immersive, interactive experiences they offer. Unlock the Paradox is about a time-traveling character from the recent past that you, as a player, are helping to resolve a future crisis. MANIAC Virus, on the other hand, is about a deadly disease affecting interdimensional beings who are responsible for maintaining the cosmic order. And you are helping to heal them.

“All of our stories are set within a shared universe,” Hoffman says. “Basically, it’s a space in which a lot of stories can be told, and they’re affected by similar events but not necessarily linearly linked. You’re not just following one protagonist through one arc, and then that’s it. What makes our shared universe unique is that we link it pretty intimately with the real world. We try to create an alternate reality that is consequential with — and to — our lived reality.”

In order to get the full experience, users are required to engage with their immediate surroundings. Hoffman and other representatives of The Eyes of Time are available at the gallery from 10 a.m. to 1 p.m. every Saturday to help you along.

After downloading the app and accessing the videos that introduce you to the story, grab a zine from the painted newspaper box outside the gallery. You may notice that it has a diamond-shaped cutout across the fold and that each page is a photograph of an outdoor setting. Acute observers will see that the first photo is a scene taken right outside the gallery. Hold up the zine and match what’s in the photo with your surrounding environment so that what you see in the diamond completes the photo. When you’re in the correct position, search your immediate environment for an object that doesn’t belong. The Eyes of Time calls these objects “relics.” (Hint: They look like metal clamps and will be attached to something nearby, like a bike rack maybe, or the pole of a street sign.)

Each relic is painted with a design that triggers another video when scanned (similar to how a QR code works) and gives you more of the story. You can do this multiple times as you make your way from Form & Concept to the Jean Cocteau. There are several images in the zine that were taken along that route, where more relics are hidden in plain view for you to discover (but not remove).

Interacting with objects in your immediate environment is the only way to open the media components of the app. It’s an engaging way to tell a story, and it makes you and your surroundings a part of it. You have choices to make that affect the direction the story takes. The narratives combine aspects of New Mexico history with the science fiction fantasies created by The Eyes of Time.

“One of the refrains of science fiction is that it’s a way to reflect on our society,” Hoffman says. “But there has been a tendency in science fiction, I think, to divorce the narrative from real-world consequences. What we are trying to do is say, ‘No, no, no, they are one and the same.’ In so doing, the narrative becomes more like a myth, one in which you’re looking at the world through a lens of story, and the story is helping facilitate your understanding of the world.”

The installations at the gallery and the cinema take, as their conceit, the idea that time and history are navigable and act upon each other behind the scenes. They are designed to generate interest in the group’s upcoming project, Future Fates, which is scheduled for release early in 2021. In this installment, the narrative grows richer and more complex. It’s the fifth full chapter in the story, excluding the current projects in the Railyard.

Presale tickets ($52) for Future Fates are on sale now on The Eyes of Time website (theeyesoftime.com). The project is still developing and the presale tickets are, essentially, a crowdfunding initiative to get it completed. Once you’ve signed up for it, you’ll be offered an as-yet-undetermined number of day trips to places in New Mexico that are within an hour’s drive or so from Santa Fe and which offer more extensive adventures in the universe they’re building.

But their present installations are low-key. You could follow the route from Form & Concept to the Jean Cocteau dozens of times, completely unaware that you’re in the midst of an immersive project.

“We don’t need tons of stuff,” Hoffman says. “We just need enough stuff to make it satisfying. We are very much a start-up. The chapters that exist in Santa Fe are prototype demonstrations of how we tell stories. We wanted to have two stories on display and show how they coexist in the same universe while being very distinct on their own. But what we’re really trying to do is create a space where you can belong. And that’s the space of your own curiosity, your own imagination.” ◀

Unlock the Paradox and MANIAC Virus