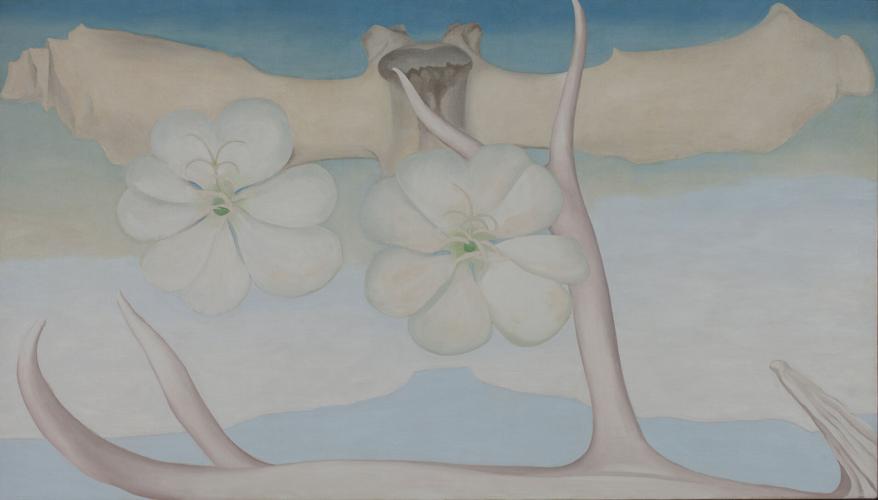 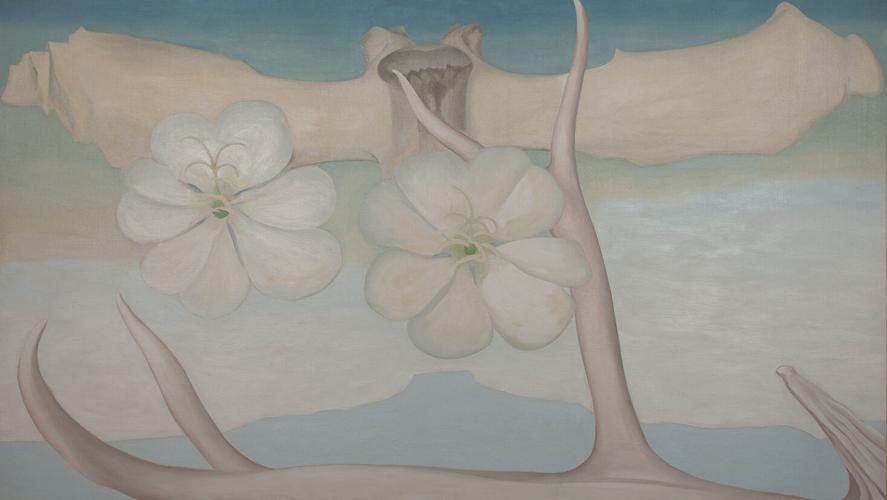 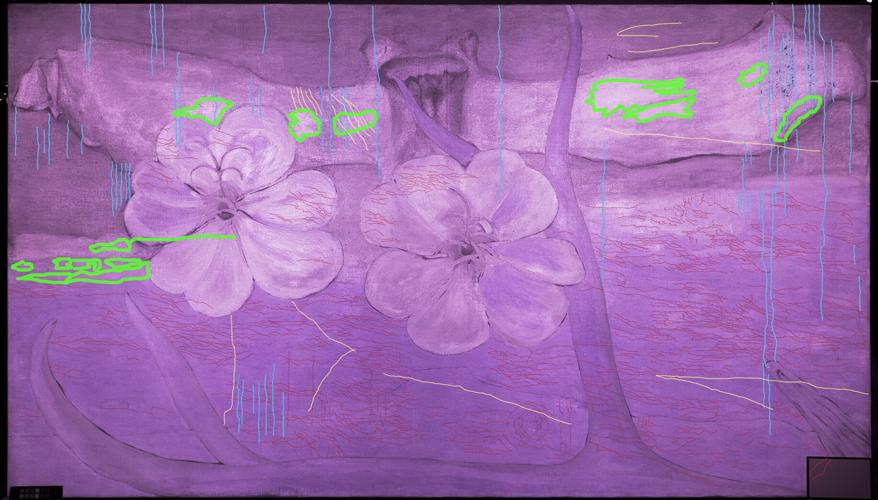 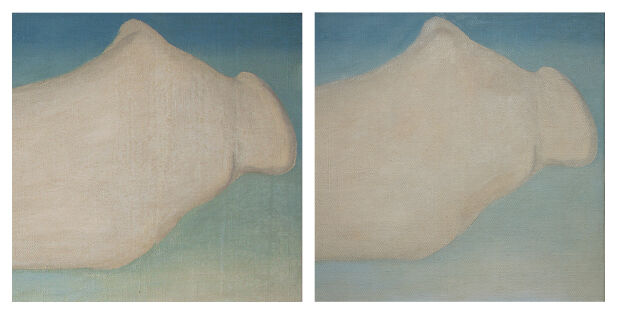 Detail of right section of Georgia O’Keeffe’s Spring showing drip lines before conservation (left) and after cleaning and inpainting (right); courtesy of the Georgia O’Keeffe Museum 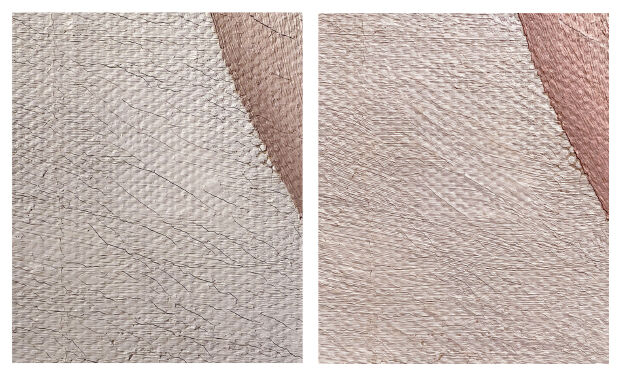 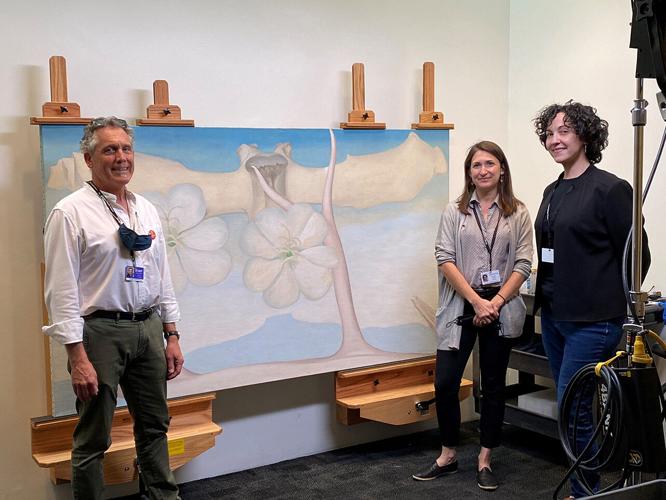 The water damage, which eventually revealed itself in drip lines and cracks, occurred while it was still under the ownership of O’Keeffe, who kept the painting from 1948 until 1963. Being an atypical painting by the artist, it was a difficult sell, as her letters cited below indicate. But O’Keeffe eventually sold it to a Northern New Mexico rancher and his wife in 1963, with an agreement that they would loan it out to exhibits at her request.

In 1980, the painting was sold at auction at Sotheby’s and changed hands three or four times over the next three years. More damage occurred, and crude attempts were made to repair it.

Below is an overview of the damage, what was done to correct it, and what the conservation team’s sleuthing revealed.

But first, some thoughts on the composition itself.

Georgia O’Keeffe took four subjects — deer antlers, the Pedernal mountain, a vertebra, and desert primroses, all of which she’s painted before but never all four together — and placed them in a spatial relationship. Although the painting is representational, with elements of still life and landscape, it’s an unrealistic, even surreal composition. Primroses and the vertebra, for instance, float against the sky.

“O’Keeffe places things, orders things, colors things, crops, and decides on relative sizes, almost to keep the viewer from creating an easy narrative,” Kronkright says. “She takes these four subjects and places them in brand new relationships. The deer antlers she’s painted before, sort of floating in the air, as a vertical. In this case, she’s placed the antlers in the very bottom foreground and made them extremely large. The antlers are firmly planted on the ground. One might suggest that they stand for O’Keeffe herself, planting herself in New Mexico. She’s floated the vertebra as almost this overarching presence, high in the sky, so there are several horizon lines.”

It would be the first and last time that O’Keeffe would bring all of those elements together in a single composition.

The first treatment, water damage, and the second treatment

The first documented treatment of Spring was in 1950. O’Keeffe sent the painting to her conservator, Caroline Keck, in preparation for an exhibit at An American Place, the New York gallery founded by Alfred Stieglitz. “We have the treatment record, and it’s a really minor treatment,” Kronkright says. “She’s really just stretching out the canvas that inevitably occurs with a really big linen canvas and cleaning the painting.”

The water damage likely occurred in the late 1950s at O’Keeffe’s Abiquiú home. Water from a leaking roof got the back of the canvas wet and the front of the canvas dirty and resulted in the swelling of the linen itself, which caused some cracking. O’Keeffe made a concerted effort to have it repaired, again by Keck, in 1960. These are documented treatments by a professional conservator.

But, over a period of decades, drip lines began to appear.

“In the upper right-hand corner, you can see the drip lines and staining from the water damage,” Kronkright says. “Areas that appear light show the inpainting done by Keck in the early 1960s. Over time, the areas that were not inpainted are starting to appear darker, while the restoration paints are starting to appear lighter. The reason is that some of the artist’s original pigments, when mixed with oils, become perceptibly darker over time because they’re losing opacity and becoming more translucent. It’s a natural process of some white pigments in oil.”

“We found that the entire upper half of the painting had been overpainted with that white scumble paint in 1981, not by O’Keeffe and not with O’Keeffe’s permission. This is an undocumented treatment where somebody’s trying to cover over the drip lines.” — Dale Kronkright, Georgia O'Keeffe Museum head of conservation

Part of the investigation into the treatments applied to the painting over the years involved deconstructing the conservation work the museum was aware of, because it was a matter of record, and those conservation efforts that had not been documented.

After the O’Keeffe Museum acquired the painting in 1997, conservators noted a top coat of creamy, opaque white. “O’Keeffe paints very intentionally, one layer of paint thick,” Kronkright says. “Everywhere we saw this blotchy whiteness, we saw two, sometimes three, thicknesses of the paint. It’s very thinly applied over this whole lower left area of the vertebra.”

He describes it as a scumble paint, which is a thin layer of paint applied with a dry brush and a loose hand, which was not typical technique of O’Keeffe. “Since 1997, we’ve been trying to figure out why O’Keeffe would do this? Why would she scumble over it with a very opaque white and in this uncontrolled way?”

It turns out that she didn’t.

“We found that the entire upper half of the painting had been overpainted with that white scumble paint in 1981, not by O’Keeffe and not with O’Keeffe’s permission. This is an undocumented treatment where somebody’s trying to cover over the drip lines.”

Examining the painting under ultraviolet light revealed the extent of the overpainting. Removing the scumble paint, however, revealed damage to the painting itself.

“We think that somebody stuck another painting face to face with it and that painting was still wet and sticky,” Kronkright says. “When someone pulled them apart, it pulled the paint off. When we took off the scumble paint, we could see these areas of paint loss, right down to the canvas.”

“We determined from the condition documentation at each of those exhibitions over a 10-year period that the condition remained pretty much the same.”

“What we infer from the physical evidence is that by 1980 the drip lines are starting to show,” Kronkright says. “The restoration paints applied in the 1960s have stayed nice and white, but the original paints are starting to darken. So there’s this contrast occurring wherever there are drip lines. Plus, there’s this damage. We think that at some point during this period between 1980 and 1983 some commercial gallery was using white acrylic paint to inpaint the areas of paint loss.”

Before attempting to fix the open cracks in the paint that had naturally developed over time, the conservation team first had to determine exactly where they were. They used a camera that’s sensitive to infrared light, which is otherwise invisible to the naked eye. The infrared light comes through the cracks faster and easier than it does through the paint and allowed Kronkright to see which open cracks were in need of repair. “There were over 3,000 cracks in the lower half of the painting” he says. “I put an adhesive into the open cracks in a process called consolidation and set them back down.”

Spring in the artist’s own words

The month after arriving in New Mexico in May of 1948, O’Keeffe wrote to gallerist Edith Halpert, saying: “I have a very large painting – 4 feet high – seven wide. I like it but I admit that it may seem odd to anyone but me.” (Smithsonian Institution Archives of American Art 555025 802-1005 78).

The statement indicates that Spring was her first large-scale work completed in New Mexico.

In response to Halpert’s request for an exhibition of new work in 1950, which would be Spring’s first public display, O’Keeffe wrote: “My best painting is so unmanageable – 4 x 7 – so clean and hard to take care of.” (Smithsonian Institution Archives of American Art 555025 802-1005.)

In a letter to New York art critic Henry McBride, dated July 19, 1948, O’Keeffe writes: “This summer I have one big painting – four feet high – seven wide. [It] looks very well to me where it is and so I think it will stay here. It is too large to take to town. No one would buy it.” (Henry McBride Papers. Yale Collection of American Literature, Beinecke Rare Book and Manuscript Library.)