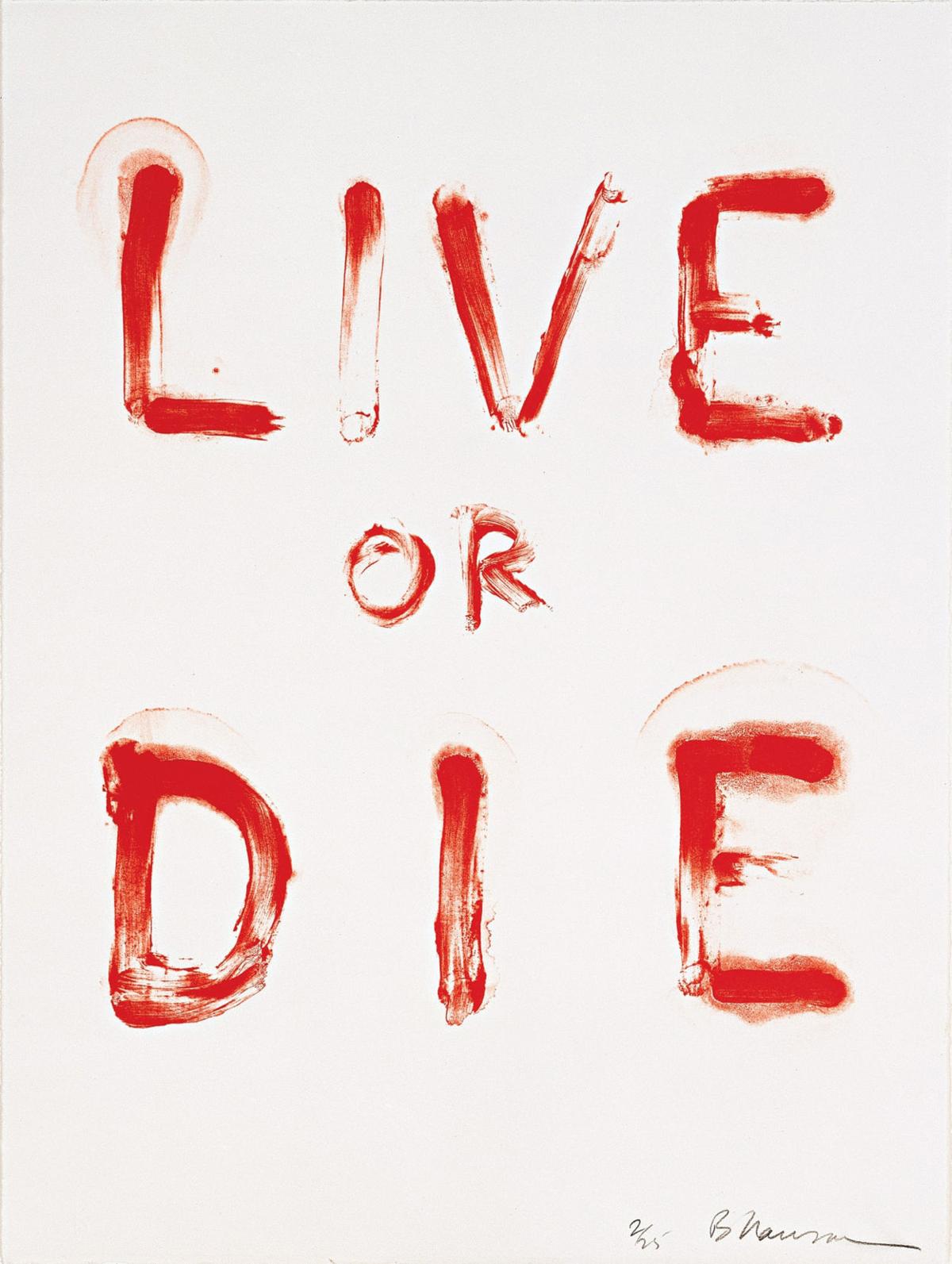 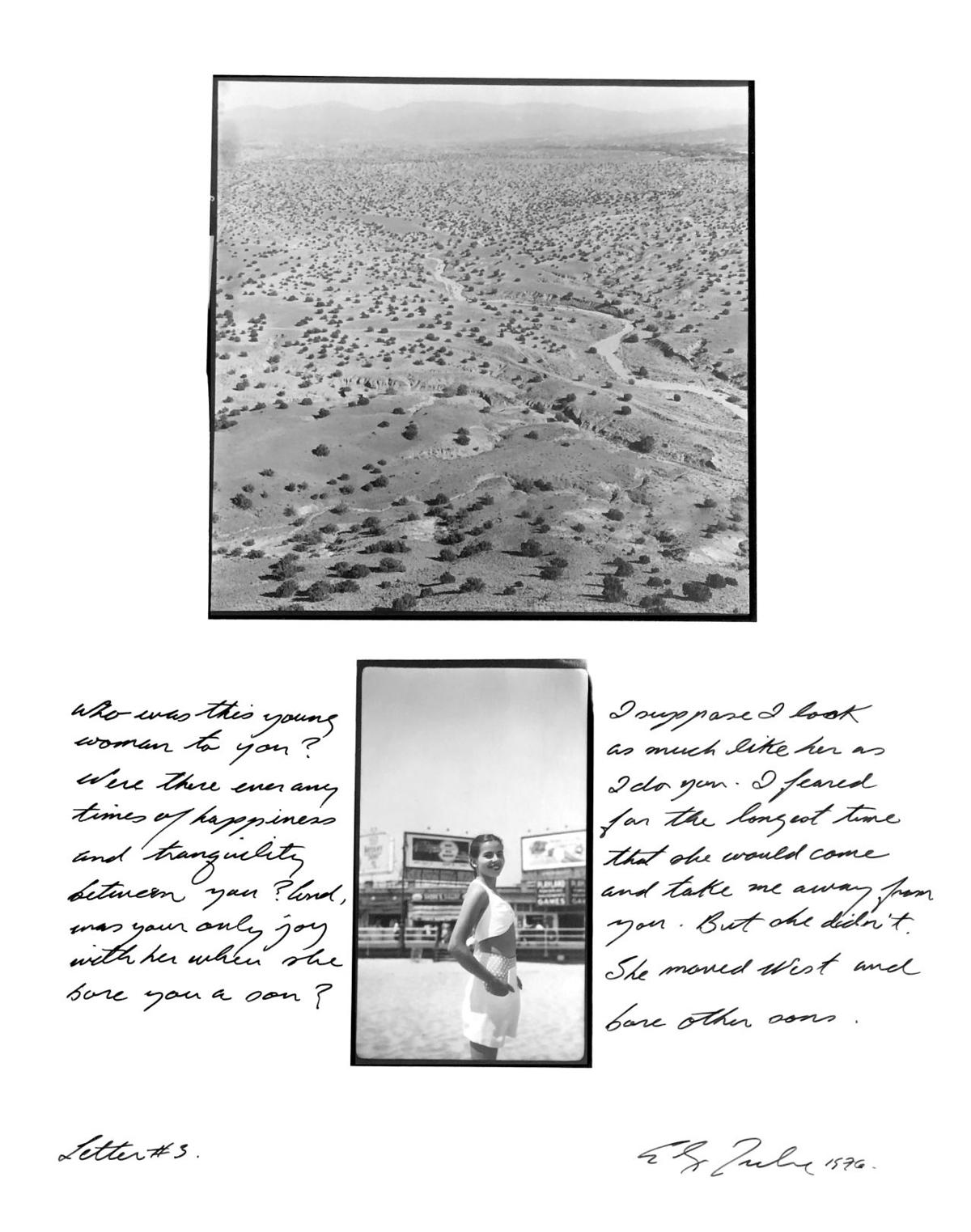 For millennia, visual art has been used to document moments in time. Historically, words were considered unnecessary because the image presented stood on its own. But contemporary artists often combine words and images to expand upon and deepen the meanings of both — sometimes playfully and sometimes earnestly.

Word Play is a new exhibition of more than 40 works that explore the intersection between words and images, opening at New Mexico Museum of Art on Saturday, Feb. 8.

“Word Play cuts across the collection,” says Kate Ware, the museum’s curator of photography. “It isn’t about any one specific artist or any one specific culture. It’s about a device that artists use to communicate and get our attention. Many of the works are very earnest, but some of them are also very playful.” We look at combinations of words and images all day long, she says, “and we don’t think about it so much. This is a way to call attention to that and also to invite people to examine that relationship.”

Two 2015 pigment prints by Hopi artist Michael Namingha are graphic in spirit and inspired by the Rorschach “inkblot” tests that some psychologists have used to explore a person’s emotional life. In YES and NO (two separate pieces on loan to the museum from Niman Fine Art), the artist has printed “yes” and “no” in a white sans serif font in all caps on a black background. Each word is printed twice so that it appears as a mirror image of itself. The pieces are part of a larger series that plays with words that have dual or evolved meanings. With YES and NO, Namingha says, “They should be simple answers, but what do they really mean? And because of the mirror image, some people can’t read them. Sort of like inkblots. They see something else. So, it’s more complicated than it seems. It’s up to the viewer to decide what it means.”

Photographer Alex Traube takes a different approach; he combines images of people he knows with diaristic or epistolary writing about memory. In Letters to My Father (1976), Traube’s black-and-white photos of people, places, and dogs are paired with handwritten notes to his father, who died when Traube was 17. The artist created the series when he was 30, when he had just enough hindsight to want to explore the past. He says the series is also indirectly about his mother, who moved away from the family when he was a toddler. In Letters to My Father #3, an old photo of her is arranged beneath an image he took from the top of Black Mesa, a sacred site at the San Ildefonso Pueblo that he has since realized he wasn’t supposed to climb. On either side of the image of his mother, he has written to his father:

“Who was this young woman to you? Were there any times of tranquility and happiness between you? Was your only joy with her when she gave you a son? I suppose I look as much like her as I do you. I feared for the longest time that she would come and take me away from you. But she didn’t. She moved west and bore other sons.”

A more playful, less narrative approach to combining text and image appears in Kenneth Chapman’s undated mixed media portrait. A line drawing with a Pop art, Mad magazine quality shows a woman reading a newspaper with headlines that seem to float about on the front page. Ware says the collage was probably made around 1965, which is when the artist gifted it to the museum. (Chapman died in 1968.) “We don’t really know much about that piece, but I’m not sure that it’s been shown. It seemed really delightful and charming.”

In Lalla Essaydi’s 2004 chromogenic print Converging Territories #30 (on loan from Elizabeth Lea), two women and two younger girls wear white robes covered in sepia-toned writing that Ware says is in Arabic. The youngest girl’s face and dark hair are visible, while the girl next to her has her head covered. The next woman’s eyes are visible, and the fourth woman has her face completely obscured by a burqa. The floor beneath them and the wall behind them are the same white as their clothes and are covered in the same writing. Here, the writing functions more as texture than message, as the lettering is so cramped that even someone who could read the language would likely struggle to make it out.

The curator hesitated to interpret a meaning, saying she wasn’t an expert on Essaydi’s work. “But giving a voice to Arab women is its own political act,” says Ware, who divided the exhibition into seven thematic sections that include Free Speech, Speech Bubbles, And Now a Word From Our Sponsor, and Mother Tongue.

Jaune Quick–to–See Smith uses humor to give voice to Native women in two pieces from her 1991 series Paper Dolls for a Post-Columbian World. The watercolor and pencil drawings are simple and bright, and just a little crude — the kinds of images that would attract a child or anyone who remembers flipping through paper-doll books and carefully punching from the pages’ underwear-clad figures and costumes to cover them. In Barbie Plenty Horses and Maid’s Uniform for Cleaning Houses of White People After Good Education at Jesuit School, Smith comments on the forced religious conversion and assimilation of Native Americans by the American government.

Ware says Smith’s pieces are among the more politicized in Word Play. “Smith is really playing on that familiar kind of play, the familiarity of paper dolls, and then kind of turning it into something a lot more serious.” ◀