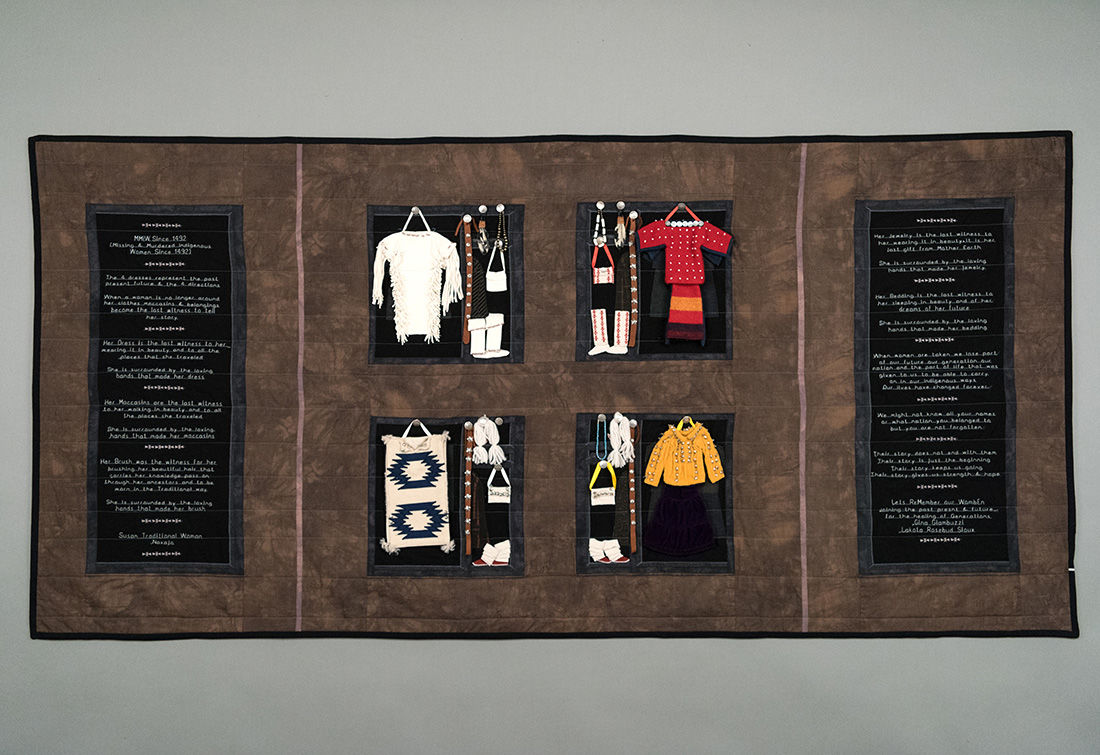 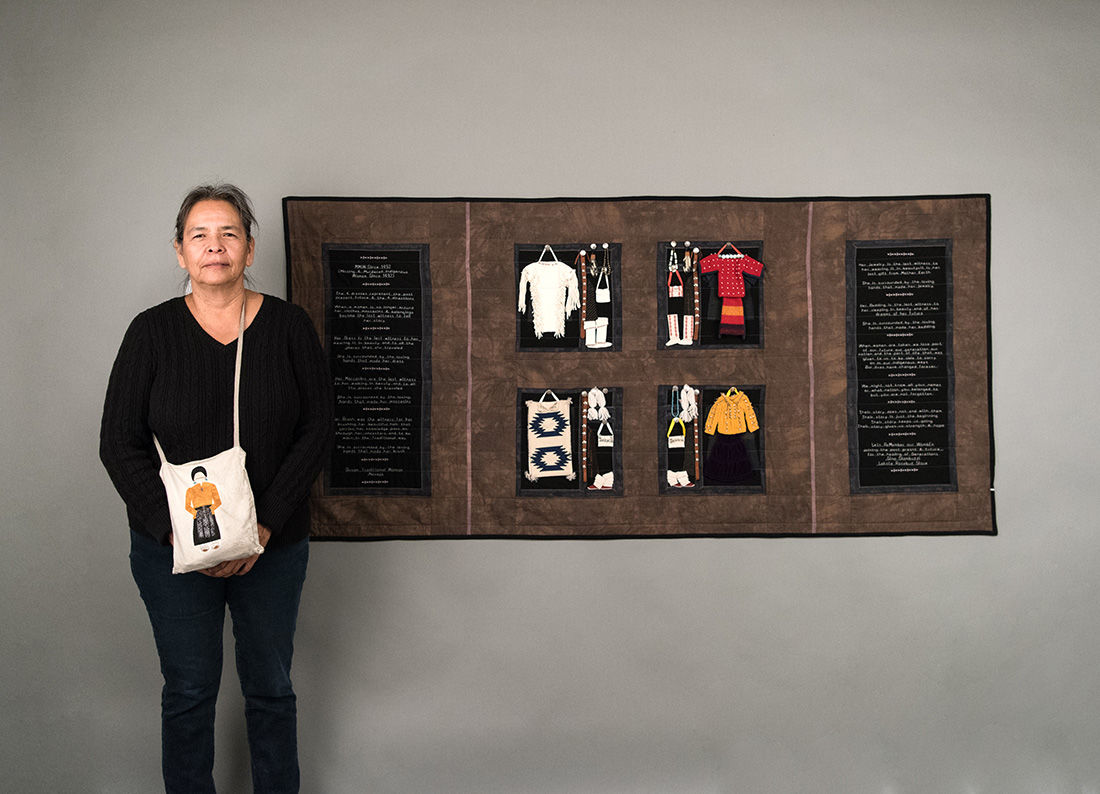 Four careful arrangements of women’s clothing and bedding sit at the center of Missing and Murdered Indigenous Women Since 1492, a quilt by Susan Hudson. Hudson, who lives on the Navajo reservation in Sheep Springs, New Mexico, is a storyteller who uses a modern approach to ledger art and a lifetime of hand-sewing skills to convey an array of traumatic narratives. She has won numerous awards for her quilts since the 1990s, including a first-place prize in textiles at the 2017 Santa Fe Indian Market for Missing and Murdered, which is on display at the Museum of International Folk Art through Sept. 30. She is well known, but — perhaps because her medium is the blanket, ostensibly an object of comfort — the exact nature of the stories it tells can take people by surprise.

“Sometimes the stories on my quilts make people uncomfortable. But art involves emotions — take it or leave it,” Hudson said. “They have a lot of things to say about what they think I’ve done with the quilt, or what they think I should have done. I listen. But the stories are about my family. It’s not the government’s history. It’s my history — our history,” Hudson said.

The dresses and moccasins in Missing and Murdered might appear at first to be doll clothes or something otherwise cute and nonthreatening, but they are intended to symbolize the last remnants of lives snuffed out by violence or radically altered by sexual assault. The quilt is a triptych; panels on either side of the center are covered by embroidered words that honor indigenous women who have been killed or went missing to little public notice — often at rates significantly higher than those of white women. “If we were to lay the quilt down and unfold it, it would look like you were opening up a closet. It represents that these young ladies were human beings, not pieces of trash. If they were blond-haired, blue-eyed, non-Native women, it would be all over the news,” Hudson said, adding that she is related to Ashlynne Mike, the eleven-year-old Navajo girl who was molested and murdered near Shiprock in 2016.

The embroidered words, hand-sewn over three months as a labor of respect, read in part, “Her dress is the last witness in her wearing it in beauty and to all the places that she traveled. Her moccasins are the last witness to her walking in beauty and to all the places she traveled. Her brush was the last witness for brushing her beautiful hair that carries her knowledge passed on through ancestors and to be worn in the traditional ways. She is surrounded by the loving hands that made her dress, her moccasins, and her brush.”

Hudson’s mother taught her to sew when she was about nine years old. Her mother bought their clothes secondhand and then remade them, and then they made quilts from the scraps. Hudson’s mother learned to sew in a boarding school at St. Joseph, Arizona — a scary place where, she told her daughter, they cut off her hair, made her wear drab clothing, and punished her for speaking Navajo. “When she first went to school, she was given a piece of chalk. She had never had chalk. She went around and wrote her name all over. She got into trouble for that, but I told her she’d been doing ledger art.” She became fascinated by her mother’s past — and how what she and previous generations went through continues to reverberate throughout the family. Her quilt Tears of Our Children, Tears for Our Children (2013) — now in the collection of the Smithsonian National Museum of the American Indian in Washington, D.C. — reflects the intergenerational trauma wrought by the boarding schools.

“I showed how ignorant and racist the government and missionaries were, and everyone that had schools that literally destroyed lives, killed families,” she said. “My grandmother said her sisters and brothers were herding sheep, and all of a sudden this guy came riding on a horse and he just picked them up and took them to where there was a wagon and shackled them to the wagon. She told me that the matrons at the schools were so mean that they would clip the girls’ hair as close as they could to their heads, even clip off some skin, and they would have scabs. The girls would get these scraps of fabric and tie them into bows in their little bits of hair, to try and look a little bit pretty.”

The images in Hudson’s quilts come to her in dreams she described as a being like a Mutoscope — an early coin-in-slot motion-picture device that allowed a viewer to flip through images attached to a reel. “They have a handle and you can go as fast or as slow as you want. I’ll see pictures in front of my eyes like that,” she said. “If I start dreaming in quilts, then the pictures come in fours. If they have a lot of meaning, then I’ll sit up and start crying about it, and I know I’ll make that one. If I get stuck, I pray a lot. The dream will tell me how it’s supposed to be.”

Hudson has made quilts about the Long Walk of the Navajo — in 1864, her ancestors were forcibly marched from their lands in what is now Arizona to a prison camp in Fort Sumner, New Mexico, also known as Bosque Redondo. She quilts to honor their sacrifices and strength; many women who survived the Long Walk made blankets in the camp, never letting go of their traditions and creativity. People who get upset with Hudson for her quilts often insist that their ancestors were frontier soldiers who did not hurt Indians. They want to convince her that she must be wrong about her family’s stories.

“They want me to sugarcoat what I’m depicting. I’m sorry, but I’m not going to do that. Sorry if you’re descended from soldiers, that your ancestors were murderers and baby-killers,” she said. “They get pissed off. I tell them to think about it — what was your soldier? A cook? I tell them straight out.” ◀

▼ Susan Hudson: Missing and Murdered Indigenous Women Since 1492; through Sept. 17

Artist Pop Chalee (1906-1993) was known for her influential and stylized depictions of forest scenes and wildlife, with graceful paintings of deer that bear a resemblance to the lithe young Bambi in Walt Disney’s animated classic. Critics have often assumed that Chalee adapted the so-called “Bambi” style to suit her own work — but it could well have been the other way around.