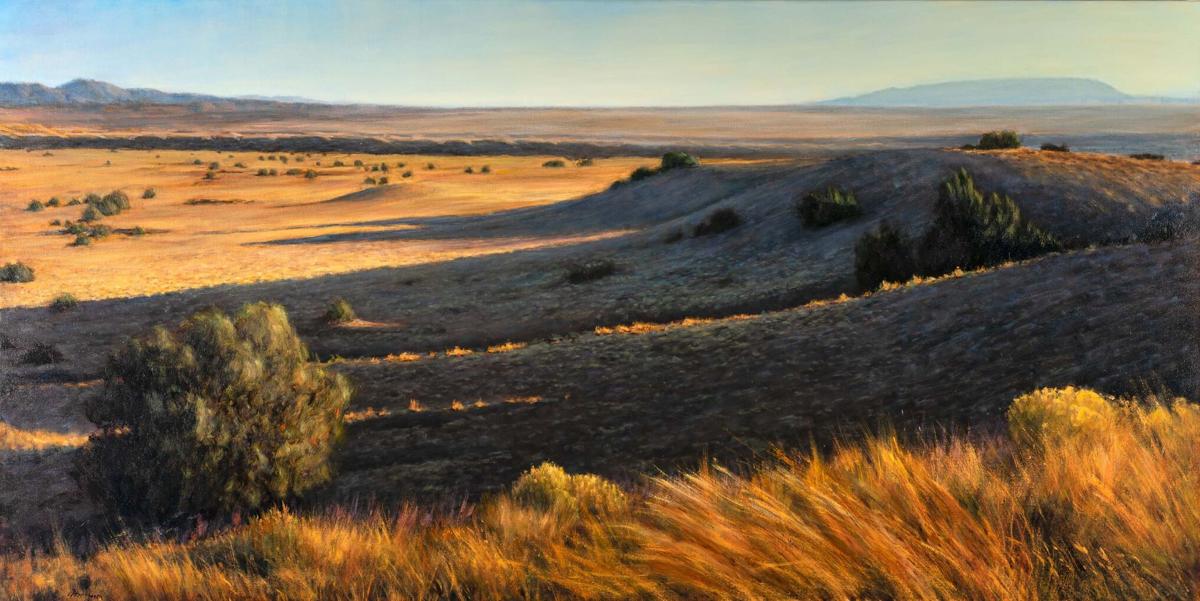 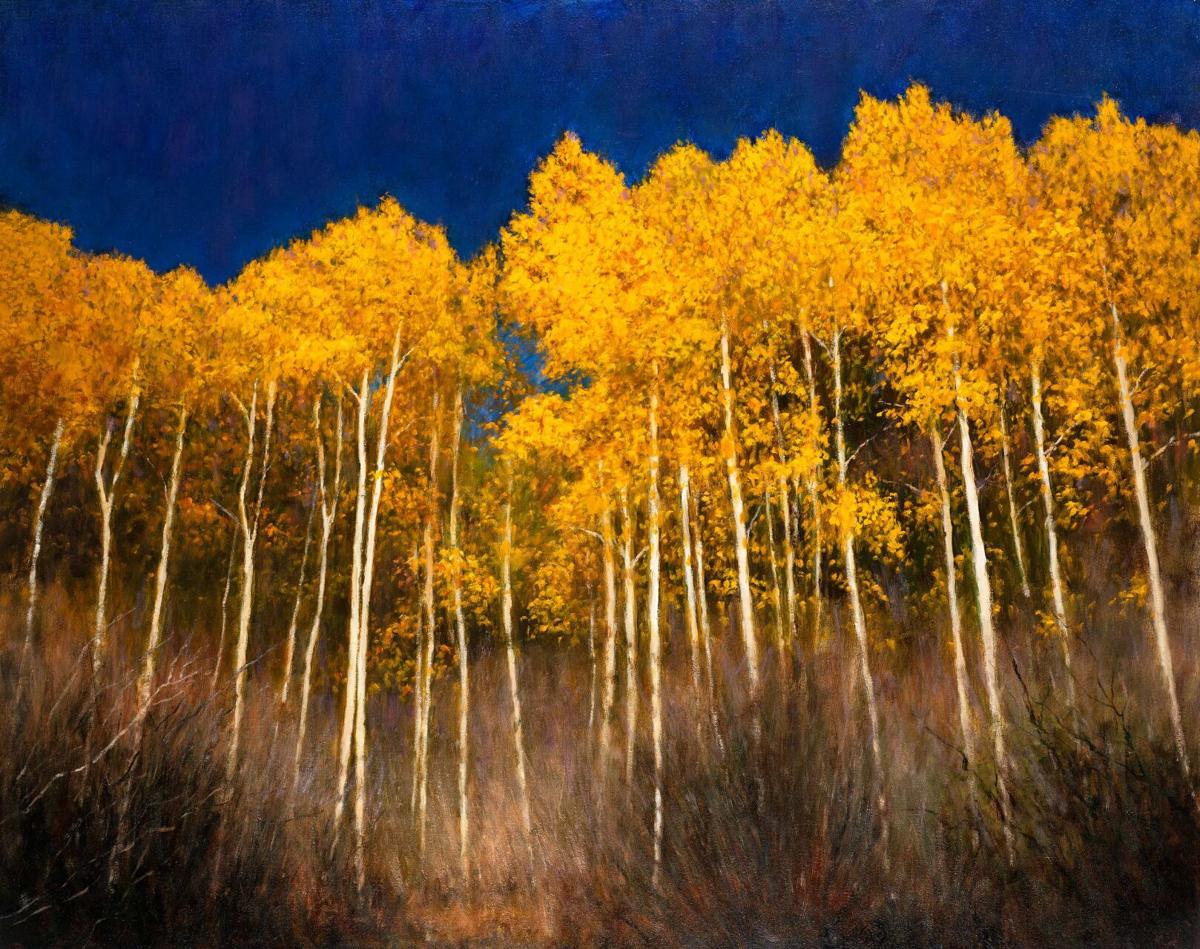 A good realist depiction of a landscape is something that can be read — not just perceived in terms of color and mood, but deciphered in terms of its compositional elements. Take Santa Fe-based painter Peter Hagen’s Long Shadows (2021), a 3-by-6-foot horizontal depicting a majestic view of Northern New Mexico’s varied terrain, with the high ridge of the Sandia Mountains rising far off in the background. Shadows broken by lines of sun-touched tufts of grass sweep from the gently rolling hills in the mid-ground and draw the eye to sagebrush at the left side of the canvas. You can read the painting from right to left, from the distant Sandias to the foreground sage, where a riot of gestural brushstrokes coalesce to form windswept grasses and blooming chamisa.

“Landscapes are challenging, and there’s a lot going on there,” says Hagen, who’s been painting the terrain for more than 30 years. “I like to capture the moment, and, to a degree, I try to find the abstract in the shapes.”

Whether he’s painting stormy, overcast, or deep blue skies, a winter landscape or an autumn scene, Hagen evokes the natural beauty of a changeable natural world. And it’s one that’s nearly always close at hand.

“Everything here is probably within a half-hour to an hour away,” says Hagen, who presents a new body of work in the exhibition The Good Earth at McLarry Fine Art. “Years ago, I would go long distances. But, now, I find that the beauty and the compositions that you want are right out your back door if you just open up your eyes.”

Orange leaves set the cottonwoods ablaze along an embankment at the Leonora Curtin Wetland Preserve in Spring Water Pond (2021) and crown the aspens of the Sangre de Cristos in an undulating wave of fall colors in Autumn Princesses (2021), its vibrant golden tone a sharp contrast to the dusky indigo sky above the trees.

Autumn Princesses is richly varied when read from top to bottom. The glow of the aspens give way to a moody landscape of bare, low-slung branches reaching upward and out as if trying to grasp at the opulent majesty high in the trees.

“I think every location has some kind of emotion going on there,” Hagen says. “I like to capture that.”

Hagen wasn’t always a landscape painter. Born in New York in 1944, and raised in Connecticut, he’s been drawing since at least the second grade. Hagen studied at Connecticut’s Silvermine School of Art in New Canaan before attending the University of Bridgeport, where he majored in graphic design. Like a lot of young artists, he was drawn to New York City and spent a few years living in Brooklyn. But Hagen was put off by abstraction’s dominating influence on the East Coast art scene.

“I didn’t know it at the time, but landscape painting is what I wanted to do.”

Hagen made a move out West in the early 1970s, settling first in Colorado, where he spent 15 years working on a ski patrol and in real estate.

A nature lover and avid hiker, Hagen says that being in the landscape rekindled an early love of painting and drawing.

“It really started when I moved out to the West and saw how dramatic and wonderful the landscapes were,” says Hagen, who was attracted to New Mexico primarily by the realist works of the Taos Society of Artists. He followed his inclinations to study them in-depth, and he relocated to Taos in 1987.

Hagen’s work is a far cry from photorealism, although he captures the essence of landscape in such a way as to make a scene appear full and rich with detail. But the brushstrokes are evident. A simple splash of color or dot on the landscape hits the eye as something recognizable — a leaf on the water, a small outcropping of rock, or a stand of trees — without the need for mimetic precision. Separate such elements out of the composition, however, and they’d appear more like the shapeless applications of paint they really are.

It isn’t the details that attract Hagen so much as the mood or feeling of place.

“It’s the space, the color, and the shapes,” he says. “The landscape is alive. It’s got contrasts, extremes. We’ve got the monsoons ... in July, and they come in with such ferocity. They come in, they hit you, then they’re gone. Growing up in the East, there’d be a grey day and maybe a little rain shower. But out here, it’s pretty dramatic.”

Hagen also paints a lot of fall scenes enlivened by a profusion of yellows. Chamisas are a common subject. So are aspens, flaxen grasslands, and the blooming yellow wildflowers of September and October.

The open land forms the essence of some of the works in The Good Earth, with its idyllic representations of a land unmarred by human activity, save the occasional unpaved road where the ice and snow of winter still linger. In others, interior infernos burst through the roiling clouds, threatening the still and quiet desert land below. But always there’s some sense of the ageless allure of the desert Southwest — a rustic arcadia within easy reach. ◀