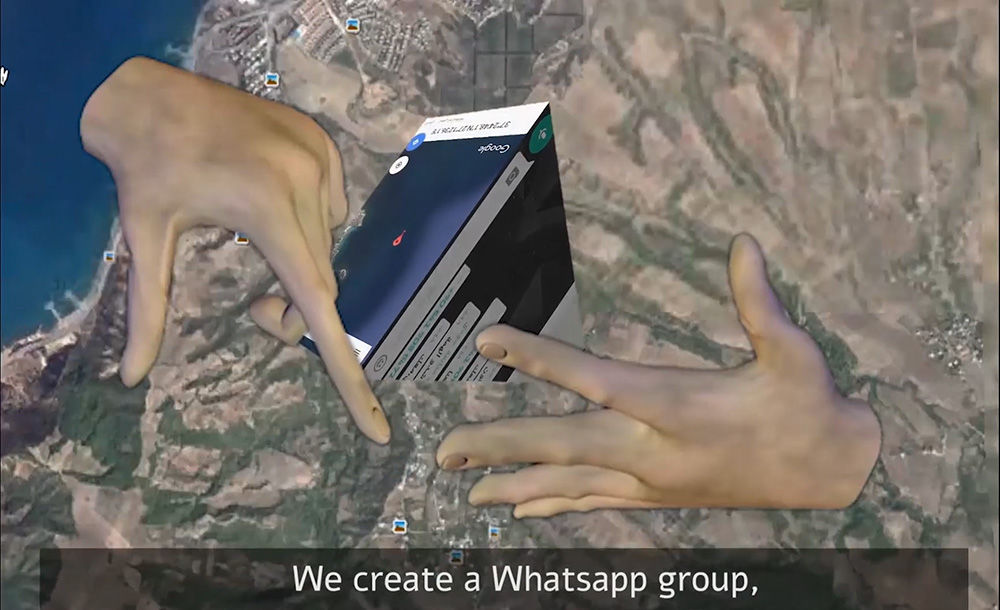 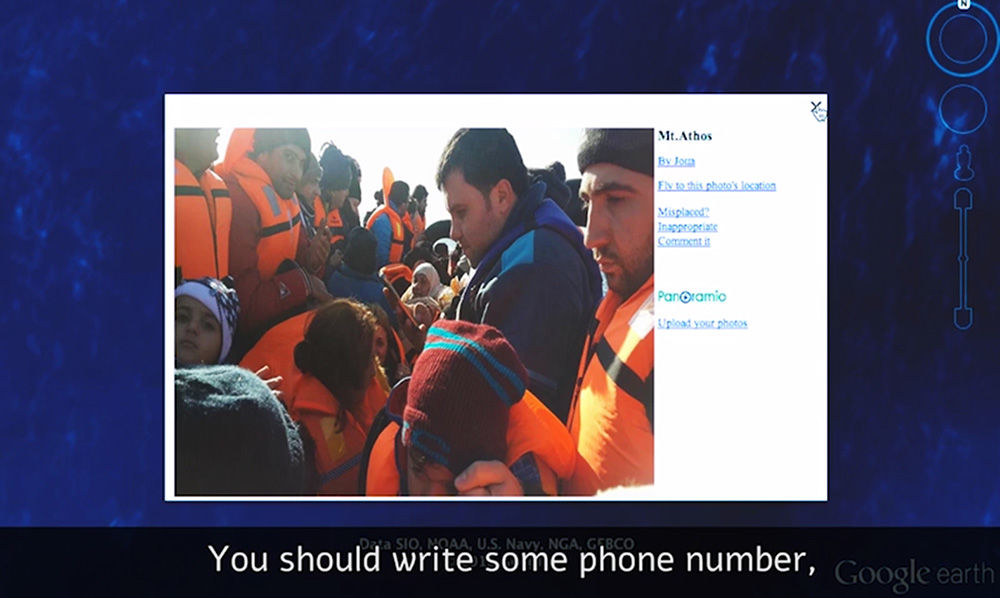 If you had to leave your home indefinitely, under threat of violence, and you were unable to take much with you, chances are the first thing you would grab is your smartphone. It would keep you connected to family, as well as the world events causing you to flee, and — if worse came to worst — you could use the camera function to upload your final moments if, say, the raft you were traveling on sank into the sea.

In the summer of 2015, as thousands of refugees flocked to the mainland of Europe via the Aegean Sea, Israeli photographer and video artist Ronnie Karfiol found herself obsessing over news and social-media postings, trying to keep up with the crisis. “I discovered some tweets that were filled with rage over the fact that the refugees carried mobile smartphones. Some people simply saw it as a complete contradiction to how a refugee should be — financially poor, that is,” Karfiol said. And then she stumbled upon an article in The Guardian in which a refugee told a reporter that without Facebook, he would not know where to go on the route to Europe. Interest piqued, Karfiol used her Arabic language skills to dive into the vast world of refugee support groups on the social network, where she found everything from people looking for lost relatives to human traffickers charging for passage on overcrowded rubber boats, along with loads of live “boat selfies” and geolocation information posted by refugees who were drowning.

“All of this was overwhelming, but at the same time I was hooked,” she said. Karfiol collected the evidence she found of the ways that smartphones and related technology are integral to the contemporary refugee experience and created an archive and art project, Relief and Monitoring. If one were to come across the website (www.reliefandmonitoring.org) with no prior explanation, it would appear to be a technology-driven relief organization rather than a documentation of individuals on their own in dire situations. She wanted to introduce people — especially those in Western societies — to the plight of those who must escape a war zone and the sensation of being so alone that your most trusted friend is your smartphone. After many months of sticking to the facts of the news and the stories she found in the Facebook groups, “I gave myself some artistic freedom at last and decided to view this from the point of creating a tangible information center for future refugees.”

The video element of Relief and Monitoring screens as part of the Currents New Media Experimental Documentary Shorts program. Included in the video is a found voiceover by a Syrian woman in exile who posts updates and routes through the Aegean and Mediterranean seas to a Facebook group. “Discovering her voice was quite a revelation. She explains so bluntly the terrible things that are going to happen in the sea,” Karfiol said. “She smashes every false hope [refugees] might have — and in the end, she even asks them to promise that they would try to dissuade anyone from actually crossing the sea. It is a great firsthand example of how complicated the whole immigration decision is for them. You risk your life because you have nothing more to lose.”

Karfiol said the whole idea of refugees being poor and uneducated — and in the logic of some, therefore not entitled to possess smartphones — is ill-informed. Syrian and Kurdish people have mostly fled their country because of war, not economic disenfranchisement. “We need to understand that many of them come from middle-class households and may be educated, with a university degree. They had proper first-world work and are definitely as fluent with technology as a person living in Europe, the U.S., or elsewhere. Actually, we might need to grasp this fact: The really poor ones hardly have the financial means to venture on this trip to life. It is quite costly.”

Relief and Monitoring has been installed a number of ways at galleries and festivals. In other venues, Karfiol has created a kind of futuristic information center to enhance the surrealism of the project. “I try to respect the intelligence of viewers, since it is important to me not to represent this phenomenon as an Orientalist extravaganza of bloodshed and medieval tragedy, a unique war crime that happens far, far away — but rather as a very cold, bureaucratic, technical, dystopian possibility that might next strike just about anywhere we call home.”

Karfiol collected the evidence she found of the ways that smartphones are essential to the contemporary refugee experience.

This is the eighth year the festival has been staged at El Museo Cultural de Santa Fe. The main room at El Museo measures about 12,000 square feet, and there are several other exhibit spaces in the Railyard building (plus a handful of other exhibitions and events staged outside and in partner venues). How do curators Mariannah Amster and Frank Ragano prepare the spaces for such a variety of presentations by over 100 artists? > READ STORY

For her virtual-reality installation Catacombs, featured in Currents New Media, Claire Hentschker consumed hundreds of hours of YouTube footage of abandoned malls, extracting 3-D elements from the videos to make an immersive 360-degree environment that feels like a long, spacey walk through an abandoned mall. > READ STORY

We don’t think about the physical act of balance in our everyday lives because it’s intuitive. We don’t, for the most part, have to remind ourselves to shift our weight and counter the forces that would knock us off-center. We just do it, as naturally as breathing. Artist Jacob Tonski uses balance in his work in much the same way a person would use it to stay upright — through internal forces. > READ STORY

Sleeping With the Devil mixes bits of Yang’s Skype exorcism with footage of other people’s encounters with Spiritual Freedom Church's Bob Larson, as well as clips of faith healers and their congregations — some of which date to the 1950s — that she culled from YouTube and Vimeo. > READ STORY

In a way, making a hologram is like making a photograph — only instead of creating an image captured through a lens, you’re recording interference patterns in an object’s light field and capturing it on a holographic plate. “It’s a true light document,” said artist August Muth, who is curating a group show of works in holography. > READ STORY

As she approached her fiftieth birthday, Sachs, whose art tends to sit at the intersection of personal knowledge and world history, sought out other New Yorkers who were born between 1958 and 1964, invited them to her apartment for the weekend, and filmed them telling stories about their memories. Her experimental documentary feature, Tip of My Tongue, screens as part of Currents New Media. > READ STORY

I got algorithm: Liu Chang

Chang’s techniques were honed at New York University’s Interactive Telecommunications Program, a two-year graduate program that suggests on its website that it might be best described as “the Center for the Recently Possible.” On Saturday, June 10, as part of the Currents New Media exhibition, Chang leads Creative Coding for Artists, a workshop that will offer a bite-size slice of the tech-meets-art education she received at ITP. > READ STORY

Perhaps there’s an expectation that so-called new media represents the most advanced and state-of-the-art technologies out there. Sometimes that’s true. But for Morse, who describes his work in Currents New Media as low-tech, this presumption kept him from applying to the annual event for years. In a way, Morse still works with ink on paper. > READ STORY

Staeger’s piece at Currents New Media is a psychedelic montage of images based on a vision of stretching and tearing fabric, with accompanying sounds and music that include a lovely rendition of “Hush, Little Baby.”  > READ STORY

The local artist has new-media work in two interrelated exhibits: Currents New Media, where she’s showing her installations Darkroom and Yoni-4-Joanie; and David Richard Gallery’s exhibit Beyond, in which two single-channel videos describe her work. “They’re sort of two sides of a coin,” Farrell said of the Currents installations. “They reflect off each other.' > READ STORY

Behind the mask: "Burnish"

People are looking into a tent through little holes. Whether it’s a simple aperture or a fisheye lens or actually a window to a video, they see and hear extraordinary things inside this mini-theater. A participant is inside, interacting with somebody wearing a most unusual mask. “It’s a bit like looking through the looking-glass,” Mark-David Hosale said. “We have this idea that you might have a dimensional shift, even.” > READ STORY