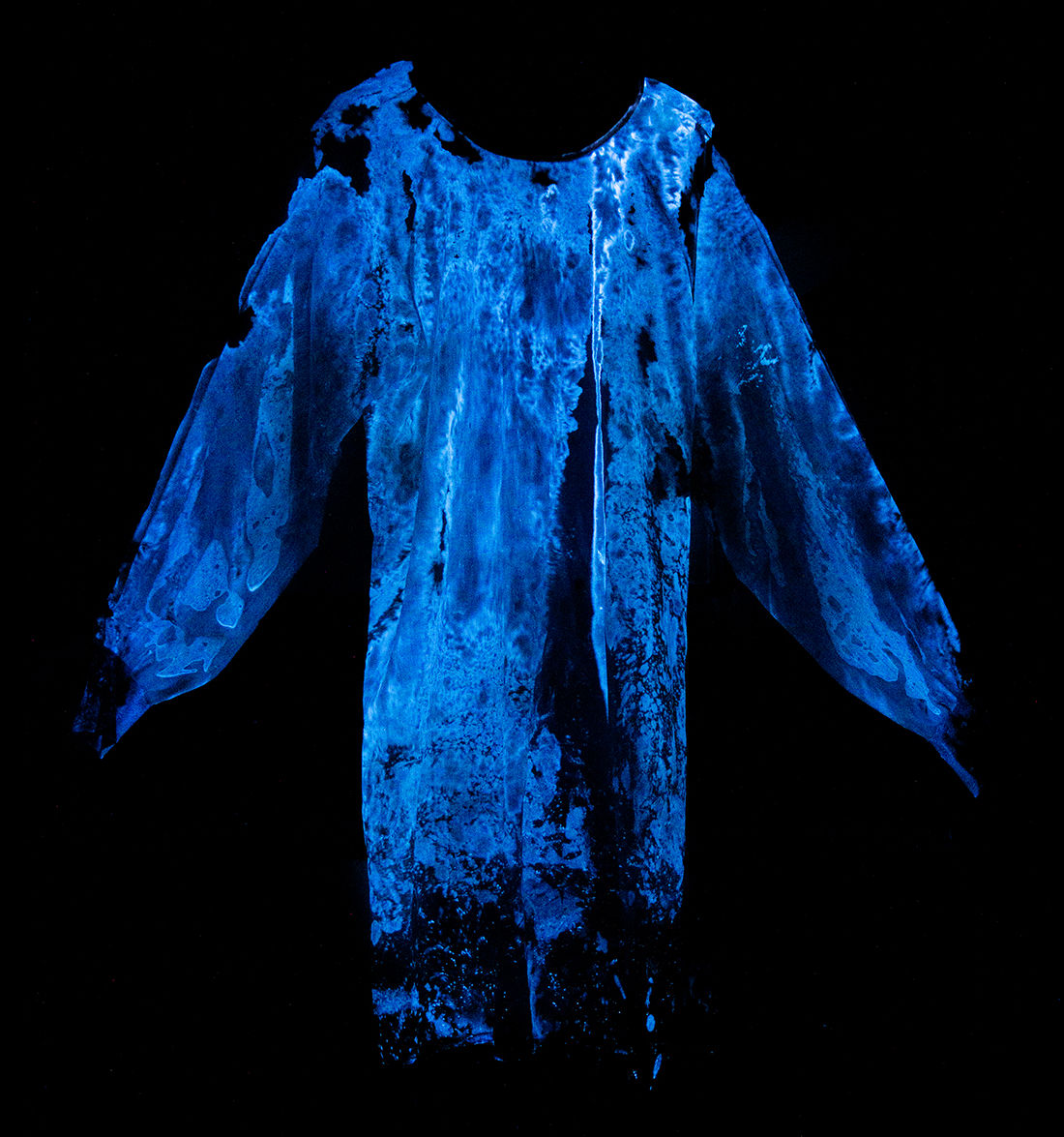 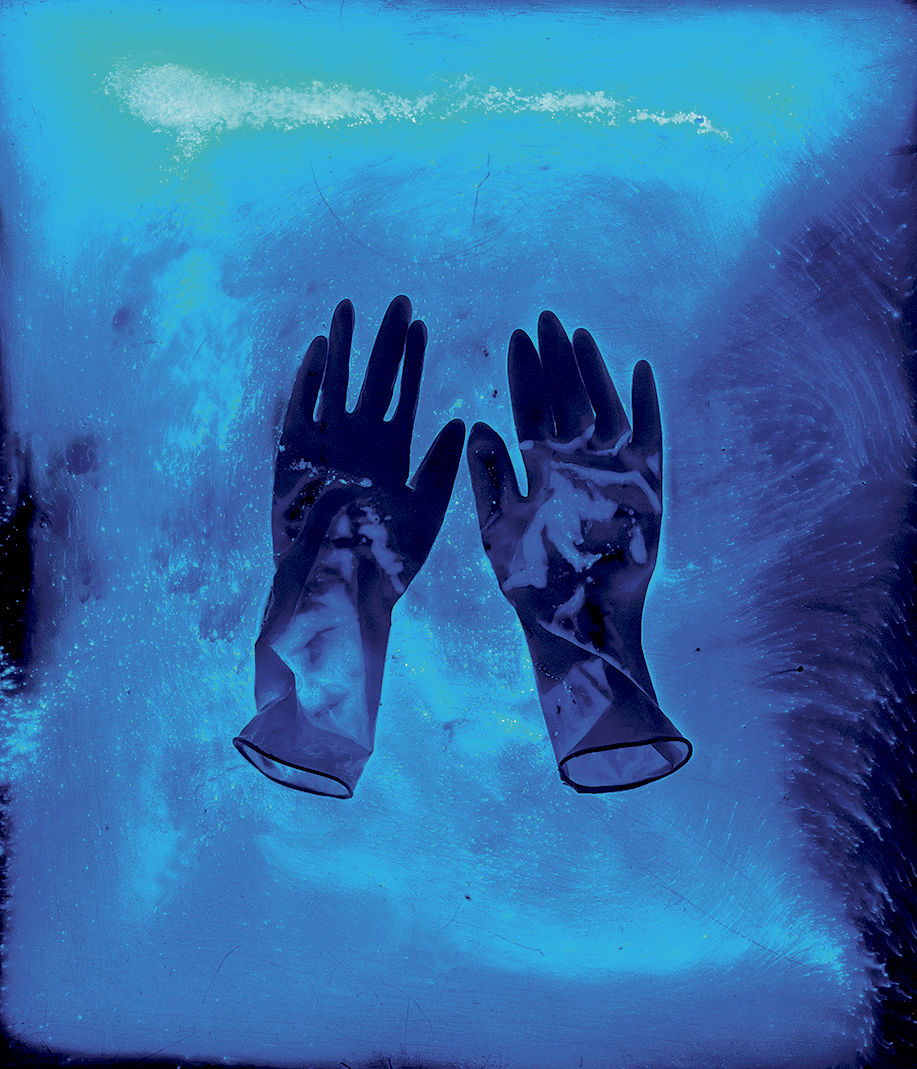 Few popular television shows have launched as many spinoffs as CSI: Crime Scene Investigation, which premiered on CBS in 2000. There’s something compelling about watching crime scene investigators relying on scientific analyses to solve crimes and luminol to detect evidence. Luminol, a soluble crystalline compound used to reveal blood stains with an eerie blue chemiluminescent glow, is just one of the many fascinating tools available to crime scene units.

Alivia Magaña, an Albuquerque-based autopsy technician found another use for the spectral glow of luminol: art photography. It isn’t so separate from her career in forensics. In fact, Magaña also makes use of all the protective equipment and stainless-steel tools used in medical autopsies, which she chooses as her subjects. Although they show the hidden blood, even on washed and sterilized garments, the images are evocative and atmospheric rather than morbid. The latex gloves, aprons, scrub suits, and impervious gowns relate to her postmortem examination work, but graphic and sensationalistic images of actual death are something she avoids. “I’m very mindful not to comment about death and emphasize that disturbing quality because I don’t see it that way,” Magaña said. “I have a very curious fascination with it. I find it really engaging but I’m also mindful of making it more taboo than it is.” Her exhibition Looking for the Light Between is currently on view at Ellsworth Gallery.

“It reminds me a little bit of the paranormal, or this realm you’re trying to tap into but can’t conceive of or can’t get at.”

After receiving her BFA at Kansas State University in 2015, Magaña relocated to Albuquerque and is currently pursuing an MFA in photography at the University of New Mexico. Art, she said, was always her interest. She became involved in forensics while she was working at the Office of the Medical Examiner through happenstance. “They had an open position for a forensic photographer. I got in that way and I just stuck around long enough that when other opportunities opened up, I got to move up the food chain. I don’t have a background in anatomy or physiology or anything.”

The photographs on view at Ellsworth are all from a body of work created this year. For Magaña, Looking for the Light Between reflects society’s behavior toward death and the fear of engaging with it directly in any emotional way. In her autopsy work, for instance, she’s shielded by protective gear from the bodies undergoing the procedure. “There’s all these layers and layers,” she said. “To me, I kind of see that as a metaphor; there’s so many layers between ourselves and death in this culture. The gowns are this physical barrier. We have five layers of gloves or an apron over a gown over something else.” But the title of the show itself stems from a phrase she heard when training in autopsy procedures. “One of my colleagues was teaching where to cut to eviscerate. He pulled some tissue apart and said, ‘Look for the light between and that’s where you cut.’ I thought, in the weirdest way, it was so poetic.”

▼ Alivia Magaña: Looking for the Light Between; through Nov. 18

Much is revealed by the chemiluminescence, so much so that an object as simple as a pair of latex gloves proves a retainer for what it previously came into contact with. The history of the things it has touched remains a part of it, etched in blood. But blood is doubtless not the first thing one notices. For instance, in her Glove #1, a single glove is aglow with a life of its own, not so much appearing coated in light because of the luminol, but possessing a light-filled inner dimension. In another image, an apron tied at the waist more closely resembles a fragile threadbare garment ravaged by time and use than it does the apron of a medical examiner. The sterilized stainless tools such as hooks and scalpels are oddly free from all traces of blood. The photos of these objects look like negative images or silhouettes against the deep blue hue. Only in the strange blue light can that hidden reality, present but unseen without the luminol, be glimpsed, as though the veil between the worlds of the natural and supernatural has been briefly lifted. “It reminds me a little bit of the paranormal, or this realm you’re trying to tap into but can’t conceive of or can’t get at,” she said.

The idea of being in between two states of being is also of personal concern to Magaña in her dual role as artist and photographer, on one hand, and autopsy technician on the other. Her work at the Office of the Medical Examiner is not always so clinical or so sterile. “That realm is so confidential and kind of in its own bubble,” she said. “Being an artist in that space, you kind of go off your emotions a little bit and have that a little bit more in the forefront. How do I connect this very disconnected place? What happens there and what stays there, stays there, so how do I bring that into the reality realm? It very much feels like a dream world or otherworldly thing.”

Unlike many of her colleagues, Magaña isn’t actively pursuing a medical degree. “I had a much more curious eye, and it’s kind of an uninformed eye, as well. I’m on the job but also thinking as an artist while I’m in that space.” Photography opened the door to forensics for her and, as her commitment, she marvels at its broader applications and potential. “I like to think of photography as this revolving door for myself.” At Kansas State, she was part of an exhibition team photographing ghost towns for the history department. “I love how many avenues photography can let you go down. I might not want to go to medical school for eight years, but I can have a little bit of an in this way.” ◀