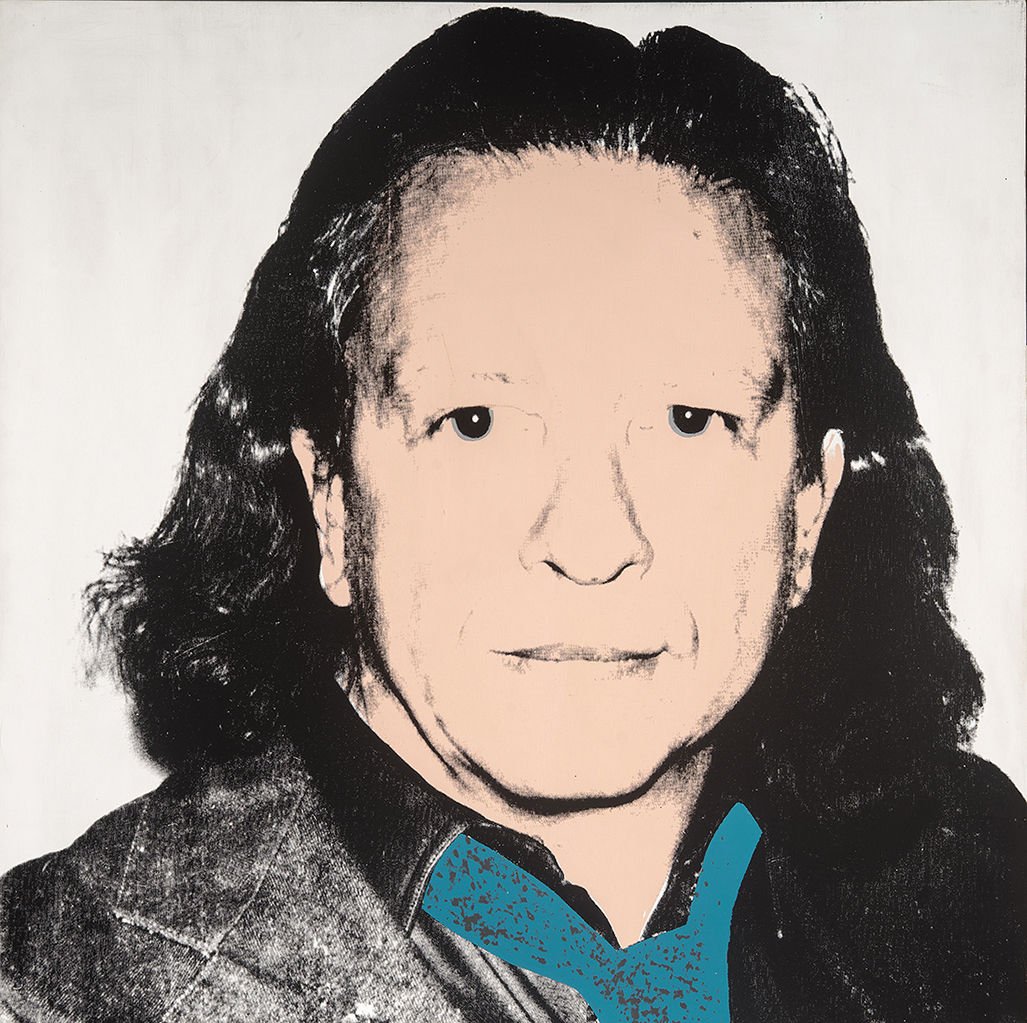 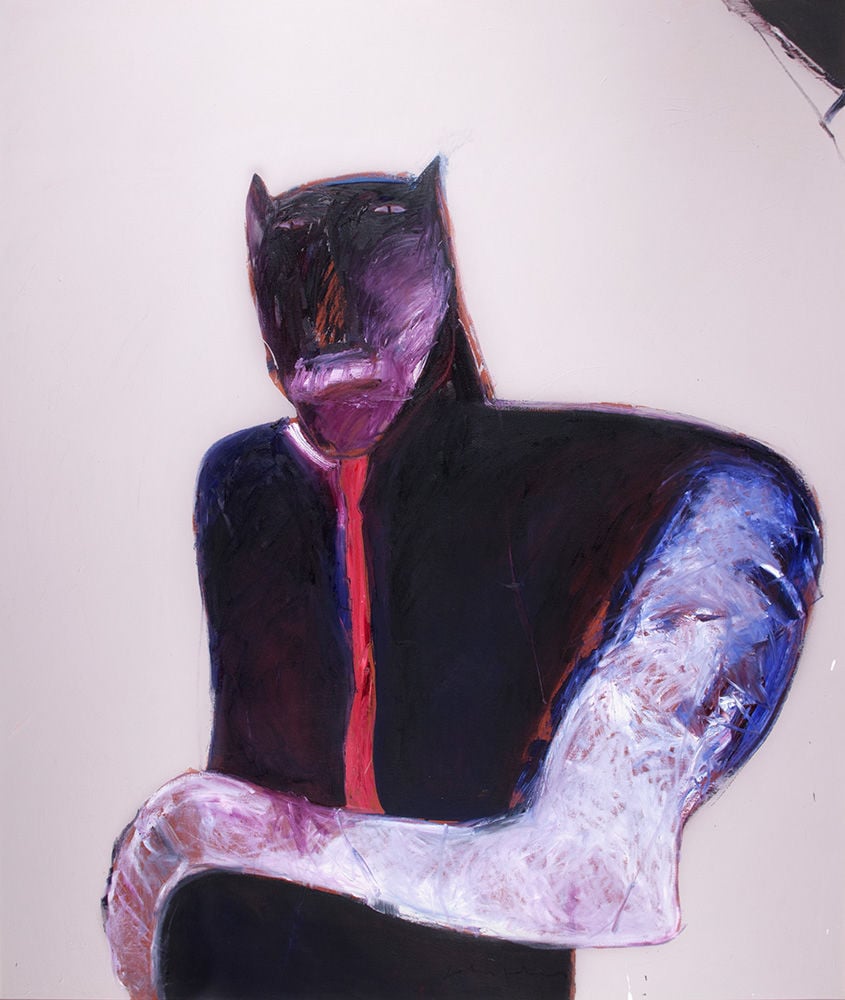 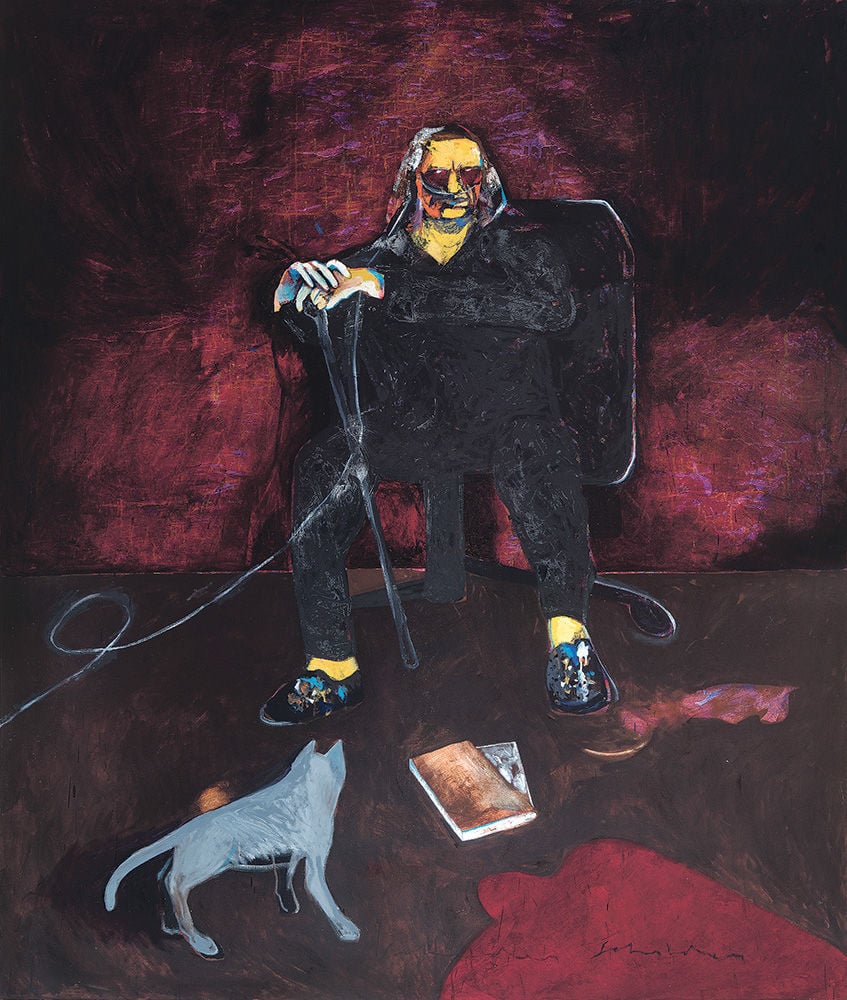 Fritz Scholder: Self Portrait With Grey Cat, 2003, acrylic on canvas 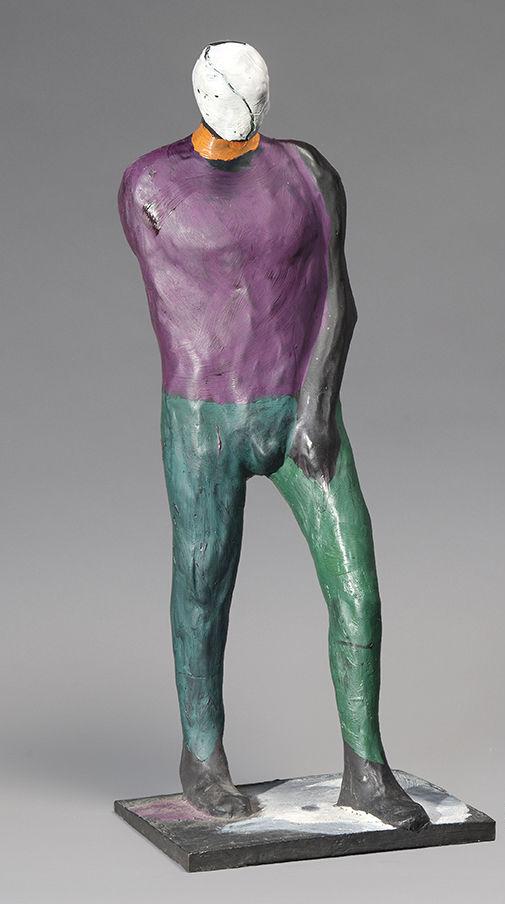 Fritz Scholder: Self Portrait With Grey Cat, 2003, acrylic on canvas

The 21st century has been kind to Fritz Scholder (1937-2005), with a major retrospective of his works at the Smithsonian’s National Museum of the American Indian in 2008 and a traveling show organized by the Denver Art Museum in 2015. He was inducted into the California Hall of Fame in 2009, and one of his sculptures even turned up in Darren Aronofsky’s 2010 film Black Swan. The show at the National Museum of the American Indian was called Indian/Not Indian, referencing the uneasy relationship that Scholder, who was one-quarter Luiseño, had to the term.

“He tried in his lifetime to shed the association,” said Romona Scholder, the artist’s second wife. “By painting the Indian series he locked himself into belonging to a certain genre and to a certain group of people. To break out of that — he felt he never did. He always wanted to be a Bruce Naumann or a Susan Rothenberg.” Selections from Romona Scholder’s private collection of the artist’s works, along with pieces from the collection of the Fritz Scholder Estate and the Fritz and Lisa Scholder Collection (belonging to his third wife), are on view in the exhibit Figures of Paradox at LewAllen Galleries. Outside of major retrospectives, the artwork at LewAllen, which includes large-scale paintings, prints, and sculpture, has rarely been seen or exhibited.

A fair number of self-portraits by Scholder suggest that the biggest contradiction was in how he saw himself. For better or for worse, the label “Indian artist” is still associated with him. But Scholder didn’t just paint Indians. In fact, he mostly didn’t, except during two periods. Influenced by Native students at the Institute of American Indian Arts, where he taught early in the school’s history, he took on the subject of Native peoples in a truthful way. Many of his works were simply portraits of regular people from photographs he took as he encountered them, and they challenged stereotypical views of Native peoples and outmoded, idealized depictions in art, presenting a contemporary perspective. But that view, too, was full of conundrums. Sometimes, as in the 1990 painting Summer Afternoon Clouds, which is in the LewAllen exhibit, he depicts aspects of Native traditions such as dances or people in ceremonial dress. But Scholder placed his subjects in the now. His subjects were likely to sport some emblem of contemporary society that could seem incongruous with more traditional Native aspects of the portrait, such as a headdress or a feather held in the hand. In these juxtapositions, Scholder demystified his subjects and made them real. There isn’t anything special-seeming about the man in his Indian and Store Front from 1974, but in a sense, his normalcy is what makes it a singular portrait. “It was from something called the Gallup series,” Romona Scholder said of the painting from her collection. “He was down in Gallup and he photographed all kinds of people and then did the paintings from that.”

In terms of his painting style, he made figurative works that tend toward abstraction, and adapted a flat Pop aesthetic in his lithographs and aquatints, a number of which are included in Figures of Paradox. Among them are Fancy Dancer and Indian Portrait in Roma, both from 1978. The aquatint etchings were made when Scholder was visiting Rome. He traveled extensively, studying the occult and Egyptology as well as art history. After about 1980, he abandoned Native subjects and wouldn’t return to them for a decade. The show includes 1980’s Indian Land, among the last of his Native paintings to be exhibited when he was being represented by Elaine Horwitch. In the 1990s, however, Scholder took up Indian subjects again. “He said he had more to say,” Romona Scholder said.

The paintings in Figures of Paradox are enigmatic. Cat Mask from 1984 and Alone #2 from 2001 portray figures that are demonlike in appearance but bear a little-discussed aspect that can be seen in many of the figures he painted — a jutting shoulder, suggesting that these dark figures may be self-portraits. In his polychrome bronze sculptures, too, the left shoulder predominates, while the right arm seems to vanish entirely. “Fritz was born with scoliosis,” Romona Scholder said. “All of these pieces, if you look, he really does that shoulder thing over and over. I never talked about it with him, but I think it’s a result of his uneven shoulder, his need to pad one side of his jacket to make sure his shoulders were even. And of course his last name was Scholder.”

Two portraits of Scholder by Andy Warhol are in-cluded in the show. The two images, from 1980, sat for many years atop a bookshelf in Scholder’s personal library. “We had the best time when they were done, going to New York,” said Romona Scholder, who was married to Scholder at the time, although the paintings are in Lisa Scholder’s collection. “There was a man named Edmund Gaultney, and Edmund used to be out here and managed galleries, and then he went back to New York to work for Andy. He’s the one that put Andy and Fritz together. We went out a couple of nights with Andy Warhol and Diana Vreeland, and it was so much fun being around them, being around a person you know you’ll never talk to again in your life. That’s when Andy took the photographs of Fritz.”

Among the most compelling aspect of Figures of Paradox are Scholder’s self-portraits. He made at least one every year. Self Portrait With Grey Cat, from 2003, is about as honest a portrait as you can expect. Scholder was on oxygen at the time, and he depicts himself seated, his hands resting on a cane, the tube connected to the oxygen affixed to his nostrils. Nevertheless, Scholder remains a stoic, imposing figure, an aspect of the painting that is heightened by its sheer size (more than six feet in height). “That was in the area of the last of his paintings to be painted,” Romona Scholder said. “I think it’s one of the most powerful.” ◀