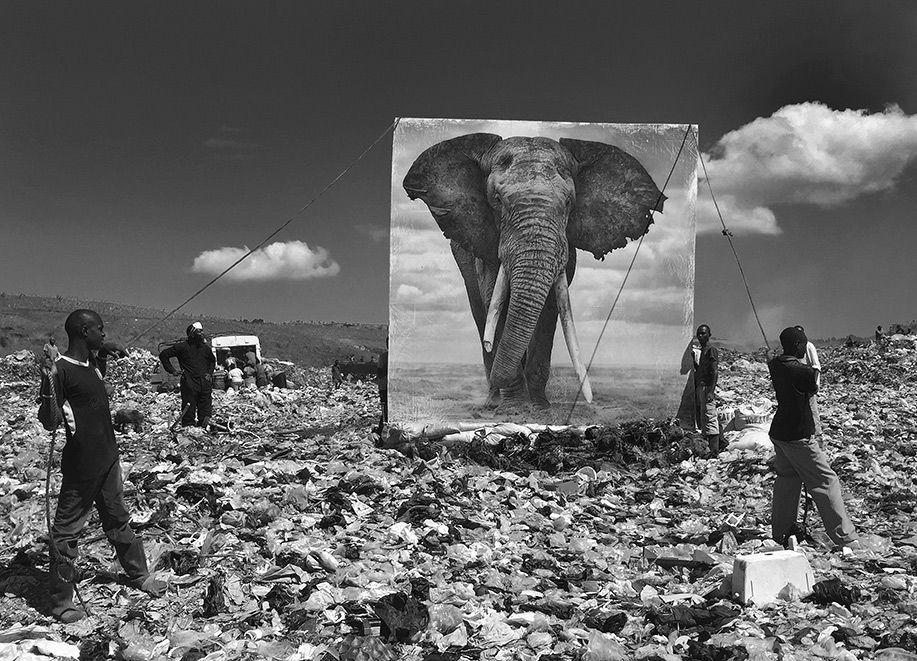 Nick Brandt: Behind the Scenes — Elephant panel being erected, 2015; courtesy the artist

Nick Brandt: Behind the Scenes — Elephant panel being erected, 2015; courtesy the artist

Nick Brandt’s portraits of African mammals, first published in 2005’s On This Earth: Photographs From East Africa, are astounding for their up-close clarity. But in 2014, the photographer, alarmed at the disappearance of animals because of development and poaching, decided to politicize his images. For his new monograph, Inherit the Dust (Edwynn Houk Editions), he fabricated huge panels featuring his photos of elephants, lions, zebras, giraffes, and other mammals; erected the panels at landfills, construction sites, underpasses, and quarries; and made a series of stunning panoramic photographs that contrast present-day wastelands with images of ghosts.

“It is increasingly difficult to find places in East Africa where the animals still roam,” he said in an interview from his home in California’s Santa Monica Mountains. “I think a lot of people have a somewhat overly romantic view of what Africa is like that I think is about 30 years or more out of date. There are so many BBC, National Geographic, Discovery Channel documentaries — and I’m somewhat guilty of this myself — that give the impression of this place of extraordinary natural wonder and a plenitude of animals. Even as a pessimist, I have been shocked at the speed that the devastation has occurred over the last 10 years.”

The new photographs are different from his earlier images in another way: Humans are shown. The panels were installed in places where people are working or rummaging for edible discards at dumps or living under overpasses. Most of the figures in his panoramas pay no attention to the giant photos of wild animals. “What I’m trying to convey is that the people who are living in these places are also victims of this environmental degradation. It hurts them, it hurts the planet, it hurts all of us. So in the photographs they’re effectively oblivious to the panels because it’s in the past. Those animals are long, long gone.”

Brandt was born in 1964 in London and studied painting and film at Saint Martin’s School of Art in that city. He is best known for his three-part book series: On This Earth, A Shadow Falls, and Across the Ravaged Land. Arguably his most dramatic photographs are the portraits he made of elephants, buffaloes, rhinos, and Africa’s big cats. Early on, he conceived of, and strove to achieve, a new perspective on such portrayals as he took the work into the realm of fine art. Some of the images look like fashion-magazine ads, but these are wild animals — at close range. “You wouldn’t use a 500mm lens from 500 feet away to make a portrait of a human being, so I’m not going to do that with an animal,” he told Pasatiempo in 2005.

In the Inherit the Dust portfolio (a selection of which shows at Photo-eye Gallery in Santa Fe from June 10 to July 23), some images that were not previously prioritized now become dynamically pithy in a new context. One example is an elephant group image that the photographer considered of secondary value, because the head of what is surely a cute baby elephant is hidden behind the legs of the central pachyderm. But when Brandt staged a giant print of this photo at a construction site, the calf “looks like he is cowering under his mother, hiding from the monumental trucks thundering by them,” he writes in one of the book’s essays.

In the new monograph, this is a gatefold image approximately 12 by 36 inches. He created these panoramics by digitally stitching together images from multiple film negatives. By these means, he presents what he described as “an enormous field of vision, more than what you could get with a panoramic camera.” In the case of those huge panels placed in urbanized locales, he could have constructed composite images in the comfort of home using Photoshop, but each photo he took — doing it the hard way — is enlivened by the element of unpredictability. “I could pick any panorama shoot in this book and happily mention something surprising that occurred in the final shot that made it better,” he writes.

For this series, as with the portrait series, he shot with a Mamiya RZ67, a medium-format film camera. He spoke about “the ridiculous lengths I’ve gone to” using film in the digital age. “It is incredibly impractical. However, digital doesn’t turn me on, and film does. I had some truly horrendous things happen where I’ve had to go back and reshoot. In spite of all that, I will continue for the foreseeable future — in black and white, certainly — to shoot film. If I was shooting color I would probably switch to digital, but I have no plans to shoot color.”

He probably didn’t plan to become a conservationist, but that is essentially what he’s doing with Inherit the Dust. In 2010, he established the Big Life Foundation with conservationist Richard Bonham to try to do something about the devastation of African wildlife. “Richard is a phenomenal leader, a general on the ground in relationships with community and government bodies, and this two-million-acre area [in Kenya and Tanzania] that we’re focusing on has seen a much-diminished incidence of poaching and general killing of animals, and that’s because of the support of the local communities. That is the only true way forward.”

Big Life employs 280 rangers and uses 15 vehicles to patrol 2 million acres of wilderness in the Amboseli-Tsavo ecosystem of East Africa. The rangers have made more than a thousand arrests and have confiscated more than 3,000 weapons and poaching tools. “The rangers are aided by their family members, and they are eyes on the ground alerting the rangers when they see unusual people around,” Brandt said. “And these animals are increasingly understood to be of value, just purely pragmatically and economically.”

The destruction of Africa’s large mammals is happening on several fronts, among them harvesting for bush meat, habitat loss through human expansion, and, perhaps most appalling, the demand from Asian countries for elephant and rhino ivory and lion organs. “Remember that only a few years ago, in studies done by Wild Aid, up to 80 percent of the Chinese population believed that tusks naturally fell off elephants and some nice little fellas came along and picked them up,” Brandt said. “Groups like Wild Aid are doing an amazing job trying to educate people, but there are far, far, far more people in Asia who are interested in owning a piece of ivory than there are elephants left on Earth. Of course, there are countless other animals that are murdered for parts of their bodies for ridiculous medicinal purposes. This new book deals with more than all that. It deals with us and the fact that there are too many of us and that we as a species are just smothering, suffocating the natural world.”

He and Bonham would like to expand the territory patrolled by Big Life, but he emphasized that they must be cautious. “We have to be very sensible and prudent about how we expand. One of the things I have learned watching other organizations is that you can do far more damage if you move into an area and start helping local communities and then you abandon them. You’ve created employment and hope, and then you just go, ‘Sorry, we’ve run out of money,’ and you vanish.”

Brandt is not sure what he will do next as a photographer, but he doesn’t plan to forget about this crisis. “I do consider it my lifelong mission to highlight and catalog what we are doing to the natural world and to the animals of this planet,” he said.

Will he do more of those amazing portraits of African animals? “No. I’m done with that,” he said. “It’s all over, finished with. That was that period of my life. Now I’m doing this work, and the next body of work will be something different again.” ◀

This new book … deals with us and the fact that there are too many of us and that we as a species are just smothering, suffocating the natural world. — Nick Brandt