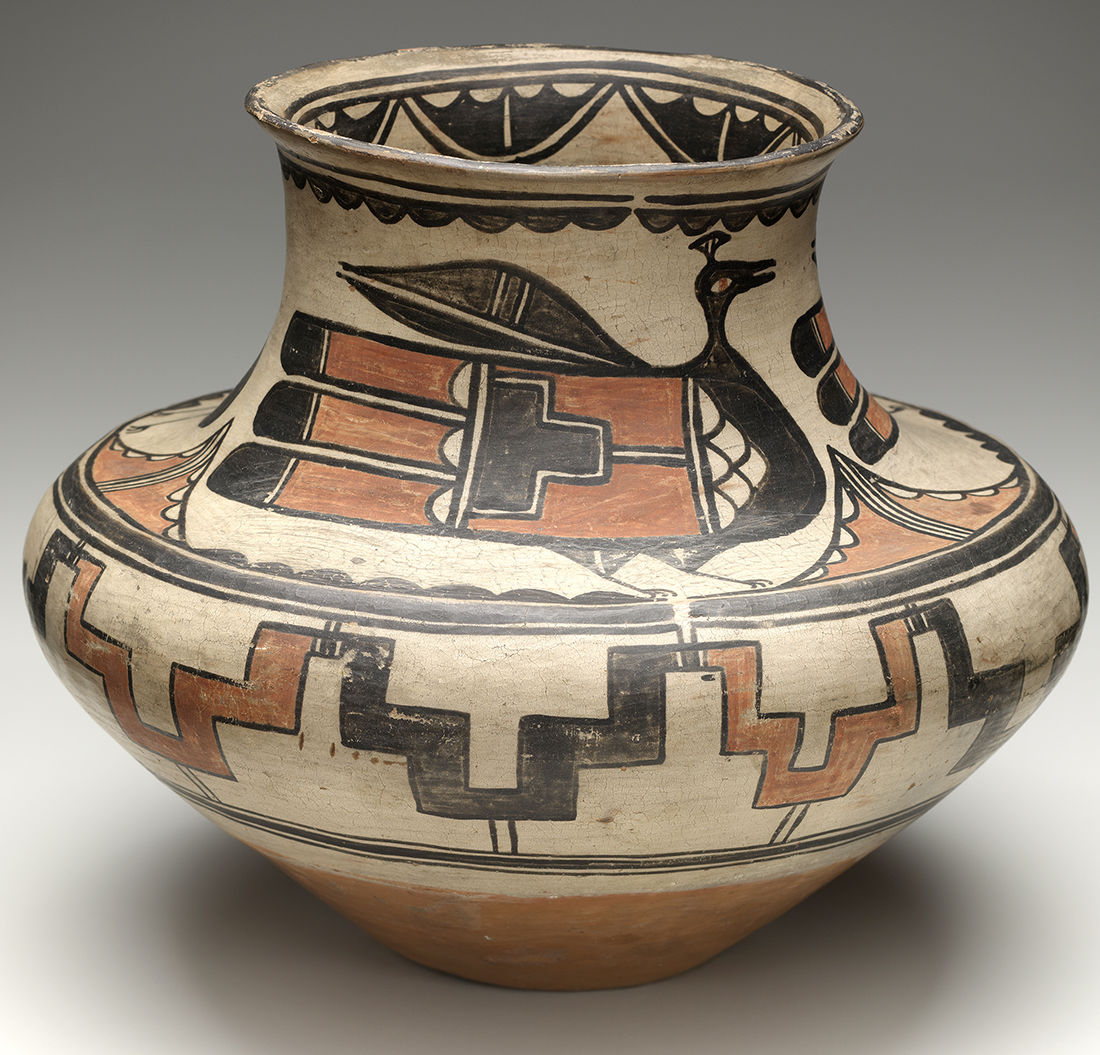 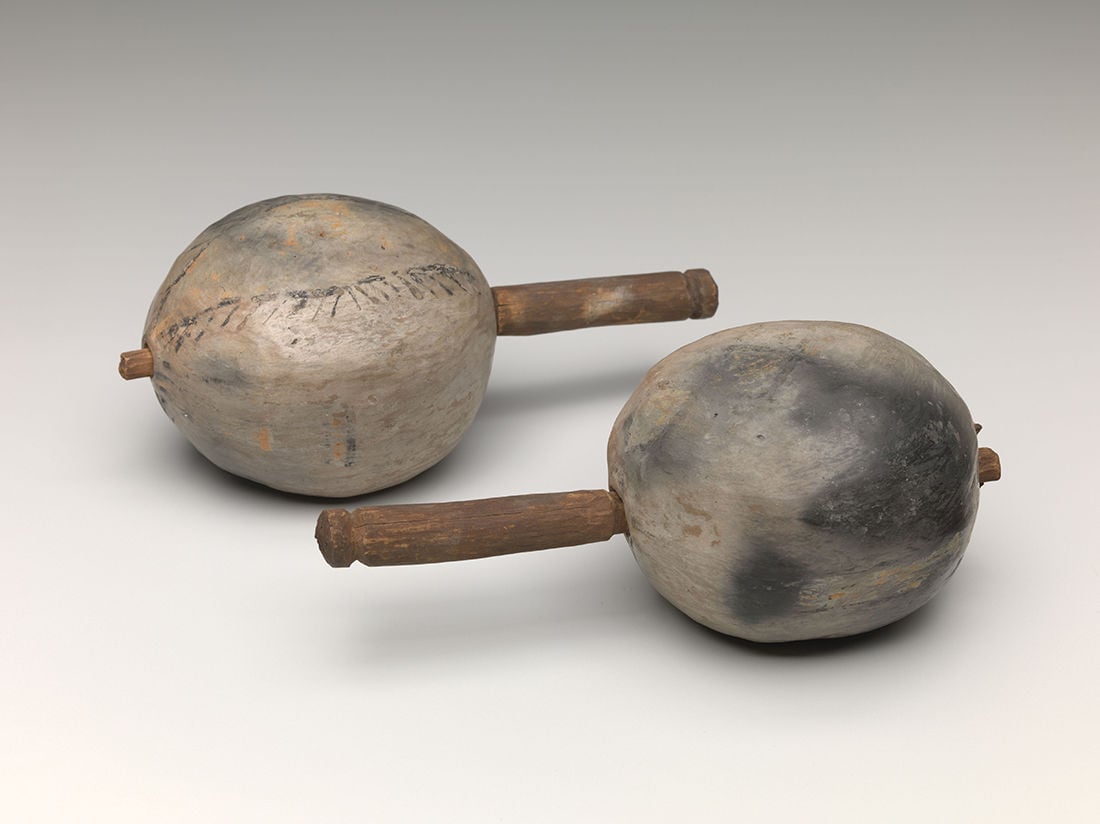 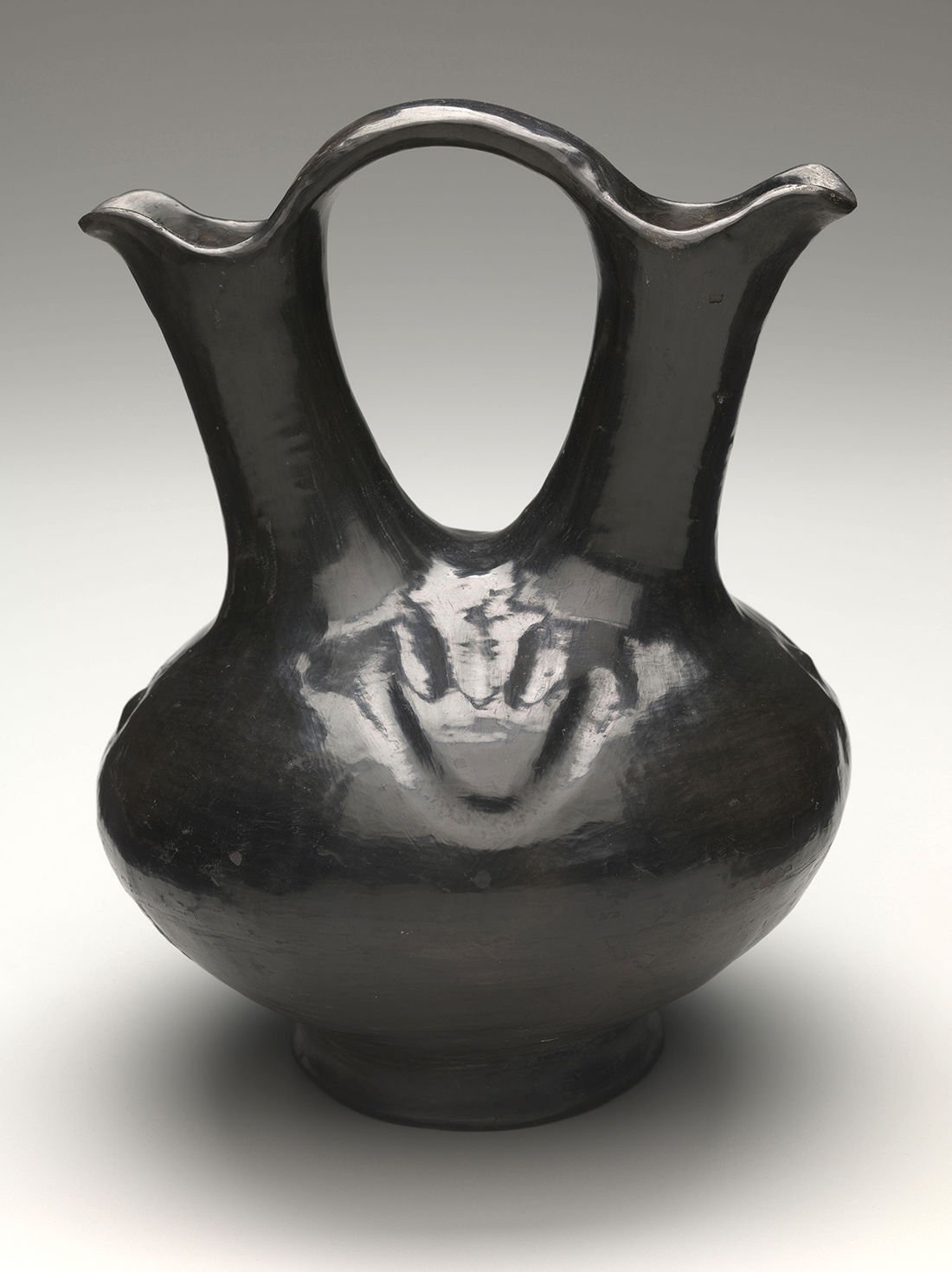 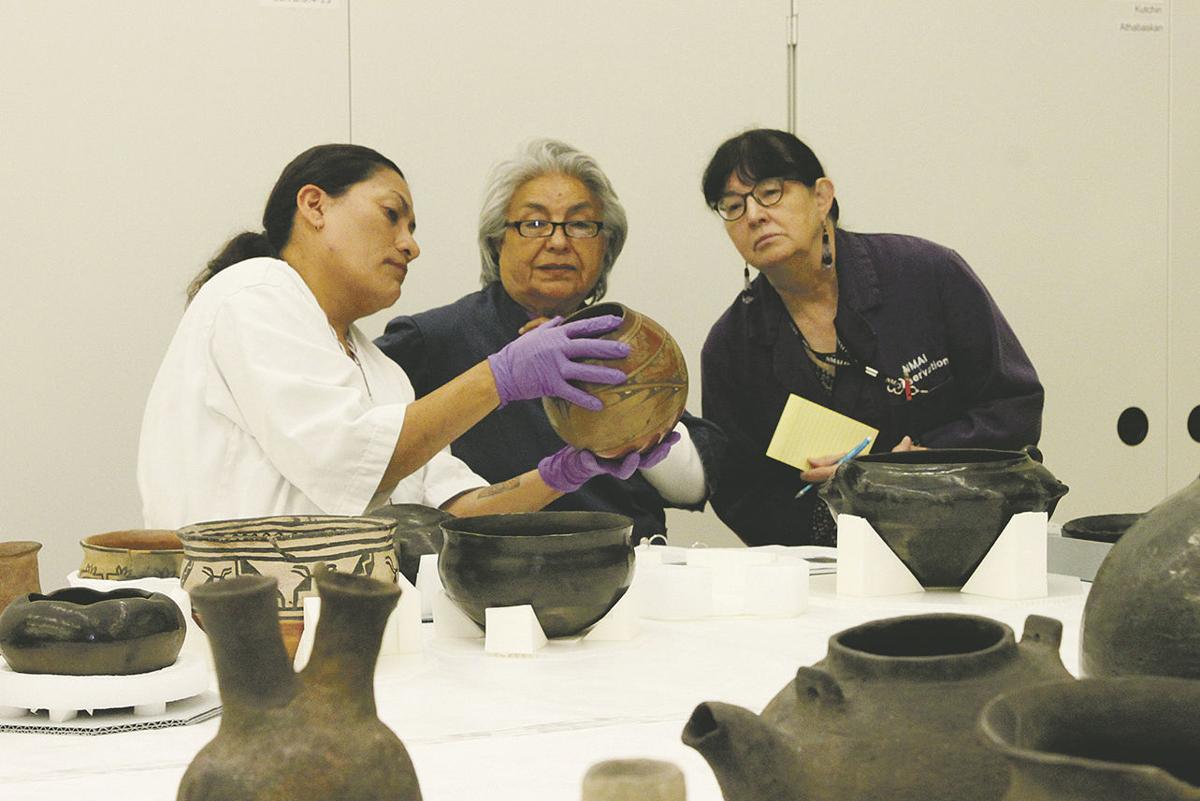 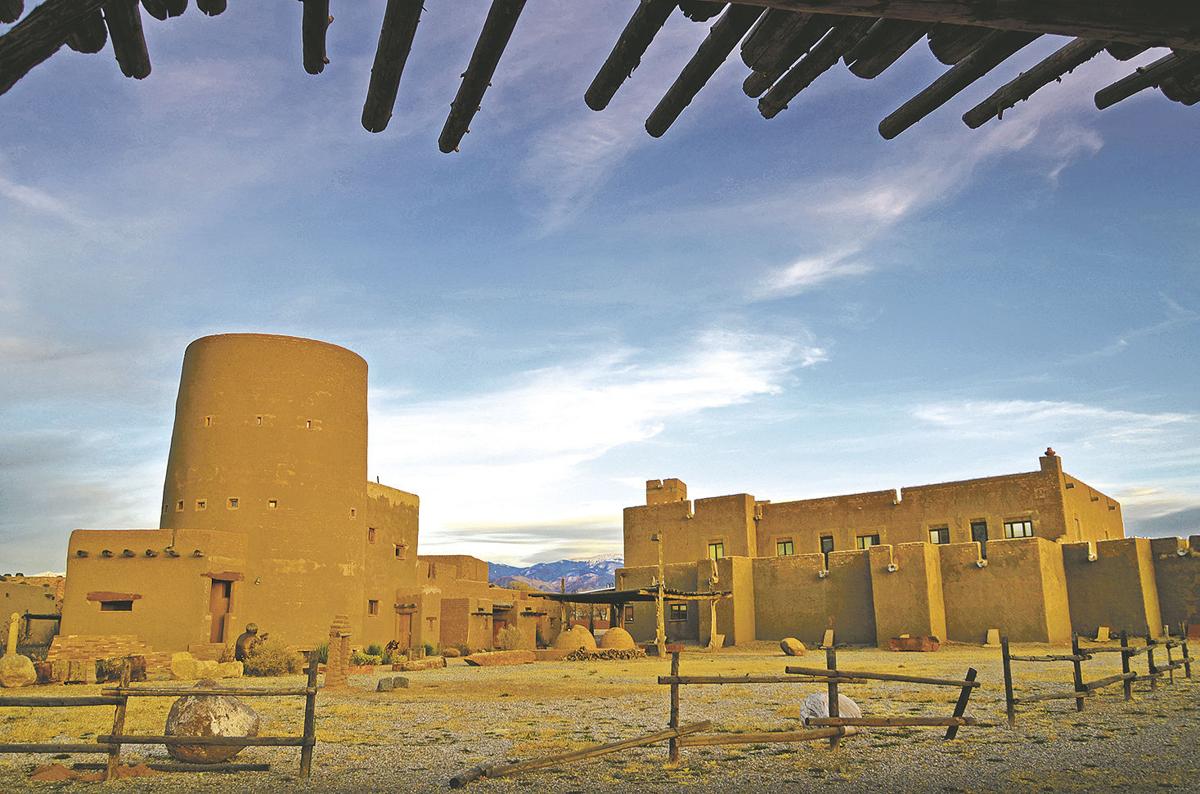 Emotions are high for potters and others at New Mexico’s six Tewa-speaking Pueblos. They’re celebrating the return of 100, century-old pots from the Smithsonian Institution, and the reunion is stirring deep feelings.

“It’s very spiritual for me, because they’re my great-grandparents, my great aunties, my great uncles, that are being brought back,” says Evonne Martinez of San Ildefonso Pueblo. “It’s very important because it’s our culture, it’s our spirit, it’s our wholeness, and it’s our heart.”

Martinez is shown in a video made for the exhibition Di Wae Powa: They Came Back, which opened Oct. 12 at the Poeh Cultural Center. The ongoing exhibit celebrates not only the return of the pottery but also a co-stewardship innovated by the Poeh Center and the Washington museum.

The 100 pots have returned to the place where they were made: the Tewa world. The vessels and other pottery forms were collected from potters at the six Tewa Pueblos — Nambé, Pojoaque, San Ildefonso, Ohkay Owingeh, Santa Clara, and Tesuque — in the late 19th and early 20th centuries.

The circumstances of their return are special, and not directly related to the 1990 Native American Graves Protection and Repatriation Act (NAGPRA). An abundance of items identified as having “cultural patrimony” value, as well as human remains and funerary and sacred objects, have been returned to descendant tribes under this act — but these pots are different.

“It’s kind of what was left after that, beyond NAGPRA,” says Karl Duncan (Arikara/Hidatsa/Mandan/San Carlos Apache), executive director of the Poeh Cultural Center at the Pueblo of Pojoaque. “They don’t fall under the terms of NAGPRA.”

Duncan says there are hundreds of pots and other materials “still out there,” so tribes are trying to find other ways to bring them back. One way is to create partnerships with institutions like the Smithsonian and its National Museum of the American Indian.

“They do loans to communities on a regular basis, but this is a very long-term loan, and as we continue down this road, we get more comfortable with the idea of it being an indefinite loan. It’s still the property of the Smithsonian, but we’re the stewards on-site,” Duncan says.

“The Smithsonian doesn’t have formal paperwork or even the terminology for what we both agree it should be, so that’s the next exciting step: What is this going to become?”

“We’re all really excited at NMAI about this,” says Cynthia Chavez Lamar, assistant director for collections at the National Museum of the American Indian, who was at the Poeh Center in late September. “It is our responsibility to provide access to these collections and especially if the community approaches us and wants to do something, we do everything we can to make that happen.”

NMAI is also currently working with the Makah Tribe in Neah Bay, Washington, and with the White Mountain Apache Tribe in Arizona on repatriations and long-term loans.

Chavez Lamar says the 100 pots were selected from a collection of several hundred at NMAI. That work started in 2016 and ended with the recent transportation of the pots. “It was a huge planning feat to have them all individually conserved,” Duncan says. “The mounts were custom-made for each pot. They came in 12 big crates on a semi truck. That was scary, knowing that they were moving across the country. Then they had to sit for four days to acclimate to this environment, compared to where they came from, the museum storage in Suitland, Maryland.”

The returned pottery items include wedding vases, water jars, and storage jars. Some of them are huge, weighing almost 50 pounds. There are also two clay gourds, a clay house structure, a pair of rattles, and Tesuque rain god figures. One of the criteria set by the Tewa Pottery Advisory Committee was that nothing would be more recently made than 1930, so the items would not have been influenced by the tourist market.

“We also don’t want anything signed,” Duncan adds. “We want the Tewa families to know that we were selecting a wide variety rather than things by certain families. And even though these don’t fall under NAGPRA, we wanted to make sure that they weren’t culturally sensitive. We want to make sure that the exhibit, this space, felt welcoming and comfortable to Tewa Pueblo visitors.”

Duncan and other committee members visited the Tewa Pueblos to invite them to be involved in Di Wae Powa. And it is hoped that many in those communities, as well as the general public, will visit the pots in the exhibition space. Some of the pots will be able to be handled and worked with, by appointment.

People will be able to study the pot shapes, materials, and designs for use in their own work. In the video about the show, Tony Chavarria (Santa Clara Pueblo), curator of ethnology at the Museum of Indian Arts & Culture, says, “It really can help remind people of the skill and talent and artistry of their ancestors.” Hopefully, he said, it will “inspire people to continue that work that their ancestors did long ago, to not let these cultural practices, like pottery making, just fall by the wayside or become very dormant, [so] that they’ll always have an active presence in the communities today and in the future.”

Duncan affirms that there is a goal to inspire the art of pottery-making. “We have pottery classes that we run here at the Poeh, and we’re hoping that our students will also use them and that elders will come in who might recognize the styles and say, ‘That’s our family style,’ and explain to youth why they did that form or that particular design.”

As more people see the collection, personal stories will come out. Some may be recorded in oral histories for the Poeh Center’s archives. “It’s kind of why we’re doing this, that it’s relevant right now and the stories will teach lessons [about] why you respect elders, why you respect water and the environment, why particular dances are being done or songs being sung,” Duncan says.

Other Tewa people who are featured in the exhibition video say their ancestors’ voices are in the pots. In an interview with Pasatiempo, Duncan said, “You’re taught that when you make a pot, the emotion and feeling and intention you have when you’re making it is going to stick with it, so all of these pots have the ancestors’ feelings and intentions in them.”   ◀

▼  Di Wae Powa: They Came Back

“All of these pots have the ancestors’ feelings and intentions in them.”