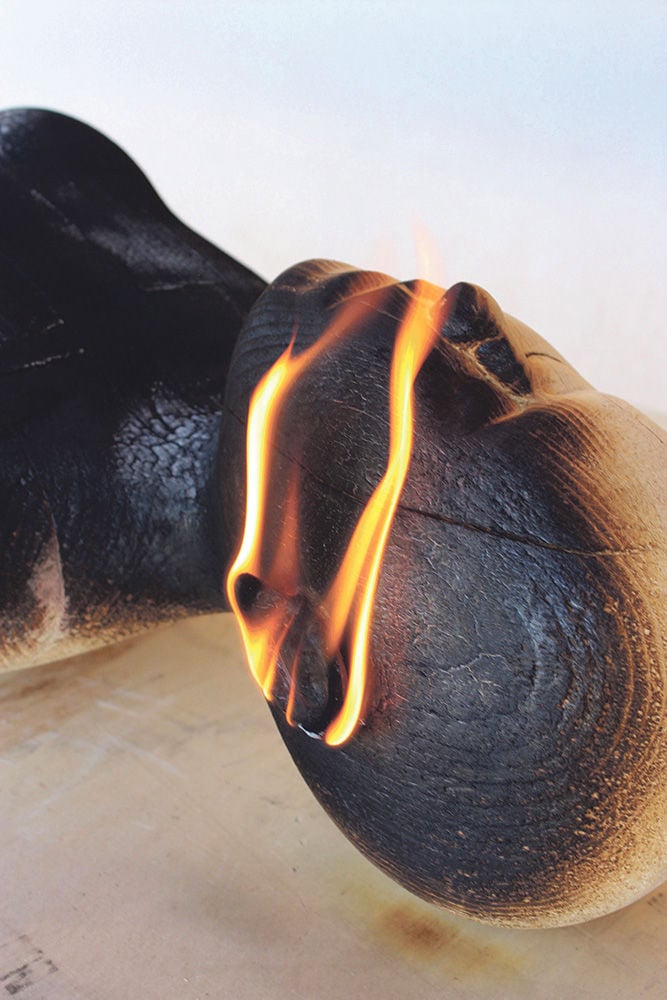 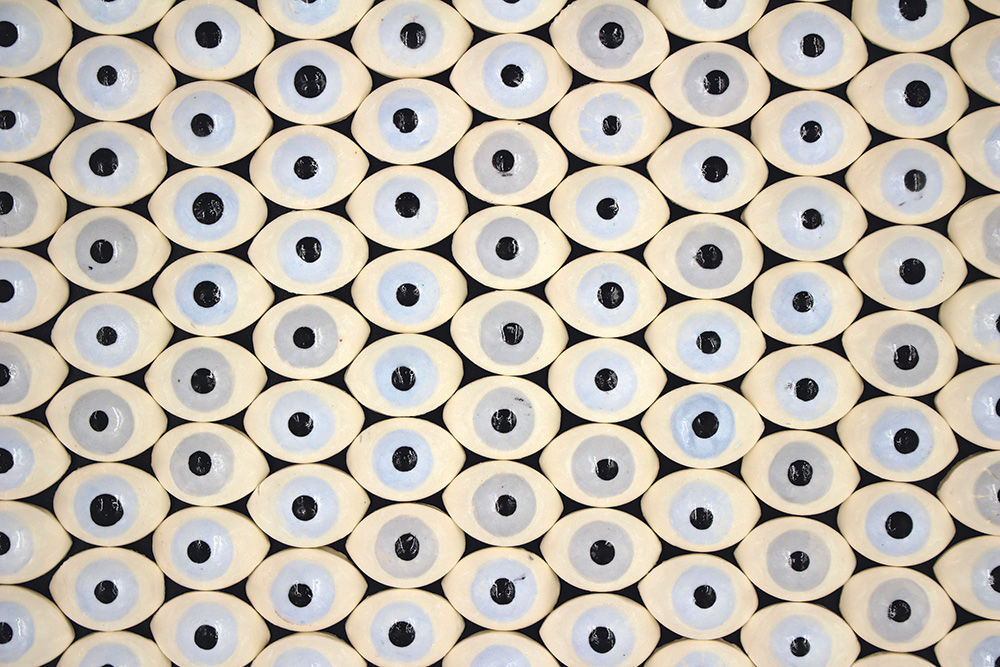 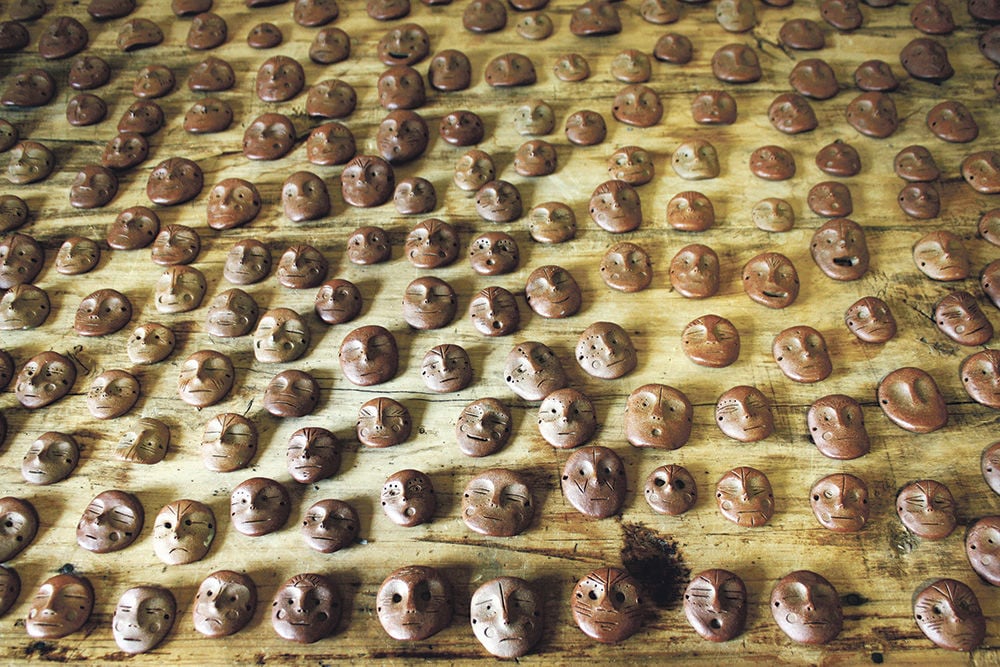 We all begin as a bundle of bones lost somewhere in a desert, a dismantled skeleton that lies under the sand. It is our work to recover the parts. — Clarissa Pinkola Estes, Women Who Run With the  Wolves

Feminist and universal, political and primitive, ancient and hyper-contemporary. Alchemical. These are just a handful of words that aptly describe artist Thais Mather’s exhibition Reckless Abandon, now on view at Form & Concept. Though the entirety of the gallery’s cavernous downstairs is filled with her work, the art’s intentionality never seems compromised by its quantity. During a recent tour of the show, Mather said, “I want to make art that will last. It feels really important to me to have the discipline to make things that endure.”

Comprising sculpture, drawing, video art, printmaking, and more, Reckless Abandon could feel sprawling, but instead it’s immersive and intimate. Describing a central theme for the show, Mather wrote in her artist statement, “I’m really contemplating humanity: how culture began, where we are now, and where that might evolve.”

Mather was born and raised in Santa Fe. She graduated from the University of Montana in 2006 with a degree in printmaking, then received an MFA in installation art and feminist theory from the Vermont College of Fine Arts in 2011; she returned to Santa Fe in 2013. Partially of Greek descent, Mather said she has long been fascinated by ancient artwork, in particular Cycladic figures: carved female forms from the Aegean region that predate the common era by thousands of years, and whose purpose is still not fully understood. With regard to the show, Mather said, “I was thinking about classical depictions of women, of goddesses, and that led to a fascination with how the sacred feminine transformed into something that became feared and even vilified.”

Though she mentioned being creatively influenced by the multi- disciplinary Austrian artist Valie Export, inspiration for this exhibit came not from an artist but an author. Feminist scholar Silvia Federici’s 1998 book Caliban and the Witch, which describes European witch hunts as campaigns to terrorize and thereby subjugate women within a modernizing world, is hugely important to Mather. Between the 16th and 18th centuries, an estimated 200,000 women were killed in the Western world, often by burning. “It’s a book everyone should read,” Mather said, pointing out that accounts of witch hunts have mostly been relayed by men. One of Mather’s most striking installations is named 200,000,a reference to these deaths. Rows and rows of small clay masks — there are a thousand in total, each hand-formed and carved by the artist — cover a low, flat board. Some grin, others grimace; as individual works they’re charming, but taken altogether, they’re assertive and strangely commanding.

The life-sized sculpture Mine and Thine occupies a bright gallery wing facing Guadalupe Street. A petite female figure rests on a black table, flat on her back, with slim arms at her sides and feet pointing upwards. Working in collaboration with New Mexico-based wood carver Paul Lutonsky, Mather made detailed drawings of a female form, which Lutonsky fashioned in wood. Then Mather took a torch to the carved figure, charring it to a sooty black. Sobering and spellbinding, Mine and Thine feels loaded with humanity, and oddly alive.

Like some sort of a mystical temple well, a wide, shallow bowl of water rests on a platform in the center of a pitch-black room at the gallery’s center. Projected onto its glossy surface is a looped four-minute video of a circle of burning wood. There’s something hypnotic about watching the strong flames slowly die, then start back up again. “I watched the recent eclipse using a bowl of water, which inspired this piece,” Mather said. “At the same time, I wanted to explore the elements, in this case juxtaposing fire with water.” With this video installation, the artist seems to imagine fire as a cleansing agent rather than as a destructive one. It’s an aesthetically and intellectually stimulating counterpart to the charred female form around the corner.

In a strictly visual sense, the most unifying thing about Reckless Abandon is its earthy palette. There’s very little color, bold or otherwise, which creates a meditative mood. Tan-and-black woodblock prints, either framed and hung or loose and suspended from the ceiling, adorn the gallery’s main exhibition space. They’re tonally subdued — elegant and understated, evincing a midcentury appeal. The print series is called The Total Other, comprising coiled octopi, intertwined snakes, and tarantulas — creatures that can provoke apprehension and fear. Mather said their “otherness” is an ideal representation of how something can be misunderstood — even despised — for being different. Against one wall, a dreamily smudgy watercolor of a female form contains a sharply contrasting, meticulously pointillist drawing of an uncoiling snake at its center, a cunning look at how the eternally mysterious internal power of a woman might be perceived as dangerous if unleashed.

Mather’s practice hinges on a high level of productivity. “The physicality of the show has been challenging,” Mather said. “The raw effort of bringing the work into the world has been immense.” As if to punctuate this remark, Mather pointed out a nearby display of thousands of tiny ceramic eyes, each around the size of an almond. The eye, of course, is crucial to the artist, and equally crucial to the way she’s interpreted by her audience, but it is also a signifier of figurative or symbolic vision, that which is unfathomable. “I’m not religious at all, but I have become fascinated with myths and stories, and with magical realism.” Every single one of the eyes — there are 2,500 in all — was slip cast and hand-painted. “I started to incise little lines in them, to mimic the striated look of an iris,” Mather said, before adding with a laugh, “but that was too much, even for me.”

Mather is transparent about relying on the knowledge and help of others in making this show a reality. Friends and peers, including local artists Sandra Wang, Ron Pokrasso, and Chris Collins, were instrumental in helping Mather learn and execute new techniques. This must partially inform why she doesn’t like what she has called the “farce of the solo show.” For her, the experience of art — whether making it or viewing it — is most rewarding when it’s collaborative in nature.

Mather performs in the exhibit with a number of feminist artists 5 p.m. Dec. 15;  $5-10 sliding scale admission; RSVP on Facebook