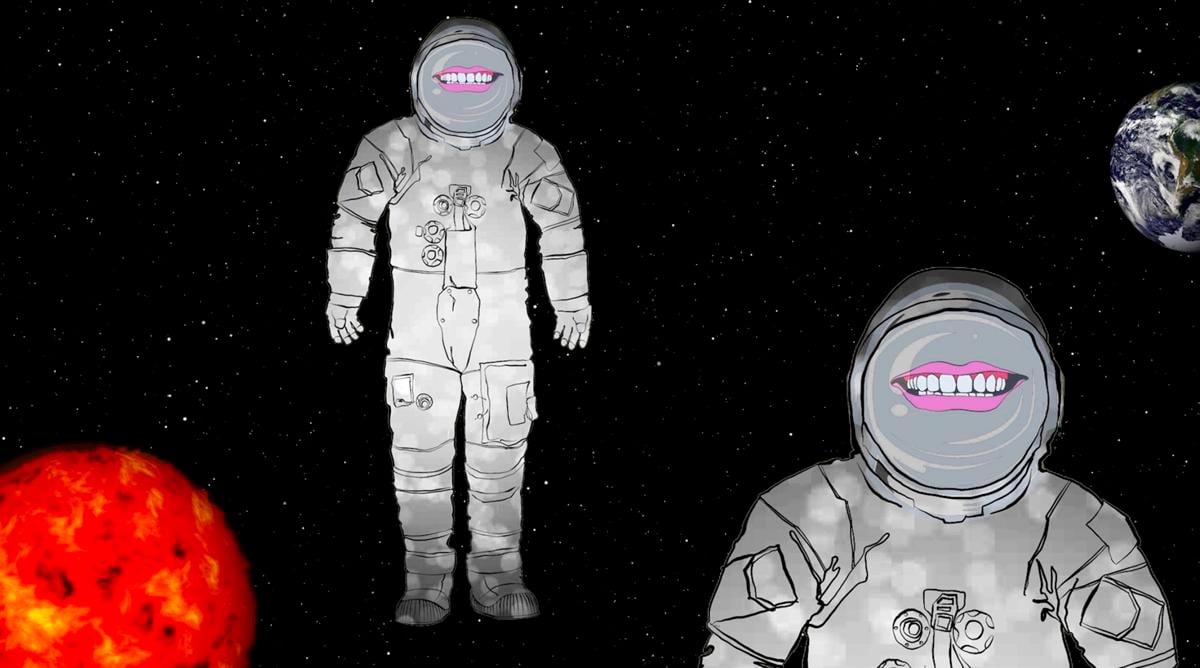 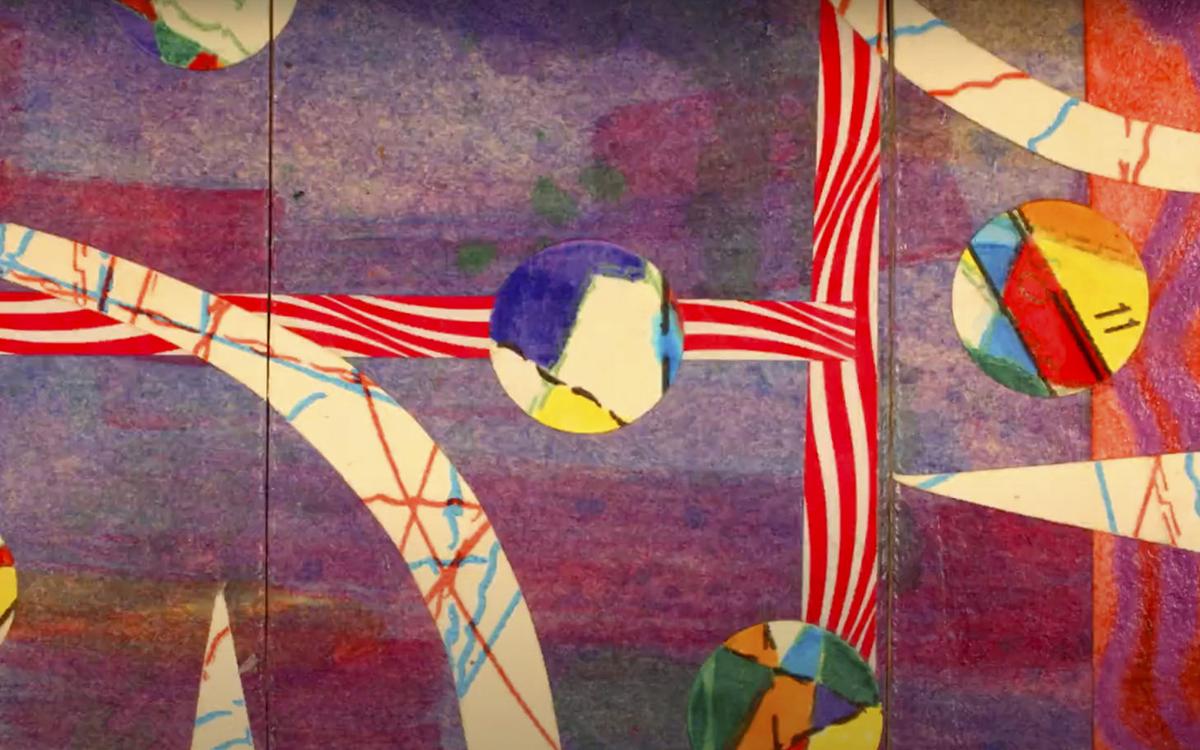 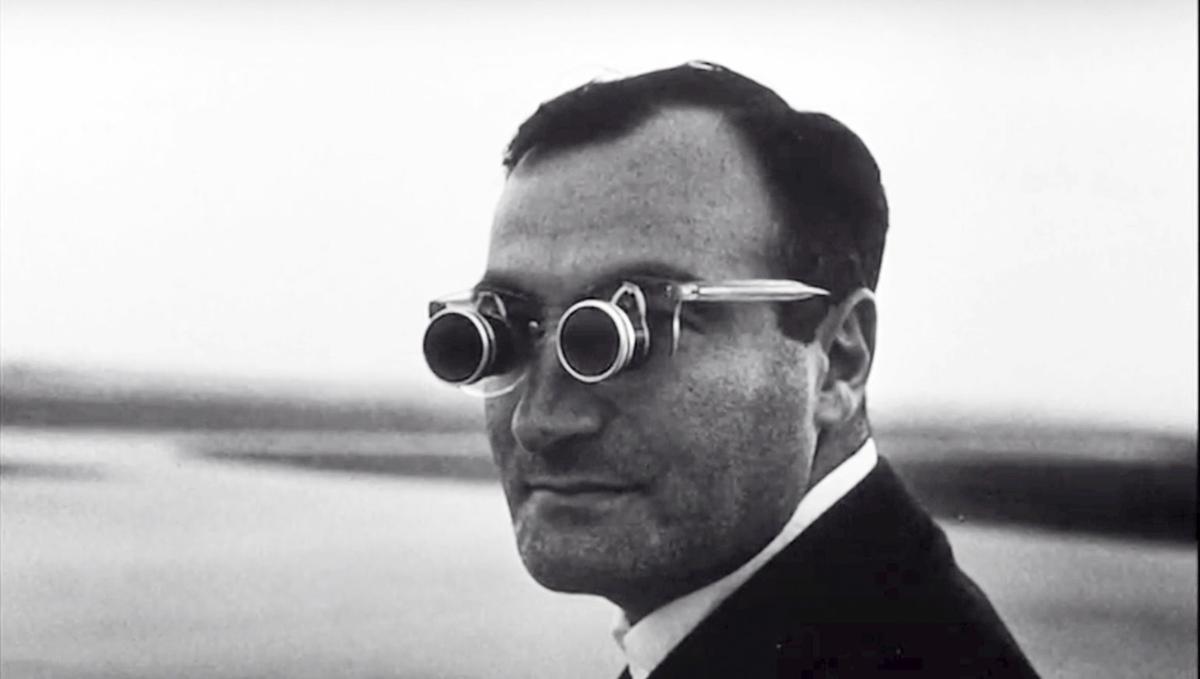 Chris Marker in a still from La Jetée (1962), which is featured in the exhibit Cut Up or Shut Up!

Chris Marker in a still from La Jetée (1962), which is featured in the exhibit Cut Up or Shut Up!

“One morning, the tigers came in while we were eating breakfast,” says the narrator of artist Laurie O’Brien’s collage animation Arithmetic (2011). “Before my father could grab a weapon, they killed him.” After killing his mother too, the tigers reassure the boy that they won’t harm him because they don’t hurt children. They offer to tell him a story. He asks them to help him with his arithmetic instead.

At just under four minutes, the animation plays out with surreal imagery to match its absurd narrative. Paper tigers flash across the screen. Melons fall into a meat grinder that churns out numbers, and a house appears against a great wall of flame. The animation, from a segment of author Richard Brautigan’s postmodern 1968 novel In Watermelon Sugar, is an unsettling, dreamlike barrage of images.

Suzanne Sbarge, executive director of 516 Arts in Albuquerque, first met O’Brien in New Orleans in 2018 at KolajFest, a conference produced by Kolaj Magazine. She remembered the collage animator when thinking about what kind of programming she could offer to viewers who are self-isolating at home. “She conveyed that collage animation is an accessible medium that can be learned quickly and done at home on a smartphone, without a lot of equipment,” Sbarge says. “I thought collage animation would offer an inspiring experience for both viewers and artists who want to learn how to do it. It’s low-tech and has an immediacy that feels fresh and fun, and we all need some fun right now.”

O’Brien is one of 12 artists in Collage in Motion, one of two shows that are part of 516’s new virtual exhibition series Museum at Home. The second exhibition, Cut Up or Shut Up! presents 10 animations that span the history of the medium. The shows are accessible from the museum’s website (516arts.org) through the summer.

Traditionally, collage animations are animated graphics layered over film footage. Think of filmmaker Terry Gilliam’s opening credits for the British television comedy series Monty Python’s Flying Circus. Collage animation has been in use since the early days of cinema and experimental film. But today, it can be done digitally. For example, Paloma Trecka’s 70-second Camina Camena (2020) was shot using a stop-motion iPhone app.

The animations were made using many of the elements that go into a two-dimensional collage, such as paper cut-outs, photographs, paintings, and drawings. Some of them, like Arithmetic, are narrative shorts, and others, like Lisa Barcy’s four-minute animation Forêt (2019), are more abstract.

Set to the rhythmic music of Malian mulit- instrumentalist Luka Guindo, Forêt is a color-filled series of animated dots, circles, lines, and squares sequenced into a hypnotic composition of frenetic motion. Barcy, who teaches animation at DePaul University in Chicago and curated the exhibit for 516 Arts, is an award-winning independent filmmaker. She made Forêt using 64 two- and three-inch abstract collage forms. Barcy and Trecka lead a three-hour online workshop on how to create collage animations, hosted by 516 Arts, at noon on June 13 ($25 or $15 for members of 516 Arts).

Collage animation is a unique visual form because it uses the static imagery of cut-outs rather than live action. The components can be juxtaposed and given motion by moving the camera or physically manipulating them and shooting the configurations frame by frame. Much collage animation lacks the fluidity of traditional animations. Just check out the water slopping from the buckets of Mickey Mouse as he labors for the sorcerer in Disney’s Fantasia. But collage animations have their own kind of playful dynamism. In Jo Dery’s seven-minute, 16-millimeter film, Echoes of Bats and Men (2005), for instance, paper cut-outs in the shapes of puffs of smoke rise from a factory chimney, becoming more numerous as they blot out the sky. Dery likely moved the puffs slightly, then shot a frame, moved them a little more, then shot another frame, and so on, which resulted in a staccato motion effect.

“Collage is an art medium that excels at bringing different parts together to create new forms and new ways of thinking,” says Sbarge, who makes art on a foundation of collage. “As our minds struggle to process the current dramatic changes in the world, what better time to question assumptions, deconstruct, reconfigure, and imagine alternative realities through collage art?”

Questioning assumptions is precisely what curator Bryan Konefsky had in mind when he put together Cut Up or Shut Up! Konefsky, who is the founder and director of the Albuquerque-based organization Basement Films, takes a more fluid approach to what constitutes collage. For instance, Konefsky included Wago Kreider’s eight-minute short The Vanishing American (2018), which is based on the artist’s use of collaged sounds rather than imagery. Against a backdrop of cars and campers moving through the iconic landscape of Monument Valley, Kreider overlapped snippets of music and dialogue from dozens of westerns and other films shot in the region throughout the 20th century.

Cuban documentary filmmaker Santiago Álvarez (1919-1998) turned to a collage-based format for his movies after the Cuban Revolution, when the U.S. embargoes left him bereft of resources. He was known for making films entirely from found footage — clips from Hollywood movies and still photographs. Konefsky chose Álvarez’s five-minute film NOW (1965), which is a powerful indictment of U.S. racism made only with photographs and newsreel footage and set to the music of singer Lena Horne. “Álvarez is famous for saying, ‘give me two still photographs and one piece of music, and I’ll give you a movie,’ ” Konefsky says. “This film reflects just how resource-deprived he was but how brilliant he was, in spite of those setbacks.”

While Cut Up or Shut Up! isn’t a chronological exposition of collage animation, it does contain work by early pioneers of cinema such as German filmmaker Lotte Reiniger (1899-1981), who was known for her silhouette animations. Her 1926 film The Adventures of Prince Achmed is among the oldest surviving feature-length animations, and it was included in SITE Santa Fe’s 2010 biennial, The Dissolve. For Cut Up or Shut Up! Konefsky chose her 13-minute animation Cinderella (1922). “What she would do is cut out black paper silhouettes of the different figures and the backgrounds and put them on a light table and photograph them frame by frame.”

It’s not so much that Collage in Motion and Cut Up or Shut Up! represent point and counterpoint in collage animation. Together, they honor the medium as a mainstay, but little celebrated, art form. From its foundation in film to its evolution into digital formats, collage animation showcases the hands-on approach artists use to make their work come alive. ◀

Collage in Motion and Cut Up or Shut Up!

Through August 31; online exhibitions through the summer (free)