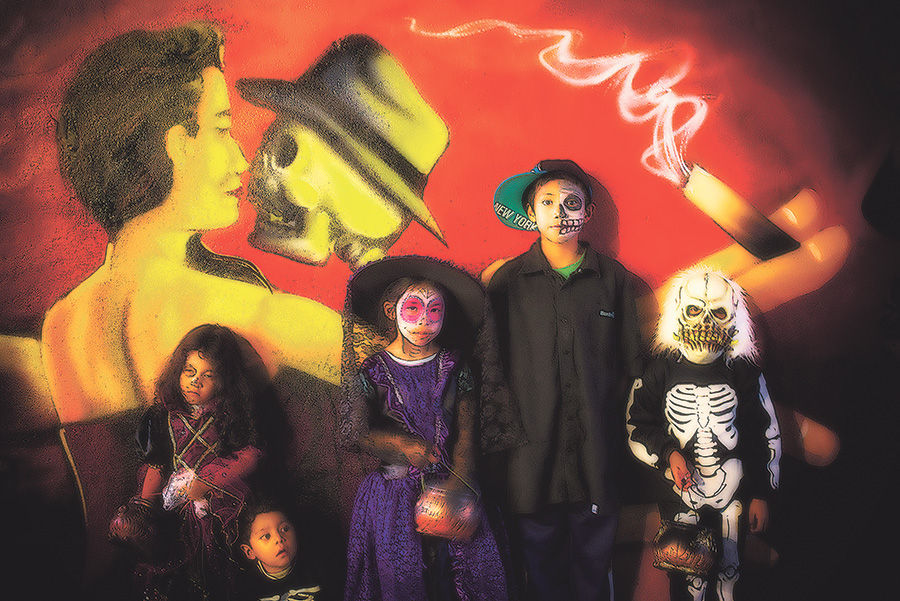 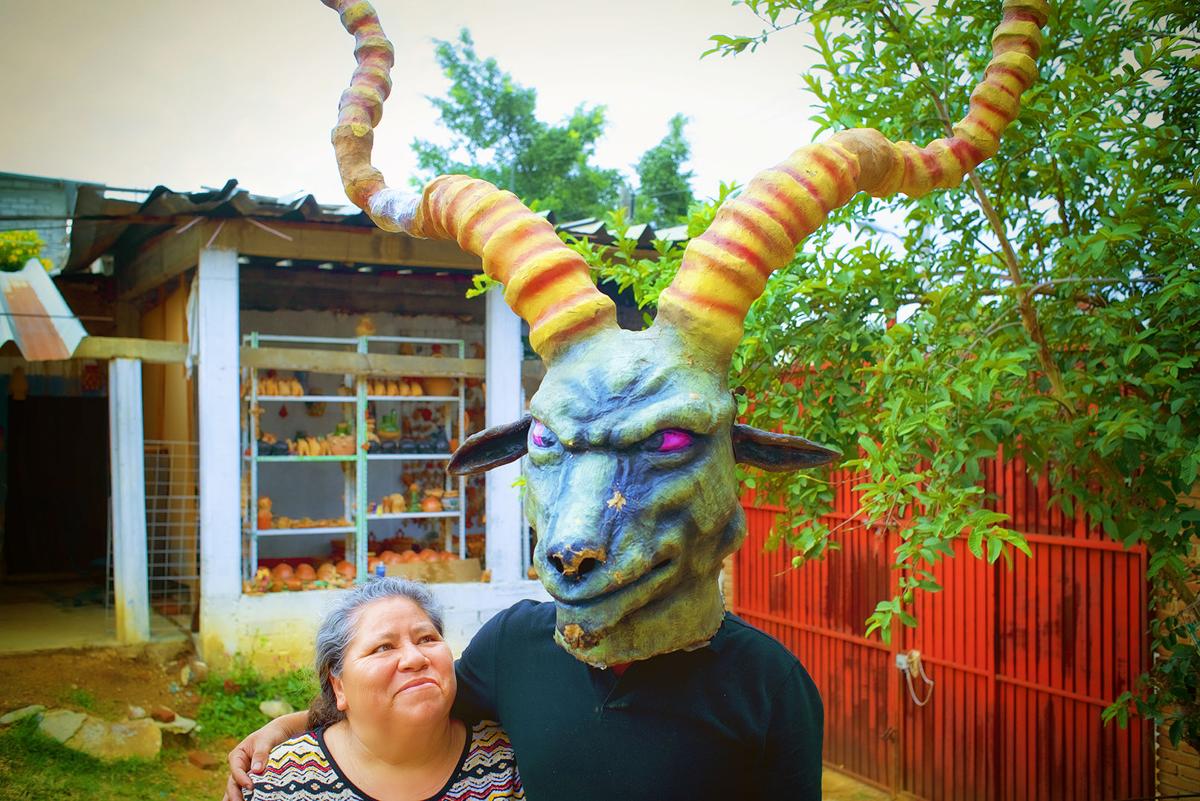 Unlike its American cousin Halloween, Mexico’s Día de los Muertos, which stretches over two days (Nov. 1 and 2), is more than celebratory; it’s ceremonial. And it’s more than an evening of mere scary fun; it’s an observance, a means of honoring the dead through prayer as well as a spirited commemoration.

Photographer William Frej, a part-time resident of Mexico and Santa Fe, documented Día de los Muertos processions in three areas of the country: Oaxaca, San Antonino, and San Agustín Etla. His striking images, awash in vibrant colors and rich in detail, capture the lively parades, creativity, and time that communities in these cities devote to fashioning wild and imaginative costumes. Frej is keenly aware of the contrasts inherent in Day of the Dead, whether it’s children with painted calavera (skull) faces, a “tree of life” candelabra decorated with skeletal Day of the Dead figures, or an ofrenda (shrine) to the dead ornamented with a dazzling display of marigolds, papel picado in a multitude of bright colors, burning candles, sugar skulls and other confections, and photographs of departed loved ones. Frej shot this body of work digitally, using in-camera effects to enhance the colors and light and give each image a luminous and paintlike appearance with little post-editing of the images. But his practice involves traditional darkroom work as well.

Visitors to Peters Projects are greeted by two large-scale black-and-white gelatin silver prints, part of an ongoing series that will soon culminate in a monograph on the topic of lost or forgotten temples and ritual spaces in remote locales, some of them in Mexico. But it’s clear why Frej, a black-and-white photographer, chose to shoot in color for the Día de los Muertos project: These compelling works, numbering around 30 images, capture the vibrancy of the events surrounding the annual festivals.

Día de los Muertos is not without its frightening aspects. The devil masks are sinister, and the angels — pallid figures in white — are often seen covered in blood. A host of characters are represented, including the various calacas, or skeletons, such as Catrina, a popular female skeleton dressed in an antiquated European dress and hat, often depicted carrying a bouquet, and characters from folklore such as La Llorona (the crying woman), a wandering phantom who weeps for her drowned children.

The presence of children at these events, playing designated roles, and Frej’s portraits of them convey a sense of the deeply ingrained Day of the Dead tradition. It’s a cultural phenomenon children grow up with. Frej seems drawn to the children time and again, their alert eyes and expressive faces visible beneath their white skull makeup. The ubiquitous shrines depicted throughout the exhibit, some in cemeteries, underscore the notion that, in a contemporary context, these events memorialize not just the dead but the disappeared as well. One such image, My Son, Lost in Chiapas, shows a mother by an ofrenda made in honor of her child.

With Halloween upon us, Día de los Muertos is a timely show. Granted, there are worlds of difference between the two holidays. Amid the elaborate masks, costumes, and faces painted to resemble devils, angels, and ghosts, many of which would not be out of place with trick-or-treaters in a U.S. city, lies the specter of the dead — the real dead. This aspect of the annual festivities, which may strike some as dark and somber, is not necessarily so. Frej, without need to explicate through written description, imbues his candid photographs with import, and each conveys an exciting but meaningful aspect of the Day of the Dead festivities. In other words, the exhibit is more a crash course than an extensive survey, but it deepens our appreciation for this cultural phenomenon while sparking our curiosity to learn more. ◀

William Frej, without need to explicate through written description, imbues his candid photographs with import, and each conveys an exciting but meaningful aspect of the Day of the Dead festivities.