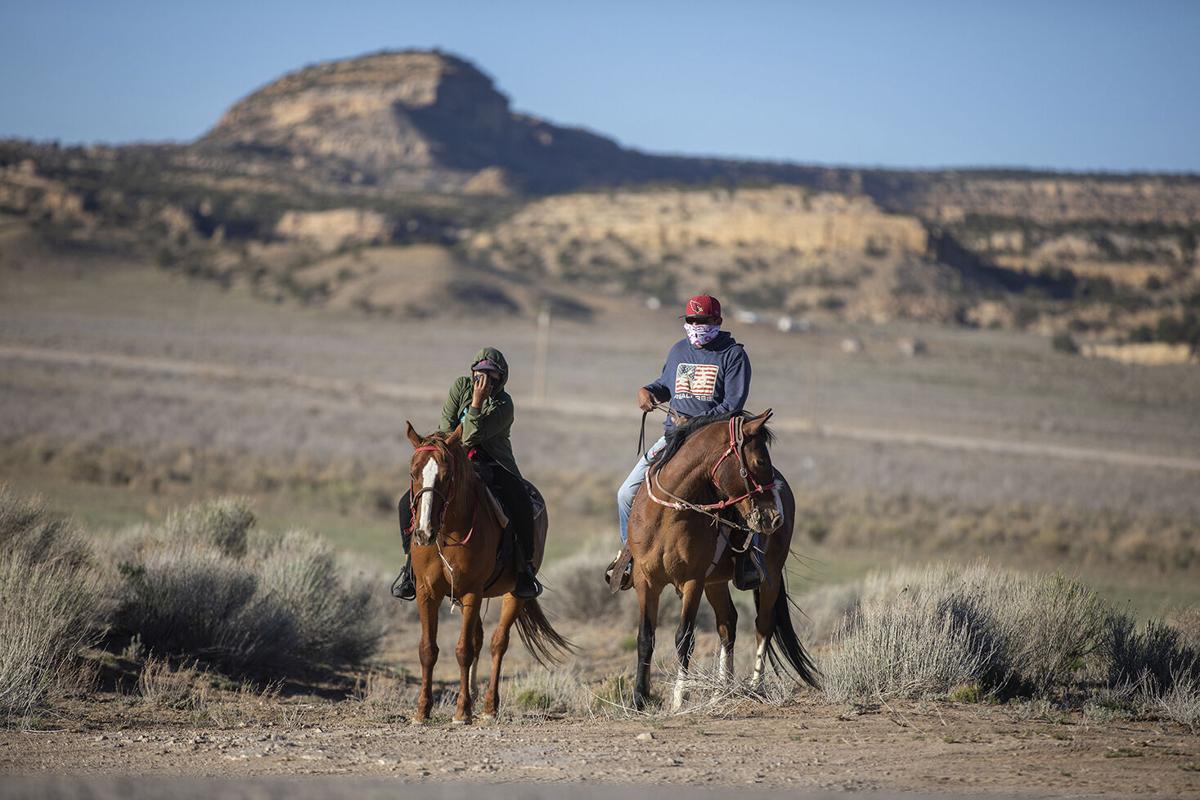 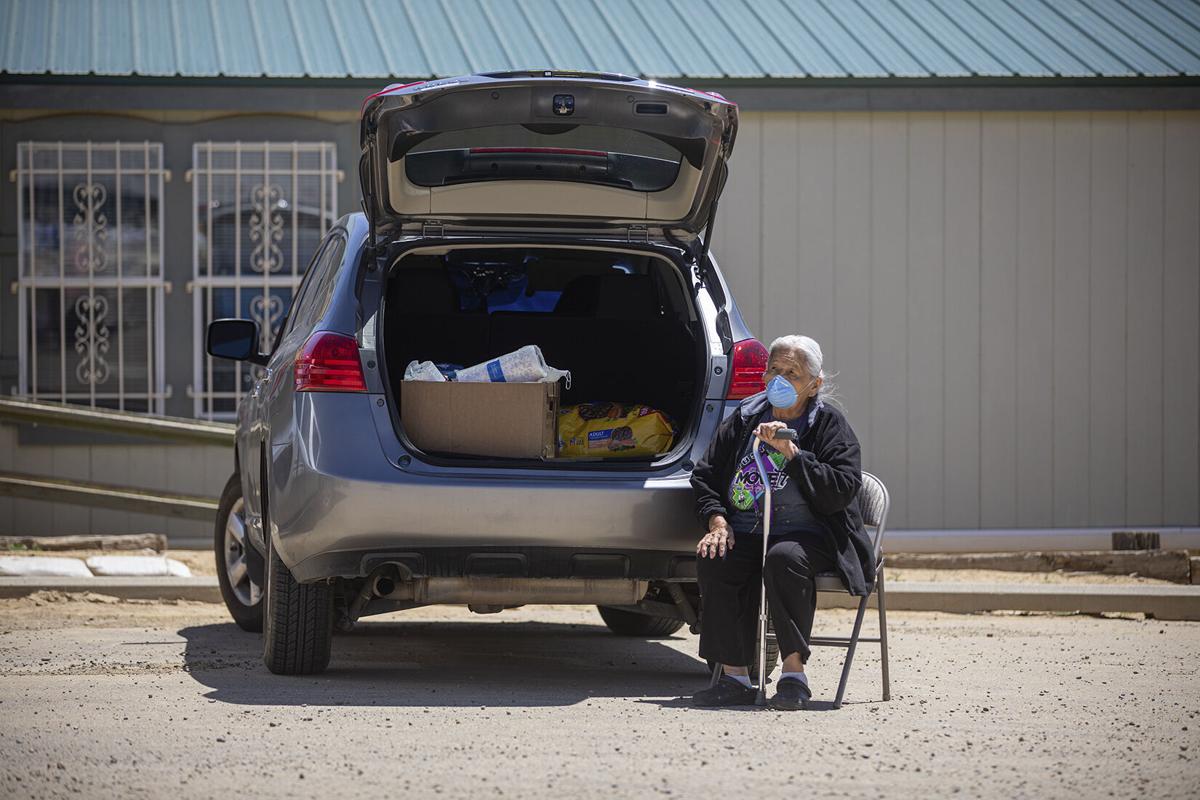 I ndian country has been hit particularly hard by the novel coronavirus, especially on the Navajo Nation. In May, reports published by major news outlets stated that infection rates on the nation’s largest Indigenous territory surpassed New York and New Jersey to become the highest per capita in America. For Sharon Chischilly, a journalism student at the University of New Mexico and a photographer at UNM’s New Mexico Daily Lobo, the devastating effects of the pandemic hit close to home.

“I heard a statement from someone that said that eventually everybody on the reservation would know someone who’s been tested positive,” Chischilly says. “I think it is true. My aunt got tested, and she was positive. On my boyfriend’s side, his cousin was tested positive, and his family just lost someone to the virus. He works on the reservation, and his boss passed away from the virus. I just feel like it’s closing in on me.”

Chischilly (pronounced CHIZ-chilly), who starts her junior year this fall, grew up on the Rez, close to the Arizona border in Manuelito, a small village along Old Route 66. When UNM’s campus closure sent all of its classes online, Chischilly returned home to be closer to her father. “We lost my mom to cancer when I was in high school,” she says. “I wanted to help him the best way that I can, which is buying him groceries when I can or even just doing his laundry so he doesn’t have to go out in public.”

Chischilly, who is Navajo, took the opportunity while on the Rez to address the Daily Lobo’s lack of coverage about what was happening on the Navajo Nation. She began publishing her articles in the university newspaper.

“When I started off, I just started going to every event that I came across,” she says. “For example, the Navajo Nation president distributing food to families. I started going to events where they would do testing. Also, elder shopping days. Bashas’ would open their store early for elders so they could get their supplies.”

Bashas’ Diné Market is one of only 13 full grocery stores in the Navajo Nation that serves a population of approximately 174,000 people (per the 2010 U.S. Census). An article published in December by Planet Forward, a project of George Washington University’s School of Media and Public Affairs, called the Navajo Nation a “food desert.”

A self starter, Chischilly set out (without a formal assignment) to cover an event in early May: the distribution of food to a chapter house in Crystal, New Mexico. Navajo Nation President Jonathan Nez was participating in the distribution. It was the week of May 11, and Chischilly was about to find herself in the right place at the right time.

“I decided to go and see if I could do another article for the Daily Lobo. I went over there and, when arriving, I noticed that he was talking to a reporter and I overheard the reporter introduce himself. I found out that he was with The Washington Post. I thought it was really exciting that there was a reporter from The Washington Post on the Navajo Nation, but I kind of forgot about it and just started photographing like I would normally do.”

When Post reporter Robert Klemko approached her, Chischilly thought he was going to interview her for the story he was working on. But Klemko had something else in mind.

“He asked me if they could use some of my photographs for his article,” she says. “He put me in contact with their photo editor. She texted me and wanted me to send her samples of my photographs. The next day, she called me and gave me my first assignment for The Washington Post.”

At 5 a.m. on May 14, Chischilly met Klemko in Window Rock, Arizona, for a grueling day of work. Nez and a caravan of assistants — Klemko and Chischilly in tow — set out from Window Rock early that morning, en route to Cameron, Arizona, 180 miles away. They made several stops at administrative and communal meeting places called chapter houses along the way. “I didn’t come home until 11 p.m. that night. It was a long day.”

The story, “Coronavirus has been devastating to the Navajo Nation, and help for a complex fight has been slow,” ran in the Post that Saturday, along with several photographs by Chischilly.

In one photograph, President Nez, in latex gloves and a face mask, is seen unloading bottles of water. In another, a long line of cars wait to receive food, water, and other supplies at the K’ai’bii’to chapter in Arizona. Finally, Shaandiin P. Parrish, who holds the title of Miss Navajo, is flashing a thumbs-up as the last vehicle, loaded with food and supplies, leaves Arizona’s Bodaway/Gap Chapter House.

It wasn’t the last time Chischilly would work on assignment for a major national newspaper. Since that day, she’s done assignments for Getty Images Inc. and The Wall Street Journal. “I’ve been seeing my photographs pop up in The New York Times, CNN, and BBC News. I did an assignment for High Country News as well. When all of these opportunities starting showing up, I was in the middle of finals. I tried to keep up with my finals and finish strong, and also produce high-quality photographs for these publications. It was kind of stressful.”

In addition to pursuing a degree in journalism and mass communications at UNM, Chischilly is studying art history. Although she misses campus, she’s anticipating that all of her fall classes will be online. She plans to stay in Gallup, which is close to her hometown, for the semester.

“I didn’t grow up with a camera in my home,” says Chischilly, who also interns at the Navajo Times. “The first camera that I got was a Canon film camera. A girl was selling it for, like, $20. I met her at a movie theater in Gallup. She quickly showed me where the film would go and where to press the button to take the photo and then she left. I didn’t know what to do with it at that point because I never had a film camera before.”

Chischilly learned how to operate the camera by watching YouTube videos. In her first semester at UNM, she enrolled in a course on black-and-white photography and learned how to process film in the darkroom. The following semester, she took an introductory course in photography. In a one-on-one session, she was told that her work reminded the instructor of photojournalism. “I never heard that word before, and I didn’t know what it was about. I looked it up and decided that was what I wanted to do. That professor, and the film camera, guided me towards this field. I think it got me to where I am today.” ◀