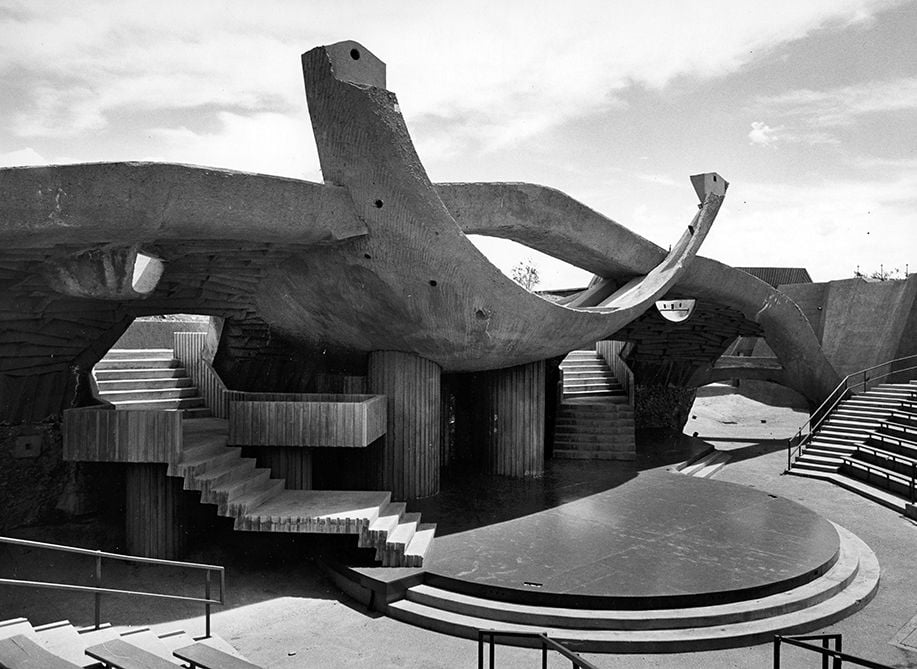 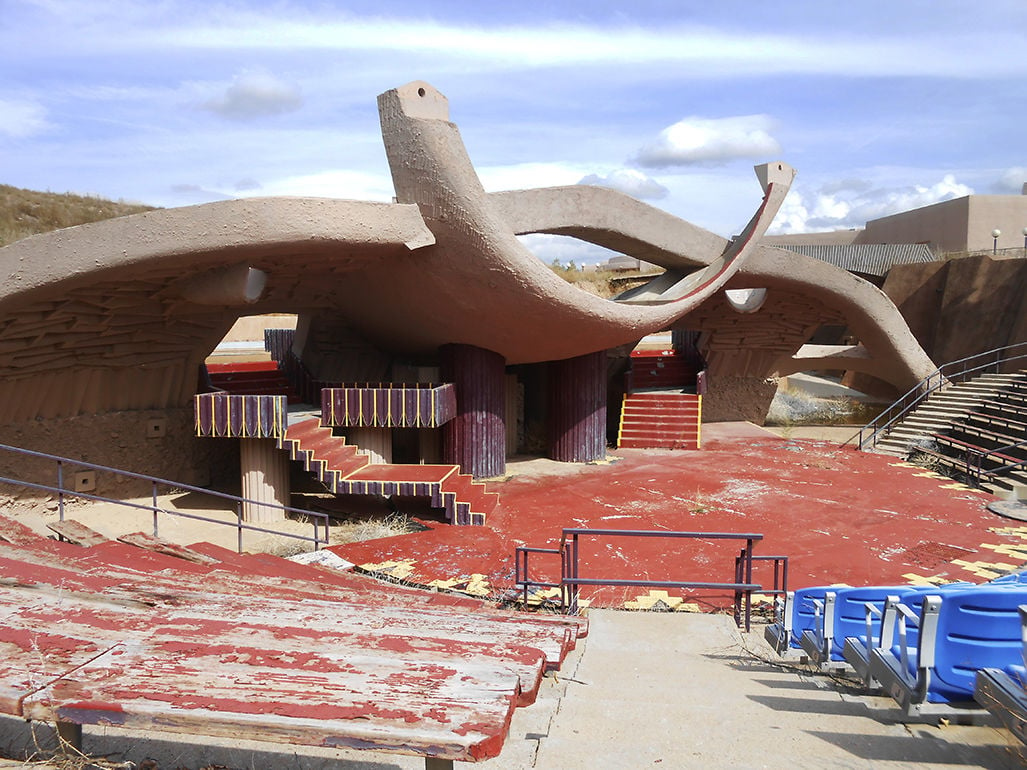 The Paolo Soleri Amphitheater eschews rectangularity. It has no proscenium and is mostly open to the sky. Its weird shapes, especially the long, embracing bridge and the “horned” upper stage, suggest something like a living presence. The story of this theater, a 1970 masterwork of earth-cast concrete that was closed to the public in 2010 by the All Indian Pueblo Council, is the opening gesture in SITE Santa Fe’s biennial exhibition much wider than a line.

The first thing you see at SITE is a large doorway whose shape was abstracted from an aperture in the Soleri theater. Inside is a huge, wall-size photographic print of the building on the campus of the Santa Fe Indian School. SITE preparators built a concrete bench that curves away as a three-dimensional extension of the photo — this device is a longstanding interest of Conrad Skinner, who has studied the history and construction of the amphitheater for the past six years. Skinner’s piece is among works by more than 35 artists featured in much wider than a line.

The amphitheater was the brainchild of Italian-born, Arizona-based architect Paolo Soleri (1919-2013), working with Lloyd Kiva New, then art director at the Institute of American Indian Arts; IAIA drama head Rolland Meinholtz; and Hopi artist Charles Loloma. New and Meinholtz, who wanted the theater to reflect the school’s multi-tribal program, traveled to research ceremonial settings at Hopi, Aztec, Taos, and San Ildefonso, as well as those of Plains and Northwest tribes. “Meinholtz told me he went down four times to communicate with Soleri, and the architect started to change the design based on the input from New and Loloma and Meinholtz,” Skinner said.

The remarkable structure was “built down” rather than built up from the ground. Soleri and his apprentices and IAIA students cast the sculpted forms of the shell, the bridge, and the upper stage on the ground, then excavated to add the supporting structures as they went down. The construction involved “silt-pile” earth-forming techniques that were developed at Soleri’s nonprofit educational Cosanti Foundation in Scottsdale.

The long hill behind the theater was created using the earth that was excavated to create the bowl that holds the amphitheater and a spectator arc of 2,000 seats. In his extensive online piece “A History of the Paolo Soleri Amphitheater,” Skinner writes that “embedding the bowl in the earth and opening the audience’s view to the mountains beyond establish a connection between locale and the world beyond.”

While the theater is sprawlingly horizontal, one of the compelling details of Soleri’s design has to do with vertical orientations. Performers could access the upper stage in two ways. Visible steps on both sides, just behind the main stage, lead up through irregular openings in the cavelike shell — and the two large, grooved columns behind stage center have doorways facing away from the audience that permitted actors to ascend unseen to the upper stage. Thus there are two grouped pairs of vertical passages, two visible and two obscured, as Skinner describes them. He also recalls that vertical movement can signify transformation in Native cosmology.

From 1970, the Soleri theater was stage to scores of events, including Santa Fe Indian School graduation ceremonies; the annual Native Roots and Rhythms festivals; concerts by Santana, k.d. lang, Lyle Lovett, and many other musicians; and the June 2010 memorial service for theater supporter Stewart Udall, former congressman and U.S. Secretary of the Interior. Skinner, who earned a master’s degree in architecture at the University of New Mexico, attended the Udall memorial and was fascinated by the amphitheater’s thrust stage, cavelike shell, and other features: “Never had I seen a stage so inviting of physical engagement by performers.” He subsequently pursued his investigations at Arcosanti, Soleri’s laboratory town north of Phoenix; and at the IAIA archive. He also interviewed surviving early IAIA staff and students.

The Soleri exhibit at SITE includes a slide show of the theater’s construction, featuring wonderful photos from Cosanti. Based on Skinner’s wish that the exhibition space should reflect the fact that the theater resembles a cave or underground room, museum preparators built a series of long, cagelike metal frameworks to be placed along the high intersections of walls and ceiling and covered in cloth, to add what Skinner described as “stepped cove shapes.”

In early July, artist Eliza Naranjo Morse (Santa Clara) was busy making a micaceous-clay model for the installation that “acknowledges the strength and beauty of earth as a building material,” she said. “I hope it inspires a sense of sanctuary. An important aspect of the Paolo Soleri is an emergence point. I have interpreted that by creating a physical connection between the sculpture and a point where the piece travels into the floor of SITE Santa Fe. This reminds us all of the connection we all share to the ground below us.”