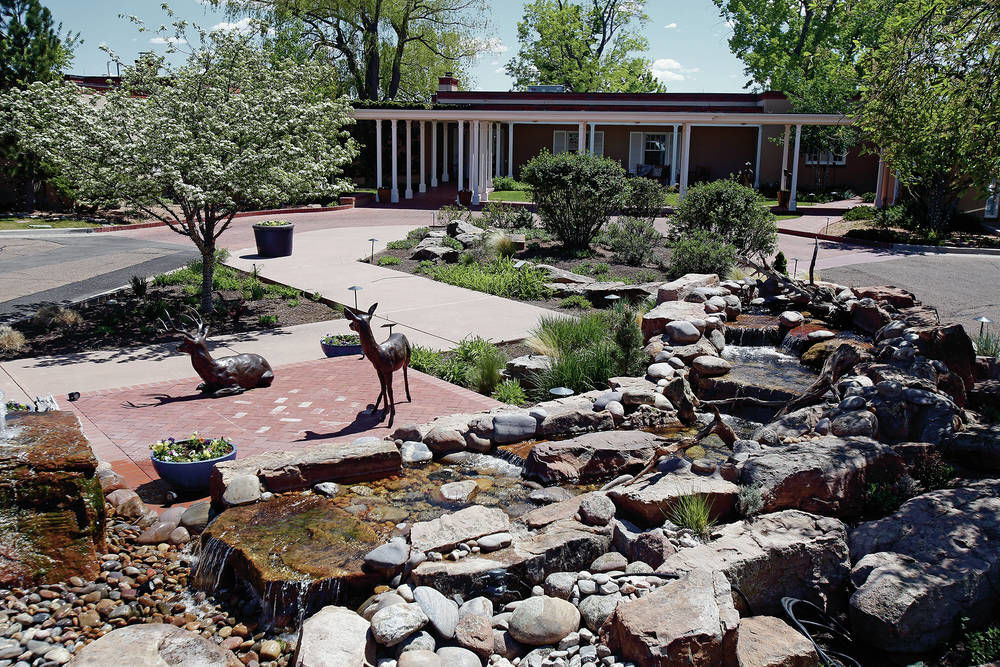 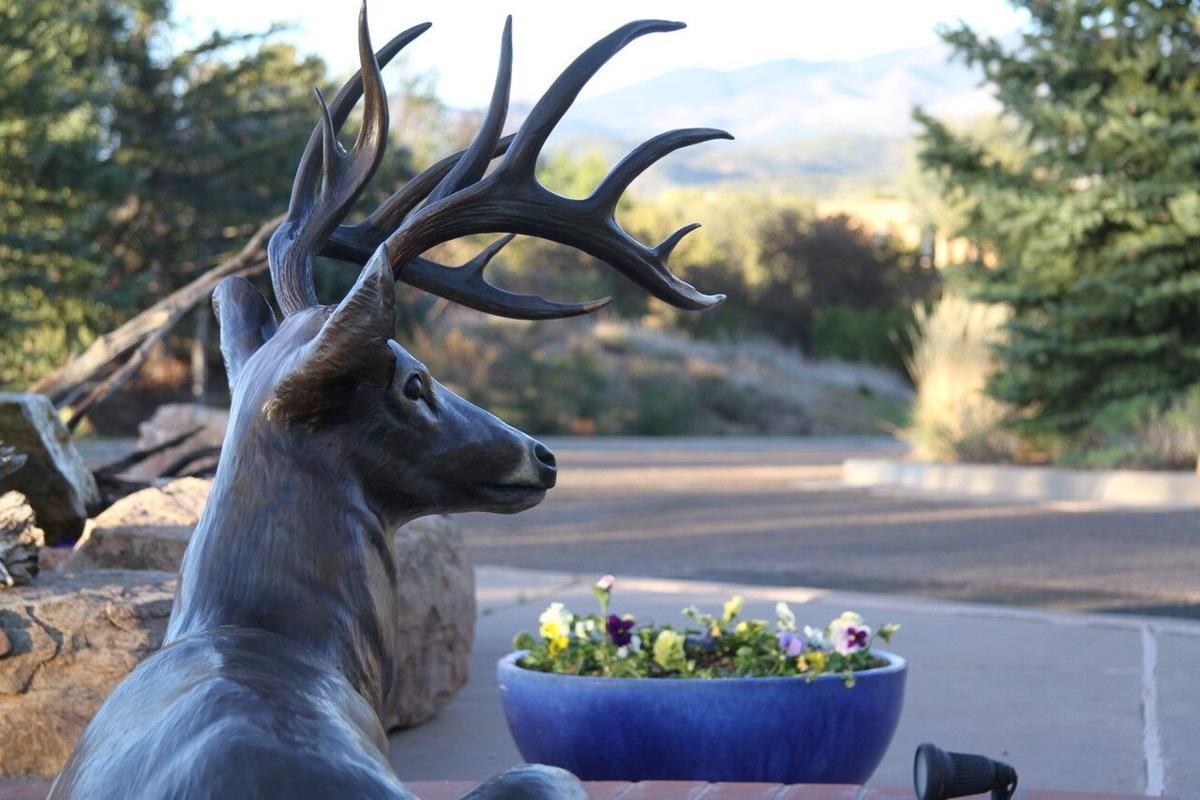 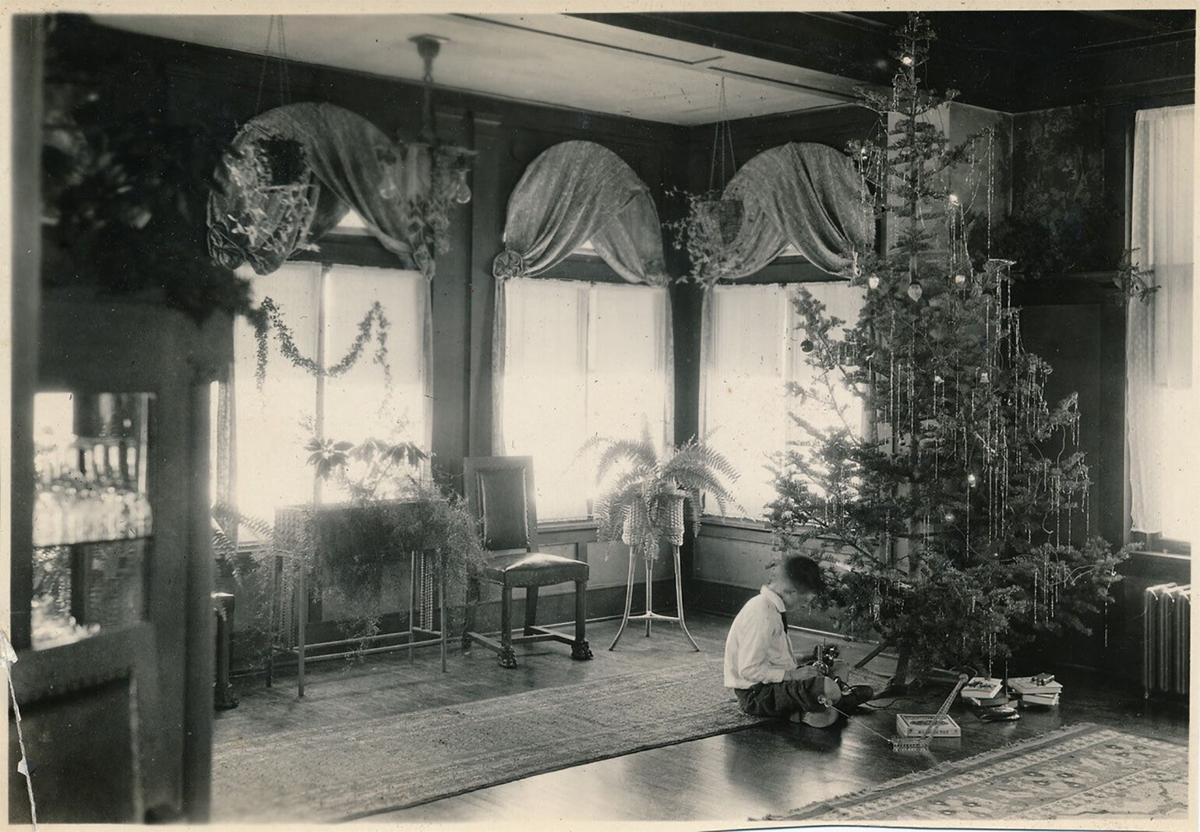 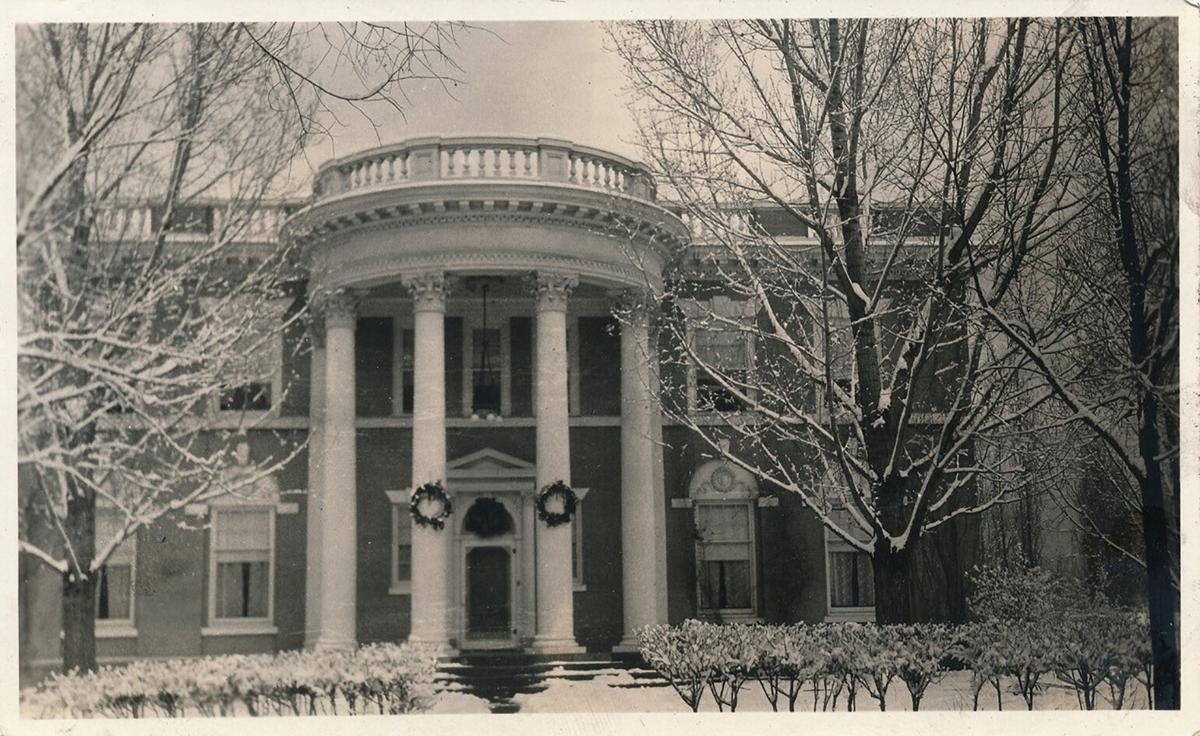 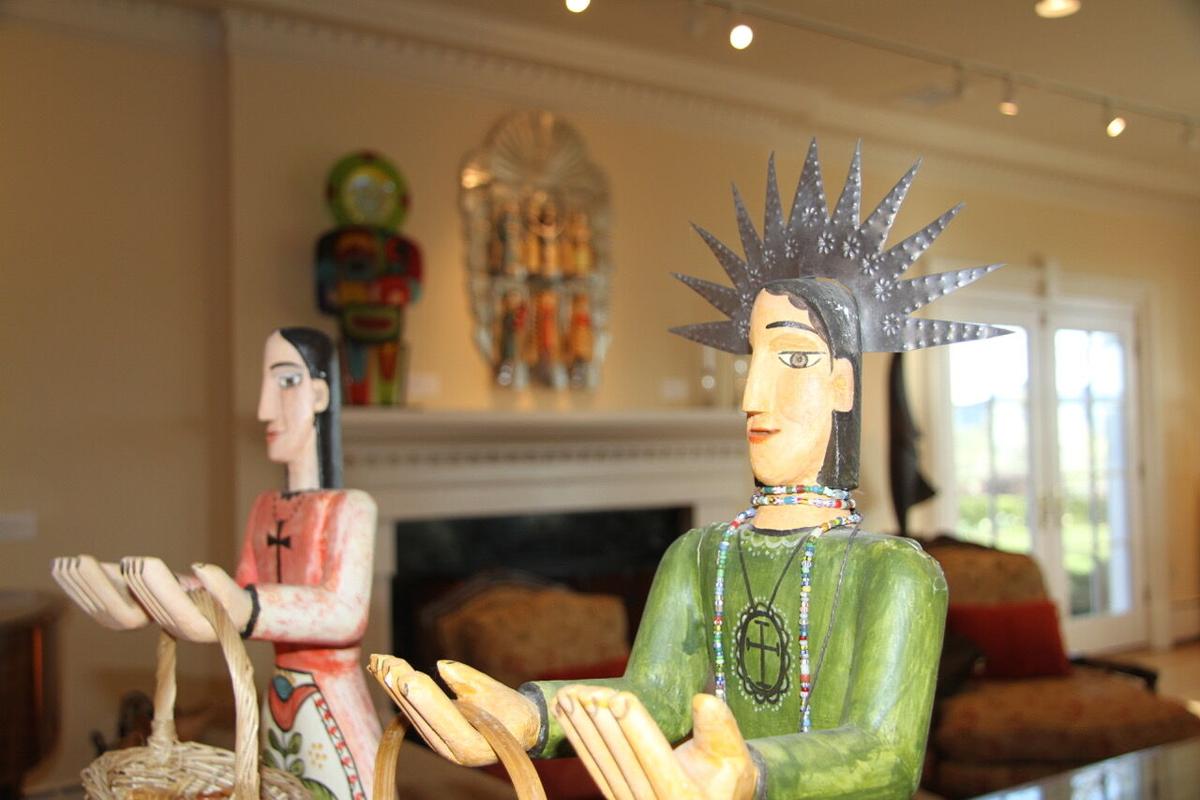 Marie Romero Cash, two versions of Our Lady of the Harvest (1990 and circa 1980s), carved and painted wood, courtesy Jaima Chevalier 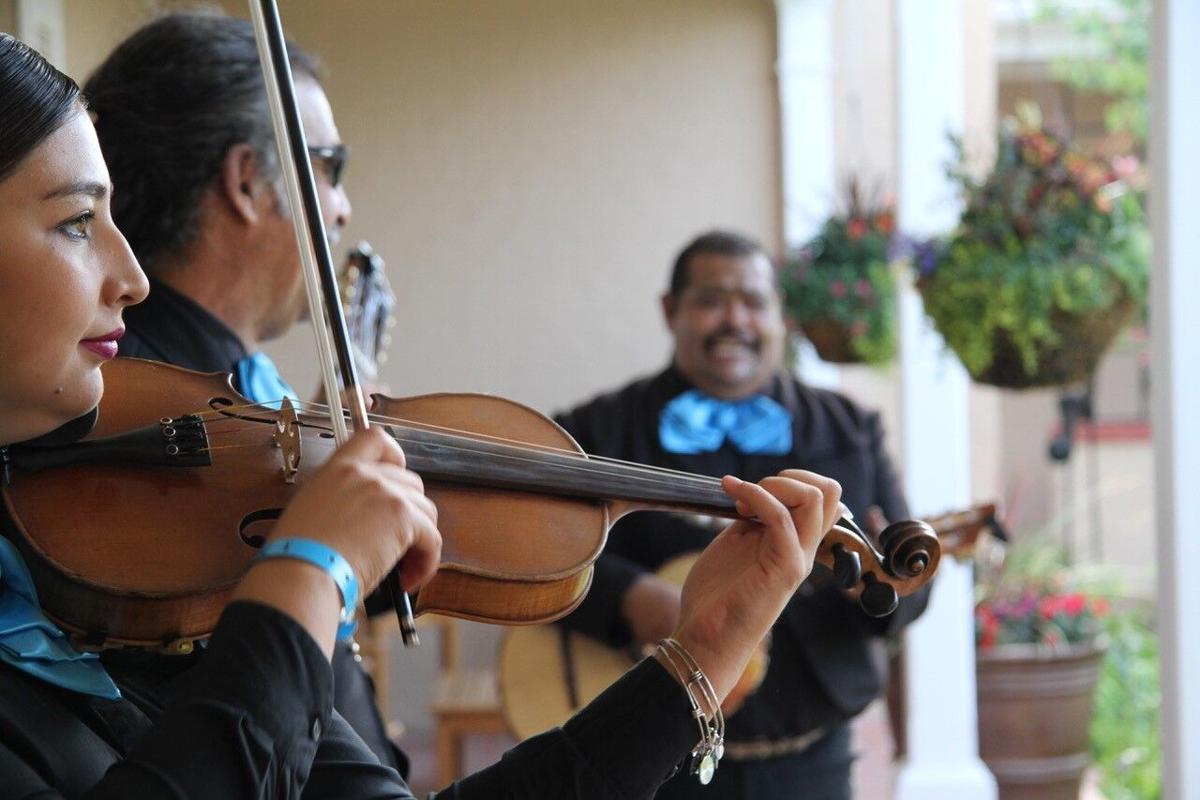 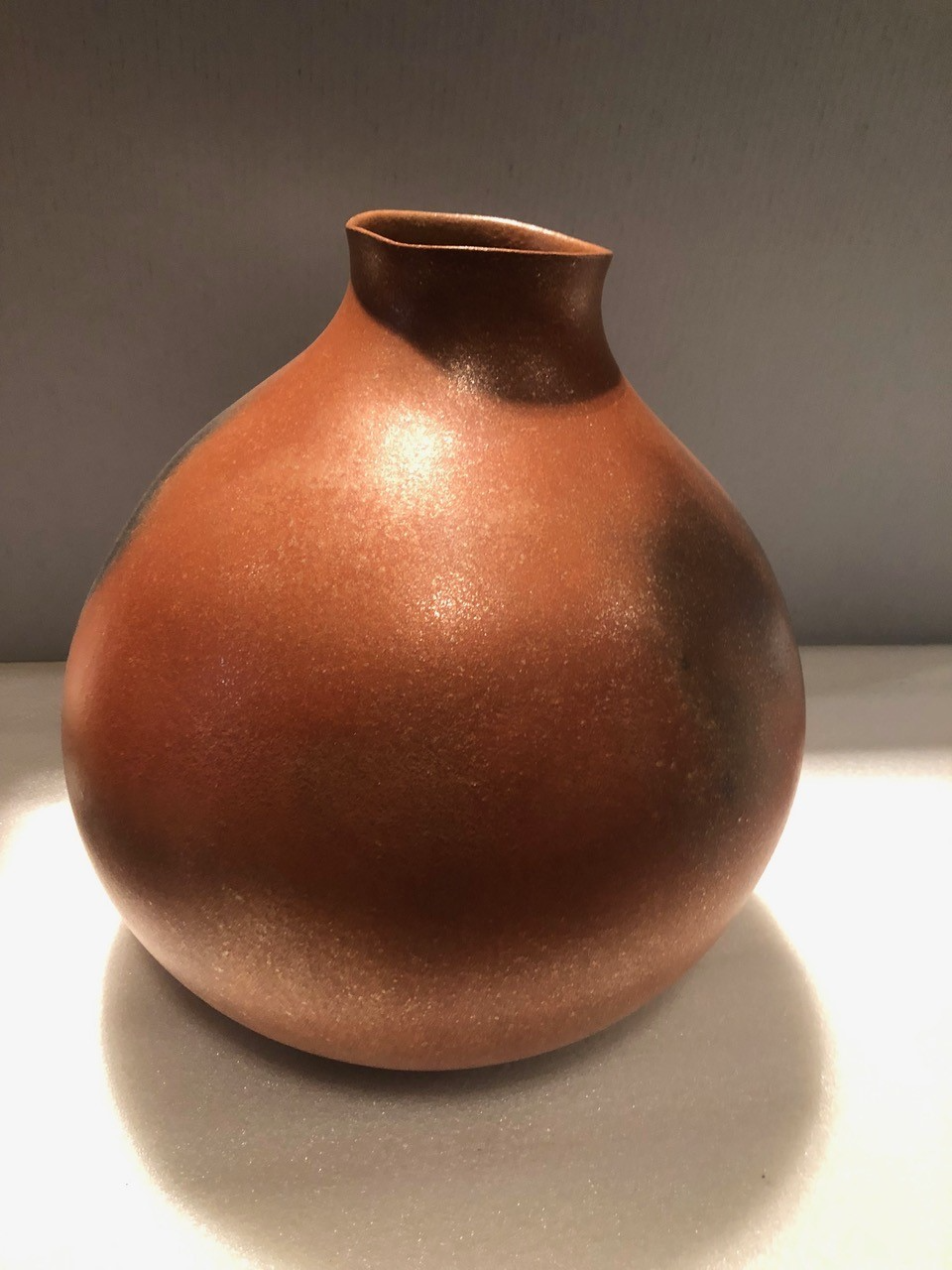 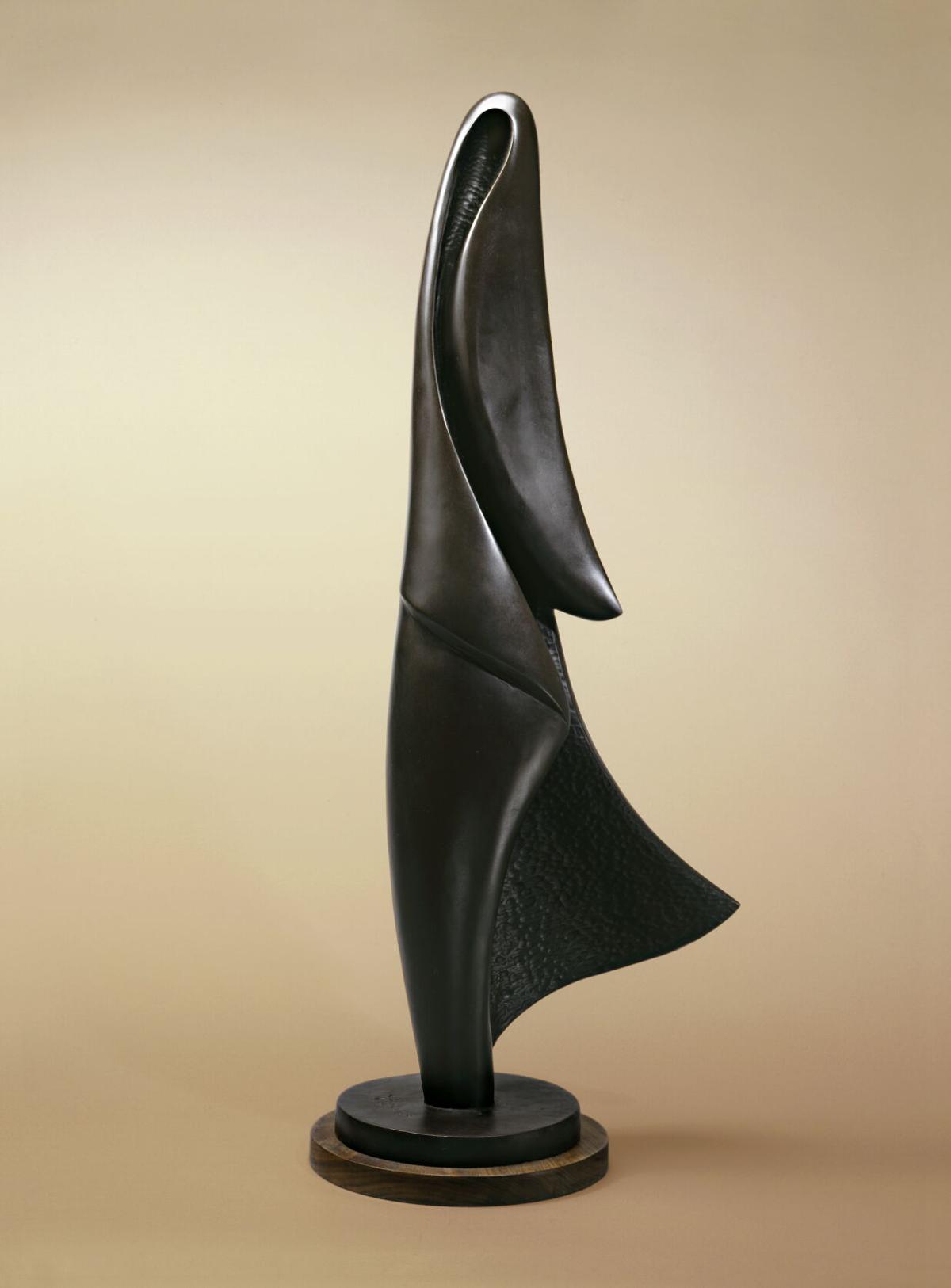 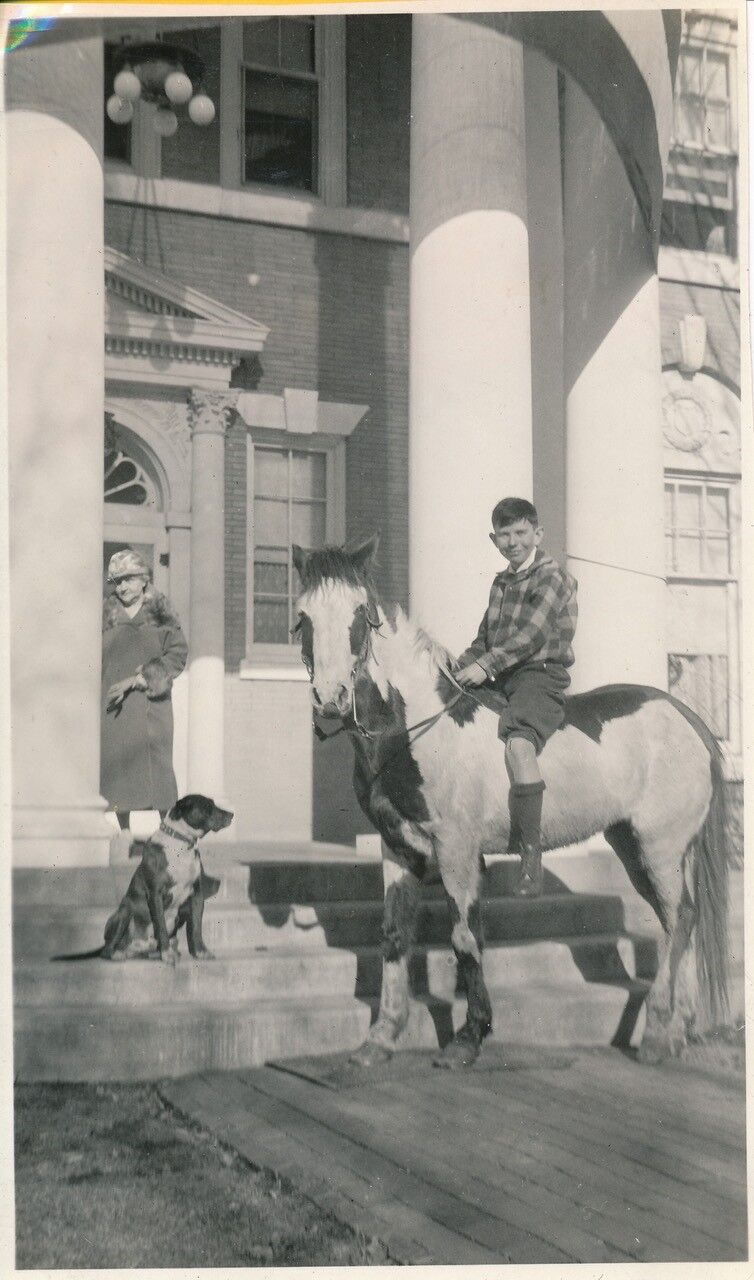 A boy with a horse outside the governor’s mansion (circa 1925-1927), courtesy George Foster Hannett

Marie Romero Cash, two versions of Our Lady of the Harvest (1990 and circa 1980s), carved and painted wood, courtesy Jaima Chevalier

Follow the brick path through white-painted colonnades, soon to be decorated with holiday trimmings, and step into your dream home away from home. Visitors are welcome at the mansion of Gov. Michelle Lujan Grisham. That is, they were, until the coronavirus pandemic put a stop to public gatherings, including the mansion’s docent-led tours. That doesn’t mean that it’s world-class collection of New Mexico artists, living and dead, is no longer accessible.

Between April and November of 2019, more than 650 visitors attended the tours. They were treated to the works of Georgia O’Keeffe, Sheldon Parsons, Will Shuster, and Joseph Henry Sharp, as well as sculpture by Allan Houser. Approximately 100 examples of art by as many artists are currently housed at the mansion. And the New Mexico Governor’s Mansion Foundation, which sponsors the tours, believes that you should still have an opportunity to see some highlights of the collection, even while sequestered at home. So they produced a video tour.

“I had wanted to do a film there for years, but I never had a real opportunity,” says filmmaker Jaima Chevalier, special assistant to the foundation’s president. “A lot of governors’ mansions around the country have short videos or films.”

Chevalier is the director of The People’s House, a free 16-minute look inside the one-story, Territorial-style mansion, that premieres Friday, Nov. 6, on the foundation’s website (newmexicogovernorsmansion.org) and on santafe.com. It can also be viewed on Vimeo at vimeo.com/465042648. It will remain on the website indefinitely.

Narrated by local author, journalist, and historian Hampton Sides, the film takes visitors inside the mansion, with a focus on its eclectic art collection, and it provides a history of the various residences of New Mexico’s heads of state since Santa Fe was founded in 1610.

When it came to filming, Chevalier was a one-woman operation. “The governor is really observant of her own rules,” she says of Lujan Grisham’s public health mandates regarding the pandemic. She said, ‘No film crews, no extra people, and you have to be fully masked.’ I even wore gloves. It made it a little difficult, but I was happy to comply.”

Chevalier hired Santa Clara Pueblo and Pojoaque Pueblo filmmaker and multimedia artist Ashley Browning to do the editing. The foundation had a script written by docent Kathy Dickerson that was used for public tours and reworked for the documentary. The next phase was finding someone to do the narration. She happened to catch the two-and-a-half-minute film The City, Different, written and narrated by Sides in a clear, affecting voice. The short film shows footage of empty streets and local venues around Santa Fe and strikes a poignant tone about life in the city during the pandemic. “I thought, Wow. He has a really great voice.”

Governors’ residences then and now

The mansion is the third formal residence built for New Mexico’s governors. It’s been dubbed The People’s House “because it belongs to the entire state,” narrates Sherry Parsons, the foundation’s president, at the start of the documentary. She introduces Sides, who delves into its history.

The first governor’s residence was on the property of the Palace of the Governors, which is now a state museum. It was formerly the capital of the province of New Spain. For 12 years, it was under the control of the regional Native pueblos, who ousted the Spanish colonialists from Santa Fe after the Pueblo Revolt of 1680. When the Spanish returned, it remained a governor’s residence until 1821. During the Civil War — New Mexico was a U.S. territory at the time — Confederate forces, who were en route to California with the intention of seizing its seaports, engaged in violent clashes in New Mexico at Mesilla and Valverde. Maj. Charles Pyron, leading a Confederate force from Texas, pushed on to Santa Fe where he found the Palace of the Governors unguarded. It remained under Confederate control for less than two weeks, however, when the Confederates were finally defeated in the Battle of Glorieta Pass, in 1862.

The palace is also where Lewis Wallace, the 10th governor of New Mexico Territory (1878 to 1881), completed his monumental work of historical fiction, Ben-Hur: A Tale of the Christ (1880).

“All told, the Palace of the Governors served as home to various forms of government for nearly three centuries, during periods of Spanish, Native American, and Mexican rule, and as a U.S. territorial capital and governor’s residence until the early 1900s,” Sides narrates.

The second governor’s residence, a Greek Revival-style mansion, was built around 1912 when New Mexico achieved statehood. It was located in Downtown Santa Fe, adjacent to the New Mexico State Capitol. By the 1950s, the home was severely damaged by flooding from the Santa Fe River, making it unsafe for habitation.

A historic photograph from the 1920s, featured in the documentary, shows a small boy inside the second mansion at Christmas time, squatting by a Christmas tree and examining the gifts beneath it. The photo comes from the collection of Albuquerque lawyer George Foster Hannett, whose great uncle, Arthur T. Hannett, was New Mexico’s governor from 1925 to 1927. “He inherited a great deal of his famous ancestors’ belongings,” Chevalier says. “He called me during the Martinez administration. He said, ‘I have a telegram from Pancho Villa, and I have an old safe with the governor’s seal on it, and I have these old photographs.’ He gave me permission to scan and use the photos of the second mansion, which very few people know about.” Several of Hannett’s photographs are featured in the video tour.

The third mansion, located at 1 Mansion Drive in Santa Fe, was built in the mid-1950s. Gov. John F. Simms was the first head of state to serve out his complete term while under its roof. It was designed as an open plan, Territorial-style home, with an interior of something under 8,000 square feet, and views of the surrounding landscape and the Sangre de Cristo Mountains. “It recalls a sprawling hacienda of Spanish Colonial days, design elements from the Native American pueblos, and the Territorial style developed after New Mexico became a U.S. territory in the mid-1800s,” Sides narrates.

The virtual tour gives viewers a look inside various rooms of the mansion, its furnishings, and its art. In the foyer, where O’Keeffe’s 1945 painting Spring Tree No. 1 is hanging, visitors cross a large rug bearing the Great Seal of New Mexico. Other superlative examples of regional art and historic furnishings are highlighted throughout the mansion, including Sheldon Parsons’ landscape painting Santa Fe Mountains in October (circa 1919), and a Spanish Colonial-era campaign table that was originally designed for military use. The table, we learn from the film, traveled by oxcart from Mexico City via El Camino Real de Tierra Adentro (the Inland Royal Road) to reach its final destination. It now serves as a display stand for the foundation’s commissioned holiday ornaments, which feature designs that reflect New Mexico’s culture and heritage. The group raises money to purchase artwork for the mansion through the sale of the ornaments, which are available online (newmexicogovernorsmansion.org/shop).

Some of the artwork is on loan from state museums. The governor, and the foundation’s docent and design committees, work with museum heads and their designees to identify pieces in their collections for the home. Some artworks that are on loan to the mansion change out with each incoming administration, based on the sitting governor’s tastes. But some works, such as the O’Keeffe painting and a micaceous pot by artist Lonnie Vigil are long-term loans. Vigil’s pot, simply titled Jar, was made in 1997. It comes from the collection of the Museum of Indian Arts & Culture.

“Lonnie is a friend of mine,” Chevalier says. “I called him up and said, Hey, Lonnie, we’re filming your pot. We could only pick 10 artworks to feature, and I’m really happy that your piece was selected, and I just wanted to make sure that you’re OK with that. And he said, ‘Jaima, I didn’t know it was up there.’ I was flabbergasted. If I had a piece up at the mansion, everybody would know about it.”

Vigil is a nationally recognized potter from Nambé Pueblo whose work is in the Smithsonian American Art Museum. Under the current gubernatorial administration, Hispanic, Anglo, and Indigenous artists native to the region are all featured. Houser, for example, is represented in his 1989 sculpture Night Wind, a sleek, narrow, abstract bronze with a figural presence that suggests a cloaked human form. An artist of Chiricahua Apache heritage, the former faculty member of the Institute of American Indian Arts was renowned for modernist sculptures that reflect Native American themes.

In the mansion’s dining room is a large table designed by Santa Fe interior designer Gene Law that can expand to 36 feet. It’s the centerpiece of the room, and it rests beneath a hand-painted ceiling of floral and geometric motifs. “Stenciled by New Mexican artists, the design takes its inspiration from the Spanish palace near Madrid, where King Phillip III signed the papers authorizing the settlement of Santa Fe,” Sides narrates. Above the table is a tin chandelier that reflects the Spanish Colonial tinwork still practiced by New Mexican artists today.

One wall of the dining room boasts artist Paul Burlin’s undated large-scale painting, Indian Ceremonial Dance, on loan from the collection of the New Mexico Museum of Art. It shows the influence of Native culture on the modernists, like Burlin, who came to New Mexico in the early 20th century, attracted by its Native and Hispanic cultures, open skies, and stunning landscapes.

The film also gives a glimpse of interiors and grounds normally closed to the public, such as the patio outside what is now the mansion director’s office. But some people, including Sides himself, have never been inside the mansion at all, let alone its private areas.

“We’re hoping to have a wrap party in 2021, and we’ll invite Hampton and his wife,” Chevalier says. “And Lonnie Vigil — he’s never been to mansion, either, even though his pot’s been up there for years.”

Chevalier and the foundation plan for the film to be used as an educational tool in classrooms because of its focus on aspects of New Mexico’s 400-year history. Educators can expound on such topics. For the visitor, it’s a broad introduction to New Mexico’s cultural heritage, as well as the value placed on that heritage by its heads of state, both past and present. ◀