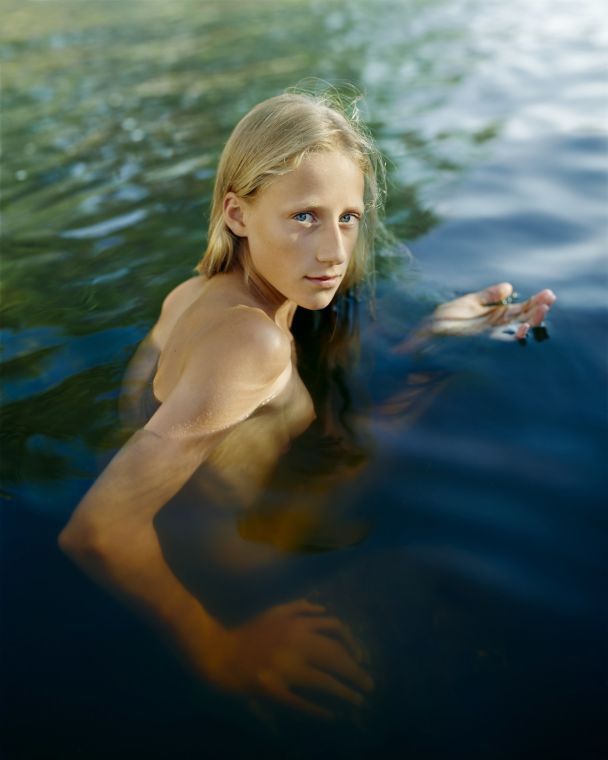 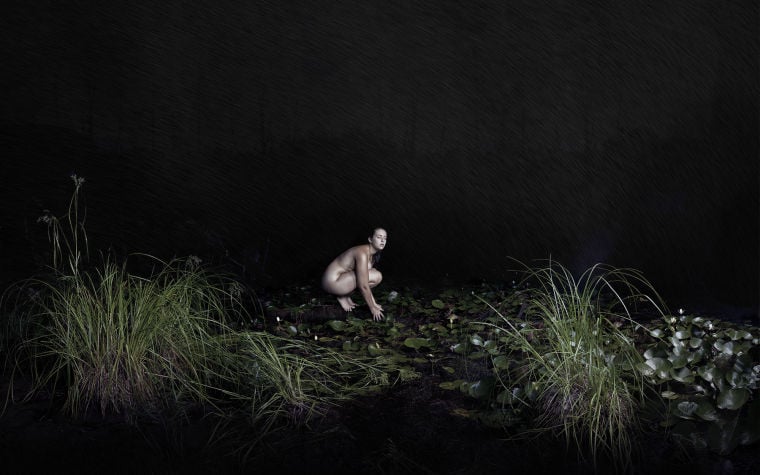 Bear Kirkpatrick: All the Links Rattled at Once, 2010, archival pigment print

Bear Kirkpatrick: All the Links Rattled at Once, 2010, archival pigment print

New Hampshire-based photographer Bear Kirkpatrick’s Hierophanies series places naked models into dark, moody nighttime landscapes. The images, some of which are included in Photo-eye Gallery’s exhibition The Nude — Classical, Cultural, Contemporary, convey a sense of animalistic, instinctual activity. In the world Kirkpatrick envisions, the human figures are small and fragile, moving in a realm of limited visibility, at the mercy of the unseen. Most of the light is artificial, illuminating the immediate foreground, while features of the landscape quickly disappear in the enveloping night. “Backgrounds that fade into darkness sort of scare me a bit,” Kirkpatrick told Pasatiempo. “The light only goes so far. It’s symbolic of the light of our own intellect, our own knowledge, even our own insight. That only gets you so far. There’s a lot of blackness out there.”

Kirkpatrick shoots deep in swamps and forests, transforming natural landscapes into nocturnal scenes at once magical and mysterious. “The primary starting point I had in making them was because I liked the way landscapes changed when you altered the light on them. Certain places in the woods or in the marshes, the grass, or the trees are predominantly shaped to your eye by the way the sun moves across them. I started using light from different angles, trying to bring out a hidden landscape within that landscape, a kind of face you normally wouldn’t see and that struck me. I had to wait until the sun went down or mostly down, so it was dark enough that the flashes were stronger than the ambient light.”

Kirkpatrick’s shooting time — about 15 or 20 minutes, before it became too dark to shoot — meant photographer and model had to work fast. “It was almost like a forced difficulty,” he said, “to make yourself come to a place where you didn’t know what to do next. You only had a few minutes to do something, and you knew you were not going to come back there; you were not going to get that model there again. What are you going to do? You had to move quickly. That often gave us the most interesting stuff. A lot of the images were mistake images. I just shot as much as  I could. The mistakes, the unplanned kind of stuff, were often the  most interesting.”

Kirkpatrick is not the only photographer in the exhibit who places his subjects in outdoor settings. In Santa Fe-based photographer Patti Levey’s Vallecitos, for instance, a reclining nude in the foreground of a majestic vista settles into the landscape, becoming a natural extension of it. Levey’s photographs, like those of Neil Craver, whose work is also included, hark back to the Symbolist work of early-20th-century photographers such as Anne Brigman.

Photo-eye discovered Craver, along with Kirkpatrick, Evan Baden, and Karin Rosenthal, on the newly launched Art Photo Index (www.artphotoindex.com), a comprehensive online database of contemporary fine-art and documentary photographers. The site launched in December 2012, with more than 3,000 vetted photographers.

Baden takes amateur photos as his starting point. Recreating self-shot nude images found on the internet, he establishes a dialogue between professional and amateur photography. He elevates the self-shot nude photograph from the titillating realm of pornography to that of fine art and places the viewer in the role of voyeur, glimpsing private bedroom moments. He duplicates all the domestic details for each image.

Santa Fe-based photographer Jo Whaley also stages elaborate sets before shooting. Her Birth of Venus presents its subject, a young woman, in a  classic pose that references Sandro Botticelli’s 1486 painting of the same title. Whaley places her nude amid a pile of trash and rubber tires, a sharp contrast to the mythic world envisioned by Botticelli.

The classical nude is a primary reference point for several of the photographs on display at Photo-eye. Peter Ogilvie, Carla van de Puttelaar, and Rosenthal, for instance, emphasize the aesthetic beauty of the human form. Although the majority of the work is contemporary, two exceptions are Imogen Cunningham’s Phoenix Recumbent, a 1968 female nude, and a number of Chris Enos’ nudes from the late 1960s and 1970s.

Joey L’ s luminous portraits of Ethiopian tribal peoples give us pause to consider ideals of beauty and nudity in non-Western cultures. His Photograph of Rufo is a serene, sun-drenched image of a young woman bedecked in ornamental jewelry and textiles.

Jock Sturges’ intimate photographs of Eva, a young model with whom he has an ongoing professional relationship, are captivating images of feminine beauty. Sturges is known for his nudes of adolescent girls and young women, controversial shots that explore burgeoning sexuality. According to a statement Sturges wrote for Photo-eye’s blog, the model is from a family of French naturists. His Eva, Le Porge, France shows the young woman partially submerged in a canal.

Images of nudes in or near water are common in the exhibit. In addition to Craver’s black-and-white nudes and Sturges’ portrait of Eva, Rosenthal’s Love Knot and Source depict bodies in embrace in shallow waters. Here, nudity is suggested but not explicit. The images convey a sense of pure intimacy, and the waters serve as the primordial wellspring of love.

Yet it’s Kirkpatrick’s provocative work that approaches the archetypal most powerfully. As a device, his small window of time for shooting ideally allows him to capture essential, innate qualities in his models. “The body is going to move in a way you haven’t thought of beforehand. That may reveal things about the body and the way it moves in the world,” he said. “We didn’t have time to think of a storyline or what this meant or whether this is referring to Edward Weston’s nudes or  some other photographer. You had to move, almost in desperation, and hope that something is revealed in that, some older, primal thing.”   ◀