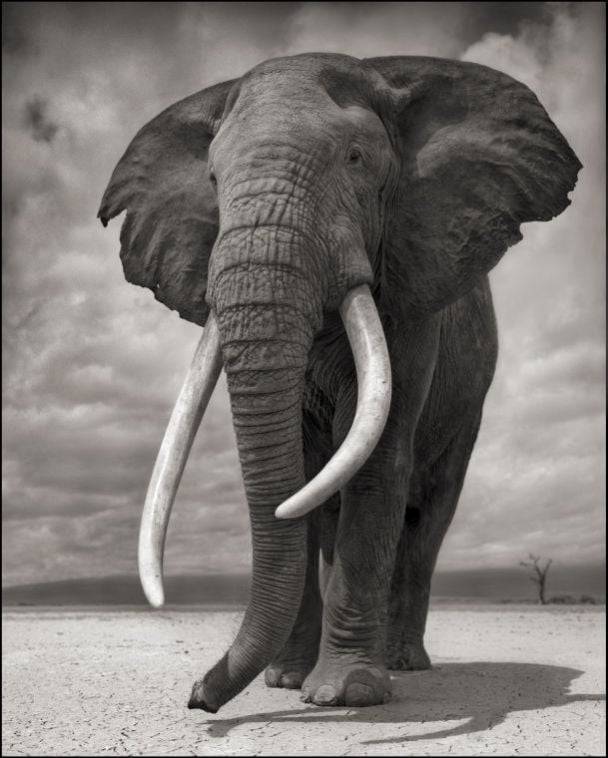 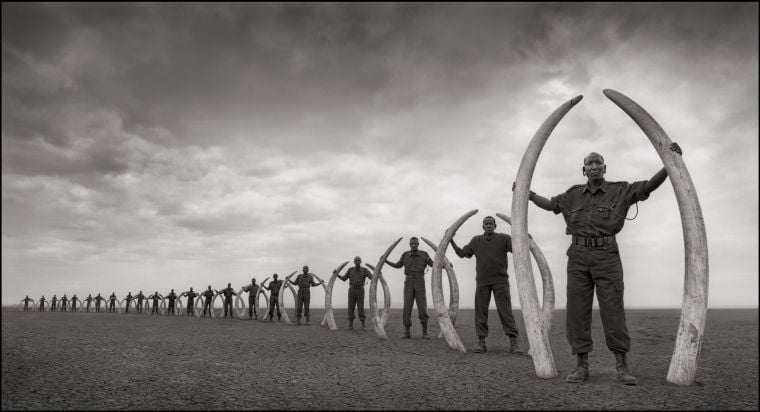 A matriarch leads her herd of elephants through the grass in Africa’s Amboseli National Park, their figures diminishing in the distance. This image, which accompanies the opening essay of photographer Nick Brandt’s new book Across the Ravaged Land, can be compared with another photo shot a few years later of a line of rangers, also diminishing in the distance, holding the confiscated tusks of elephants killed by poachers. These two photographs take on added poignancy when one reads in the essay that Marianna, the matriarch, was shot and killed in 2009.

Brandt has spent 12 years photographing wildlife in East Africa, and his images include portraits of elephants playing in the dust, buffalo, giraffes, hyenas, leopards, and lions captured in close-ups so intimate one senses their souls through their eyes. “I loved animals in general as a child,” Brandt told Pasatiempo. “As so often happens as kids grow up, you sort of partly lose your obsession with animals, then it gradually starts filtering back. Going to Africa, there was something about that particular place and those particular animals. There’s so few places left in the world where we can see large numbers of animals in the wild. Even though it’s amazing and moving to come across, say, polar bears in the Arctic or jaguars in the South American jungle, the fact that you’re looking out across the plains, seeing 10 different species of massed animals in your vision is really quite magical.”

Photographs from Across the Ravaged Land are on exhibit at Photo-eye Gallery. The book, published by Abrams, completes a trilogy Brandt began in 2000. “From the outset, the trilogy was meant to be an elegy to a vanishing world. At the beginning I photographed a kind of paradise, but as time went by, it felt irresponsible and just a bit blinkered to just keep on photographing all beautiful stuff. I felt the need to increasingly address the darker side, the more real side. The second and the third books are deliberately sequenced to go from a kind of lush, verdant world of plenty to a stark world of diminished numbers. That was particularly the case in the second book. With [the third] book, there is a sequencing that follows an ever-darkening path.”

The first two books in the series, On This Earth and A Shadow Falls, depict Brandt’s subjects in portraits that pronounce their dignity, beauty, and power. As Brandt points out in his essay, the book titles form the sentence “On this earth a shadow falls across the ravaged land.” By the time he was photographing what would become the third book, East Africa had drastically changed. “The escalation of demand for animal parts has really massively increased since 2008 with the one-time sell-off of ivory that all the conservationists warned would kick-start a wave of new killing, and that’s exactly what happened.” Stockpiles of more than 100 tons of ivory were sold by African nations to China and Japan. “There’s incredibly little international pressure because everybody’s terrified of criticizing the Chinese,” Brandt said. “It’s an uphill battle. We’re running out of time.”

Across the Ravaged Land documents this moment of crisis for Amboseli’s wildlife. The stark, monochromatic imagery of the animals is tinged with sorrow. Captions for some of the portraits detail their demise. Winston, for example, was a 30-year-old elephant barely in his prime when Brandt photographed him in July 2010. He is commemorated in the photograph Elephant With Half Ear. The caption states he was killed by poachers a month after Brandt took the photo. When he arrived that year, he found the poaching had increased to horrifying levels, and the elephants displayed more caution and fear than on his previous visits. As Brandt points out in his essay, the lack of timidity around humans may have contributed to their current plight, making it easier for poachers to target them. “What I show in the book is more of a poetic version of an apocalypse than the reality. The reality is that there’s a continent-wide destruction of animals going on in Africa. If I were to show it as it really is, it would be much more bleak and dark in its presentation. I don’t know how to how to take photographs of elephants with their faces hacked off in a way that transcends straight documentary photography. So I don’t try.” Instead, Brandt focuses on allowing the personality and spirit of his wild subjects to shine through.

Motivated by his anger over the decimated herds, Brandt founded, along with conservationist Richard Bonham, Big Life Foundation to manage the fragile, threatened ecosystem of the Amboseli-Tsavo region, curb poaching, and put an end to the ivory trade through community-based programs designed to address the economic needs of people while protecting the animals in the region. At the time of the book’s publication, Big Life was employing 280 rangers, a number that has since increased to 315 people protecting 2 million acres of wilderness in Kenya and Tanzania. It’s stated on its website that Big Life is the only organization in East Africa with coordinated, cross-border anti-poaching operations, and Brandt is the organization’s president. “It’s a huge responsibility. I’ve got to make sure we keep on raising the funds to maintain such successful operations out there.” While Brandt mostly avoids showing images of the pachyderms’ grim fate in his photography, Big Life Foundation’s website (www.biglife.org) does not. There, a gallery of images labeled “Wall of the Dead” graphically depicts the fate of Winston, Ezra, Sheik Zahad, and many other elephants, all killed between 2010 and 2012 — a heartbreaking testament to the gravity of the situation.

Among the portraits of animals in Across the Ravaged Land is a riveting series of calcified animals found on the shore of Lake Natron, a shallow salt lake in Tanzania with a mineral content so high that the bodies of animals that die in it are left essentially intact. “The calcified series are the only animals in the book that were not killed by the hand of man. I was completely fascinated by these creatures washed up on the shoreline in these perfectly preserved states. I took portraits of them as if alive in death, positioning them on branches and rocks as if they’re posing. They just happen to be dead. I found that too perfectly visually compelling to ignore.”

Death is a constant presence in Brandt’s latest body of work. In addition to the calcified creatures, giraffe and wildebeest skulls are shown littering the parched, cracked earth; trophy heads of lions and water buffalo are depicted mounted on poles; and a final, haunting image shows elephant tracks across a dry lake bed vanishing toward the horizon. “Where did that elephant go to? Is it coming back? And is mankind going to come to its senses and stop the killing to allow future generations of animals to cross that lake bed again?” ◀

▼ Nick Brandt: Across the Ravaged Land