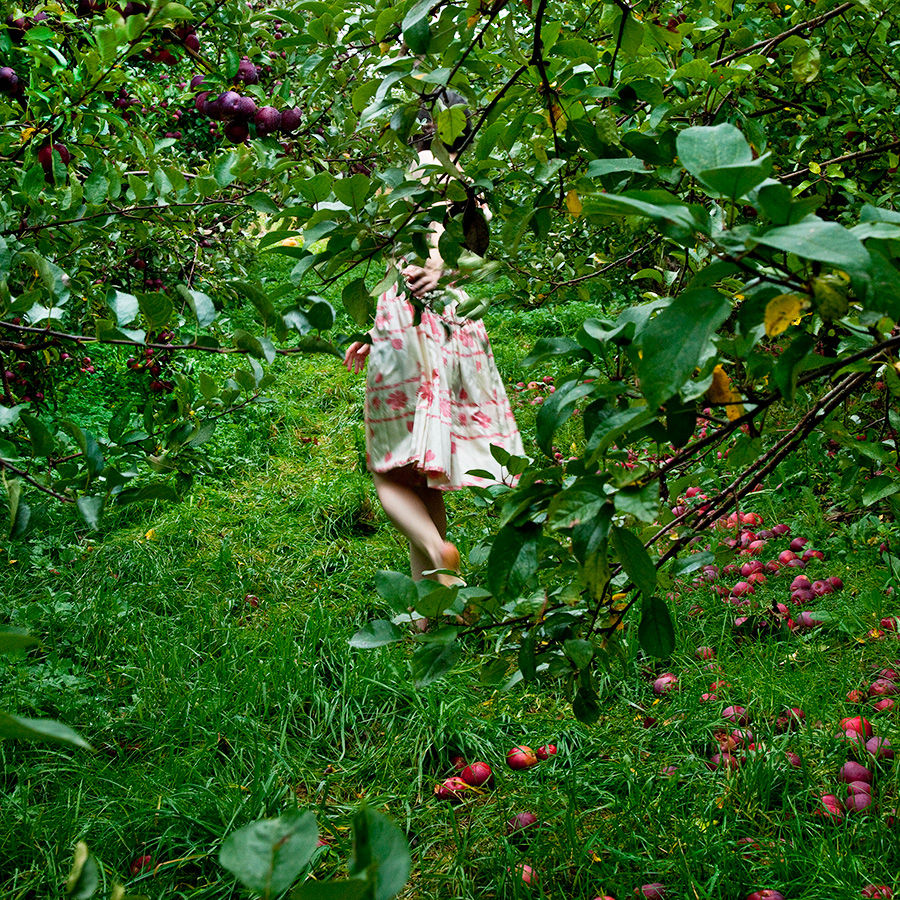 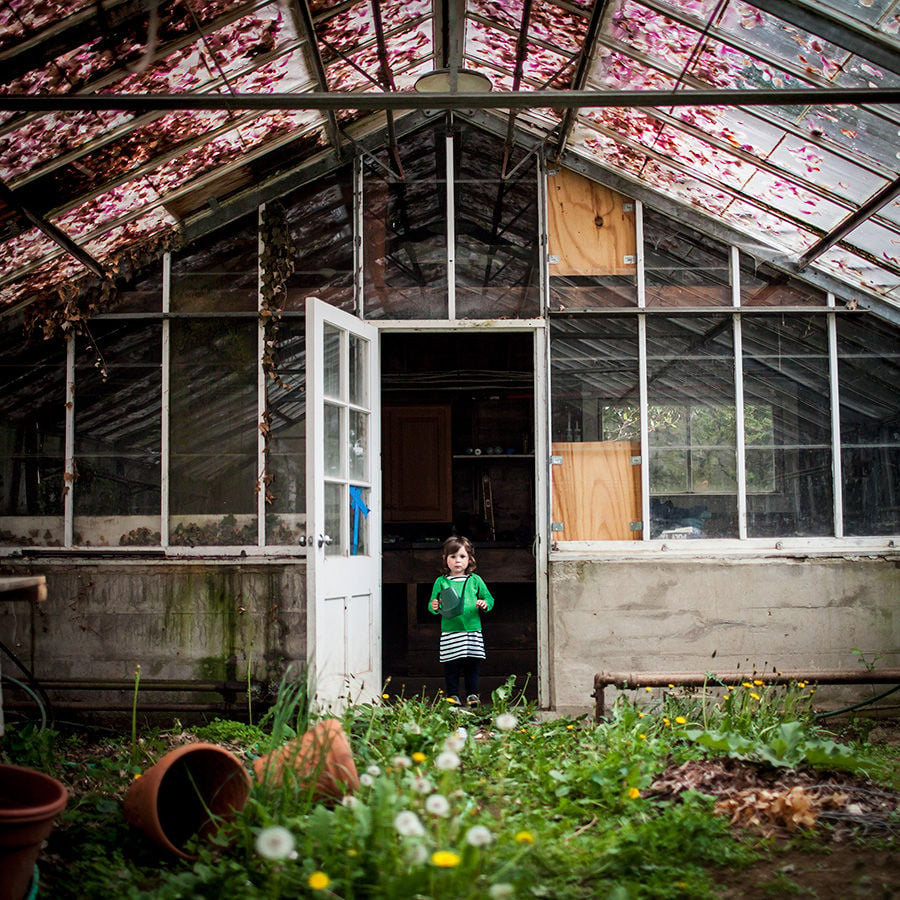 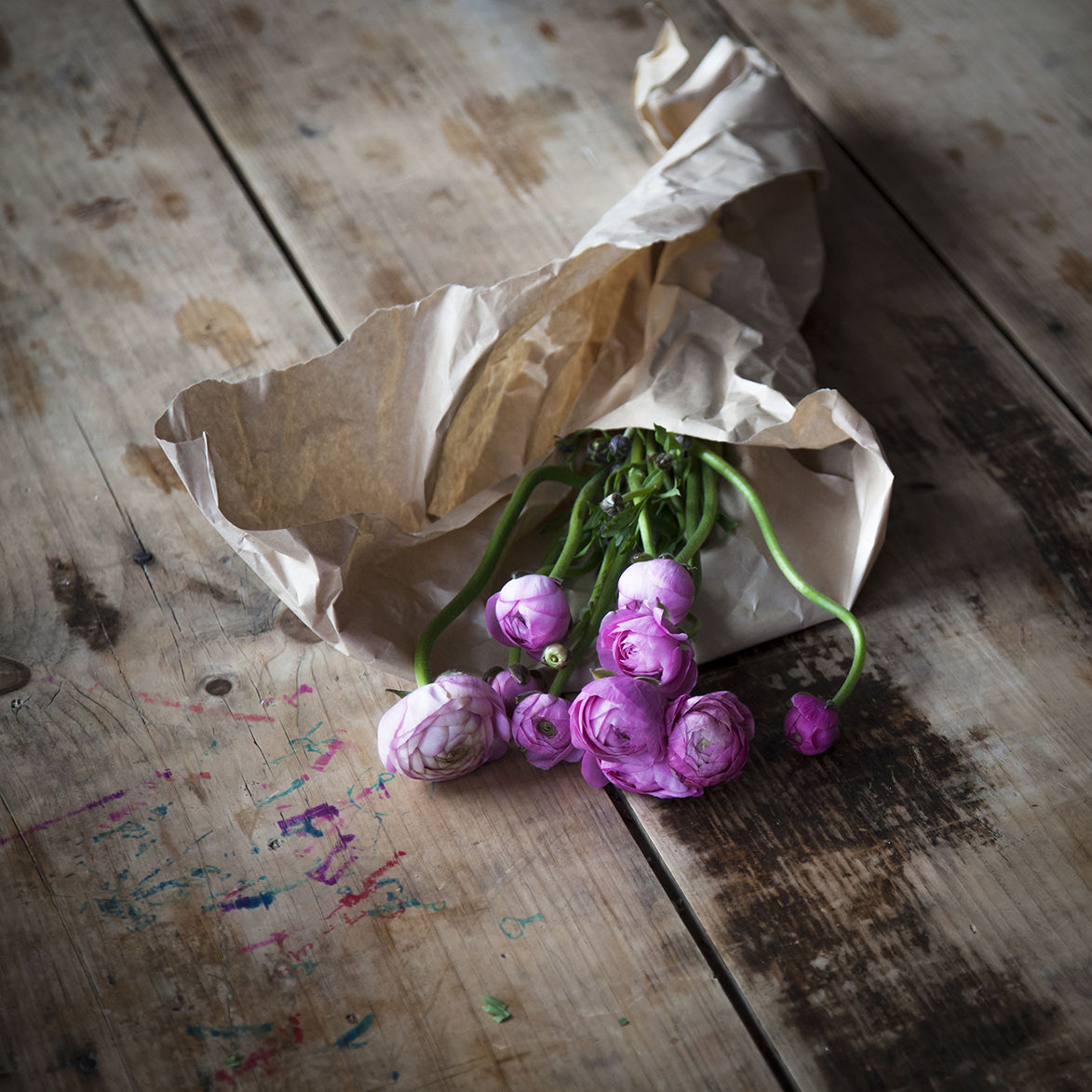 Sometimes a photographic subject presents itself when the photographer isn’t looking for it: a glimpse of youth behind a windshield, seen through the reflected imagery of trees and dappled sunlight; a dog at rest among garden poppies. At other times, a composition is constructed, staged with props, lighting, and an arrangement of figures and objects like a tableau. Still lifes and portraits are sometimes closely related, the eye of the photographer attuned to see them as a camera sees them — with fetishistic attraction, drawn by color, texture, a linear curve, a lovely face, a stately object. Photographer Cig Harvey can take any sight, whether candid or staged, and invest it with momentum, not just capturing what takes place in front of the lens, but also grasping a deeper sense of narrative or meaning.

Her work, on view at Photo-eye Gallery in the exhibit Gardening at Night, pulls from different genres and styles — including composed portraiture and narrative scenes, still-life and landscape photography — and her photos evoke a glamour and a mystique. “I’ve always been drawn to magical realism in literature, ever since I was a teenager,” Harvey told Pasatiempo. “I really seek out that in my photographs. I’m always waiting for something that exists in the real world but is somewhat surprising or that makes me gasp. I’m spending every day trying to find that around me. If I don’t find it, then I look for ways I can help make it.”

Magical realism takes as a given the presence of magic in the everyday, rational world. Harvey isn’t a fantasist. There is nothing out of the ordinary in the subjects she shoots, but the magic is there in the atmospheric surroundings of a central figure, in a gesture, or in the object a figure holds in his or her hand. Devin and the Fireflies (2010), for instance, depicts a girl in a field of fireflies, holding in her hands a small birdhouse, which becomes a kind of mystery object in the context of the rest of the composition. “I’m interested in this idea of objects with meaning, of sort of holding a potency,” she said. “Sometimes a gaze will be the thing that stops me, and other times there’ll be an object that just haunts me, whether it’s the color or its look or its patina or something, and I know I have to take a picture with it.”

Gardening at Night is the Maine-based photographer’s first exhibit at Photo-eye, but she’s been visiting regularly for a decade or more to teach an annual class at the Santa Fe Photographic Workshops. “I always take my students to the Photo-eye Bookstore on the Friday afternoon of the class.” Photo-eye is a goodplace to find a copy of her book, also called Gardening at Night, which is temporarily sold out on Amazon. The exhibition draws from the same series as the book. “The title came from a piece of writing. I’ve always written, and Gardening at Night is a book of photographs and text. It’s sequenced both through seasons and through the ages of my daughter. It came from writing about these Japanese beetles that were eating my roses.”

“ ‘The Japanese beetles came again that night, making and taking their circles of evidence,’ ” she read from the book. “ ‘By middle summer, more holes than leaves, and by September, stripped bare, just roses, stems and thorns. Each morning she stood in the soil counting the holes, a tally of her failures as a mother. She didn’t like that they came when she was sleeping. ‘I need to garden at night,’ she said aloud.’ ” Such text provides a sense of narrative for the body of work but story is also present in the images. For example, The Magician’s Hat (2014) shows a child’s hands holding a velvet top hat aloft, as if he’s showing it off before pulling out a rabbit, or maybe discovering it for the first time as a curious object among a parent’s old things. For Harvey, Gardening at Night has many references, but creating her home in Maine, her family, and having a child are major themes. “The garden became this metaphor for insecurities about motherhood, but it’s also a literal story about these beetles that kept coming at night.”

Another theme that runs through the work is that of relationships. Often, the figures in her images are people she knows intimately: her daughter Scout, for instance, who appears in several photos — including in one as Little Red Riding Hood, almost hidden from view under a red cape and sitting on a deep-red chair.

“Another theme is this element of time. So many of the pictures are sort of trying to stop time and slow time down, grasping at time and its fleeting characteristics.” Included in the exhibit are three digitally animated photographs made using imagery from her photo shoots. “By slowing down one element, they become hypnotic and mesmerizing and surprise in the way they sort of suspend time,” she said. The gallery is showing animated versions of Spring Tree in Fog (2012), the water in the image gently rippling; The Hot Tub, Syd, with steam slowly drifting upwards; and a third showing a young woman among falling orchard blossoms. These animated images, all derived from her photographs, have still components that contrast with the animation, as though the figures are frozen in time while the world around them goes on. “The most important thing is that they don’t just exist as web pieces,” Harvey said. “They exist as actual objects and so they are framed alongside the photographs. Then you start questioning what’s still and what’s moving in the images. They work at any point during the day, but they really come into their own when it starts getting darker.”

Working with different methods to procure an image helps to keep her practice fresh, she said, making her a stronger photographer. “It goes back to that idea that if I’m not finding magic in the world, if magic isn’t presenting itself to me when I’m driving to FedEx, then I’ll go home and make it.” ◀