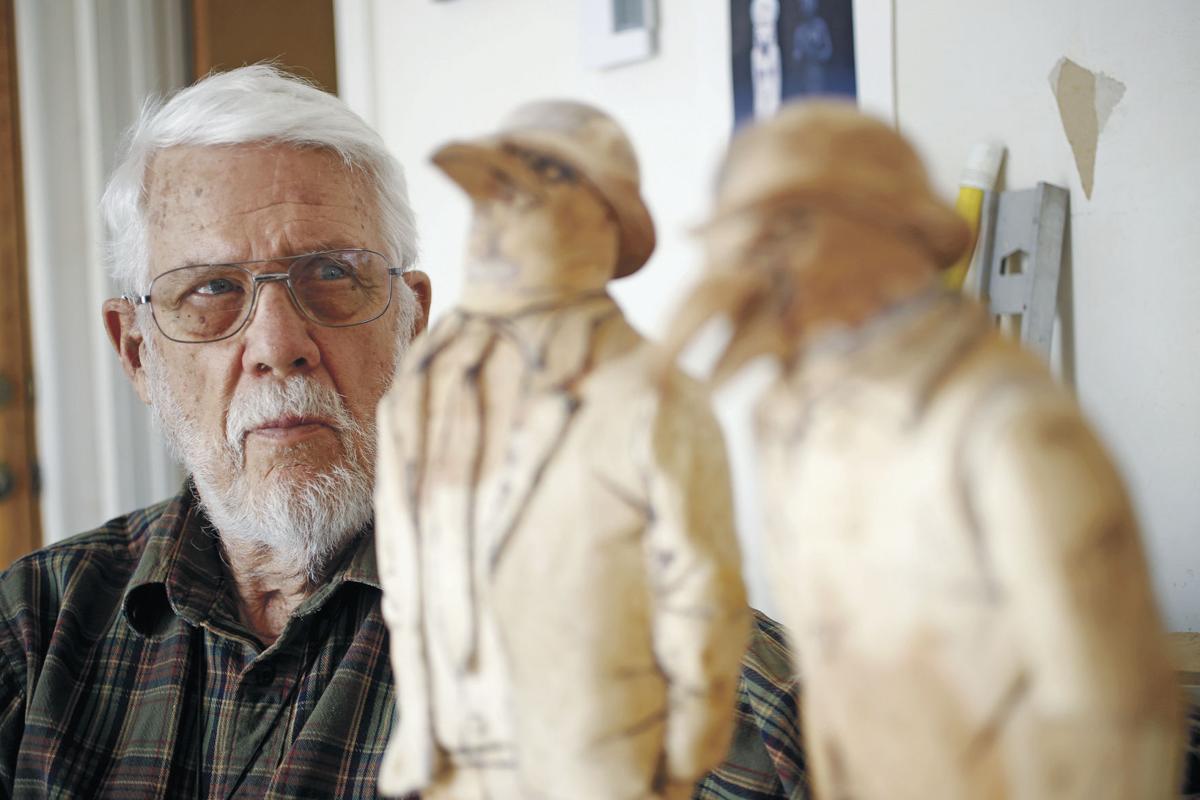 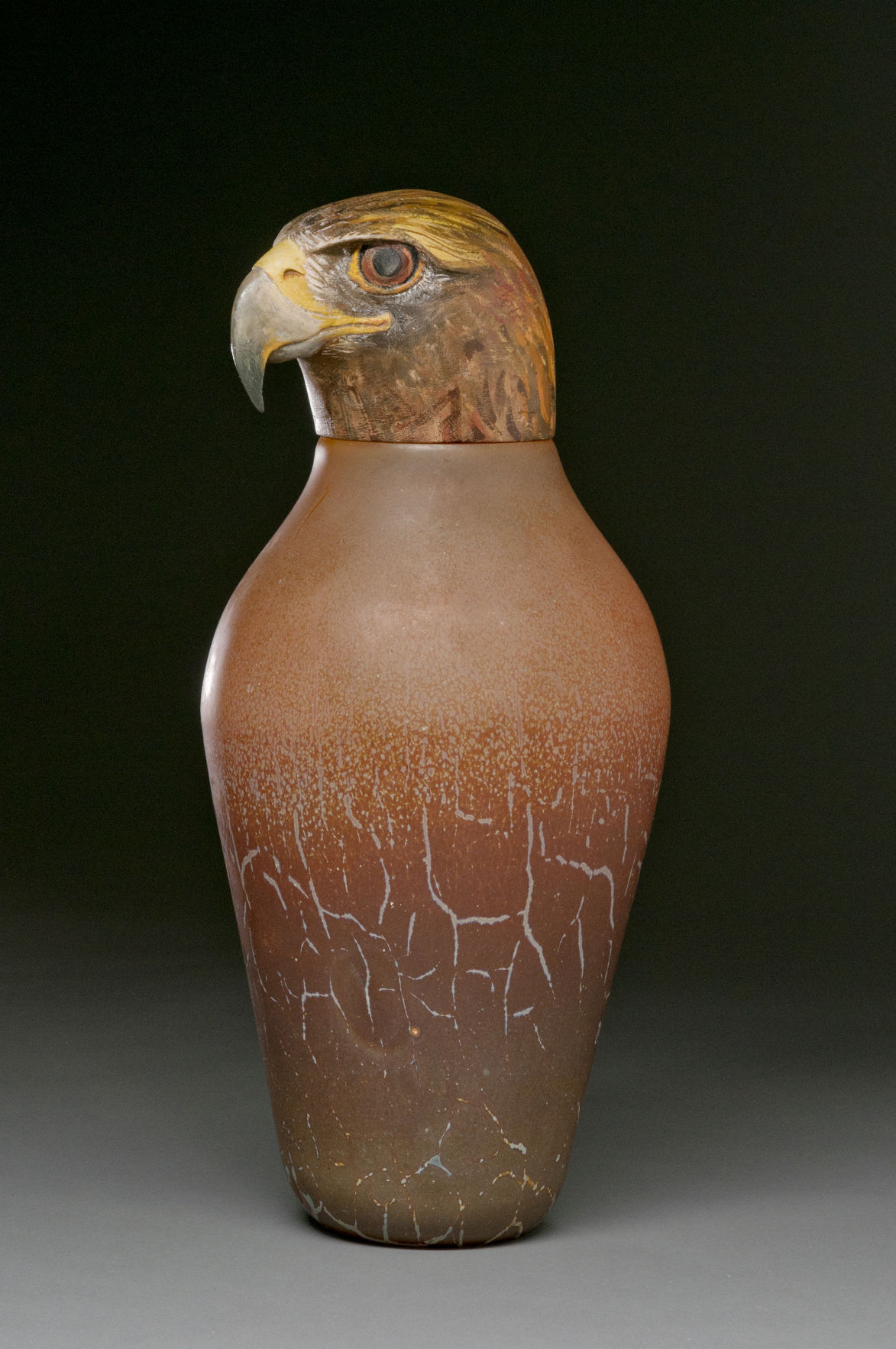 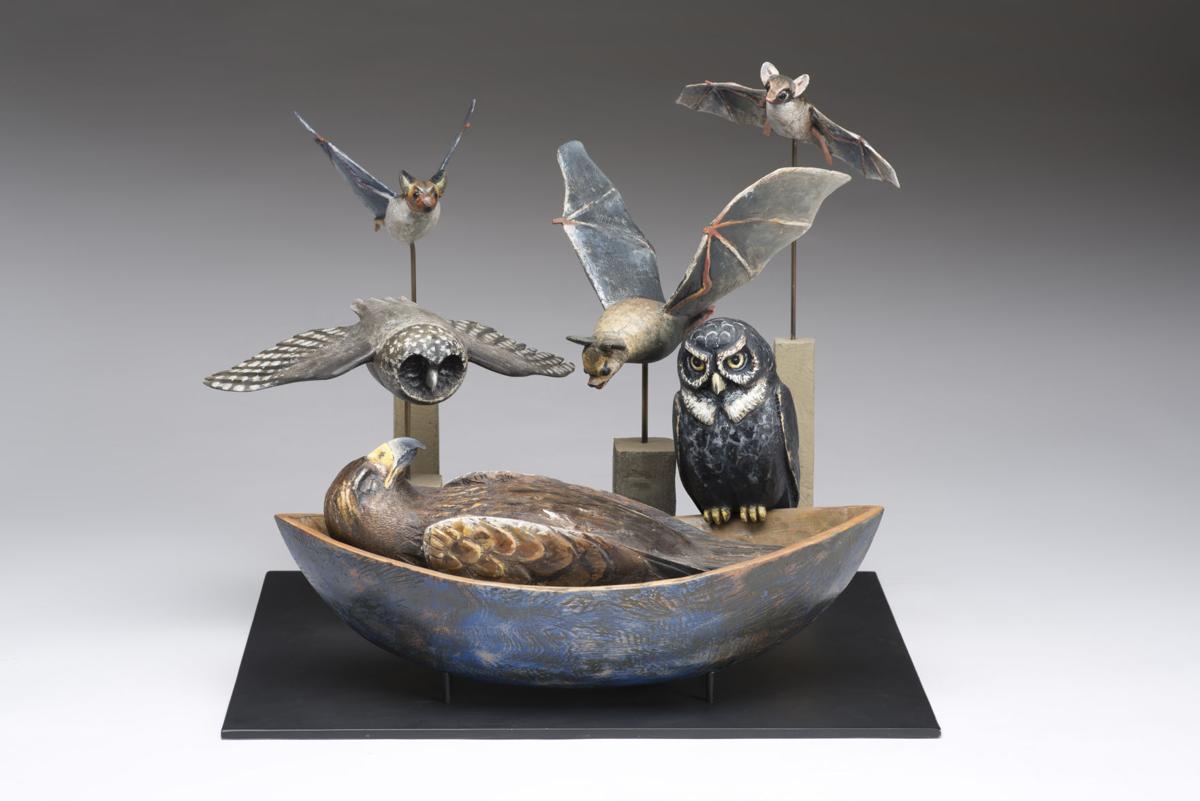 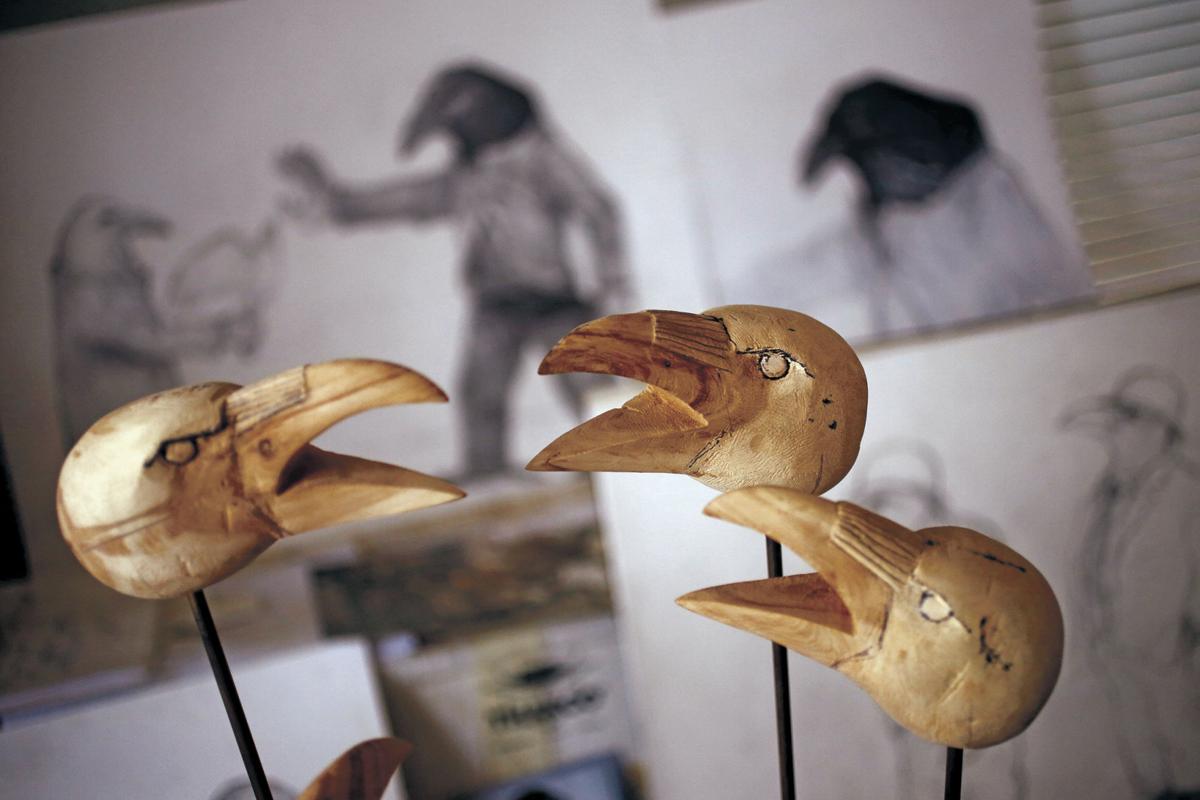 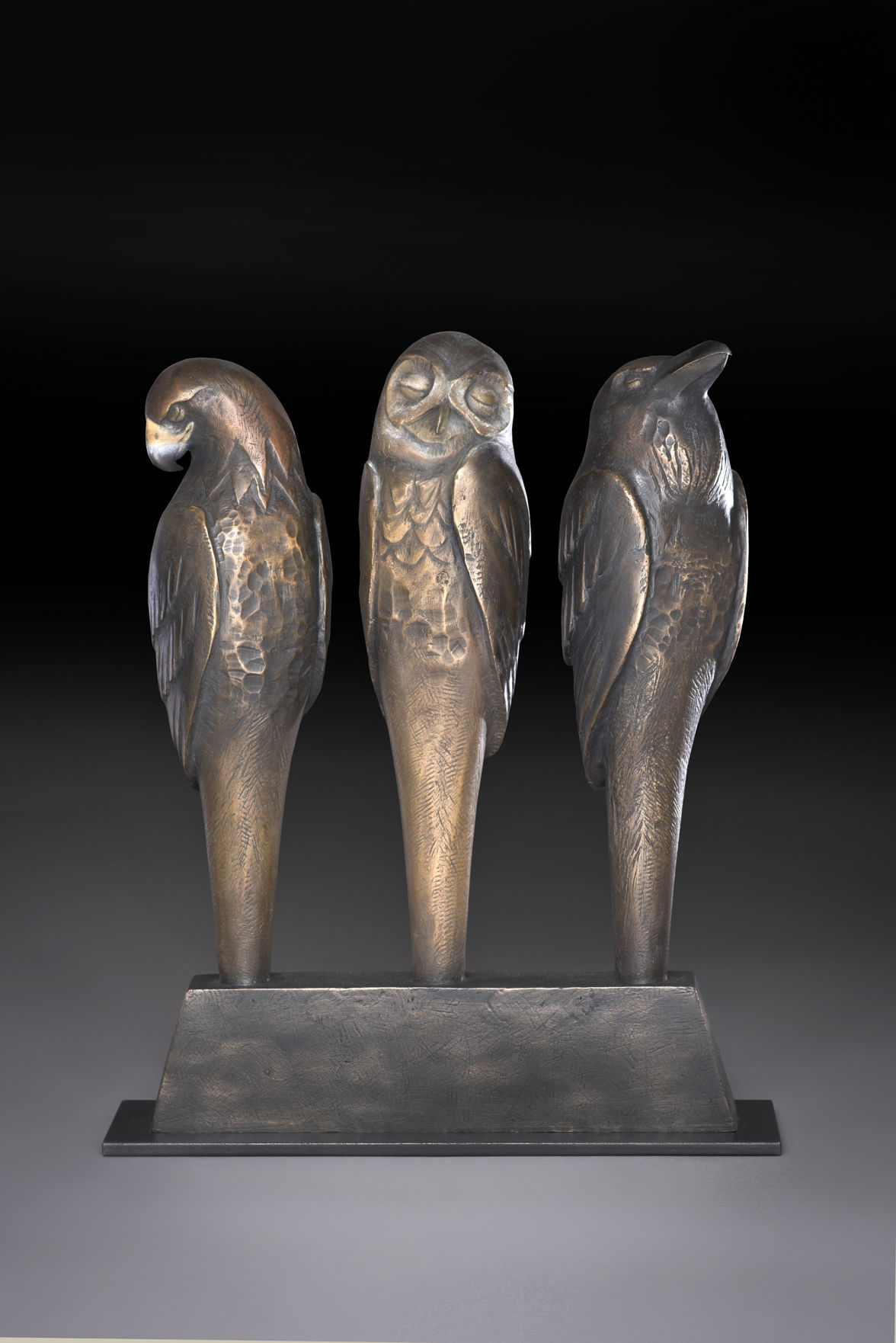 Enter into the province of sculptor Hib Sabin and discover a world of metaphor, allegory, and allusion. It’s a world where every sculpture has a story, a meaning, and a reference — either to mythology, shamanism, literature, or philosophy. “Do you know Beckett’s Waiting for Godot?” Sabin asks, pointing to the two unfinished carvings of bowler-hatted raven heads on the wooden worktable in his Eldorado studio. “Well, there’s Vladimir and Estragon,” he says, naming the two protagonists of Samuel Beckett’s existential tragicomic play.

It’s typical of the 84-year-old sculptor to use animal forms as stand-ins for people. His own self-portrait, a juniper carving called The Aging Artist Contemplates His Reflection (2017), shows Sabin’s wizened head on a stand, staring at a mirror. The reflection staring back at him is that of an owl.

It’s a bright November day. Sabin sits in an uncomfortable-looking plastic folding chair in jeans, a plaid shirt, and a gray vest. The raw scent of fresh-hewn wood fills the air. About two-dozen wood-handled carving tools litter the heavy worktable where Vladimir and Estragon and five other raven heads, their rough forms just beginning to take shape, await the knife.

Propped against the wall are half a dozen drawings, his studies for works that will eventually be carved and painted from alligator juniper or cast in bronze.

One of the drawings depicts two raven-headed human figures, a white one and a slightly larger black one. The white figure offers the black raven a dove, which the black one appears to reject with a protesting wave of its hand. The work is loosely based on Pablo Picasso’s 1935 engraving Minotauromachy, in which the bull-headed monster of Greek myth shuns the light of a young girl’s candle. “I’m doing a whole series of works based on the theme of light and dark, white and black, good and evil,” he says. “To me, that’s the underlying theme of what’s in

Sabin, who shows locally at Manitou Galleries, didn’t start sculpting until he was in his mid-50s, but it has become his primary medium. The work he does now is the culmination of a lifetime of seeking spiritual guidance and truth in some of the world’s most far-flung regions.

He was born Hilbert Speich Sabin in Baltimore to an Episcopalian family, and raised in New Jersey. As an undergrad, he studied art at the University of Pennsylvania and the Pennsylvania Academy of the Fine Arts. He earned a master’s degree in art history from the University of Pittsburgh. Thus began a career as an art history instructor at several colleges throughout Pennsylvania, which lasted until 1970, when he went on sabbatical for an extended period before retiring from the profession completely.

“I went to Mexico and lived there for 3 and a half years,” he says. “I’ve always had a strong spiritual component to my being, but it’s not codified religion. I’ve been interested in Mexico as sort of the underbelly of the beast. Mexico is a Catholic country, but if you dig deep, if you get to know the people in the villages and so forth, it’s still pre-Columbian. Their religious experience, of course, is shamanic.”

In San Miguel de Allende, he got to know the healers — the curanderos and curanderas — of the region. A wood-carver named Angel Valdez was eking out a living selling depictions of santos, or saints, to the tourists. “He came by my door one day with a bag of carved saints. I wasn’t interested in them, but I was interested in the idea that here was a person of the land, of the village, and that he might give me an entrée into that world.”

Learning the shamanic ways of Valdez and his people proved a difficult task. Valdez was suspicious of Sabin, who kept inviting the curandero over for lunch, imploring him to tell his stories. After about 10 lunches together, the man relented and began to recite a story about his grandmother, who had fallen ill. His grandfather instructed Valdez and his nephew to go and fetch a crow out in the countryside. When they returned, his grandfather tied one end of a string to the crow’s foot, and tied the other end to the woman’s sickbed. Every day, he instructed his wife to hold and caress the bird. At the end of two weeks, Valdez said, the crow was dead and the old woman was hale and hearty.

Moved by the story, Sabin asked Valdez to carve him a crow mask. Weeks went by and numerous requests for the carving were made, but Valdez, still cautious about revealing secrets connected to his spiritual practice, produced nothing. Then, at the end of an annual festival, replete with costumed processions, fireworks, dancing in the streets, and heavy drinking, Valdez finally agreed to carve the mask. “For the next three years, we explored this whole world of the pre-Columbian myths, translated down into the stories of the people.”

The crow mask Valdez carved for Sabin hangs on the wall of his studio. Sabin dedicated his recently published monograph, The Other Side of Silence, The Far Side of Time: The Sculpture of Hib Sabin (Unicorn, $30) to the memory of Valdez.

In the early 1980s, Sabin, who was a painter up to that point, left art behind and began a career in international relations. He worked with peace groups in the former Soviet Union and started a sister-city program between Santa Fe and Bukhara, Uzbekistan.

In his academic life, he created a program, funded by the Ford Foundation, to bring student groups to India to study culture and mythology. He also spent time among the Hadza people of Tanzania and the indigenous people of Australia, learning about their spiritual traditions. When the Cold War was over and the Soviet Union fell, he returned to making art.

He called this time his shamanic period, saying it was driven by his direct experiences with the practice

of divination, healing, and communing with the

“He employs his cast of mythic characters — including Raven, Coyote, Eagle, Owl, and Bear — to take part in situations and circumstances that represent the parts of our life journey that matter so much and are spoken of so little,” says Rebecca Blanchard, the co-director of Stonington Gallery in Seattle, which also represents him. “It is as though people are relieved to find someone who is asking and pondering the same questions they are.”

Of the cast of animal characters Blanchard mentions, birds appear to be the most prominent. Owls, eagles, and ravens appear throughout his work, time and time again. He has carved or cast them in the form of masks and placed them atop canopic jar forms (vessels like those used in ancient Egypt during mummification rituals) substituting jackals with raptors, and cast them as the protagonists in narrative scenes. In The Sleep of Reason (2015) an eagle, eyes closed, rests while owls and bats circle it. Each figure is a separate sculpture, all mounted to a single metal base and arranged as a tableau. The piece is an allusion to Francesco Goya’s etching The Sleep of Reason Produces Monsters (circa 1799). Here, the eagle is possibly the symbol of spirit and consciousness. The owls may be harbingers of bad luck or ill health, and the bats omens of death, perhaps.

Many of Sabin’s sculptures are detailed renderings of animals and, sometimes, people. But, whether it’s a stand-alone sculpture of an owl or crow, or the mounted head of a bear or mountain lion, he isn’t going for realism. He’s aiming for something more impactful. They’re mysterious figures with penetrating gazes and, sometimes, dark eyes that render them a little spooky. In his more narrative or allegorical sculptures, they are the surrogates of human experience. “They have an existential presence that gives them weight and meaning and seriousness of purpose,” Blanchard says. “Hib Sabin’s art is experienced rather than seen.”

For Sabin, the ideas keep coming. Reason is awake and aligned with fantasy in a union that Goya described as the “mother of the arts and the origin of their marvels.” Numerous works in progress fill his studio, including a commissioned work for a planned 2020 exhibition at Mockingbird Gallery in Bend, Oregon. He shows no signs of slowing down. “To me, the two lanes to success in life are one, curiosity, and two, passion,” he says. “Here I am at 84, and I’m just now feeling I’m peaking.” ◀

For Sabin, the ideas keep coming. Reason is awake, aligned with fantasy in a union which Goya described as the “mother of the arts and the origin of their marvels.”