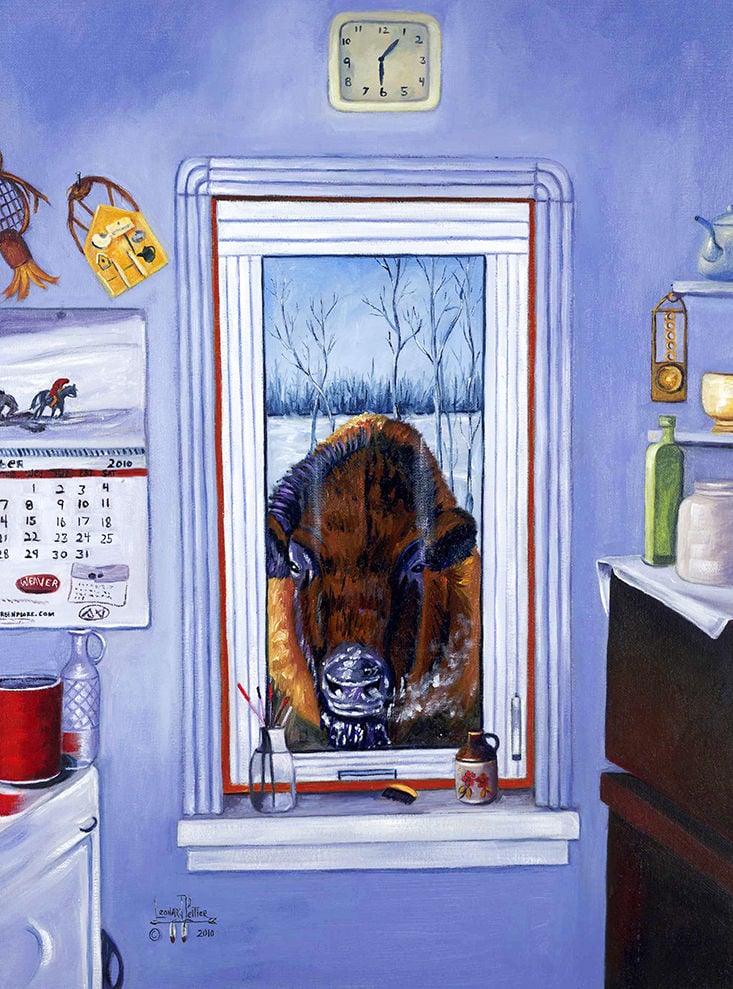 Leonard Peltier: Buffalo in the Window, 2010, oil on canvas 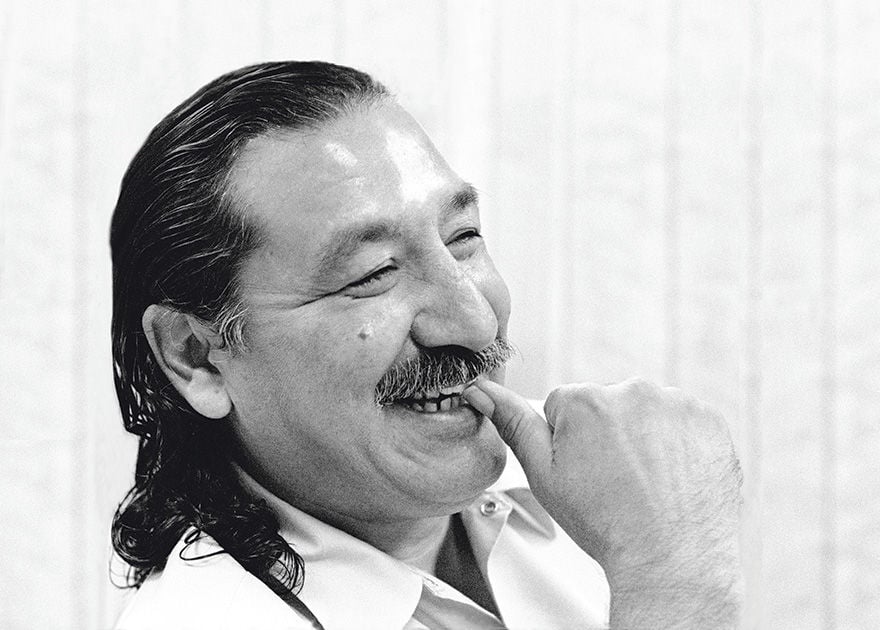 Leonard Peltier: Buffalo in the Window, 2010, oil on canvas

Growing up with a conspicuous last name wasn’t easy for the son of imprisoned Native American activist Leonard Peltier. Chauncey Peltier was just a boy when, in 1975, his father was embroiled in a shootout on the Pine Ridge Indian Reservation in South Dakota that ended the lives of Joe Stuntz, a member of the American Indian Movement (AIM), and two federal agents, Jack R. Coler and Ronald A. Williams. Two years later, Leonard Peltier was sentenced to two consecutive life terms for the agents’ murders, although he and many others maintain his innocence in the crimes. The events leading up to the confrontation, the shootout itself, and the aftermath are covered extensively in author Peter Matthiessen’s provocative account In the Spirit of Crazy Horse, which Chauncey read only recently. “My father, when I was a kid, told me to go out in society and live my own life and stay out of all that, which I did,” Chauncey told Pasatiempo. “I was eight or nine years old when he went into prison. I knew my father. I had stayed with him off and on. He was a good dad, as much as I knew about him.”

Chauncey grew up around Portland, Oregon, working first as a mechanic, then as a logger, then in masonry, and he was involved in a union for nearly 30 years as a hod carrier. But the incident that sent his father to Leavenworth prison in Kansas was a shadow that followed him despite his attempts to distance himself from his father’s circumstances. At the age of seventeen, for instance, Chauncey scuffled with a police officer who asked him how his “cop-killing father” was doing before assaulting the teenager. “After he got done boot-stomping me, he arrested me and threw me in jail. People tell me I should write a book, but I’m more interested in helping my dad right now.”

About a year ago, Chauncey added “art dealer” to his list of occupations when he began managing the sales of his father’s artwork. “When I started, I just got a bunch of art. I didn’t get any resources or supporters or any funds. I had to start from scratch. I had to go all over the country, and I managed to gather up about 60 of his original oil paintings.” Chauncey worked with Portland-based Pearl Printing to create reproduction canvas prints and giclées from the original works, and he started by selling what he could to his friends. “I was just going to do some venue stuff — powwows and events — and raise money.”

Leonard Peltier, a Chippewa Sioux, began painting in the 1980s while in prison. His works show a skill for representational detail in traditional and contem-porary Native-themed works, portraiture, and wildlife art. Peltier is represented by Chauncey at this year’s Indigenous Fine Art Market (Thursday, Aug. 20, through Saturday, Aug. 22) in the Railyard Park; it’s the first time his work has been shown in such a venue. “I’m bringing 25 paintings with me,” Chauncey said. “I’m excited about this. I’m going to try to have some of Dad’s books there and some DVDs. I know it’s an art show, so I’m going to try to stay away from the political stuff; a lot of people are interested in his art. Some people complain my prices are too high. I tell them that every time I visit my father, who’s seventy years old and lives in a max prison, he tells me any day could be his last day. When I tell them that, they get a different attitude about it.”

Leonard Peltier is incarcerated in the high-security unit of the United States Penitentiary Federal Correctional Complex in Coleman, Florida, which is also home to such notorious criminals as James “Whitey” Bulger, former leader of Boston’s Winter Hill Gang. But many in the international community, including Tenzin Gyatso, the 14th Dalai Lama; Nelson Mandela; and Archbishop Desmond Tutu; and human rights organizations such as Amnesty International have supported Peltier and called for his release.

AIM considers Peltier a political prisoner — a claim that’s understandable in light of the organization’s contentious relationship with federal-law enforcement throughout the 1970s on the Pine Ridge Reservation in South Dakota. In 1973, armed AIM activists occupied a village at the site of the 1890 Wounded Knee massacre to support Oglala Sioux dissidents after their failed impeachment of tribal chairman Richard Wilson. For years, Wilson’s private militia — the Guardians of the Oglala Nation, or GOONs — stifled political dissent and bullied his opponents, and AIM activists accused federal agents of reinforcing Wilson’s regime by creating an atmosphere of fear and intimidation on the reservation. Wounded Knee set the stage for the 1975 shootout that involved Peltier.

Chauncey’s days of avoiding the politics surrounding his father’s long incarceration are over. This year, he decided to lead the International Leonard Peltier Defense Committee, working to secure his father’s release through an ongoing campaign. “About three months ago I got appointed director,” he said. “The art is dang near a full-time job for one person as it is. I was always pretty good with manpower, always asked a lot of questions. I always try to stay on the same page as Dad, because when he’s on lockdown, I might have to make a call for him, and that’s a big responsibility. If he ever got out, he’d just want to go to his property in the Dakotas and build a house and a shop, do his art, and work on old muscle cars.”

Chauncey’s new responsibilities have brought father and son closer together. Prison has not been kind to Peltier, who has diabetes and has not seen his grandchildren in several years. Chauncey, too, has been absent from Peltier’s life for long stretches. “I visited him about six months ago. Before that, it was a year, and before that it was 11 years,” he said. “I went to visit him in Leavenworth [the federal penitentiary in Kansas] two times, I think, within a year. Before that, it was actually 25 years. When I go in there and visit my dad, he tells me, ‘Chauncey, I’m seventy years old, and look around here. These guys are all twenty to thirty years old. I can’t defend myself like I used to.’ That scares me. It’s a scary place in there. People tell me that for anybody that’s incarcerated, if they did 40 years, mentally and physically it’s like they did 60, because of the confinement. He tells me if Obama doesn’t let him out, he doesn’t know if he can last another eight years in there, through another president, and all that.”

The defense committee is hoping that President Obama, who commuted the sentences of 46 nonviolent drug offenders in July, will grant Peltier clemency. “It’s looking pretty good,” Chauncey said. “Obama and his wife are both attorneys. This is one of the biggest chances for my father right here. That’s what we’re shooting for.” John Torres Nez, co-founder of IFAM and an advocate for people incarcerated in New Mexico’s prison system, has joined the effort to free Leonard Peltier. “I recently did write another letter asking for clemency, hoping he could actually be in his booth at the market,” Torres Nez told Pasatiempo, “but it seems like we will need to wait for another time.” ◀

Proceeds from the sale of Peltier’s artwork go toward efforts to secure his release.

It was big news in April 2014 when John Torres Nez, Tailinh Agoyo, and Paula Rivera resigned from their positions at the Southwestern Association for Indian Arts (SWAIA), producers of Santa Fe’s Indian Market, and by mid-May, announced plans to launch a new market at the behest of several Native artists. Indigenous Fine Art Market (IFAM) is back for another round in the Railyard. > READ STORY

The Indigenous Fine Art Market — better-known as IFAM — takes place from Thursday, Aug. 20 through Saturday, Aug. 22, in the Railyard. In addition to the three-day art market, there are many associated events, including numerous musical performances. It all begins with the Glow Launch Party at 8 p.m. on Wednesday, Aug. 19, until midnight at the Farmers Market Pavilion. > READ STORY

At this year’s Indigenous Fine Art Market (IFAM), Susan Peebles (Chippewa) is selling paintings and beadwork, artworks in mediums that represent a transition from her formal training as a sculptor. >READ STORY

Nanibaa Beck (Diné) grew up as a “booth baby,” accompanying her parents to art markets and shows around the country. Her father, Victor, has been showing his jewelry at the SWAIA Santa Fe Indian Market for about 40 years, and her mother, Eleanor, began showing her jewelry there a few years ago. > READ STORY

It was big news in April 2014 when John Torres Nez, Tailinh Agoyo, and Paula Rivera resigned from their positions at the Southwestern Association for Indian Arts (SWAIA), producers of Santa Fe’s Indian Market, and by mid-May, announced plans to launch a new market at the behest of several Native artists. Indigenous Fine Art Market (IFAM) is back for another round in the Railyard.