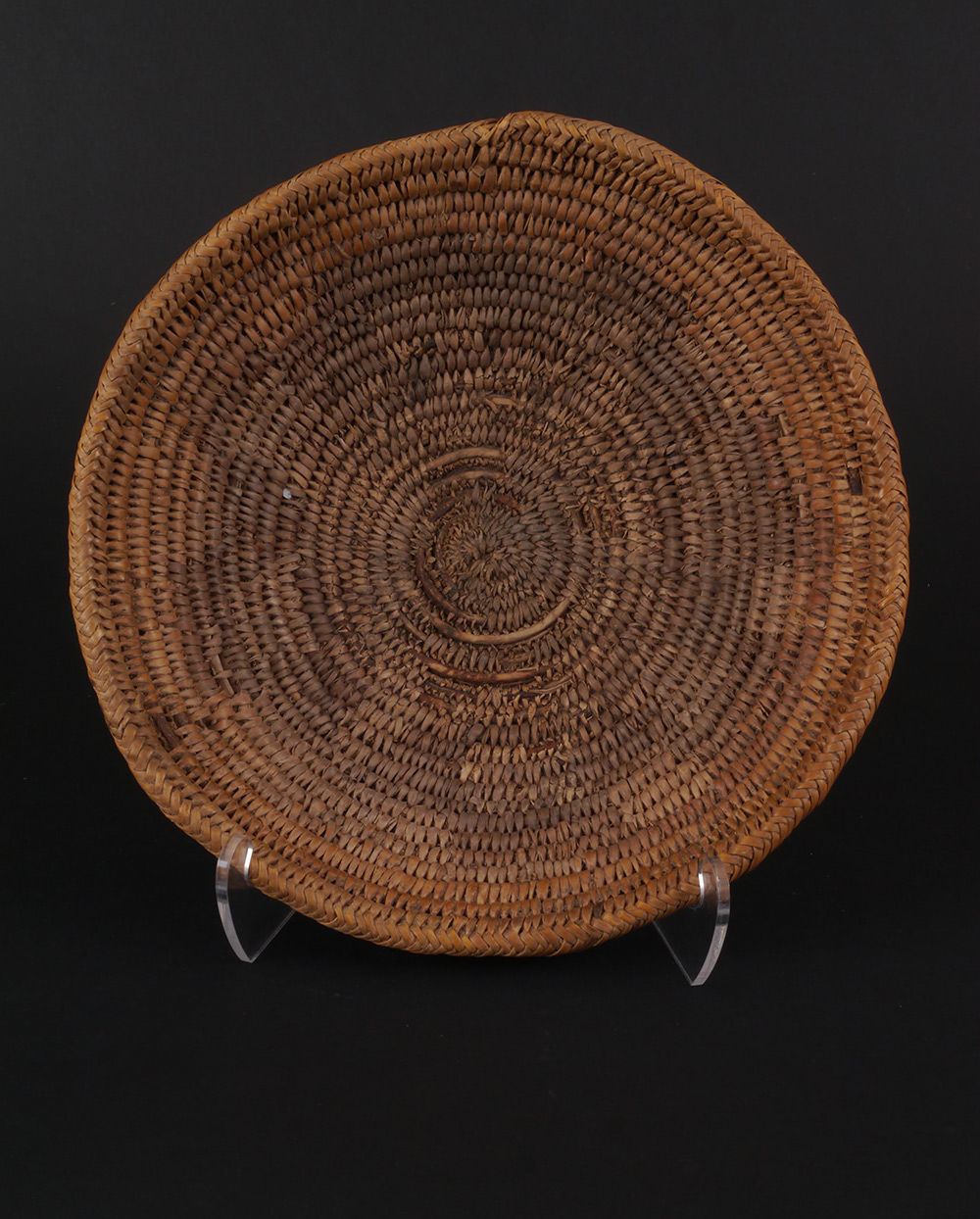 Basketry bowl with patterns in chokecherry-dyed willow, circa 1880; courtesy Wheelwright Museum of the American Indian 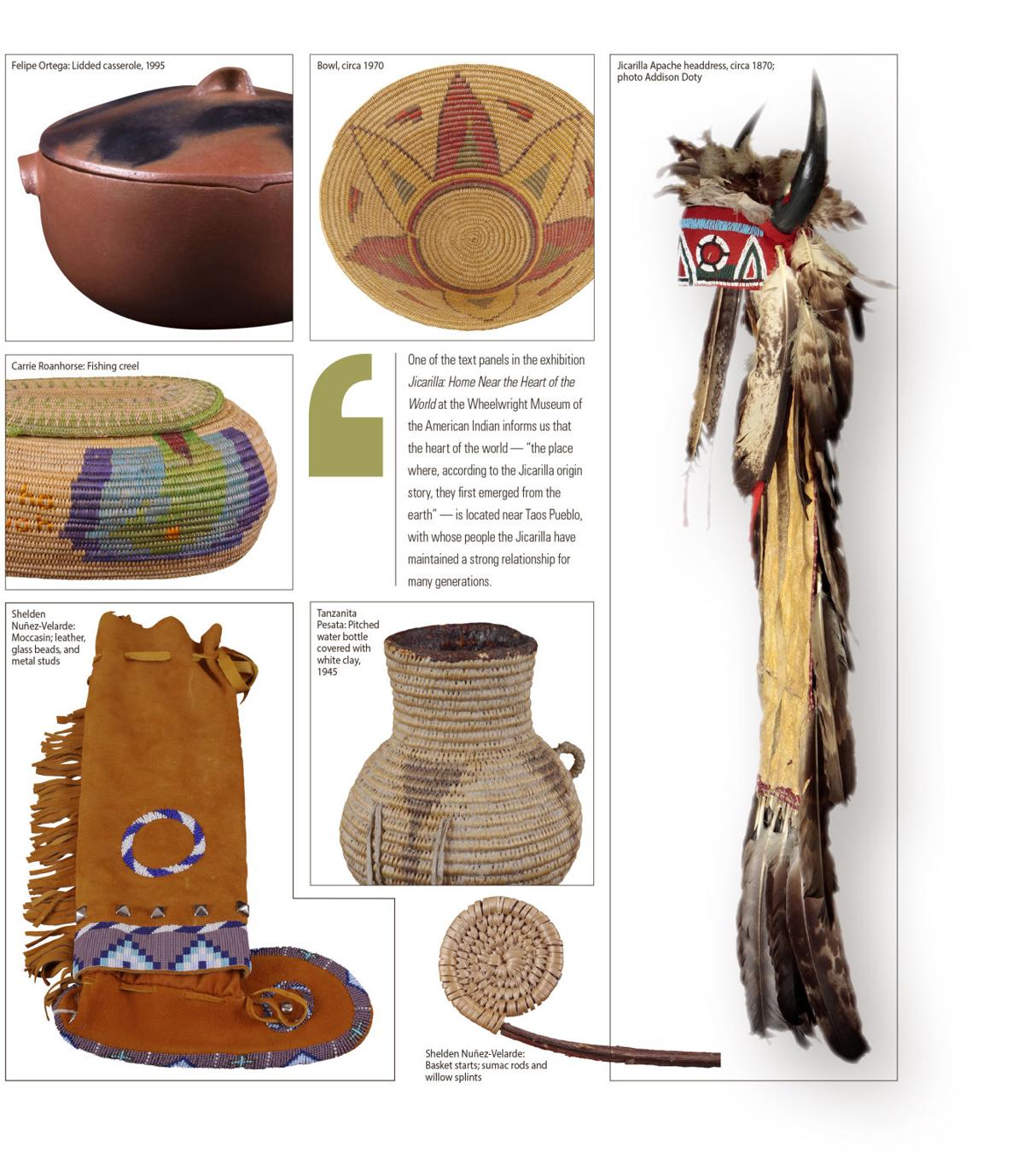 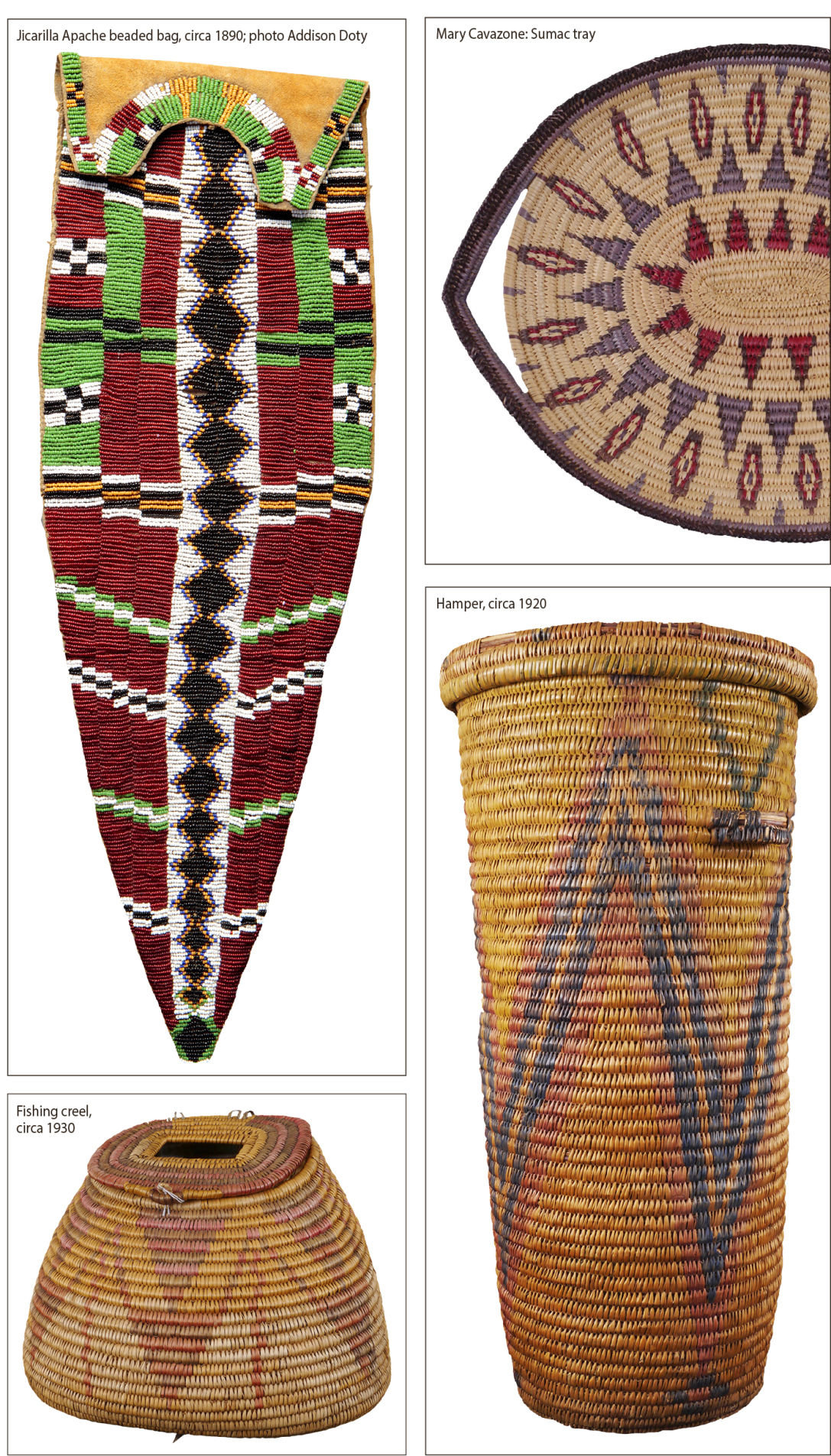 Basketry bowl with patterns in chokecherry-dyed willow, circa 1880; courtesy Wheelwright Museum of the American Indian

The story of the Jicarilla Apache people on the plains more than a thousand miles north of New Mexico dates back at least six centuries. Today they are based in Dulce, about five miles south of the Colorado border, and the Jicarilla Apache Nation extends southward almost to Cuba, New Mexico. But the tribe is rooted at the flanks of the Sangre de Cristo Mountains. One of the text panels in the exhibition Jicarilla: Home Near the Heart of the World at the Wheelwright Museum of the American Indian informs us that the heart of the world — “the place where, according to the Jicarilla origin story, they first emerged from the earth” — is located near Taos Pueblo, with whose people the Jicarilla have maintained a strong relationship for many generations.

There are two bands within the Jicarilla people, the Olleros (the mountain-valley people) and the Llaneros (the plains people). In the 18th century, the Olleros lived in the western part of the Jicarilla territory, from Cimarron to Abiquiú, and were mostly potters and farmers. The Llaneros were buffalo hunters who occupied lands to the east, bordering on the Great Plains. “The community they have today at Dulce is not too far away, and they lobbied to be located in the area,” said exhibition curator Cheri Falkenstien-Doyle. “They were the last people to be settled on a reservation in the United States, and they negotiated for that location.”

The tribal lands are quite far west of the state’s major river, the Río Grande, and a lack of water was a problem. “By the time they were able to move to the reservation area, a lot of homesteading had gone on, so most of the places that had access to good water were taken. Because of the fact that it wasn’t the perfect place for farming, trade in crafts continued to be important.” The 1900 census listed the occupations of 128 women as “basket maker” and another 44 as “bead worker,” which emphasized the importance of the crafts to the tribe’s well-being, Falkenstien-Doyle said, especially because most women were not listed with an occupation in 1900.

By about 1700, when the tribe is first mentioned in Spanish documents, the Jicarilla were renowned traders who obtained corn, beans, melons, squash, and other food and goods from both Pueblo Indians and Hispanic communities in exchange for handcrafted items like those now on display at the Wheelwright: beautiful coiled baskets, colorfully beaded deerskin garments and bags, and glittering micaceous pottery. “There is archaeological evidence that demonstrates that a lot of really big cooking vessels that were in Spanish New Mexican kitchens were actually Jicarilla-made,” the curator said. “Just like at any time, the women equipped their kitchens with the best they could afford.”

The Jicarilla are best known for basketry, but beadwork and pottery remain important to the tribal economy. “Today there’s a lot of effort toward preserving and reviving these crafts,” the curator said, “so what we have in the exhibition is historic material as well as really contemporary material, most of it made by people who are employed by the Arts and Crafts Department of the Jicarilla tribe, which is a tribal enterprise. I believe it’s currently 15 people, and they’re all represented in this show. They go to work every day and make crafts and are paid salaries. I don’t think it’s a huge moneymaker for the tribe; I think the intent is to perpetuate the crafts and make sure that people still know how to do it, and there are young people coming into the program.”

Falkenstien-Doyle said Jicarilla: Home Near the Heart of the World was a group effort with the tribe, preparator Jack Townes, and Jeanne Brako, curator of collections at the Center for Southwest Studies at Fort Lewis College, Durango. “Jeanne and Jack were doing work on the Jicarilla’s tribal center displays, and we started cooking up the idea for the show, and the response from the tribe was so good. As we got into the exhibition, we had people coming in all the way from Dulce giving us advice about the displays. It was terrific.”

The Wheelwright has a good collection of Jicarilla basketry, but much of what’s on view at the museum is from the tribe itself. Hortense Goodman, one of the founders of Goodman’s Department Store in Pagosa Springs, Colorado, amassed a large collection between the 1920s and the 1960s. In 2012, the Jicarillas acquired that collection. Goodman’s assemblage of about 90 baskets is especially valuable because most of the pieces are identified by maker, date of manufacture, and date of purchase.

An introduction to the world of Jicarilla basketry is afforded by a story from 1896, as recounted on an exhibit text panel. Hamlin Garland, a Native-American rights advocate, visited the settlement almost a decade after the Jicarilla Apache Nation was established, only to be disheartened by the poverty he witnessed. But he also wrote that “the women were weaving baskets of willow, and they are capable of doing the most excellent work, too. They pluck the willows at a certain time of year and save them for their spare time when there is no more work to be done on the land.” They could then strip from the branches of willow (and of sumac) the narrow splits and rods used in weaving baskets when time allowed.

It is a skill not easily learned. “The women from the Arts and Crafts Department took us out for a morning of harvesting willow and sumac and showed us how to make this material, using a small knife and your teeth and your hands,” Falkenstien-Doyle said. “We didn’t get it. We did not succeed.”

Many of the baskets on display have a broad, open form and were used “for food-processing and all kinds of things,” the curator said. There are also water bottles, coated inside with pitch. Some of the baskets are dyed with chokecherry, and the weavers alternated the colors of the different materials to create floral and other geometrical patterns. “They were also using bright aniline dyes going back into the 1800s, and now they’re faded back into lovely, subtle colors.” In the 20th century, weavers began producing a wider variety of baskets — including hampers, fishing creels, and even waste baskets — for sale to tourists and visitors.

The beadwork on display from the Goodman collection includes a girl’s fringed dress and a man’s Plains-style shirt. Conelia Velarde made the shirt with loomed and lazy-stitch beadwork in about 1910 for one of her young sons. The deer-hide dress is by Lesao Garcia Velarde. “One of her descendants is Shelden Nuñez-Velarde, who is a young contemporary beadworker/potter/basketmaker. He was one of the people who helped us a lot with the exhibition. He’s very interested in the preservation and continuation of the tribal arts. That’s his great-grandma’s dress,” Falkenstien-Doyle said.

A girl’s fringed dress and cape signify her transition into womanhood and would typically be worn at her keesta, or “coming out” ceremony, during which she is associated with the Jicarilla progenitor White Shell Woman, according to an exhibition text panel. “Even today, the cape is a strong indicator of a Jicarilla woman’s identity,” Falkenstien-Doyle said. She added that the dress type is reminiscent of what is worn by women of the Northern Plains and Plateau area (western Montana, Washington, and British Columbia), revealing the breadth of historic Jicarilla trade relationships. The exhibit cases also hold beaded bags and moccasins that were collected in the late 19th century by Margaret J. Voorhees, a merchant who did business east of Dulce.

Among the Wheelwright show’s pottery displays are a micaceous clay casserole by Felipe Ortega (on loan from the Museum of Indian Arts & Culture/Laboratory of Anthropology); a free-form pot by Emanuel Vigil; vessels of various types by Lydia, Molly, and Tanzanita Pesata; and recent pieces — a water jar and a handled pitcher — by Nuñez-Velarde.

Falkenstien-Doyle explained the preponderance of the micaceous-clay material in Jicarilla pottery, and in that of other tribes. “There are micaceous clay beds that are used by the Jicarilla and also by Picuris, Taos, and others. It has that nice sparkly appearance. It’s really, really good for cookware, and it’s still being made for that purpose. Beans are supposed to be really good when made in micaceous pottery.

“There was a young [Hispano] guy selling micaceous pottery at Spanish Market, and I heard someone ask him if he has a studio and he said he shares a studio with Felipe Ortega, who has a wonderful lidded casserole in our show. So this is a medium that goes across boundaries in New Mexico.” ◀

A place to shine: The Phillips Center for the Study of Southwestern Jewelry

A considered perusal of the Wheelwright Museum’s new Jim and Lauris Phillips Center for the Study of Southwestern Jewelry is a remarkable journey. The variety and creativity of the work is fascinating, as are the tales told in the roughly chronological sequence of cases. > READ STORY