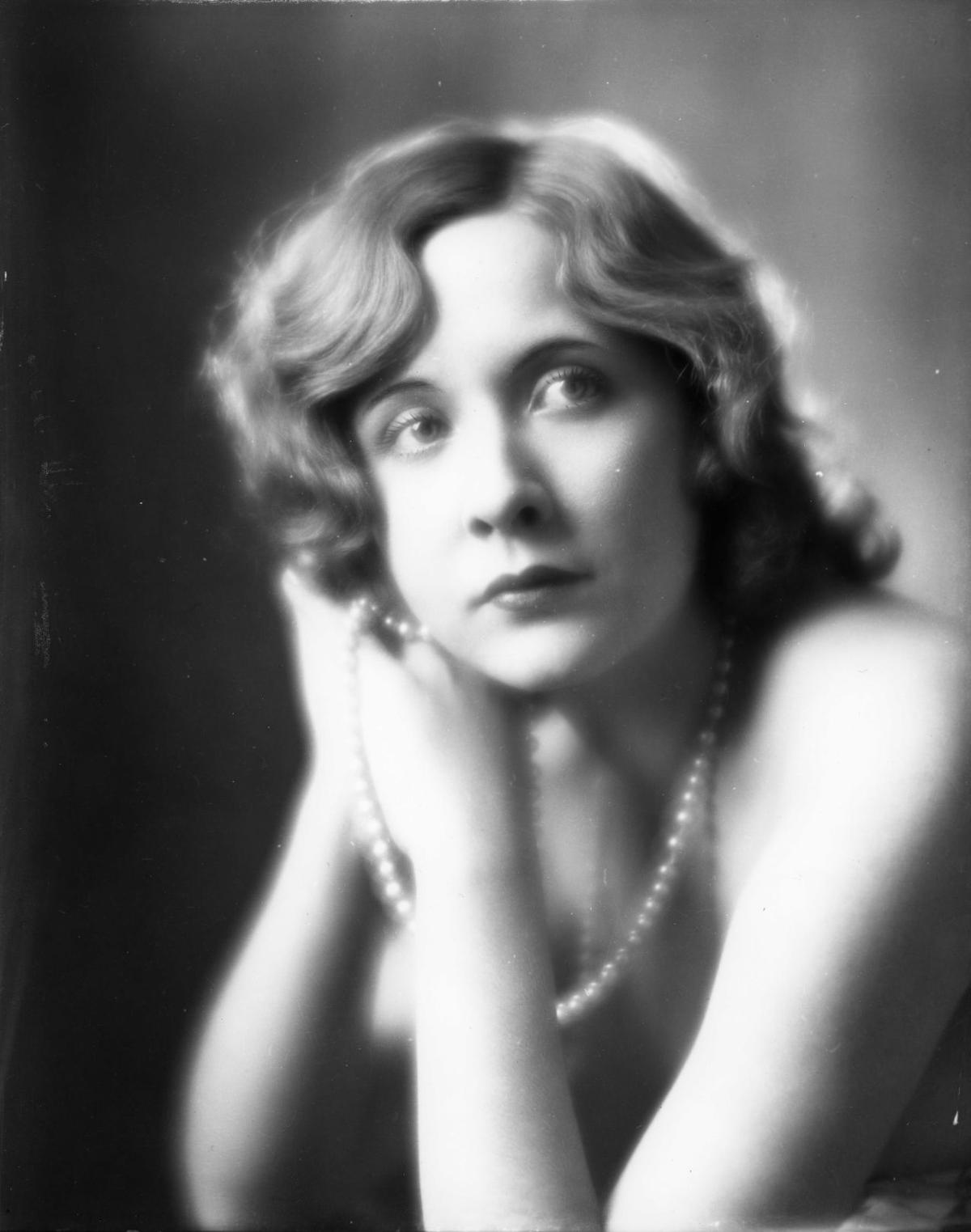 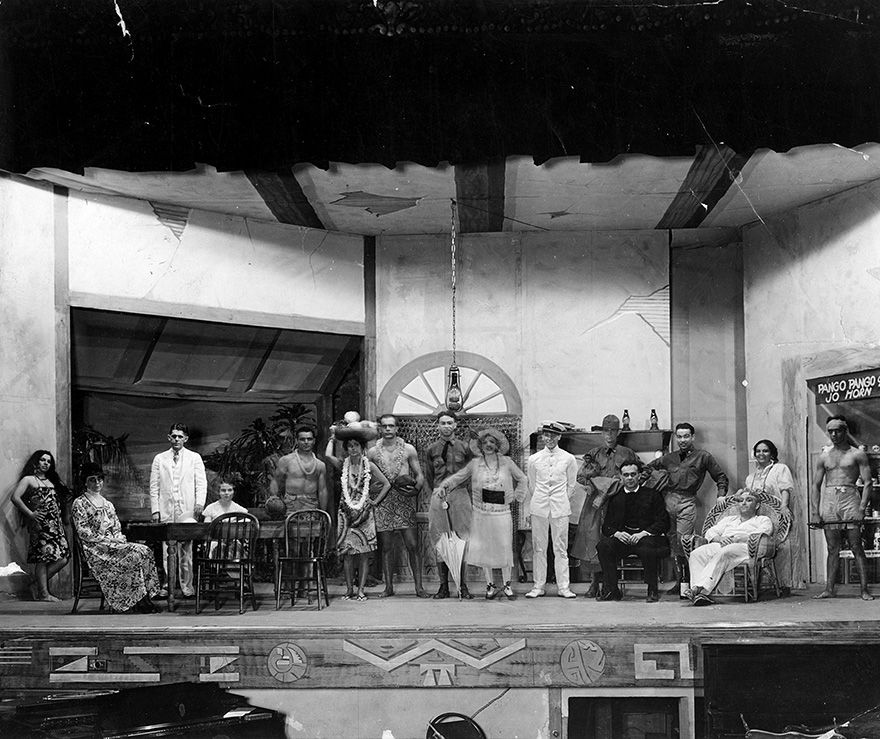 Vivian Vance, left, in a production of Rain at the KiMo Theatre, 1931; courtesy Lou Ann Graham and the Albuquerque Museum 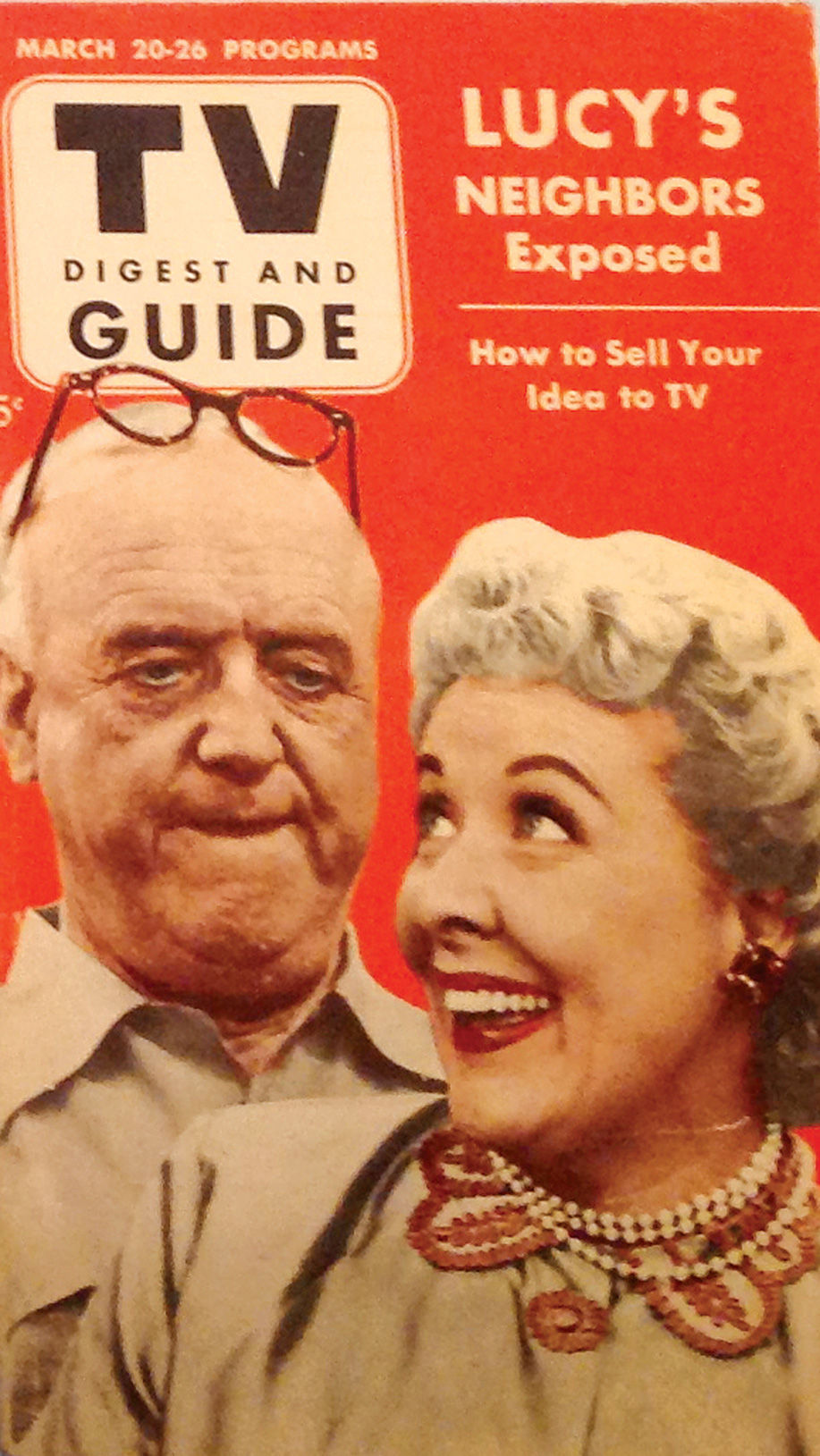 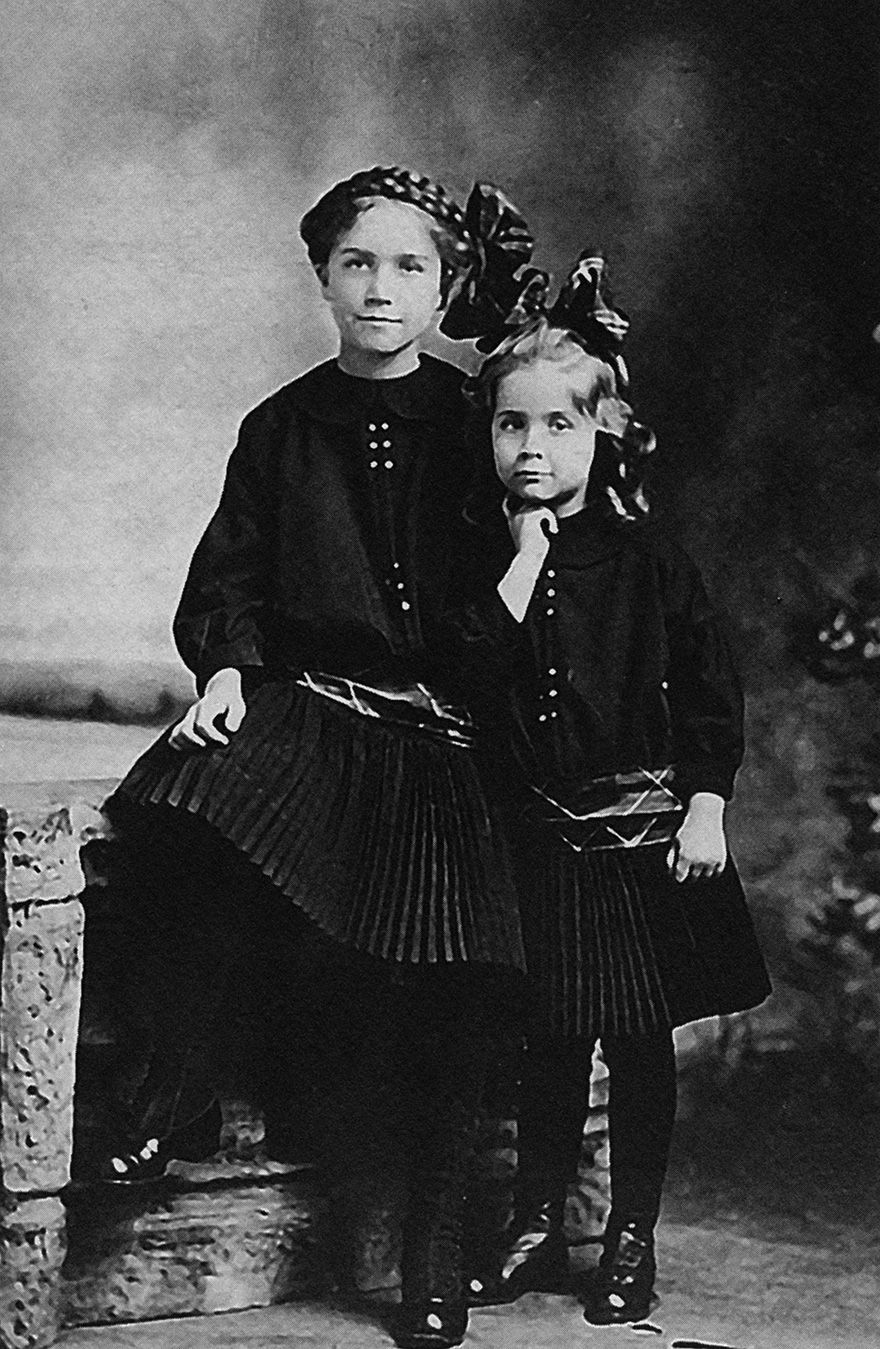 Vivian Vance, left, in a production of Rain at the KiMo Theatre, 1931; courtesy Lou Ann Graham and the Albuquerque Museum

It is Jan. 31, 1955 — a Monday night — and in this evening’s installment of I Love Lucy, Ricky and Lucy and Fred and Ethel are in the midst of a road trip to Los Angeles, where Ricky is to make a movie. Their route (66, of course) leads the funny foursome right through Albuquerque, and that raises the unusual possibility of placing Ethel at the center of the action in an episode titled “Ethel’s Home Town.” Inasmuch as the television series I Love Lucy was fictional to the core, Ethel Mertz could have been from anywhere. But the actress who portrayed her, the imitable Vivian Vance, really was a product of Albuquerque, a happenstance that has given rise to the exhibition Everybody’s Neighbor: Vivian Vance, on view through Feb. 1 at the Albuquerque Museum.

The gist of the episode is that the denizens of the Duke City are under the impression that it is their native daughter who is going to be starring in the Hollywood movie, and Ethel, swept up in the admiration, does nothing to disabuse them of that misconception. Pressed by a reporter to relate her life story, she takes a deep breath and basks in her unaccustomed moment in the spotlight: “My Story, by Ethel Mae Potter,” she begins, using her presumed maiden name, essentially dictating to the star-struck reporter. “You people who remained here in this lovely, quiet, peaceful town of Albuquerque, leading your dreary, uneventful lives, little do you know the heartache, the heartbreak, the hard work, the frustration that I went through to get where I am today. When I was a small tot, playing around the yard of the Albuquerque Grammar School, little did I know that I was destined to become the star of three continents.” The reporter proposes taking her on a tour of the places of her youth, photographing her at the schoolyard, behind the counter of her father’s grocery shop, posing “with a big close-up shot of the Little Theatre marquee,” where she had gotten her start as an actress. By the end of the show, ruffled feathers are smoothed and the others join Ethel at that very theater for a vaudeville routine in which Ethel sings “Short’nin’ Bread” plus the song “My Hero” from Oscar Straus’ operetta The Chocolate Soldier, while havoc reigns in the background.

In fact, Vance was not a native of the city. She was born Vivian Roberta Jones on July 26, 1909, in Cherryvale, Kansas, and her family moved to Albuquerque only in 1928, in hopes that the climate would prove beneficial for her asthmatic mother. While working as a model for a dressmaker, Vivian found an outlet for her theatrical proclivities by performing in weekend vaudeville shows at the KiMo Theatre. At just that time a professional actress named Kathryn Kennedy O’Connor arrived in town from New York, seeking respite from tuberculosis, and she convinced various movers and shakers to support her in founding the Albuquerque Little Theatre. Vance (the stage name was assumed at that time) got in on the ground floor; the exhibition includes a photo of her in costume for an unidentified production there in 1930, which was its first season. O’Connor recognized the young actress’s potential and sent her to New York to study with Eva Le Gallienne.

Vance was not yet ready for the big time. Her first audition in New York earned this response: “May we suggest you immediately return home.” She proved persistent, snagging chorus parts and then supporting roles, finally graduating to a name on the marquee. A photo in the show has her posing onstage with Jimmy Durante, Ethel Merman, and Bob Hope for the initial production of Cole Porter’s Red, Hot, and Blue in 1936; the previous year, she had been Merman’s understudy in the same composer’s Anything Goes. “I always tell a beginner to stand in the wings when you come offstage, watch and learn from top stars,” Vance later said. “Incorporate what they do; make it your own.” By 1939, her headshot graces the cover of the Playbill for Skylark, a comedy by Samson Raphaelson in which she played a supporting role to the British actress Gertrude Lawrence. That production was launched on Oct. 11, 1939, at the Morosco Theatre on West 45th Street. Exactly one week later audiences streamed to the opening, just down the block at the Imperial Theatre, of the Rodgers and Hart musical Too Many Girls, which served as the breakthrough for an emerging actor and nightclub performer named Desi Arnaz. The next year he would cement his fame in the film version of that musical, which included in its cast a B-movie starlet by the name of Lucille Ball.

In 1951, Vance was appearing at the La Jolla Playhouse in San Diego in the lead of John Van Druten’s The Voice of the Turtle, a piece that was hugely popular in its day but has been largely ignored since. Arnaz went to see her performance and invited her to audition for a TV show he was producing, a comedy series that would star Ball, who in the meantime had become his wife. It struck Vance as a harebrained idea. “Take a full-time job in a medium that didn’t amount to anything?” she recalled. “The strain involved wasn’t worth it. Besides, what could it lead to? No series anything like this I Love Lucy had been successful so far.” But she and Ball got along well when they met, and … oh, why not? The series took to the airwaves that October and ran through 1957, after which its extraordinary success was prolonged for two more years through TV specials. In 1954, Vance was awarded the first-ever Emmy award in the category of Best Supporting Actress for her work as Lucy’s congenial sidekick, and she received three further nominations in the same category.

Although Vance enjoyed a relatively broad and variegated theatrical career, she is first and foremost Ethel Mertz in the minds of her fans. Curiously, the exhibit at the Albuquerque Museum seems intent on playing down that aspect of her career. Perhaps that is understandable to the extent that she was sometimes frustrated when people viewed her only as a slightly dowdy housewife, but the show doesn’t offer much else to fill the gap. It is a rather spare exhibition, consisting of perhaps 75 artifacts: photos, memorabilia, personal effects, a comb she wore when playing vaudeville in the ’30s, and a fur stole she wore for a portrait in the ’50s (which is conveniently displayed near the portrait itself). A 1950s TV sits in the middle of the room, and it seems strange that it is not playing excerpts from I Love Lucy, at least sporadically. Next to it sits a trophy, the 21st Annual Hall of Fame Award given long posthumously by the Academy of Television Arts and Sciences in March 2012, but where is that Emmy statuette Vance snagged in 1954? Well, after Vance died in 1979, of bone cancer, her family gave it to the Albuquerque Little Theatre, where it’s on display in the lobby — a half-mile distant from the Albuquerque Museum. Could the loan of that central artifact not have been arranged for the brief run of the exhibition?

Other omissions are easily as regrettable. The show seems to want to take the form of a biography, but it leaves out the less-than-happy parts. Different husbands slip past, although the presentation never clarifies that there were four of them over the years. She seems to have lived in an awful lot of residences, but it’s never spelled out when or why she moves from here to there. We see her with husband number three, actor Philip Ober, on a USO tour in Algeria and Italy, and we glimpse them in a small adobe ranch home they built in Cubero, between Laguna Pueblo and Grants, New Mexico. We are not told that their marriage ended in 1959 amid allegations of spousal abuse, a divorce that required Vance to hand over half her I Love Lucy earnings. The exhibition breathes nary a word about the fact that Vance was not on warm terms with her co-star William Frawley (Fred Mertz), and it is too hands-off to repeat the tale about how, when she received word of his death while dining at a restaurant, she reputedly proclaimed, “Champagne for everyone!” At the least, her relationship with Frawley was interesting enough that it might merit some citation in a show dedicated to presenting her life. No mention is made of the fact that Vance struggled with psychological issues for years, that she spent many hours on a psychiatrist’s couch at a time when that was not very common, and that she became an advocate for mental-health causes.

Even her later links to New Mexico are treated without much detail. We are told she had a home in Santa Fe for a while, although visitors are left to wonder precisely where. (Indeed, her fourth marriage, to publisher John Dodds, took place at the home of some Santa Fe friends, Bill and Barbara Hooton.) A caption says she was active with the Santa Fe Opera and the New Mexico Heart Association. The displays include a San Juan Deer Dance plate she owned, made in 1955, and the reproduction of a 1958 New Mexican photo spread titled “TV Actress Visits Pojoaque.” When all is said and done, Everybody’s Neighbor: Vivian Vance leaves visitors not very entertained, marginally enlightened, and generally frustrated by its refusal to countenance some of the more challenging aspects of her life and its strange insistence on downplaying the role that made Vance immortal. ◀