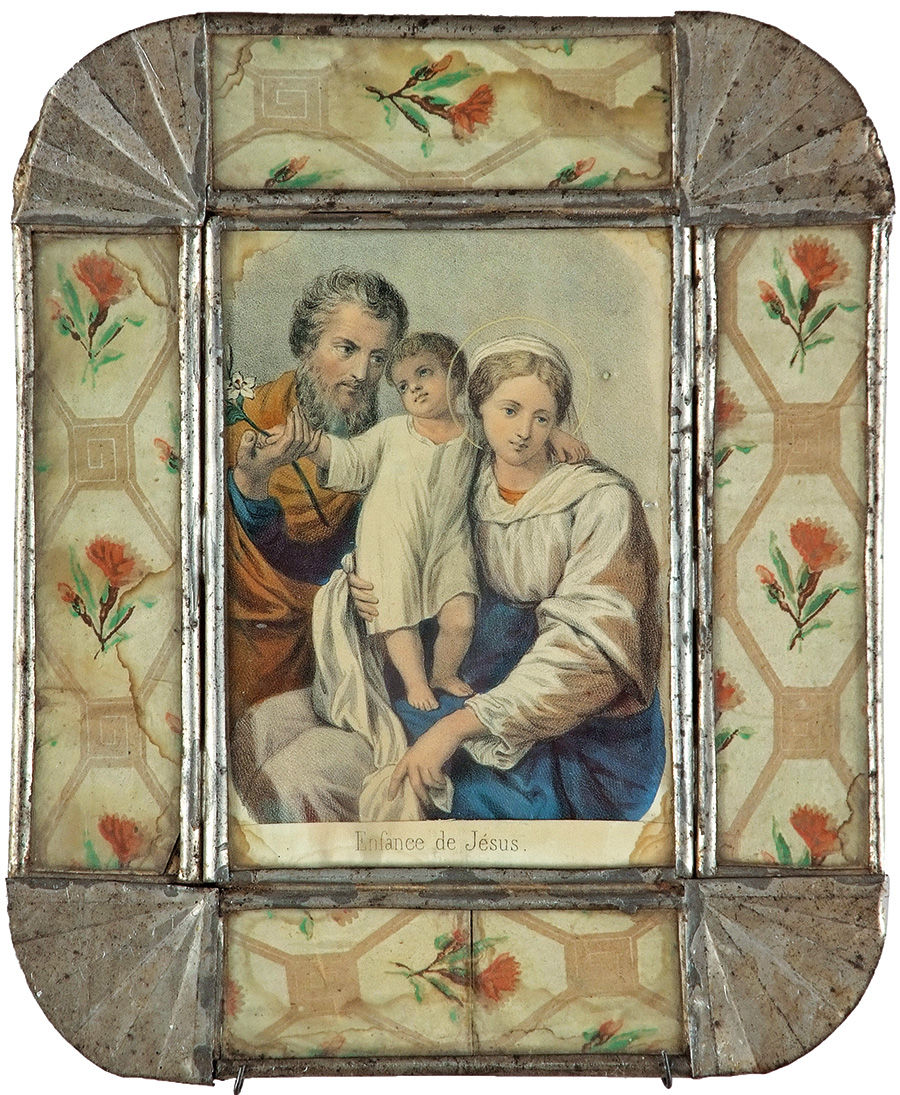 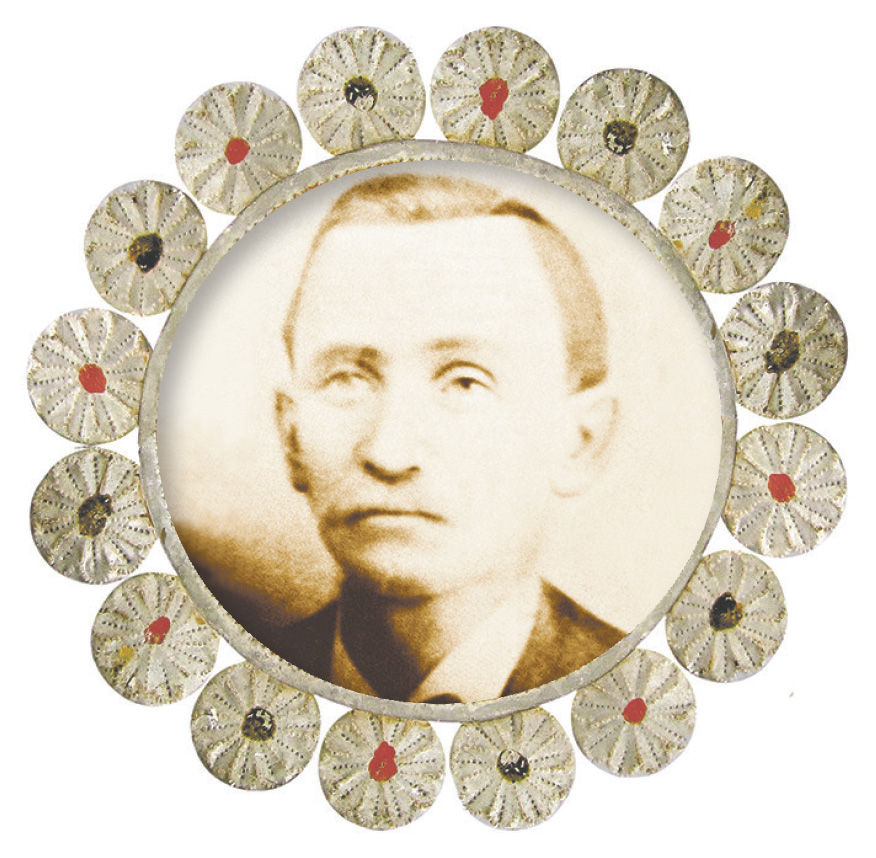 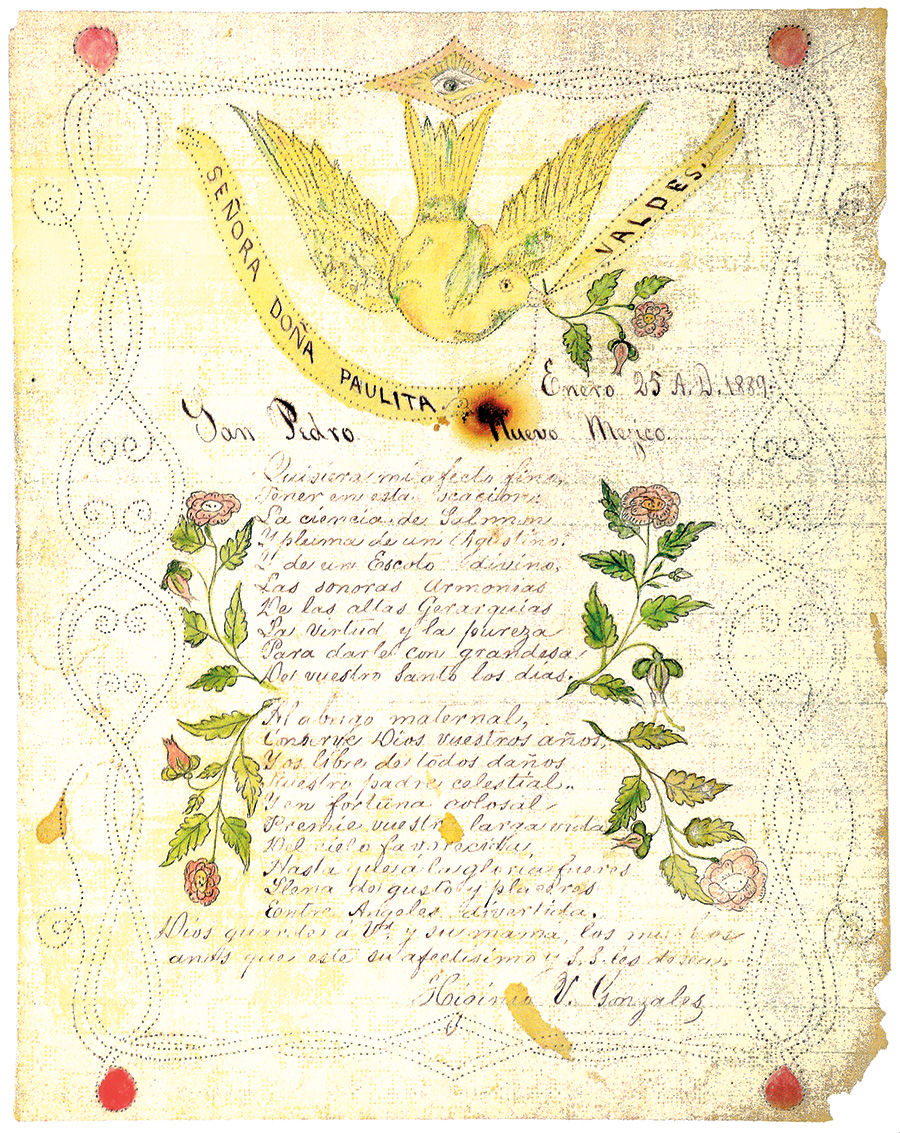 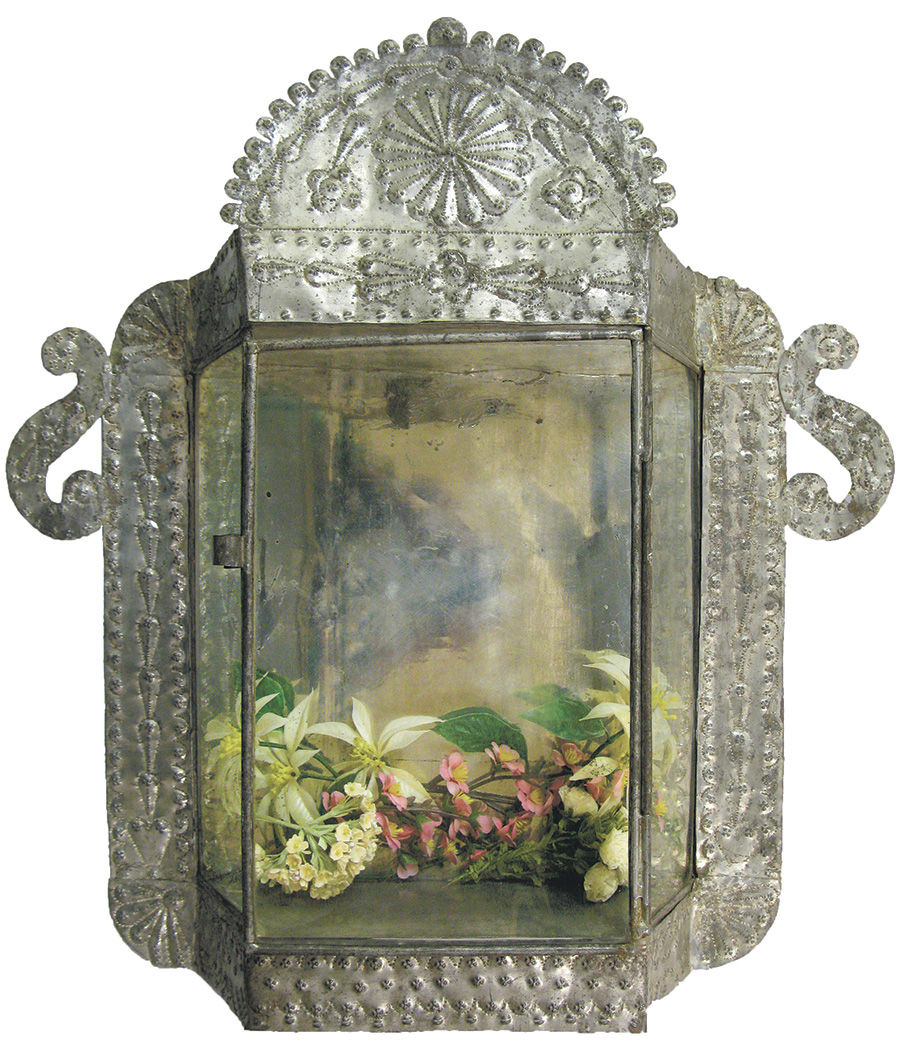 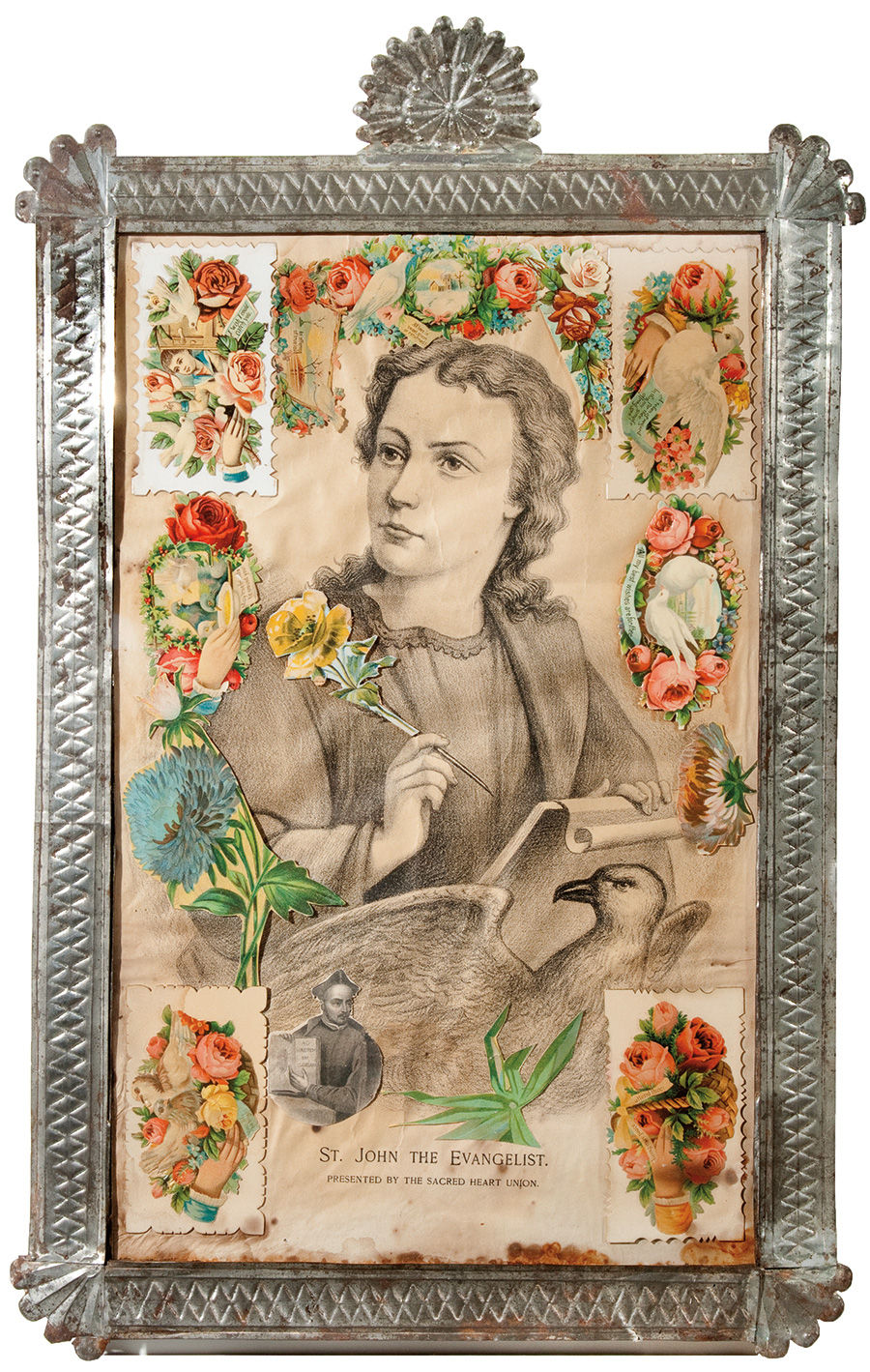 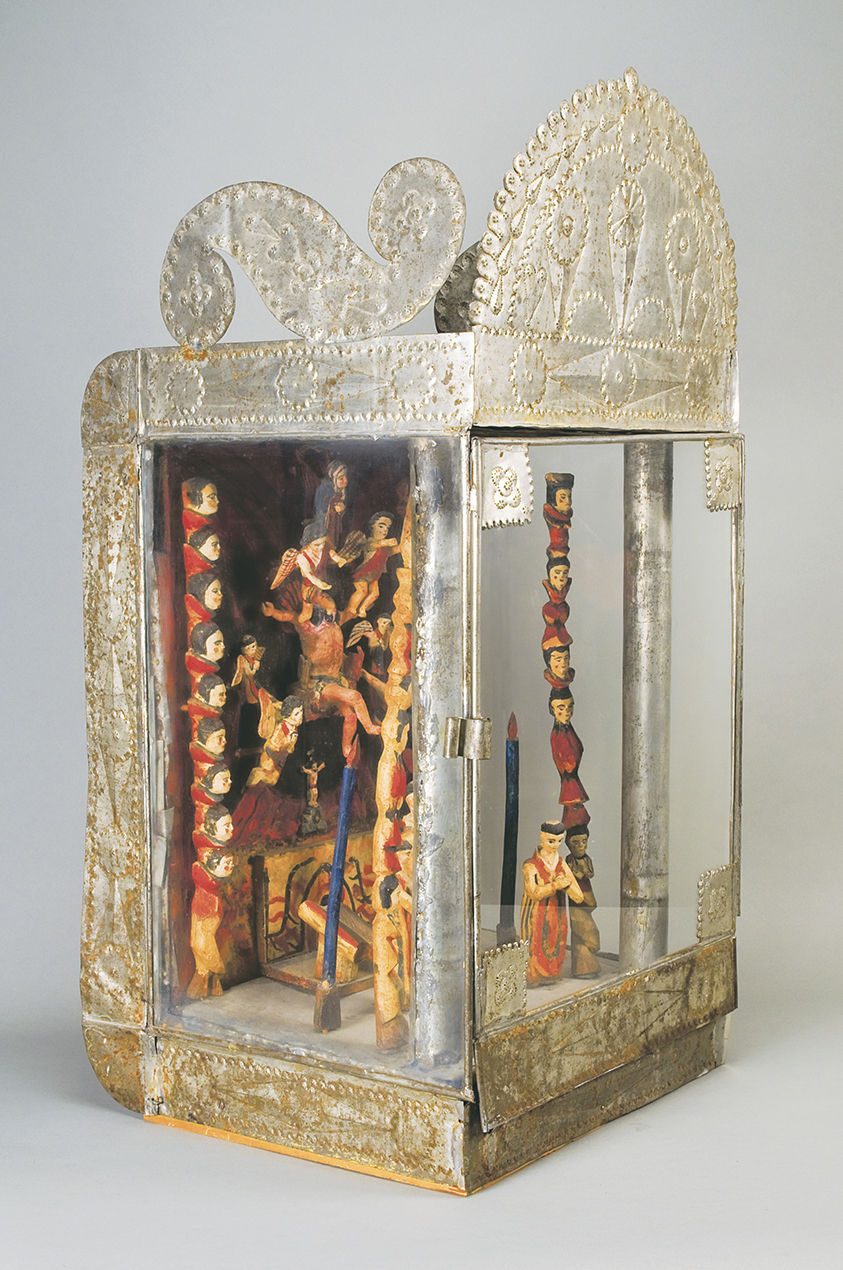 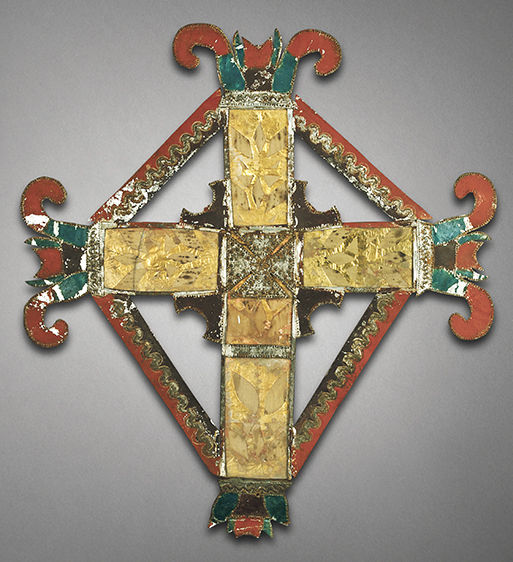 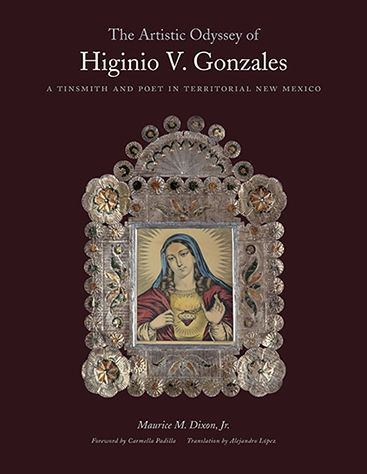 In the history of New Mexico metalwork, one man stands out for his prolific output and extravagant designs: Higinio V. Gonzales. However, until recently he was barely remembered. One of the unique aspects of Maurice Dixon’s new book, The Artistic Odyssey of Higinio V. Gonzales: A Tinsmith and Poet in Territorial New Mexico (University of Oklahoma Press), is that it upends some of the conclusions in what many consider to be the bible on the subject, which was published by Dixon and Lane Coulter in 1990. The majority of the ornate pieces in New Mexican Tinwork, 1840-1940 were assumed to have been produced by workshops whose craftsmen are not remembered. But even before that book hit the shelves, Dixon was digging up evidence that led to a dramatic conclusion: Many of the featured pieces in New Mexican Tinwork were in fact made by Gonzales.

Another revelation in the new volume, also the fruit of Dixon’s decades of meticulous research, is the work of Gonzales the poet and musician. “The beauty of his poetry is that it really reflected the intellectualism of the local population,” said Carmella Padilla, who wrote the book’s foreword. “He wasn’t formally educated, that we know of, but he was certainly educated. The breadth of his poetry really shows that.” The exhibition The Artistic Odyssey of Higinio V. Gonzales: A Tinsmith and Poet in Territorial New Mexico opens at the Albuquerque Museum on Saturday, Dec. 19.

Dixon’s project began in 1984, when he acquired the workshop of Santa Fe master tinsmith Robert Woodman and mounted an exhibition of New Mexican tinwork. He and metalsmith Coulter, distressed about the popular practice of removing devotional prints from their historic marcos (tin frames) and replacing them with mirrors, began work on their 1990 book that illuminates the artistry of the hojalatero (tinsmith). Not long afterwards, Dixon began running into mentions of one of these metalworkers, who was known to friends and family as “Ginio” Gonzales.

“When did he take over my life?” Dixon responded, when asked by Pasatiempo how long his interest in this man went back. “It was about 1989. We had finished the manuscript, and Marie Romero Cash and Jack Parsons were on contract with the Archdiocese of Santa Fe to document all the cultural properties within the diocese. Marie called us and said she had seen a large tin piece with a signature on it. It was signed and dated Jan. 28, 1872. It was a piece commissioned by a prominent individual, Faustus Vigil, and had a bulto of Our Lady of Guadalupe in it. Technically this piece is an hornacina because it’s primarily glass. It is tin and glass, backed with black, canvas-like cloth, probably oilcloth. It has a pitched roof and the dedication is painted there in reverse.” The hornacina is quite tall at 27 inches, and was designed to be carried on a palanquin in procession on the feast day of Our Lady of Guadalupe, which is Dec. 12.

“We went to see the piece and Lane and I said, ‘We have to include this in the book.’ The editor allowed me to write five paragraphs in that first book, and I did include a caveat that future research would probably show that many of the pieces in the book were in fact made by Higinio Gonzales.”

Gonzales was born in Santa Fe in 1842 and grew up in a house that stood where the La Fonda parking garage is now. He was baptized by Juan Felipe Ortiz, the vicar at La Parroquia, the imposing, adobe parish church that preceded the 1886 cathedral. A boys’ school established by Archbishop Jean Baptiste Lamy was a few steps away, and it is possible that he studied there. One of the earliest known, signed examples of Gonzales’ literary abilities is an 1889 birthday greeting on paper, a beautifully handwritten poem surmounted by an eye-in-diamond symbol and a colored drawing of a dove, and flanked by rose branches, with finely pin-pricked decorative designs around the border.

The next significant step in Dixon’s research led him to Robin Farwell Gavin, who at that time was senior curator of Spanish Colonial collections at the Museum of International Folk Art. In her catalog for the exhibition Familia y Fe, she referred to Gonzales and mentioned that he was a musician. Dixon talked to her about that reference, and then visited the Center for Southwest Research at the University of New Mexico’s Zimmerman Library. There he encountered the work of composer and musicologist John Donald Robb (1892-1989), who traveled throughout New Mexico recording the disappearing folk songs of the region’s músicos. The name Higinio Gonzales kept popping up. Robb articles such as “H.V. Gonzales: Folk Poet of New Mexico” in a 1974 issue of The New Mexico Folklore Record proved a boon to Dixon. “Some of Robb’s informants mentioned that Ginio wrote poetry, and it was published in some of the Spanish-language newspapers,” Dixon said.  “That’s when I started going through the microfilm of La Voz del Pueblo in Las Vegas, El Independiente in Las Vegas, El Estado Nueva in Tierra Amarilla, and El Nuevo Mexicano here in Santa Fe.”

The great majority of the poems are written in the décima form, which is 10 lines with a specific rhyming sequence. Dixon opens the first chapter of The Artistic Odyssey with an account of Gonzales’ poetry published in 1897 in La Voz del Pueblo, including odes to the beauty of women and pledges to overcome his passions, as demonstrated in the 164-line poem titled “Renunciation of Worldly Things.” Some 80 poems have been collected. Of those, 59 are unsigned, but all “are attributable by Gonzales’ intellectually diverse and singularly dramatic literary voice,” Padilla writes in the foreword.

“He wrote about everything, but in particular the ladies and his relationships with the ladies,” Dixon said. “As one of Gonzales’ former pupils told Robb, ‘He got around.’ He was also very devoted. He wrote many alabados, hymns of praise.” He also waxed eloquent about his beloved New Mexican landscape. One of the book’s appendices offers several poems, with English translations by Alejandro López. Among their titles are “The Beauty of Mexican Women,” “Adios: To the Most Holy Virgin of Guadalupe, At Her Shrine in Pojoaque, N.M.” and “The Drought of 1899.”

Robb met with a man who had known Gonzales and he had a cuaderno (notebook) that contained nearly two dozen alabados and a religious folk play titled El Niño Perdido. “This was written about by many scholars, but they never could attribute it to a Mexican source, because how can anyone from New Mexico be intelligent enough to have written this fabulous folk play?” Dixon said. “The source was never officially determined, but it was in Gonzales’ notebook, complete with songs and stage direction. That notebook is the most important source of Gonzales’ work.”

Dixon believes this man was not only a tinsmith and poet, but also a traveling musician and a schoolteacher working in various communities in Northern New Mexico. Later in his life, he lived in Canjilón. It was there, in 1909, that Gonzales’ students presented a special Christmas Eve program. “He documented it in his beautiful handwriting and he sent that document to the superintendent of schools for Río Arriba County and it is now in the State Archives. So that provides a comparison tool for his writing.”

The man’s tinwork, as wide ranging and flamboyant as his writings, was developed from an early age. The 1860 census lists his vocation at age eighteen as “tinner,” which in that time was a valued livelihood involving the manufacture and repair of buckets, pitchers, scoops, roofs, gutters, and other essential items. In 1861, he volunteered for service in the Civil War (Gonzales was a witness to, or participant in, the Battle of Valverde south of Socorro) and in the muster rolls he is listed as a tinsmith. Then in the 1870 census he is again simply “tinner.”

One example of his very elaborate tinwork in the new book is a nicho, dating to 1860-1875, made to house a Gonzales-drawn image of El Santo Niño de Atocha. Its glass-encased housing is flanked by Solomonic columns and has borders of rows of single-dot-dibbled punchmarks, reverse-scored parallel bands, and eyebrow arcs, along with large stars at the corners. On top is a medallion, stamped with a fan pattern and centered on the apex of a pediment.

Dixon’s conclusions about Gonzales’ authorship of so many works in tin are based on the results of years of scholarly research and also on his own skill as a master tinsmith and collector of historic tin. He confided that Gonzales had “a wide variety of design styles, and he had so many dies that it’s almost confounding.” But he was able to identify particular die-tool marks as undoubtedly made by this one hojalatero.

Another of the glorious pieces in The Artistic Odyssey was a surprising discovery. Now held by the Millicent Rogers Museum in Taos, the work is a color and ink-wash drawing of San Cayetano inside a marco. It exhibits punchmarks made by three dies — an irregular star, a notched “deer track,” and a tiny serrate arc — that Dixon realized characterize all of Gonzales’ artistic tinwork.

A glimpse at the back of the piece demonstrates the fact that these artworks relied on recycled tin cans, often large cans of oil or lard. On the rear of the San Cayetano work, the can brand and patent date of July 12, 1859, are embossed. The piece’s provenance is a story in itself. “It was once owned by the famous potter María Martínez. It was given to the Millicent Rogers Museum by Anita Da, María’s daughter-in-law. It was given to María by Don Elfego Gonzales, whose father, Higinio, painted the piece and made the tin frame. So that became the eureka moment,” Dixon said. “From there, I was able to start connecting dots.”

The new book is full of wonderful stories and details of this life, woven into the history of Northern New Mexico in the second half of the 19th century and into the 20th. Ginio was four years old when the Army of the West’s Gen. Stephen Watts Kearny marched into the Plaza and replaced the Mexican flag on the Palace of the Governors with the U.S. flag. And in 1912, the last year in which a poem known to have been penned by Gonzales was published in El Nuevo Mexicano, he was just shy of his seventieth birthday when New Mexico finally won statehood.

▼ The Artistic Odyssey of Higinio V. Gonzales: A Tinsmith and Poet in Territorial New Mexico, exhibition