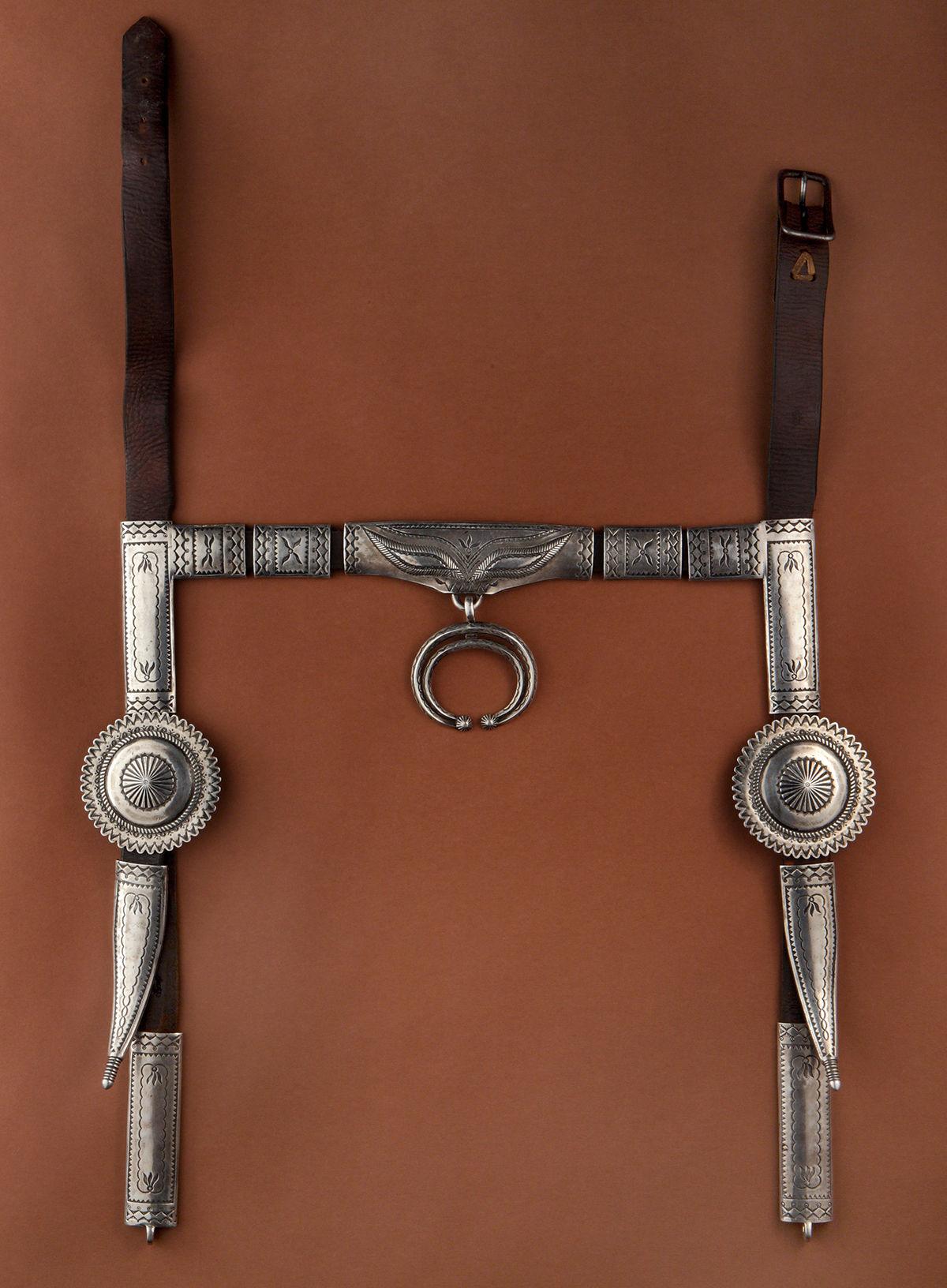 Navajo bridle, circa 1900; courtesy the Wheelwright Museum of the American Indian 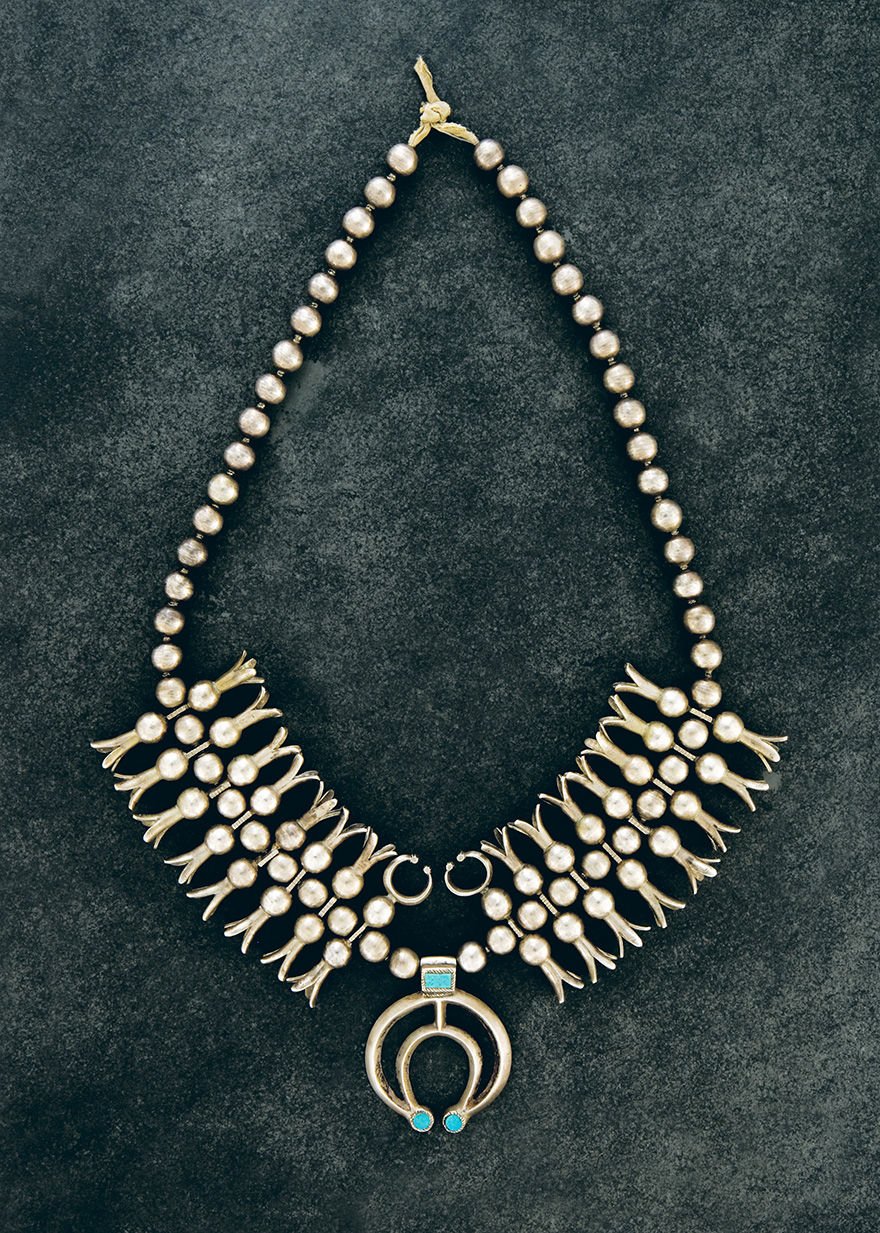 Squash-blossom necklace by Slender Maker of Silver, circa 1885-1890, hand-wrought and tufa-cast silver and turquoise; courtesy the Wheelwright Museum of the American Indian 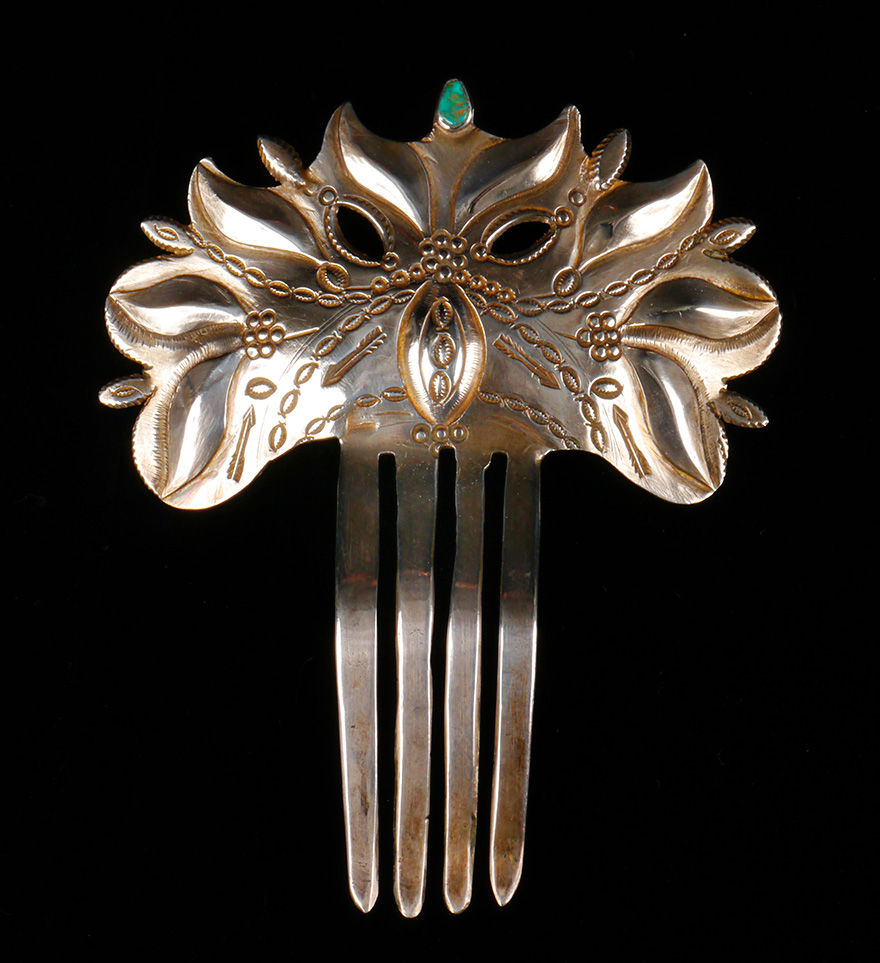 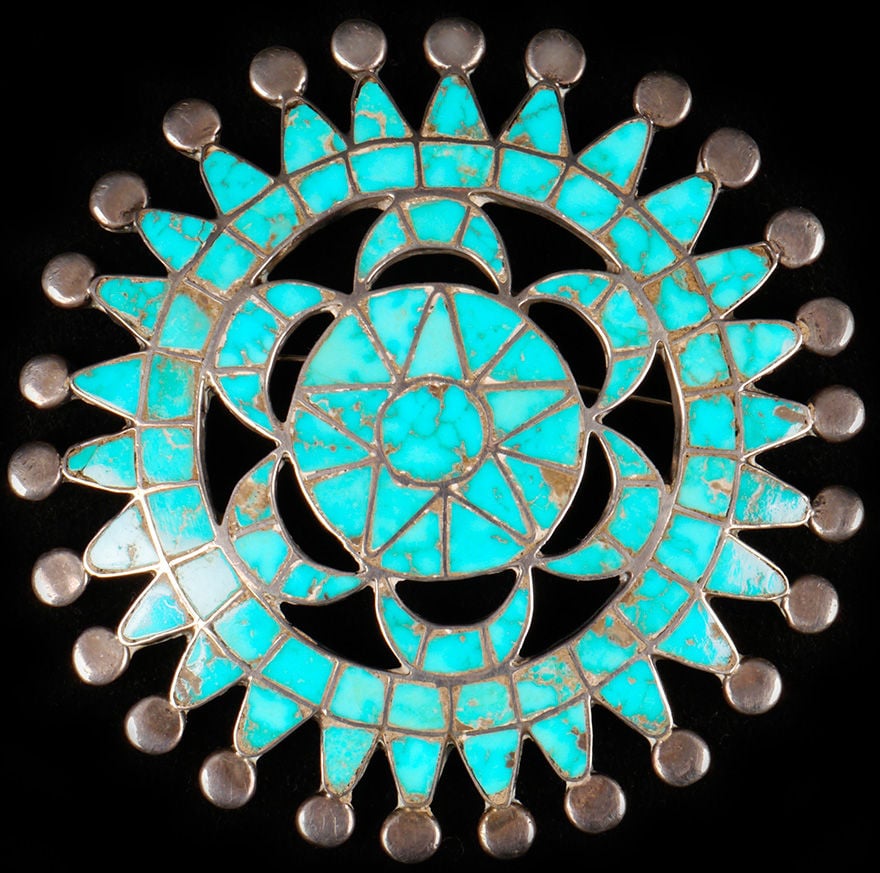 Pin by Lambert Homer (Zuni Pueblo) and Roger Skeet (Navajo), circa 1935, hand-wrought silver and turquoise; courtesy the Wheelwright Museum of the American Indian 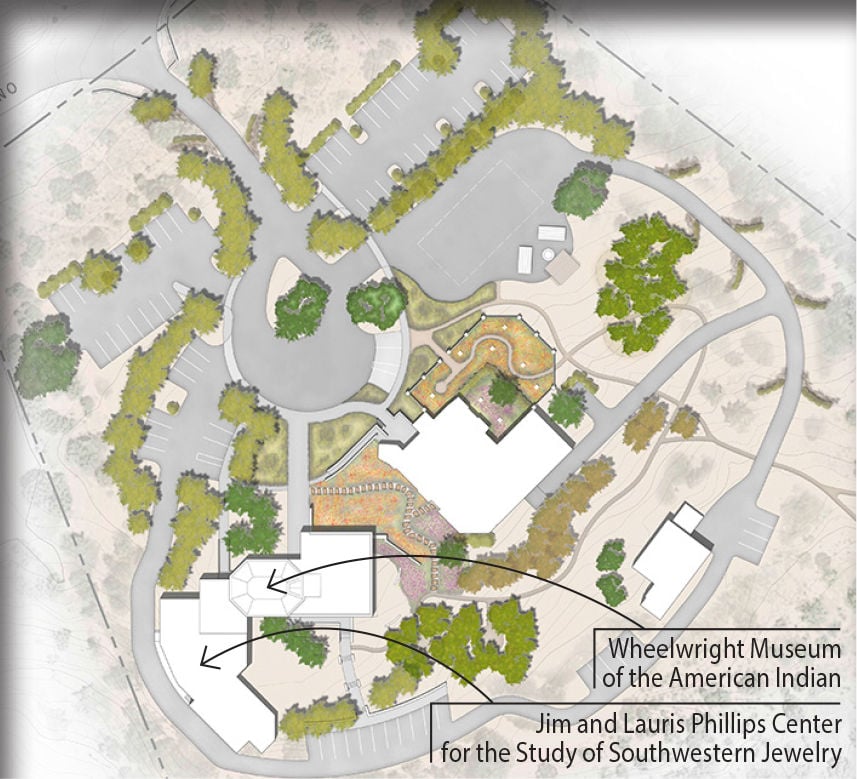 Navajo bridle, circa 1900; courtesy the Wheelwright Museum of the American Indian

Squash-blossom necklace by Slender Maker of Silver, circa 1885-1890, hand-wrought and tufa-cast silver and turquoise; courtesy the Wheelwright Museum of the American Indian

Pin by Lambert Homer (Zuni Pueblo) and Roger Skeet (Navajo), circa 1935, hand-wrought silver and turquoise; courtesy the Wheelwright Museum of the American Indian

Like many young Natives from New Mexico, Manuel Naranjo learned the silversmithing trade through employment at curio shops in the 1920s and ’30s. After World War II, some Natives found prominent careers as jewelers, and Naranjo was among them. When the Denver shop where the Santa Clara-born silversmith worked closed in the mid-1990s, his jeweler’s workbench was sold at auction. By fortuitous circumstance, it ended up in the collection of the Wheelwright Museum of the American Indian — the bench was purchased as a prop for the gift shop. “We didn’t know whose workbench it was,” Wheelwright director Jonathan Batkin told Pasatiempo. “We had a visitor come in at one point and say ‘I know this workbench, and I know the guy who used to work at this bench.’ ” The bench is included in a display case commemorating Naranjo in the Wheelwright’s Center for the Study of Southwestern Jewelry, a new wing dedicated exclusively to the history of jewelry and related arts and their continuing influence on contemporary jewelers. “Naranjo was born at Santa Clara Pueblo in 1909,” Batkin said. “He learned silversmithing at Maisel’s Indian Trading Post in Albuquerque in 1929, and then moved to Denver and went on to be a silver-smith in a shop where he was kind of on display to the public until 1993, except for during wartime activity. The purpose was that Native people in the shops would lend authenticity to the jewelry. They were taken advantage of by the shops, to a degree. So this case is a little tribute to Manuel and that whole idea that there were all these guys who were sort of held in captivity, in a way, and put on display.”

The full name of the new wing, a two-story building comprising nearly 7,000 square feet, is the Jim and Lauris Phillips Center for the Study of Southwestern Jewelry, named for collectors of Native American art. The gallery that houses the permanent exhibit of Southwestern jewelry is named for art dealer and collector Martha Hopkins Struever. The exhibit is an encyclopedic overview that begins with a consideration of stone and shell, two materials in use in Native jewelry for more than a thousand years. “Santo Domingo Pueblo has made and supplied beads, and also turquoise, jet, and other materials for centuries throughout the Southwest,” Batkin said. “The tradition continues to this day. The Navajos wear stone and shell necklaces, but the material was processed at Santo Domingo.”

The new center opens with a series of family-friendly events on Sunday, June 7. Jewelry-making demonstrations by Charlene Reano, Isaiah Ortiz, and other artists take place throughout the day. There are also children’s activities, a performance by Pojoaque Pueblo’s Youth Hoop Dancers, a sand-painting demonstration by artist Zachariah Ben, and storytelling and music with author Robin Easton and educator Stephen Fadden (a complete schedule of events is available at www.wheelwright.org).

Early blacksmithing, which influenced later work with other metals, is explored in one case. The blacksmithing trade took off among Navajo and Pueblo peoples in the 19th century. By 1850, Navajos and some Pueblo peoples were engaged in blacksmithing for commercial purposes. “We touch on how silversmithing is introduced from the Navajos to the Pueblos and then to Hopi. The first great master among Navajo silversmiths is known as Slender Maker of Silver. To his descendants today he’s simply known as Slim,” Batkin said. Several display units are given prominent placement in the new building, and each honors some of the more influential regional silversmiths and jewelers including Slender Maker, who died in 1916. “He was active by, we imagine, the late 1870s, early 1880s. By 1885 he’s already accomplished enough that people know who he is. There’s very few pieces in this case, about a half-dozen pieces, but it’s probably the best gathering of his work in any institution.” Directly opposite Slender Maker’s case is the work of his son, Fred Peshlakai, who learned the art from his father. “Fred had a career of his own in a shop on Olvera Street in Los Angeles.”

Artist Charles Loloma (1921-1991), a Hopi who was known as a painter, muralist, and potter as well as a jeweler, is among the celebrated names in the exhibit. Loloma eschewed traditional materials and designs that typified much of Southwestern jewelry in favor of more contemporary styles. “Charles Loloma was a great innovator,” Batkin said. “There are separate cases devoted to a number of other jewelers: Preston Monongye, a Mexican and Mission Indian from Southern California by birth who was adopted into Hopi; Kenneth Begay, a Navajo smith, has a case. There’s a case that’s equally divided between Morris Robinson and Louis Lomay, Hopi silversmiths. It’s mostly chronological. We touch on traditional women’s wear, ornamentation, adornment, traditional men’s adornment, and occasionally we’ll have a case that will be nothing but eye candy: great early bracelets, great early belts, great contemporary belts, great early earrings.”

In all, there are 32 self-contained units, each dealing with a different subject. The project began more than 20 years ago in recognition of the museum’s world-class collection of Native jewelry and related materials. The Wheelwright acquired the papers of former Army surgeon Washington Matthews, an ethnologist who worked among the Navajos in the late 19th century. “He became one of the first ethnologists to work in the Southwest,” according to Batkin. “At Fort Wingate, he met a guy who delivered the mail who was just known as Jake. Matthews was interested in Jake because Jake was a ritual practitioner with a fair amount of ceremonial knowledge.” Matthews was also interested in Navajo silversmithing and weaving, but little scholarly material existed on the topics at the time. Matthews wrote some of the first articles on those subjects, and they were published by the Smithsonian. “There’s an article in an annual report of the Bureau of Ethnology, which later became the Bureau of American Ethnology. It was a description of how Navajos were working silver as of 1880. It was probably around 1879-1880 that he did his fieldwork. Jake was his informant.”

Another influential source for the new research center is the fieldwork of anthropologist John Adair, who began working at Zuni Pueblo in the late 1930s. “What he wanted to find out was, who were the first silversmiths? Where did the knowledge come from? How did it get transmitted from community to community?” It is due to Adair’s research that the museum could begin making the necessary connections to construct a narrative around the history of Southwestern jewelry. “Because of him, we know who some of the first smiths were, which one taught whom at Zuni, and which Zuni silversmiths taught the first Hopi silversmiths.” The museum acquired his papers in 1995. The archival materials from Adair, Matthews, and others were used in creating the interpretive text for the cases dealing with historic content. “The archives are really deep. Navajo ceremonialism is another subject on which we have some incredible archival material, but it’s restricted. If people want to use that material, they have to get the permission of the Navajo Nation. We make those connections for them.” Use of Native ceremonial objects in museums is often restricted because of the sensitive nature of the materials. Sometimes, a slightly altered version of a ceremonial object gets sold to a collector or contemporary pieces can be misrepresented as historic objects. Such was the case with author and naturalist Leonora Curtin’s collection of Zuni fetishes. “She was one of the first active collectors of Zuni fetishes. She started collecting in the late ’20s. Traders were telling her ‘This is an ancient ritual fetish.’ Actually, she was collecting contemporary stuff and didn’t know it. But the good thing is, she built the best collection anywhere of the work of the first generation of carvers at Zuni to carve for a commercial market.”

Another small collection of jewelry came from Byron Harvey III, the great-grandson of entrepreneur Fred Harvey, founder of the Harvey House chain of hotels and shops. Visitors to the exhibit are also introduced to subjects such as the mechanization of silversmithing in the 20th century, Hopi jewelry practices, modern and contemporary practices at Zuni, and a survey of living artists still actively producing jewelry. “We cultivated from people all over the country who gave collections, and it’s everything: it’s silver, it’s plastics and rubber, it’s repurposed materials, it’s contemporary stainless steel and carbon fiber; it’s the entire spectrum. No other institution has built a collection like this, but we did it very deliberately. I think we’re able to present a fuller group of material, but we also have the ability to interpret it with much greater depth than any other institution. We’ve worked hard to present a fresh perspective.” ◀

Opening of the Jim and Lauris Phillips

Center for the Study of Southwestern Jewelry

1:30 p.m. • Storytelling and music with Robin Easton and Stephen Fadden

Center specs: The Wheelwright Museum of the American Indian

The Wheelwright Museum of the American Indian is nearly 80 years old and never had space for a permanent exhibit, according to director Jonathan Batkin. He broke ground in the autumn of 2013 for the Jim and Lauris Phillips Center for the Study of Southwestern Jewelry, a two-floor gallery wing now complete off the southwest (rear) corner of the historic museum.

Besides a permanent jewelry exhibition space, there is a classroom, break room, a pair of small galleries for rotating exhibitions, and a curatorial workroom. During the same construction period, the main building was renovated — including new stucco, new roof, increased insulation, and upgrades to heating, ventilation, air conditioning, wiring, and telephone systems — and the Case Trading Post was expanded by 700 square feet. Outside, the design studio Surroundings led a remodel of the museum entry and the construction of improved parking areas.

First called the Museum of Navajo Ceremonial Art, the Wheelwright evolved out of a 15-year collaboration in preserving traditional Navajo ritual between wealthy Bostonian Mary Cabot Wheelwright and Navajo medicine man Hosteen Klah. The museum, which is a slightly stretched octagon, was designed by William Penhallow Henderson.

Jeff Seres of Studio Southwest Architects — who did the new addition as well as a new library and curatorial center 15 years ago — said the museum “is stylistically abstracted Pueblo Revival from a Navajo hogan, but in my opinion it’s an incredibly modern, International Style building for 1937.”

Rugged penitentiary block was used to construct the original museum. The new addition is concrete block and steel; the use of double-T concrete joists in the second-floor roof resulted in a column-less main exhibition space.

On May 15, the project was honored with the Santa Fe Historic Preservation Division’s 2015 Cultural Preservation Award. — Paul Weideman