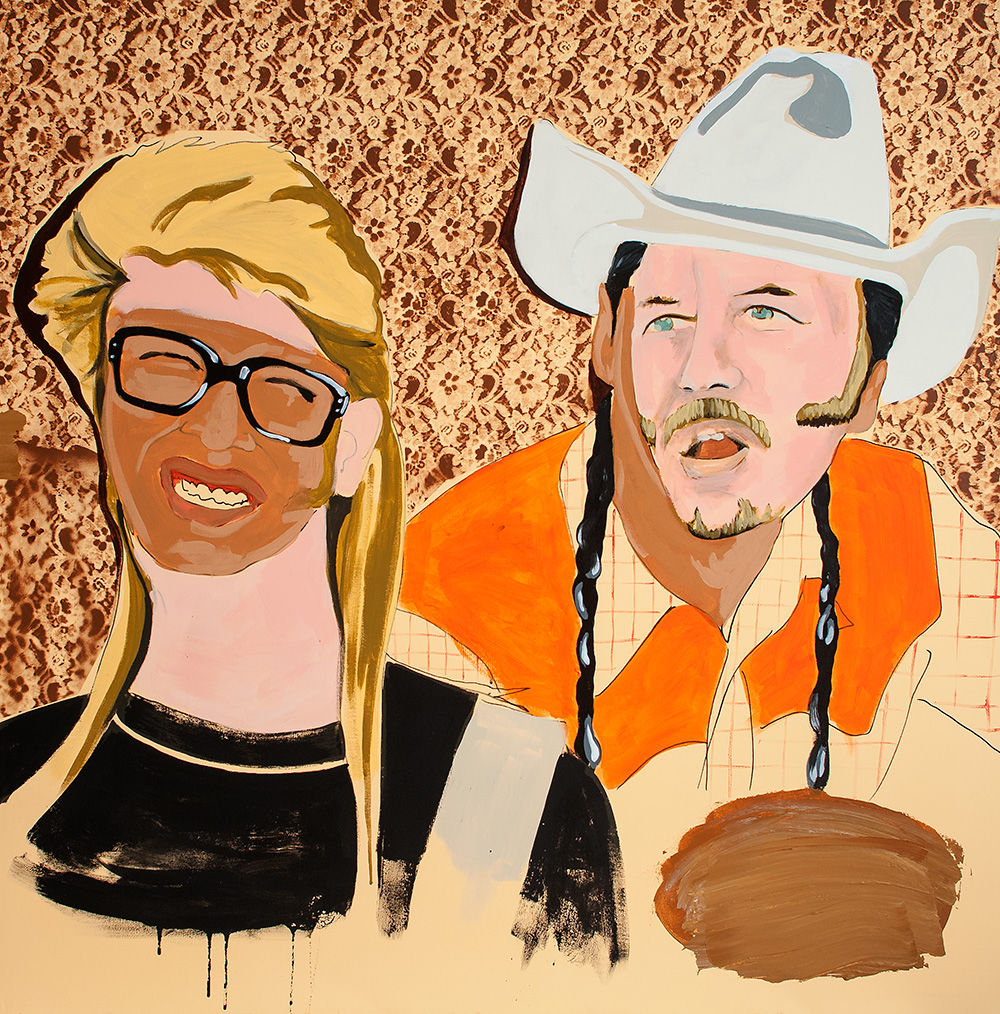 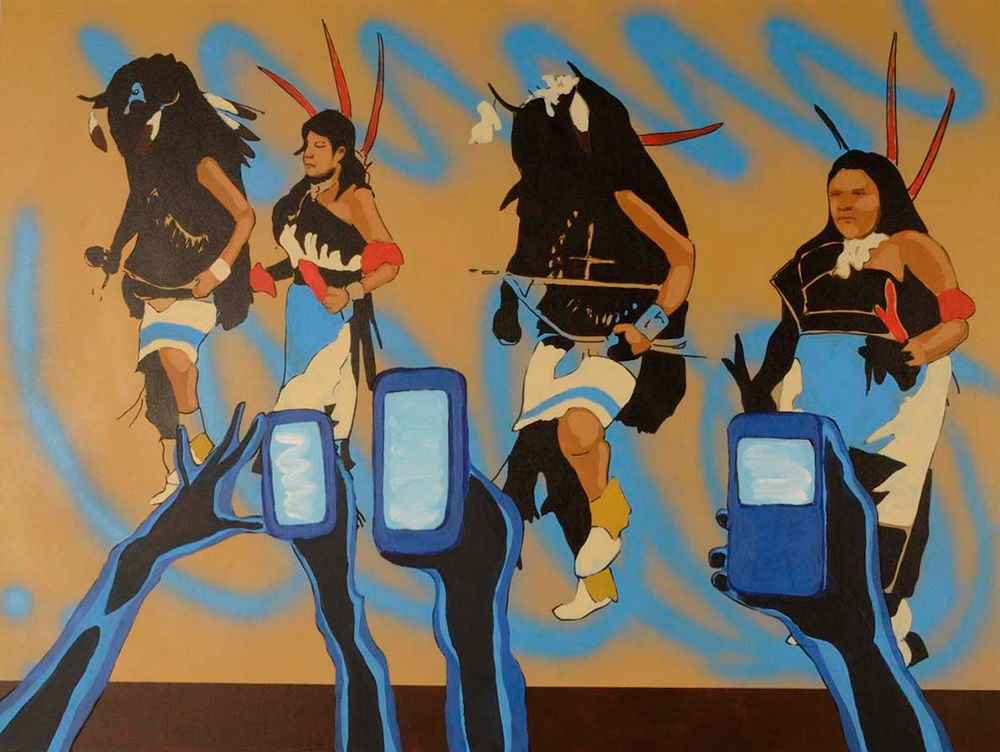 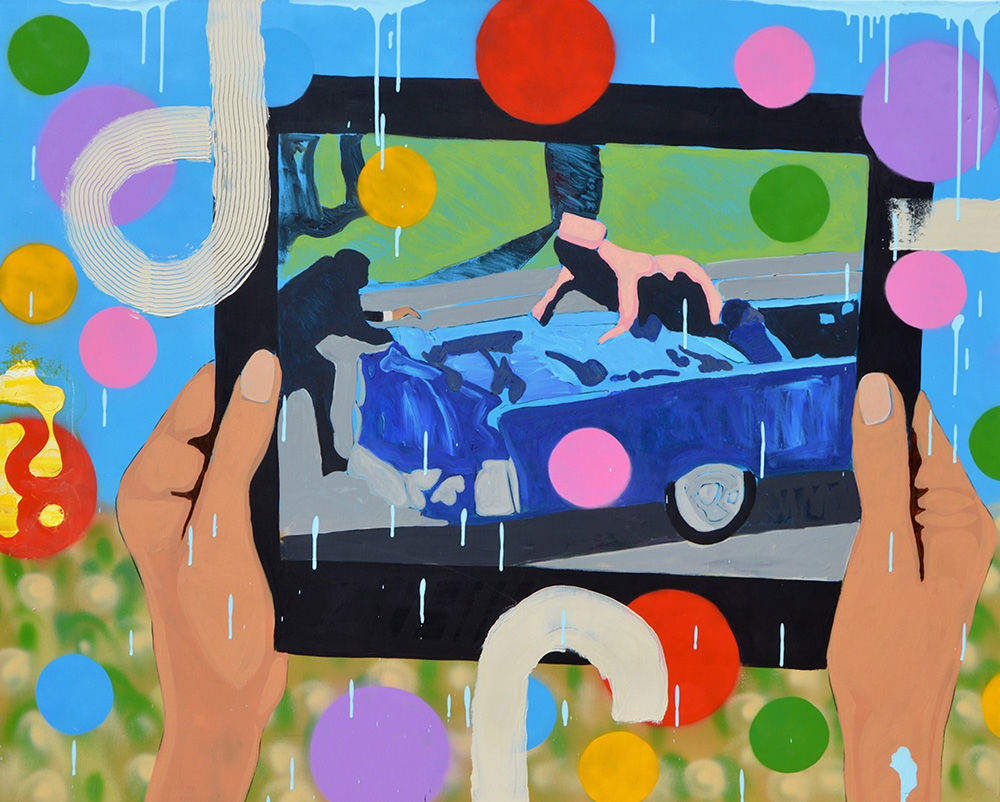 Visit a Native dance ceremony, and once the cameras come out, we are no longer engaged in the moment. In Frank Buffalo Hyde’s painting Four Dancers, a traditional buffalo dance is seen from the point of view of the spectator. Multiple hands holding cellphones obscure the view. The tech-driven world, the world of the small screen, plays a part in I-Witness Culture, a solo exhibition of Buffalo Hyde’s recent work on exhibit at the Museum of Indian Arts & Culture. “A lot of the paintings in the show are about how we experience our reality through a digital filter now,” the artist told Pasatiempo. “It’s almost desensitizing us in the sense that something’s not real unless we’ve posted it on social media.”

Drawing on images from advertising, movies, television, popular music, and politics, Buffalo Hyde’s compositions are a commentary on contemporary society, consumerism, and the contradictory aspects of images, which can be used as a means to deceive or as a means of documenting. “When I speak at different events I tell people that social media is a very useful tool but you have to be cautious, because it’s also a way of controlling people and getting out disinformation,” he said. “As with any sort of advancement in technology, it’s a double-edged sword. It’s all about how you use it and disseminate the information you get from it.”

I-Witness Culture features 14 of Buffalo Hyde’s paintings and three of his sculptures. All were made specifically for the exhibition, which is divided into three sections: Paranormal: The Truth Is Out There; Selfie SKNDNS; and In-Appropriate. Paranormal concerns myths of the American Indian, challenging the notion of indigenous peoples as remnants of the past. “At one of my first museum shows here in Santa Fe, I equated Native Americans with Bigfoot, because we had obtained that mythological status,” he said. “When we were growing up and people found out you were Native American, they would be surprised because they thought all Native Americans were gone. They absolutely didn’t think there were any east of the Mississippi. They wanted to take a picture of you. They wanted to touch your hair, asked if you lived in teepees, and all that stuff. So it’s an examination of the ridiculousness of that.”

Selfie SKNDNS reclaims the word “Indian” and the derogatory term “skins.” The paintings developed from a previous exhibition called SKNDNS: Native Americans on Film, in which Buffalo Hyde examined the role of the Native in cinema as depicted by Native and non-Native actors. Selfie SKNDNS uses the terminology of social media to explore civil-rights violations and discrimination in the age of technology. “In my mind the cellphone technology is a way for people to document protest,” Buffalo Hyde said. “If you look at Standing Rock, if they hadn’t been broadcasting their own news, nobody would have known about it.” The Standing Rock Sioux Reservation in the Dakotas has been the site of ongoing clashes between police and activists who oppose the construction of the Dakota Access Pipeline because of the risk of water contamination from the project. “It’s a good thing people were there documenting the police actions, the violence, and the violation of civil rights,” the artist said. “It goes back to the way you use a tool. It’s a way to keep people honest, but nowadays so many people are doing it that we’ve become desensitized.” His painting They Shoot Chiefs Don’t They underscores this point. It features a handheld tablet whose screen depicts the moment of John F. Kennedy’s assassination. The image of a political icon’s demise is at odds with the festive colored dots and strips that adorn the painting: pink, blue, purple, green, yellow, and red. A contemporary equivalent might include a video of a black man killed during a routine traffic stop, perhaps, or a video of a hate crime in progress viewed from the safety of home, with all the comforts a home affords. “It takes more and more to shock people into action beyond just clicking ‘Like,’ ” Buffalo Hyde said.

In-Appropriate delves into the appropriation of Native themes in popular culture and tackles the antiquated, romanticized view of the noble, magical Indian, a persistent stereotype. The notion of the Native as a footnote to history, a people whose time has come and gone, is a theme that ties all aspects of the show together, and this image remains a viable commodity in art. “It’s very commercial and very salable as long as it’s the noble, romantic image of the Indian who’s one with the earth,” Buffalo Hyde said. “That’s one of the reasons I started making art. The art that I saw being reproduced was not showing true contemporary Native existence. We’re involved in all areas of society, at all levels. We’re thriving, and at no point in history have we had more educated Native Americans in each field. There’s a level of awareness and organization that’s going on that hasn’t existed before. It’s an interesting time, because we still have all of this oppression coexisting with the intelligent and informed Native American of the 21st century.”   ◀