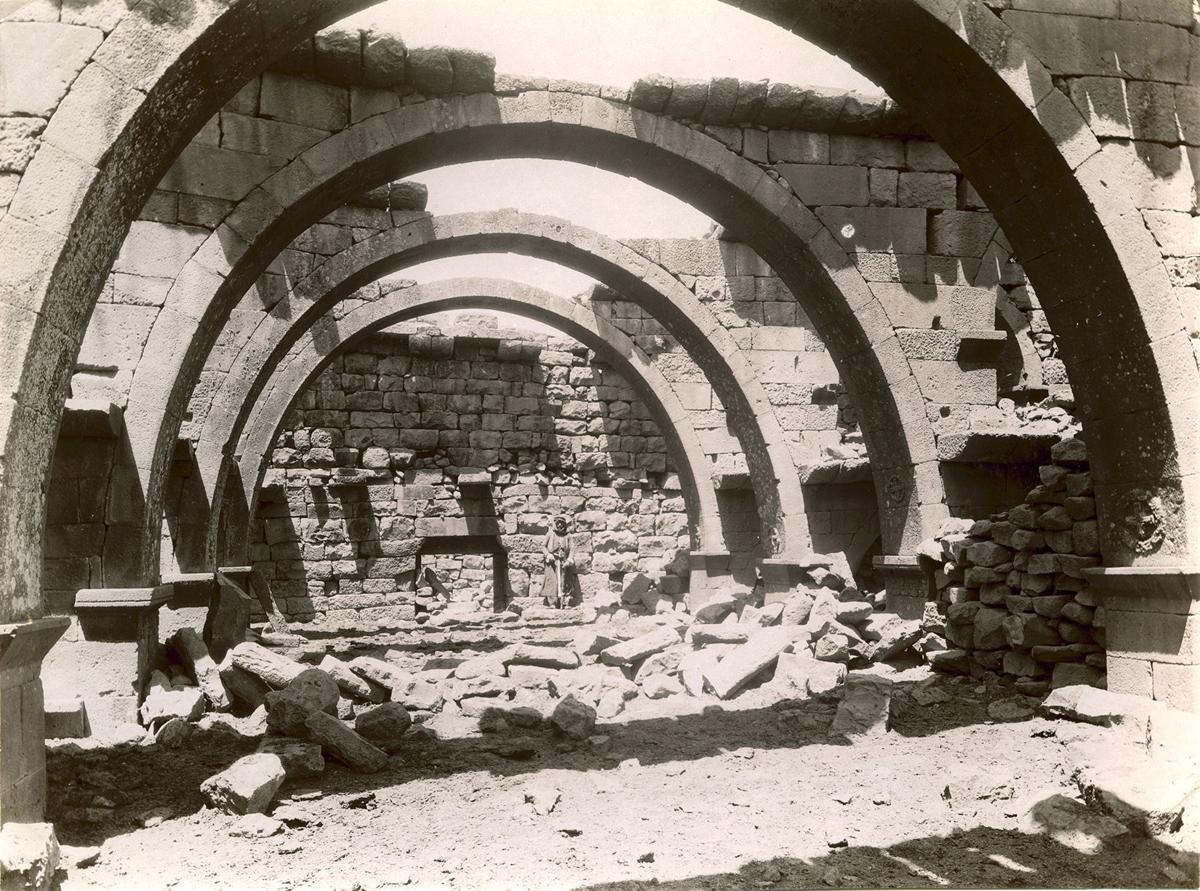 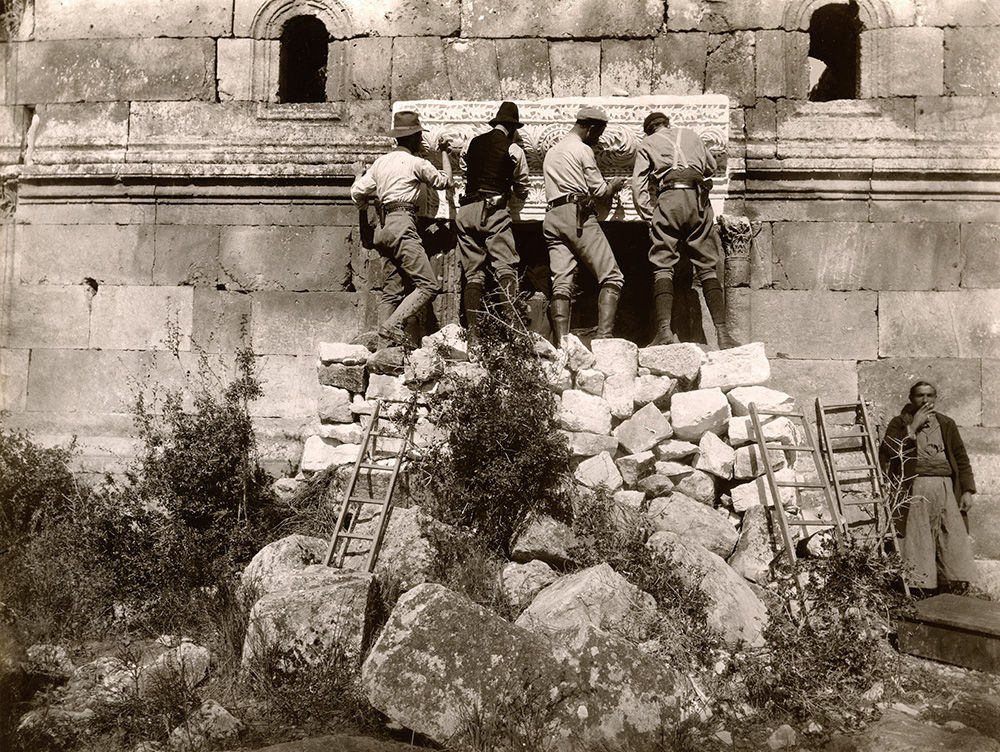 Archaeologists working on the lintel of the Great Tomb, Bâra (il-Bârah), Syria, photographed by Princeton University team, circa 1899-1910, courtesy Palace of the Governors (NMHM/DCA), Negative No. 95722 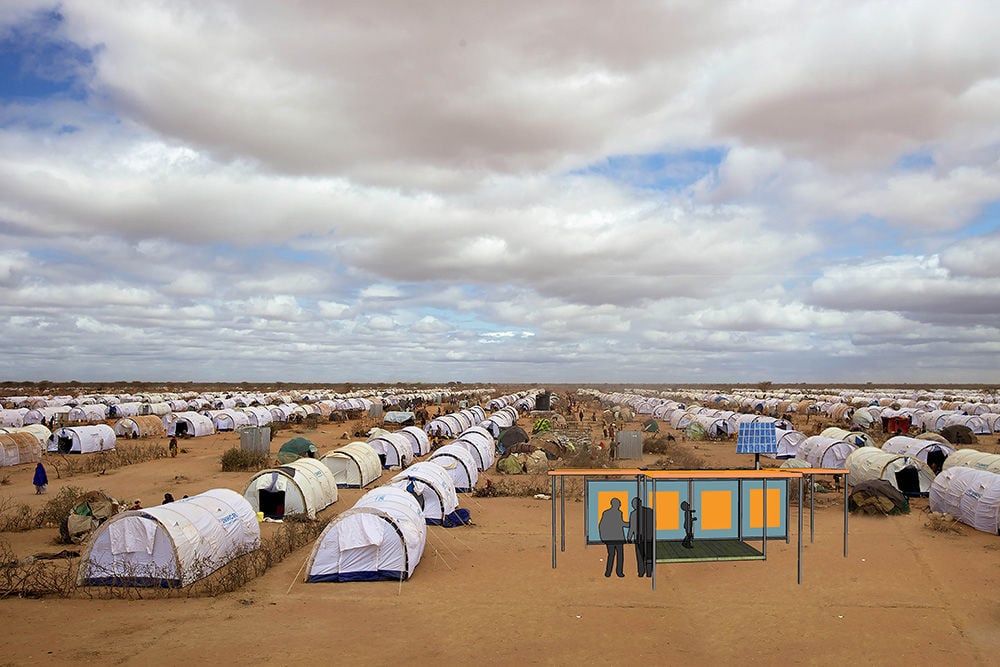 Kiosk rendering superimposed on photograph of a refugee camp in Dadaab, Kenya, courtesy Curators Without Borders 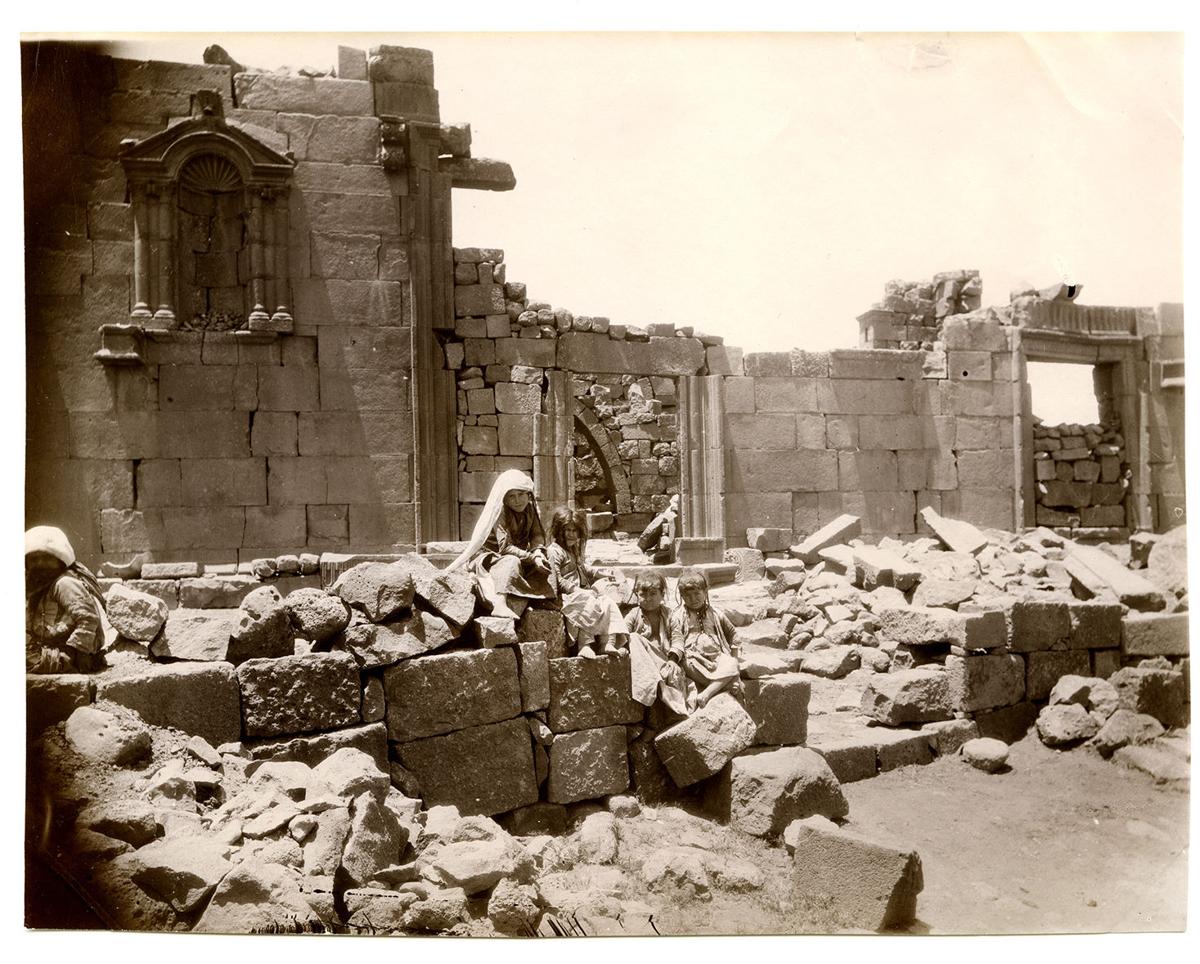 Children among the ruins of Shakka, Syria, photographed by Princeton University team, circa 1899-1910, courtesy Palace of the Governors (NMHM/DCA), Negative No. 95882 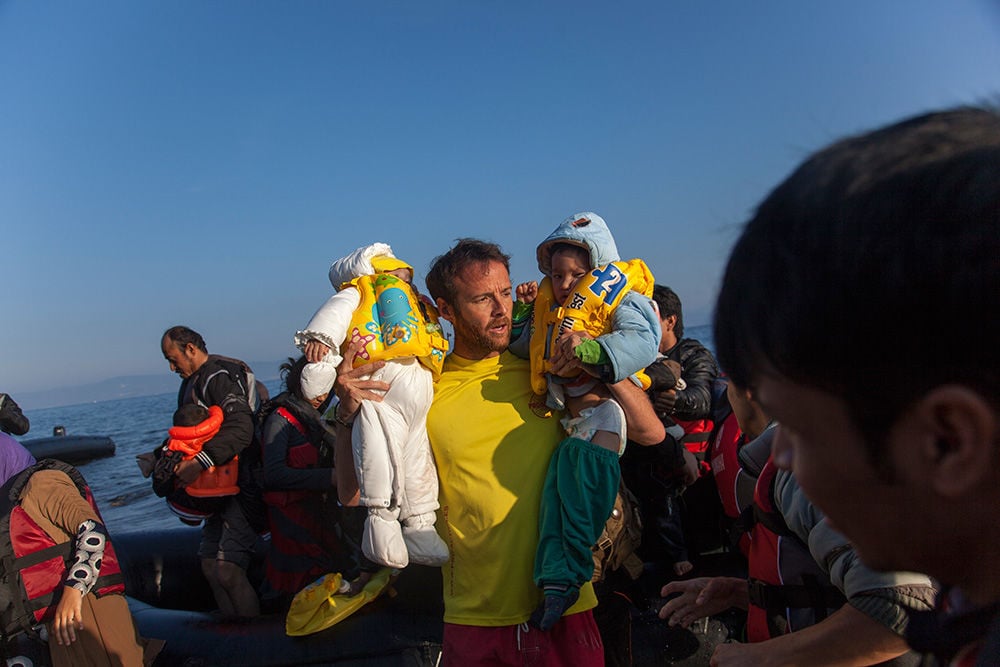 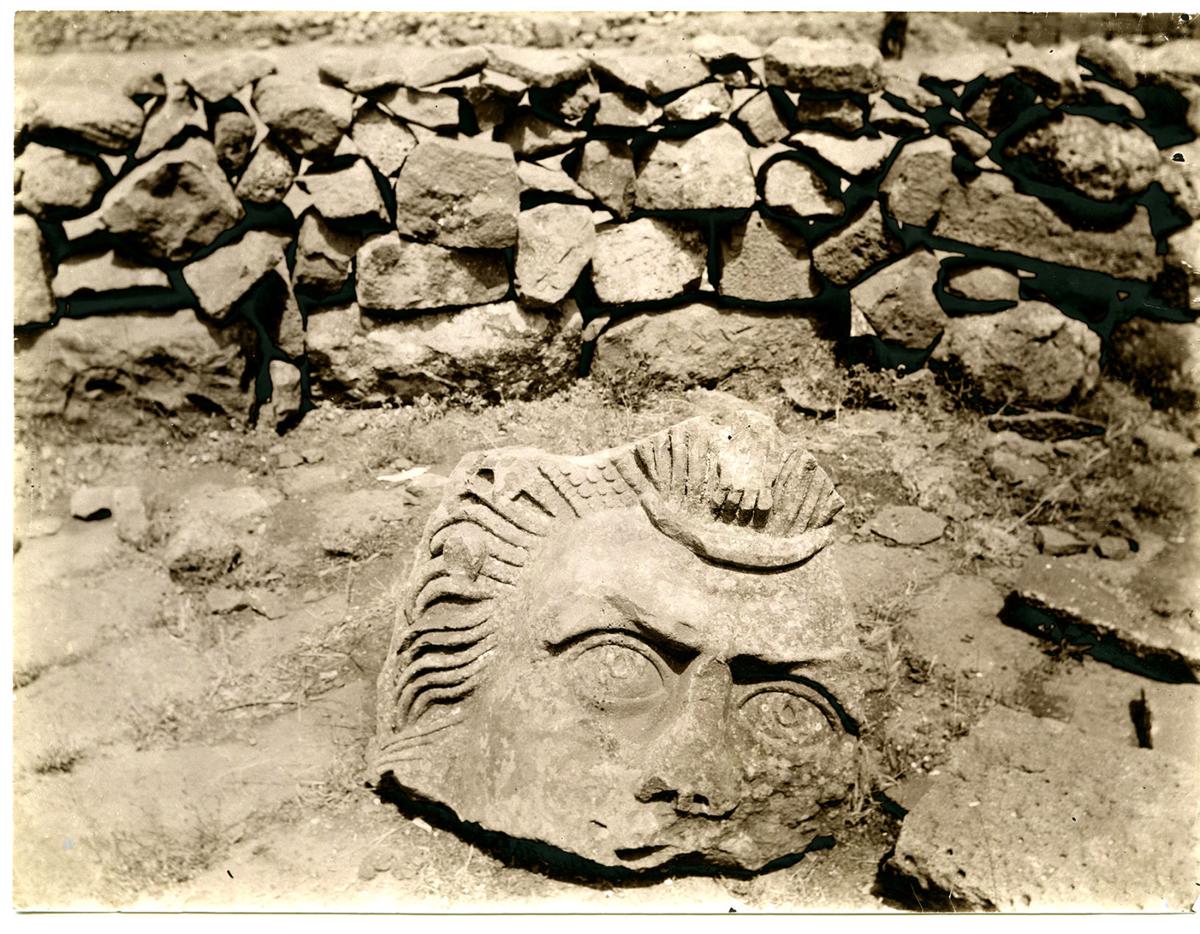 Archaeologists working on the lintel of the Great Tomb, Bâra (il-Bârah), Syria, photographed by Princeton University team, circa 1899-1910, courtesy Palace of the Governors (NMHM/DCA), Negative No. 95722

Kiosk rendering superimposed on photograph of a refugee camp in Dadaab, Kenya, courtesy Curators Without Borders

Children among the ruins of Shakka, Syria, photographed by Princeton University team, circa 1899-1910, courtesy Palace of the Governors (NMHM/DCA), Negative No. 95882

The New Mexico History Museum exhibit Syria: Cultural Patrimony Under Threat features amazing photographs of ancient buildings, many of which have been destroyed by ISIS in the past few years. The show, which opens on Friday, June 23, draws from the collections of the Palace of the Governors Photo Archives, highlighting images of Syrian people and grand historic buildings with carved stonework that were photographed more than a century ago. “This collection is seven albums containing 642 photographs from three surveys of archaeological sites in the Middle East that were carried out by Princeton University between 1899 and 1909,” said curator Daniel Kosharek. “They were part of the Edgar Lee Hewett Collection at the Museum of New Mexico, and they were transferred here from the Laboratory of Anthropology in 1976.”

Kosharek said part of the impetus for the exhibit was a November 2015 Pasatiempo story by Khristaan D. Villela (“Viajes pintorescos y arqueológicos: Requiem for Palmyra”). “The way that came about is that I knew we had these seven albums, including images of Palmyra. Khristaan was down here doing research, and I said it would be interesting to do a story about these photos, many showing buildings that have been destroyed by ISIS.” Just since 2015, many of Syria’s most important archaeological sites — among them the temples of Bel and Baalshamin and the Roman ruins of Palmyra — have been dynamited by members of the radical ISIS faction. “When they started blowing those places up and taking stonecutters to the statues, it was heartbreaking, and I thought we could do a small exhibit.

“We will have a big wall case that will have six of the seven albums opened, and every two or three weeks we will open them to new pages to avoid too much exposure of light on individual photos. Then we’re taking three photos and blowing them up 33 by 34 inches. One will be Temple of Bel, another of archaeologists working on a site, and the third a portrait of a Syrian woman.” Kosharek said the photographs are all original albumen prints — made on glass-plate negatives in large-format cameras — that date to expeditions led by Princeton professor Howard Crosby Butler.

The exhibit includes an educational kiosk targeted at children. The kiosk’s panoply of information and activities even includes Wonder Woman. “Queen Zenobia of Palmyra was the original Wonder Woman, bracelets and all,” said Elana Haviv, founder and director of the Generation Human Rights organization. “She wanted to have her own empire, which was a tolerant and diverse community, actually.” Haviv is working with Heidi McKinnon, founder and director of Curators Without Borders, on the kiosk. “My job, my challenge,” Haviv told Pasatiempo, “was how to make black-and-white photos of ancient sites that were taken over a hundred years ago be exciting and tangible for American kids. What I did was create a lesson plan for youth to go through the kiosk with a partner, and they will be stepping into the footsteps of a child or youth from ancient medieval Syrian times. They can see how they dressed, and they get to choose how they want to dress and what they want to eat. They learn about the temples, and they can choose what they want to bring as an offering to the Zeus temple.

“The kids learn about Queen Zenobia, and they can discuss with their partner what happened to her. Did she marry a Roman senator? Did she kill herself? Was she executed? And another part of the exhibit is the photographs of the Assassins’ castle [Masyaf Castle]. In pop culture, there are video games and a Netflix series about them today. Kids can reflect on the fact that this was two thousand years ago, and look how we use it today, and what are we doing now that in two thousand years might be part of some game?”

The inside of the room-like kiosk is designed to offer an in-depth look at ancient Syria, while the outside surfaces contain information about the destruction of ancient sites by ISIS and about the current refugee crisis. The Syrian civil war, now in its seventh year, has created more than five million Syrian refugees. “What Heidi and Elana are doing is humanizing all of this and making it accessible,” Kosharek said. “They’re also using some of Tony O’Brien’s photographs of a street in a refugee camp and a group of schoolchildren in a classroom in a camp on the kiosk. At the time he was in Jordan in 2013, the refugee camp he photographed was the largest in the world.”

McKinnon said the kiosk — “a history lesson and an architecture lesson, with a little art history, too” — is actually a prototype. She hopes to see similar stations put up in refugee settlements and other emergency zones in the future. “This is just one lesson plan that we’ve done, but the concept is basically that we’re taking the idea of an itinerant exhibition space where children who have no access to brick-and-mortar schools can do some kind of self-guided learning experience. The one in the museum isn’t exactly what you’d see on the ground, because we will use local materials and durable materials to withstand sandstorms and rainstorms, and they will be closable at night.

“The original concept was to get museums involved in humanitarian and development projects, because museum collections are a perfect means of developing culturally sensitive learning materials. The first prototype was going to be with Somali refugees in Ethiopia, but the famine has become acute, and it just wasn’t feasible. We want to get to the point where we take several top refugee communities and look for museum partners with collections relating to each of those communities, be it Somalia, Eritrea, Sudan, or Afghanistan, and develop lesson plans.”

Smaller kiosks could accommodate children learning the alphabet, but larger units might serve entire families, according to McKinnon. “In the camp we were looking at in Somalia, 95 percent of the people are nonliterate and never had formal school, because they were nomadic tribespeople. I fully expected to have mothers and children and families all trying to learn at the same time. Some of the older kids in the Syrian communities might be much more literate, but then there are all the kids who were five or six when the war started and they fled — and now they’re ten or eleven, and they still aren’t literate, which would have been highly unusual in Syria.”

McKinnon talked to Pasatiempo from Panama, where Curators Without Borders is directing exhibitions for the new Museum of Freedom and Human Rights. She met Haviv at a Center for Contemporary Arts event last year. “I thought, What a small world, that there are two people who are interested in refugee education living in Santa Fe! Elana has done a lot of work in refugee education in Bosnia and most recently with Syrian refugees in Turkey.”

Haviv founded Generation Human Rights in New York in 1998 and has been based in Santa Fe for nearly three years. Her nonprofit works with youth “to chart a world free from human-rights abuse and genocide through the development of multidisciplinary curricula and custom education programs,” according to its website. One curriculum titled “The Refugee” is being used in thousands of classrooms around the world, she said. The kiosk idea, however, is about self-learning, not teachers and classrooms. “These kiosks will be easy to set up, but it’s very important for our team to go to the refugee setting or the crisis setting and meet with the people. Generation Human Rights never goes to a place with something we’ve designed without the people there. There are no knights on white horses here.” The idea is for the typical kiosk to have written and image-based materials but also digital screens with lessons that can be remotely changed periodically. McKinnon and Haviv are working with a D.C. tech company, Digital Labs, on the technology component to run the screens via photovoltaic panels.

In a discussion about the iconoclastic motivations of ISIS, Haviv said the sites that have been decimated have existed for thousands of years and have survived many wars. “The most amazing thing is that when new populations moved in, they never destroyed the buildings. An example is the Temple of Bel, and within it are a church and a mosque, and the Romans and Greeks also had their gods. ISIS is destroying them because they held worship to different gods. The temples in Palmyra were from times when you had a god for your doorknob, hundreds of gods. And that’s why they’re destroying them, because they believe in only one god.”

But she emphasized, “Everything I do, everything I create, is to dissolve the view of the ‘other,’ and for any person any age to see the commonalities we all have. We don’t focus on ISIS or the reasons the current war is happening; we focus on the result, which is the refugees. My brother is photojournalist Ron Haviv, and he created a video for classrooms in Lesbos [the Greek island that has seen more than a million refugees]. I asked him to please interview young people coming off the rafts and hear their stories and their dreams. We have that, and we have six photos of his from Lesbos on the kiosk.”

Andrew Wulf, executive director of the New Mexico History Museum, called Syria: Cultural Patrimony Under Threat “our community’s gift to the Syrian people. Not just international refugee communities via the replicable kiosk prototype in this exhibition, but also as a welcome to the Syrian refugee community of Albuquerque.” ◀

▼ Opening reception and talk with Heidi McKinnon and

▼ No charge for opening reception and talk; thereafter, entrance by museum admission

We don't focus on ISIS or the reasons the current war is happening; we focus on the result, which is the refugees. — Elana Haviv, director, Generation Human Rights