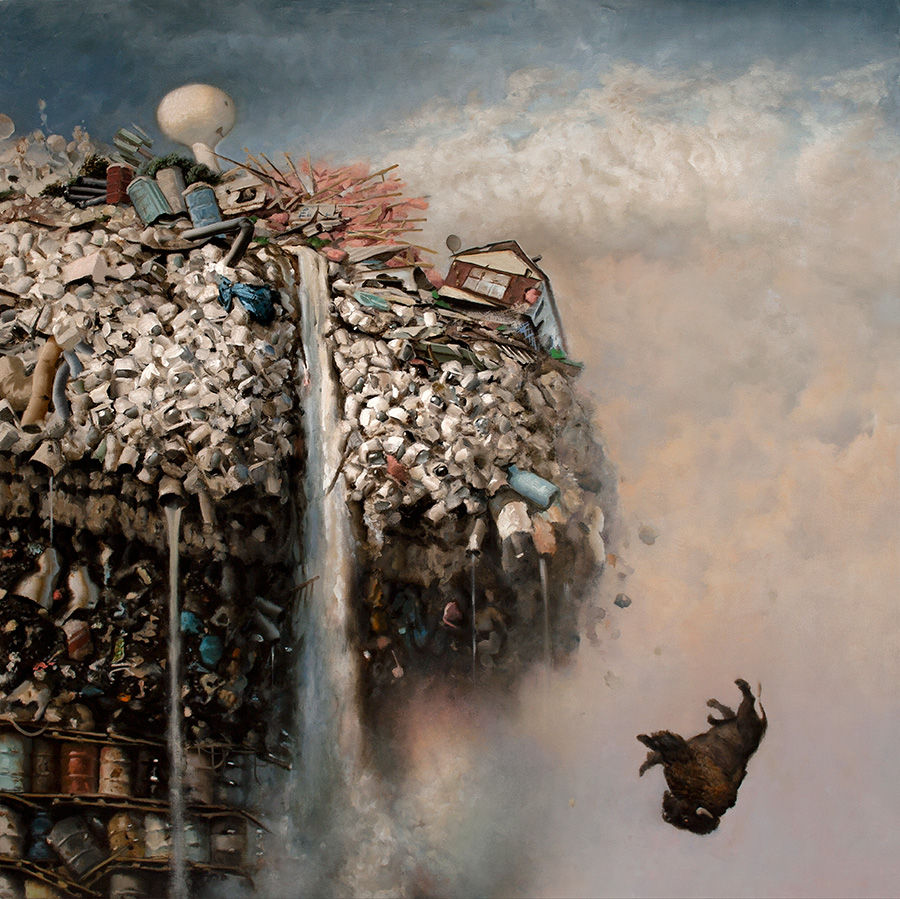 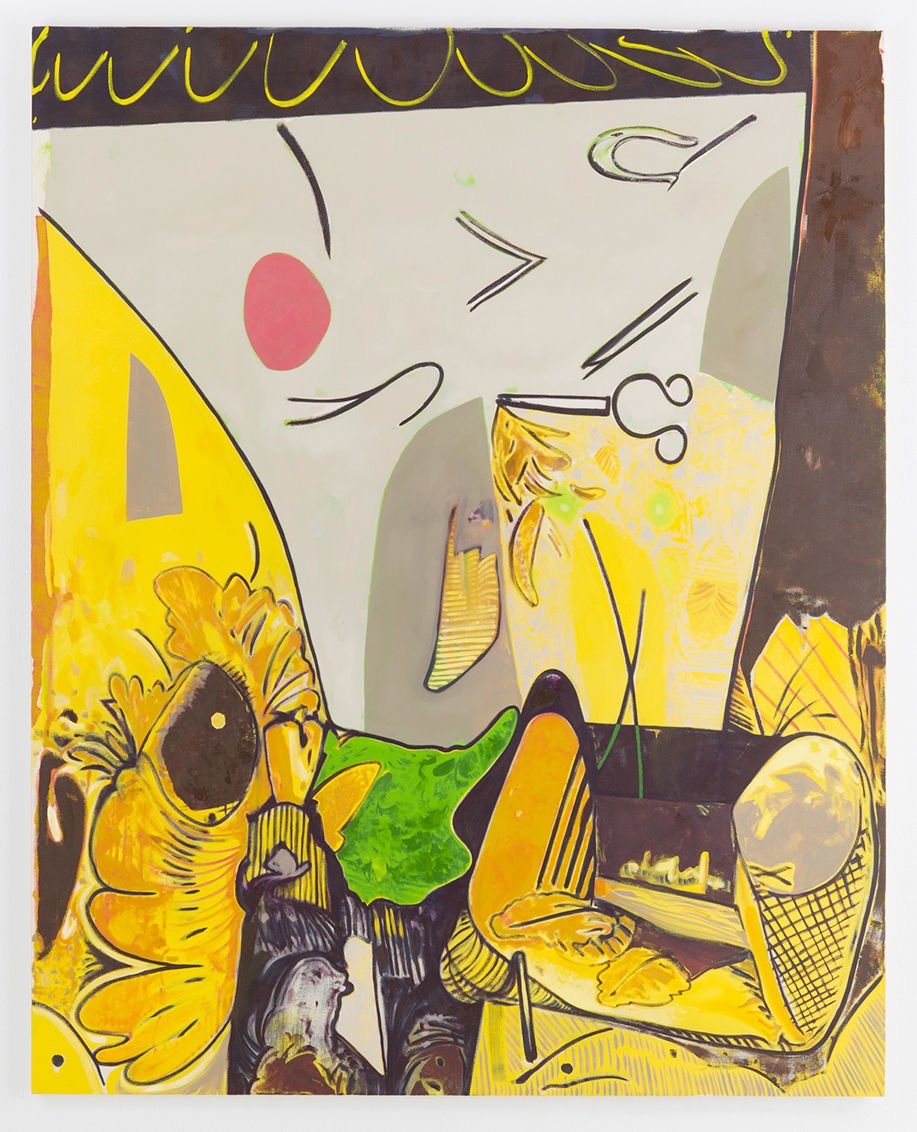 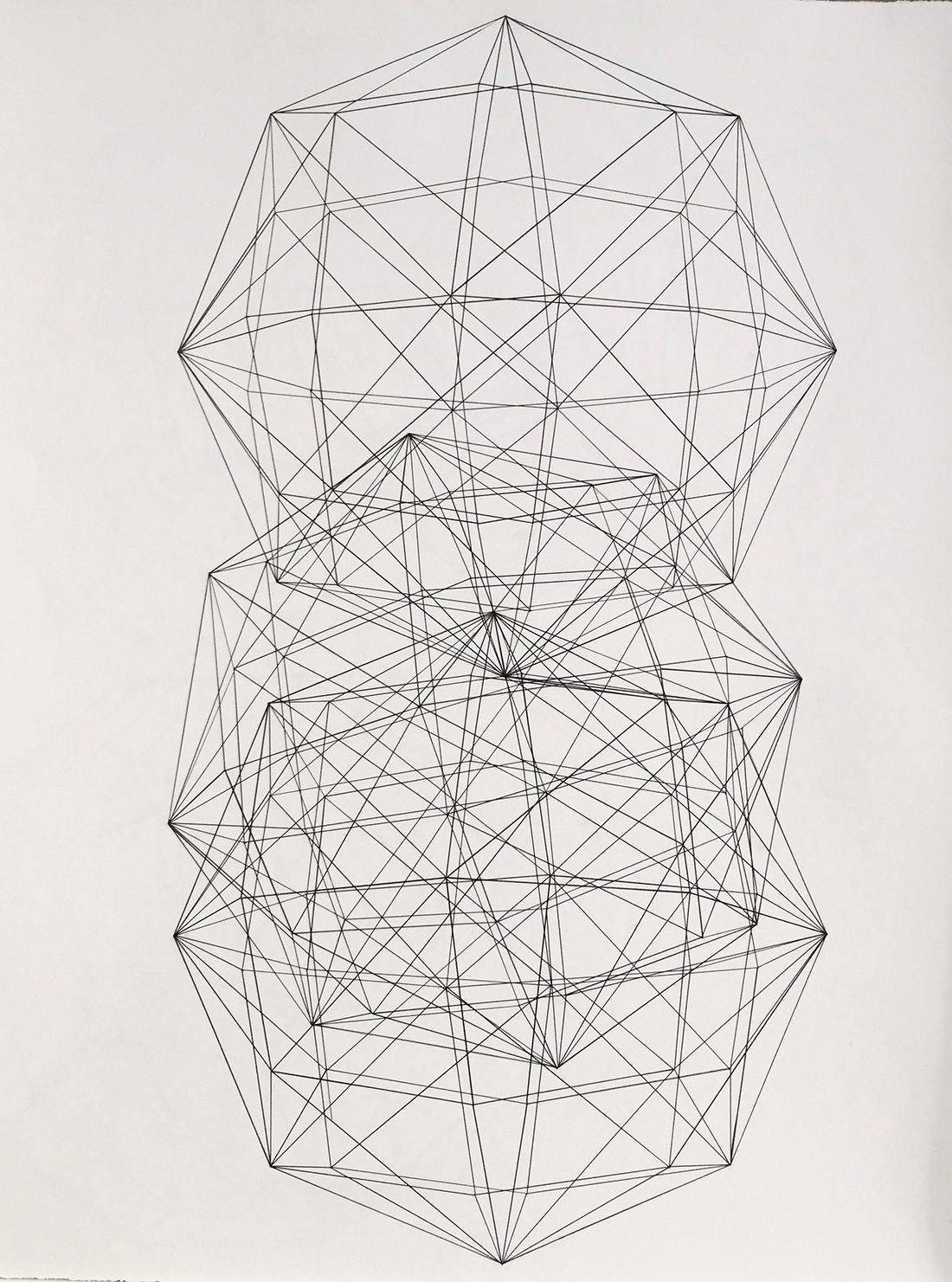 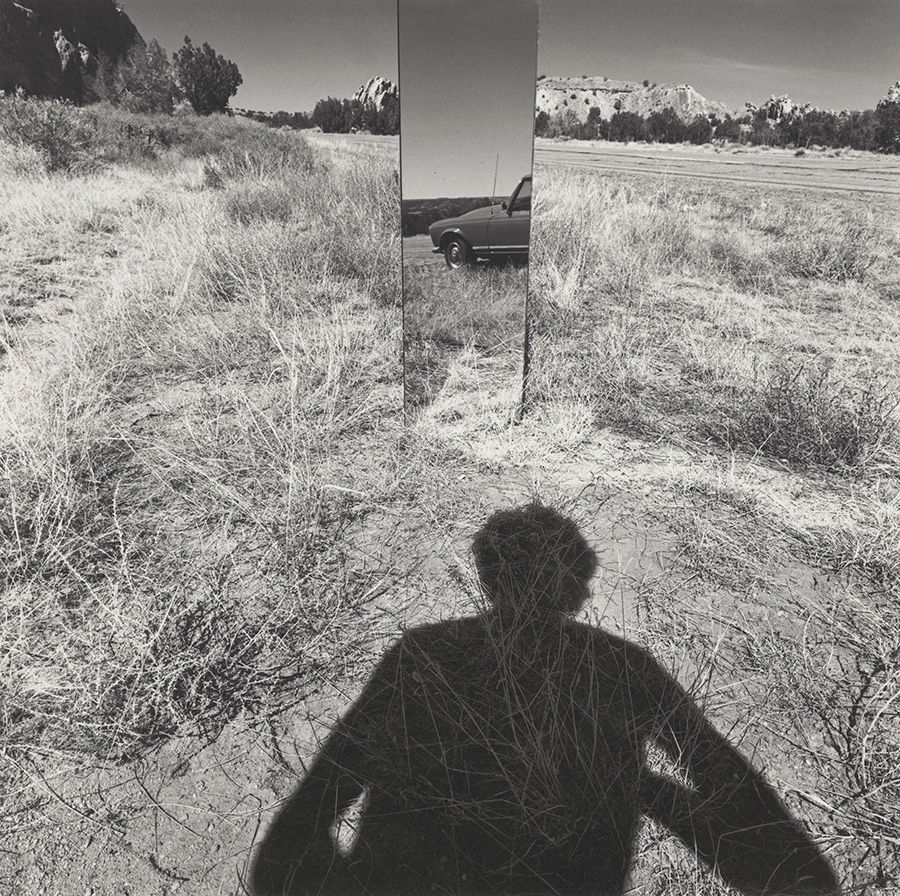 In the 2013 painting La Bajada Bluff, Scott Greene depicts a bison driven over the edge of a cliff, a historic means of slaughtering buffalo that was used by Native tribes. But Greene’s buffalo has been pushed over by the detritus of modern society, not by hunters, crowded out by a towering mountain of barrels, pipes, discarded electronics, abandoned mobile homes, and other trash that’s become the foundation on which civilization rests. “The idea for that painting came from a landfill that’s not too far away; I live in Bernalillo,” Greene told Pasatiempo. “It’s an older landfill. It’s a compaction of stuff that’s been here for a long time. The image was inspired by hiking around and looking at archaeological depositions where you have deposits of different matter that are all compacted together. I started thinking, ‘What are the depositions that we’re creating?’ You’re seeing this bluff that’s sheared away and you see all the stuff that we’re layering up.”

Greene is one of five artists in Alcoves 16/17.1, joining Bonnie Lynch, Scott Anderson, Herb Lotz, and Gloria Graham, whose work is on view until April 24 at the New Mexico Museum of Art. The show is the first in a yearlong series that reintroduces small-scale solo exhibitions set into alcove gallery spaces on the ground floor. After this cycle, Alcoves 16/17.2 follows, beginning on April 29. The alcove model for showing works by established and emerging regional artists dates back to when the museum first opened in 1917. The institution had an open-door policy in which artists could add their names to a roster and get an alcove show. The system persisted until the 1950s, and after that, the shows were more sporadic, making their most recent appearance (before the current round) in 2012. The series anticipates the museum’s upcoming centennial next year, and the last show, Alcoves 16/17.7, opens on Feb. 3, 2017.

Greene has six paintings in his alcove space. He draws on art history and contemporary culture, infusing his works with pop references as well as social and political themes, and conflating the past and the present. “Conceptually, there’s a common thread that kind of runs through the work,” he said. “Looking at art history and bringing that in as an element I’m working with, I’m making a statement about how our contemporary times are no different than in the past. There really is no past. I probably started working with that idea consciously in grad school. But my work, in terms of being political — making statements about the environment or popular culture — really goes back to undergraduate school in the late ’70s.” Greene graduated from the San Francisco Art Institute in 1981 and received an MFA in painting from the University of New Mexico in 1994. All of his landscapes depict a world in which humanity has left indelible marks, and/or nature has been subsumed by waste and excess. “A lot of my work looks fairly traditional, but I don’t work in a real traditional manner,” he said. “I’ll introduce elements throughout the whole process and try to integrate them in a way so that they look like they’ve always been there. I’m inspired by the Hudson River School painters. When you look at their work, in most of it they don’t include any sign of human activity, which is kind of amazing; in New Mexico alone, the environment has been radically shifted by the people here over 10,000 years. When we look at nature, we have this idea that it’s pristine because we don’t see a car or a road, but a lot of it has been altered already.”

Greene also invests his subject matter with a bit of humor, as with the plastic bag caught in the blue branches of a cellphone tower that’s been partially disguised as a real tree in the 2013 painting UV Celltree. Fake cell trees are designed for the same purpose as the hollow plastic boulders used to cover electrical transformers and utility boxes: to lessen their unsightly impact. “To me, they stick out more than the actual cell towers,” Greene said. “I tried to place it in a context where it might be considered beautiful.”

The show includes other works in photography, drawing, and ceramics. Anderson, the only painter besides Greene, incorporates abstracted and figurative imagery based on pre-existing photographic sources, drawing from portraiture, landscape, and still-life painting. Lynch, a ceramicist, creates unglazed, thin-walled vessel forms, each bearing a unique surface texture and markings from the firing process.

Lotz, a photographer, presents black-and-white chromium pigment prints made from negatives that are more than 40 years old. Lotz places mirrors in the landscapes for some photographs, and juxtaposes different photographic elements into a single composition in others. Looking at his work can be disorienting. As with Greene’s paintings, Lotz’s photographs depict modified terrain, landscapes in which architectural elements and other man-made structures — including automobiles — interrupt and obscure unadulterated, natural Southwestern environments.

Graham’s new work is a series of geometric drawings depicting the crystalline structures of the elements. Rather than show the elements as static, fixed formations, she introduces movement, suggested by staccato, vibratory repetitions of the linear forms. The reason for the suggested motion is because, at the molecular level, the apparent solidity of these metal and mineral forms appears more fluid, interchangeably exhibiting the physical characteristics of both particles and waves. Images such as Graham’s Pyrite drawing show the basic structure of the element, while fainter lines surrounding it echo its geometric form. The eye never settles on a fixed point, roving from one area to the next, drawn by the apparent movement of the lines.

Graham’s drawings include linear renderings of quartz, titanium, pyrite, and other elements. “Really, the basic premise is the supernova, or explosion of a star,” she told Pasatiempo. “All of these elements are formed from the enormous heat and it goes out into space.” Two older works in the show, Beryl/Silicon/Silicon and Salt/Garnet/Nickel, both from 2004, are graphite drawings on layered vellum. Each sheet of three layers of vellum shows an element taken from an electron microscope image. Salt/Garnet/Nickel is on loan from the Lannan Foundation. “The top is salt, the next layer is garnet, and then nickel.”

Graham writes in a statement that carbon “encompasses the physical and the metaphysical because it is one of those essential substances that moves in the cycle of life, death, and transformation that is shared by all.” Her works underscore the notion that, at the subatomic level, we all have elements in common. She relates the microcosmic view provided by quantum physics to the macrocosmic view of universal space. All of the elements in her drawings exist inside the human body, which she positions as the axis where the micro and macrocosmic worlds meet. “My interest is in the human body,” she said. “It has all of these elements: calcium, carbon, copper, salt, and iron. We even have a tiny bit of lithium. I love to think in terms of how these elements exist out in space and are also in our bodies.” ◀