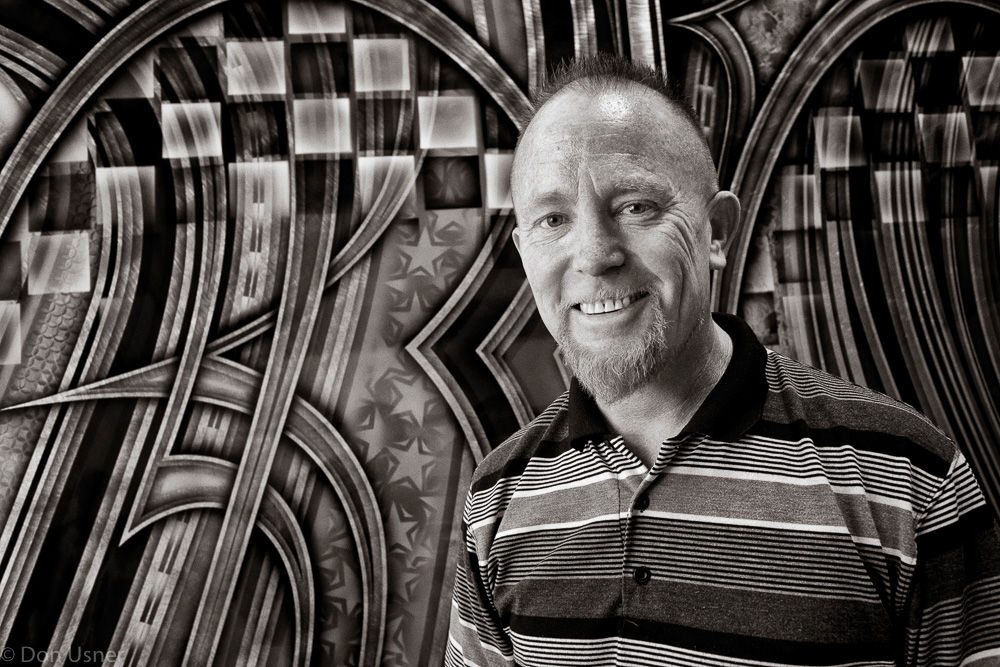 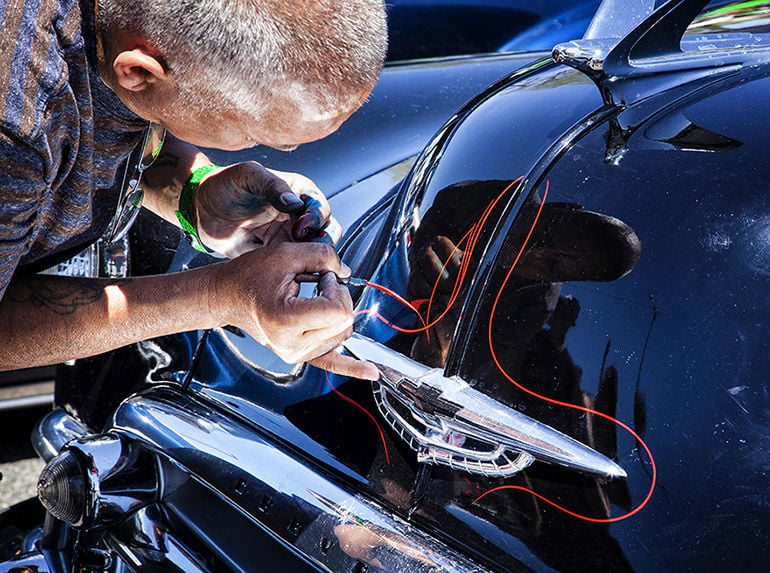 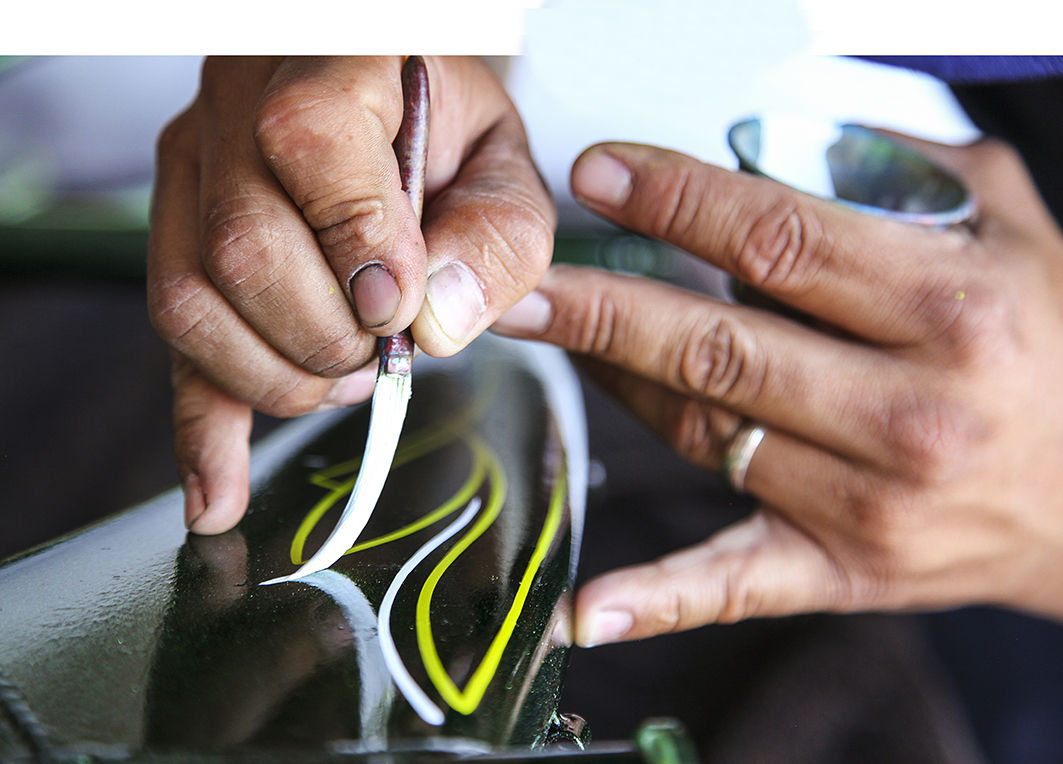 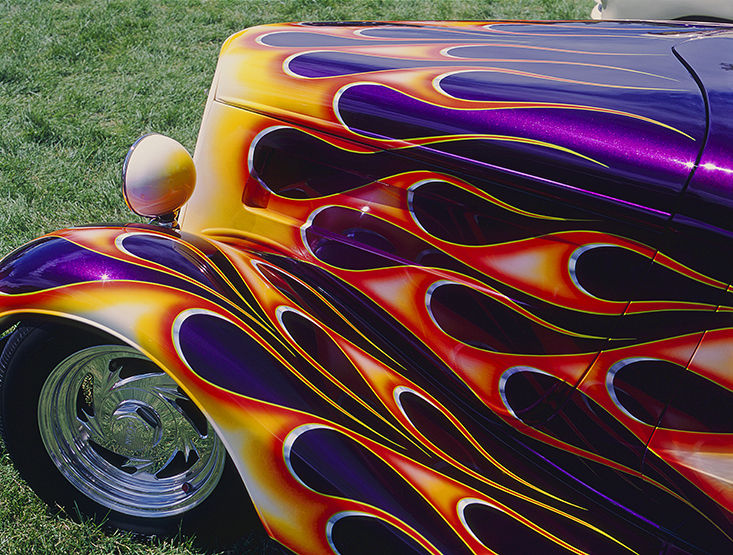 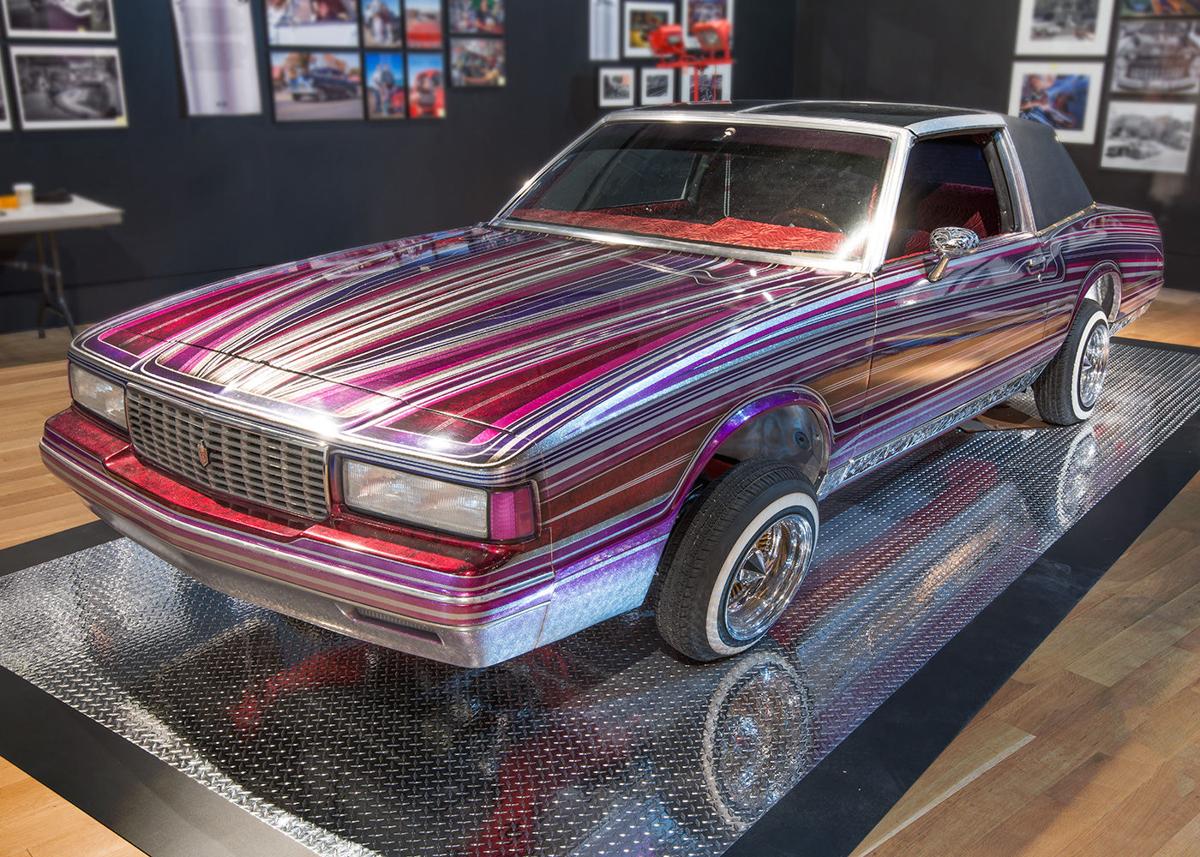 When you’ve got etched, polished chrome exhaust pipes snaking down the length of your ride, a gold or silver grill, a sparkling engine, rims, hood ornaments, and hydraulics, you need a flashy paint job to go with it. You would be hard-pressed to find a painter with a reputation as solid as that of Albuquerque native Robert Vanderslice, who puts his distinctive spin on paint jobs, creating detailed linear designs that follow the contours of the vehicles, complex configurations with elements that overlay and merge into one another. Vanderslice’s designs have won multiple awards at touring car shows. Rollin’ Malo, a 1978 Chevrolet Monte Carlo owned by Favian Garcia, for which Vanderslice was commissioned to do a custom paint job, was named Car of the Year at the Las Vegas Super Show in Nevada in 2002. The event is among the largest in the lowriding community. Another Monte Carlo with a custom Vanderslice paint job, an ’83 owned by New Mexico History Museum employee Orlando Martinez Jr., is on exhibit in Lowriders, Hoppers, and Hot Rods. The Monte Carlo is a dazzling sight, with alternating candy stripes in shades of purple, silver, and magenta and shimmering with metal flake paint. “I go with the shape of the car,” Vanderslice told Pasatiempo. “That’s my inspiration. I study the car and come up with what I’m going to do. A lot goes into it. There’s a lot of pacing, color-coordinating. There’s a lot of trial and error.”

Vanderslice begins by making an outline of the car’s shape. “A Monte Carlo like Rollin’ Malo — it’s got those beautiful shapes, so that would be what I call my framework,” he said. “I frame the car with eighth-inch or quarter-inch tape, then I begin to build in. I call it puzzle taping. What I tape first is going to get sprayed last. It’s all mentally thought out, really intricately taped. When I have people help me tape, some of them get lost.” After framing the car, he comes up with a theme. While many of his designs flow with the shape of the car, his “wild style” designs do not. “On most of my paint jobs, both sides are identical. With the wild style, both sides are totally different.”

His painting on Duality, a 1996 Cadillac Fleetwood Brougham, a photograph of which is included in the exhibit, has different patterns on the sides. One side is varying shades of blue, pink, purple, and silver, and the other side is orange, silver, purple, and maroon. “It looks like two different cars,” he said. “Plus, I drilled holes inside the panels. Wherever there were patterns, I drilled holes along them in different sizes. There will be LED lights behind the panels. It can strobe. You can program the colors you want. You can program the lights to go back and forth like Knight Rider.”

Vanderslice began working with cars as a child in Albuquerque. His father did paint jobs on the weekends for extra money. “I started helping my dad when I was six or seven, and when I was about twelve years old, I started doing paint jobs on the neighbors’ cars. If my family had wrecked anything, I would fix it. My dad showed me how to do flames. Those got boring real quick, and I couldn’t express myself. When I really started to get my stuff together, Lowrider magazine started recognizing it. They actually did two separate articles on me. They had me on Martin Luther King overpass with 15 of the cars I painted, had me run out into the street, and took a picture. They called me ‘New Mexico’s innovative stylist.’ ”

Flames are a common design element on lowriders and hot rods, but in Española and other parts of Northern New Mexico, traditional paint jobs often include murals depicting Our Lady of Guadalupe, Jesus Christ, and other religious figures, along with family portraits. “I give Española the utmost respect because they keep lowriding traditional,” Vanderslice is quoted as saying in the exhibition’s text. His own designs are a radical departure: precise, abstract compositions whose colored bands gradually shift in tone and bend back on one another like Möbius strips or something from the mind of M.C. Escher. “I don’t do murals, just patterns,” he said. “They’re really hardcore lowrider patterns.” Vanderslice calls his practice “tasteful overkill”: “I try not to leave any space untouched.”

Vanderslice can work quickly once his patterns are taped, and he still does custom projects. “On my last paint job, I went up to Pojoaque right before Good Friday and I did a whole pattern job in a day. The car was ready for me — already based, flaked. I just had to go lay my tape and shoot my colors.” Reaching this stage of expertise, along with earning recognition for his craft in a state museum exhibition, came at a cost. “A lot of those paint jobs I did on methamphetamine,” he said. “I have quite a past. I’m four years clean from crystal meth. I gave my life to the Lord three years ago. I give all honor to him. For a lot of us, we’ve got our recognition, but it’s been a long, long road.” ◀

Take a little trip: A cruise through lowrider history in New Mexico

One of the coolest things about lowrider culture is the owners’ predilection for customization — for indulging, with abandon, the impulse to individual expression. A 1980 Chevrolet Monte Carlo or a 1965 Lincoln Continental are almost viewed as only templates ... > CLICK TO READ STORY

The cholo and his lowrider have come to Brazil at last, arriving in style as a luxury import from the Chicano street culture of the American Southwest. “Alemão was the first cholo in Brazil,” says a voiceover at the start of the short documentary ... > CLICK TO READ STORY

Sonnie Jaramillo has always been into cars. As a kid in the 1950s, he spent Saturday afternoons at a hobby shop in downtown Santa Fe, competing in model car shows. “It was by where The Shed is now, that area with portales. > CLICK TO READ STORY

Sonnie Jaramillo has always been into cars. As a kid in the 1950s, he spent Saturday afternoons at a hobby shop in downtown Santa Fe, competing in model car shows. “It was by where The Shed is now, that area with portales. These two ladies owned it,” he told Pasatiempo. “I bought model cars there and chopped them down. I used to win.”