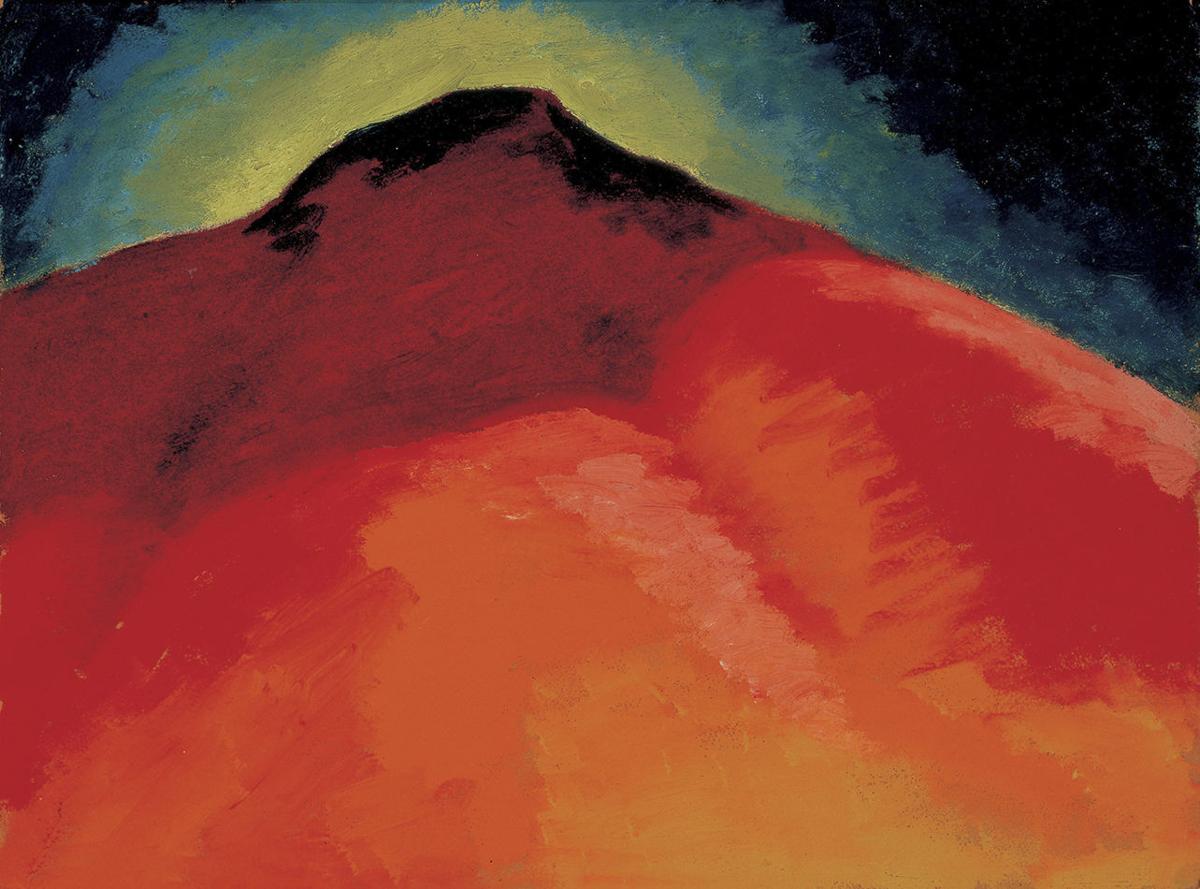 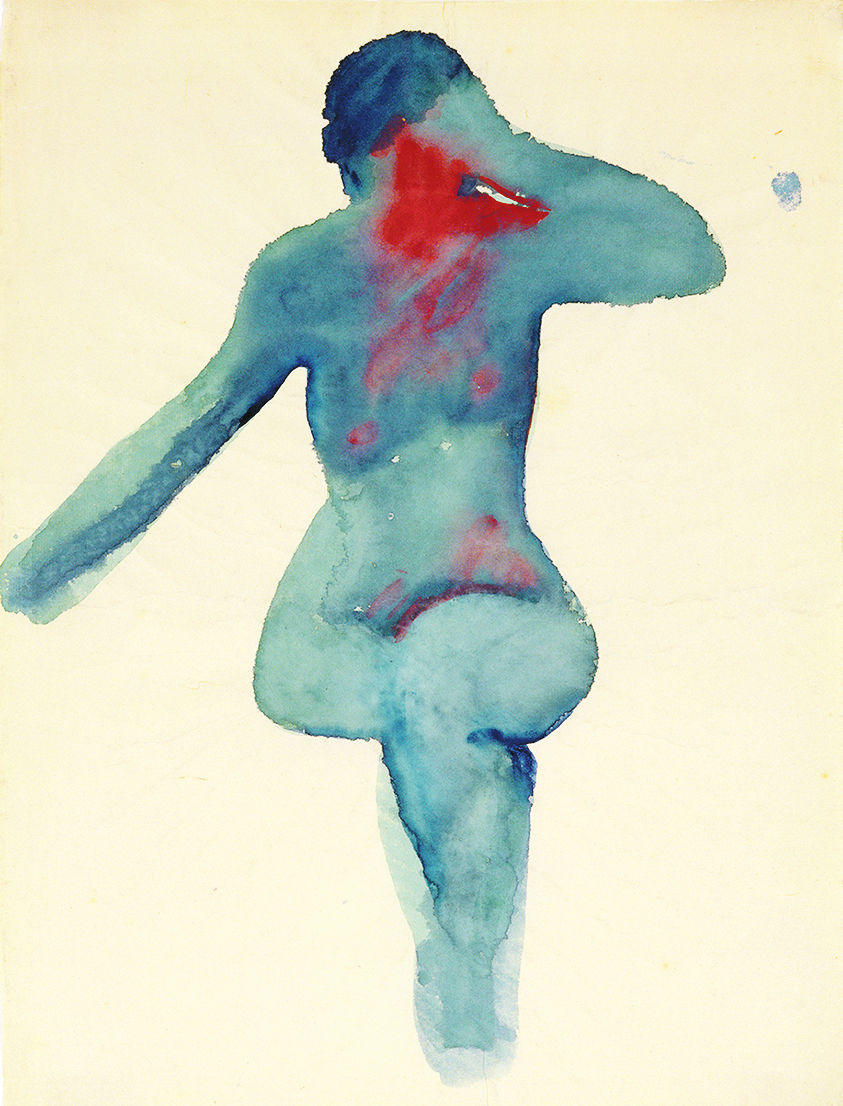 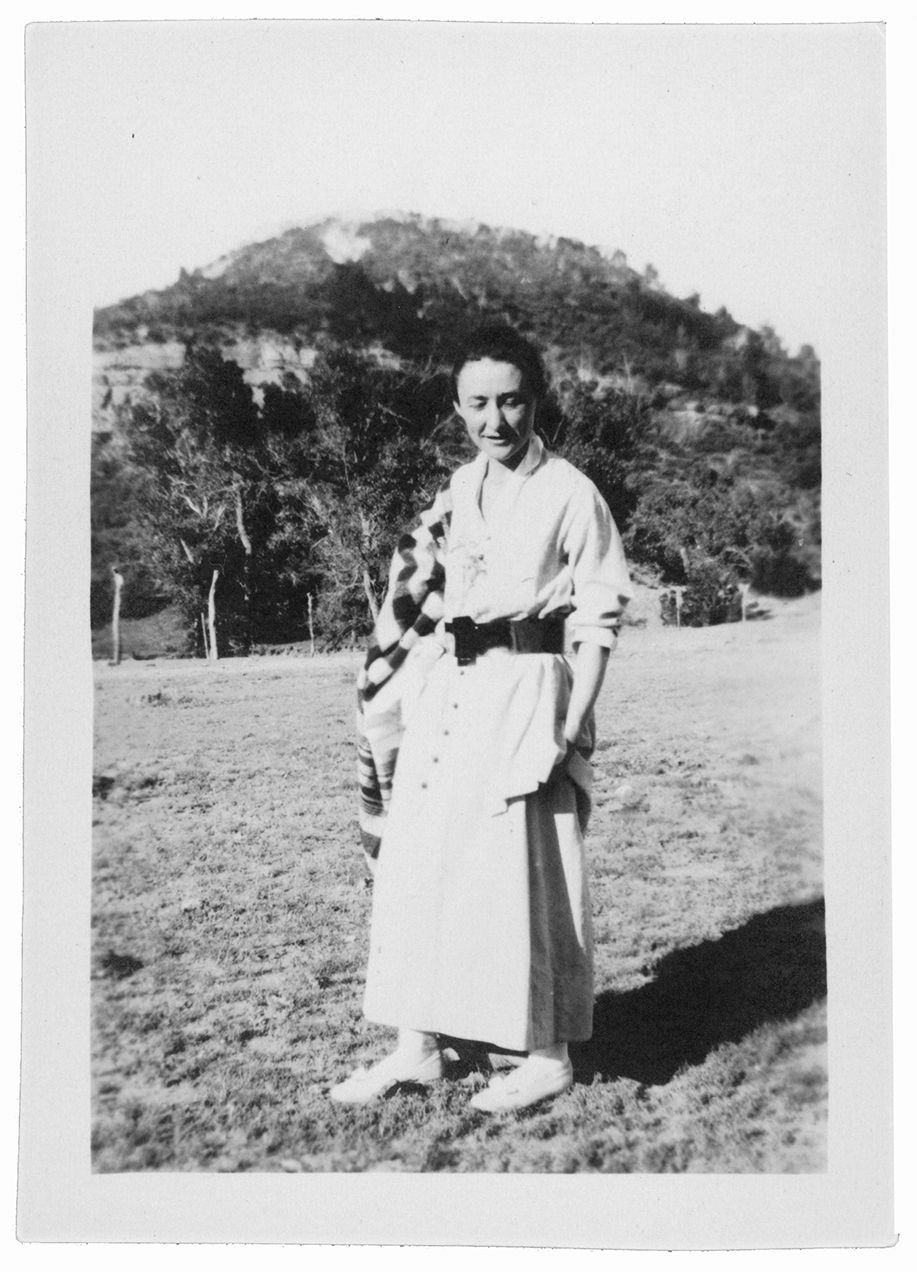 were developed while in Texas. She was committed to teaching the methods of

Arthur Wesley Dow, whose theories she was introduced to in 1912 and

which she would employ in her own work, as well. 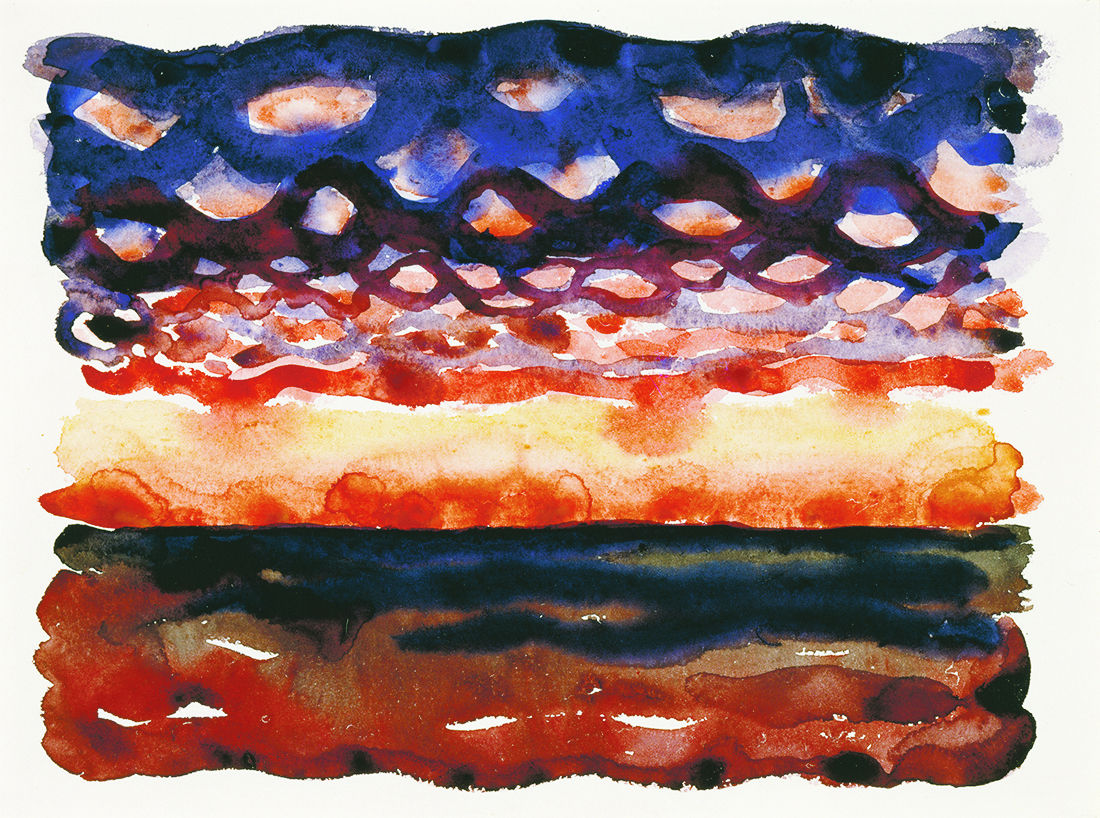 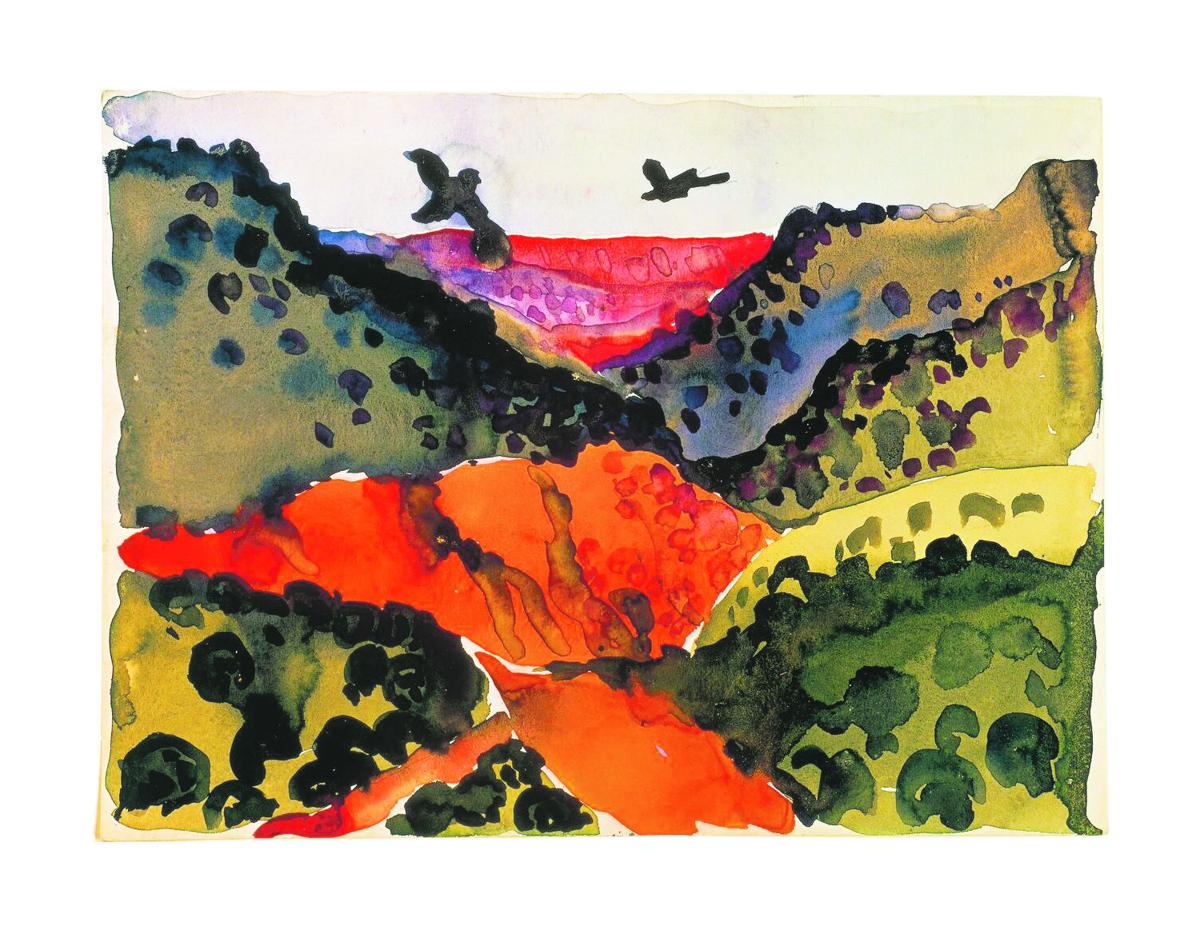 were developed while in Texas. She was committed to teaching the methods of

Arthur Wesley Dow, whose theories she was introduced to in 1912 and

which she would employ in her own work, as well.

Palo Duro Canyon, the nation’s second-largest canyon, was the subject of only five paintings Georgia O’Keeffe made during a short but significant chapter of her life. O’Keeffe headed the art department at West Texas State Normal College (now West Texas A&M University) near Amarillo from 1916 to 1918. During those years she painted a handful of views of the canyon in vibrant, unusual color schemes dominated by a bold use of yellows, blues, and reds.

Georgia O’Keeffe Museum curator Carolyn Kastner hoped to include all five paintings in the museum’s latest exhibition Georgia O’Keeffe’s Far Wide Texas, which focuses on a dynamic period when O’Keeffe created a number of abstract works inspired by the Texas Panhandle landscape. Special #21: Palo Duro Canyon, made circa 1916 and belonging to the New Mexico Museum of Art, was one of them. But in December 2003, Special #21 disappeared from a gallery wall inside the NMMoA, and more than a decade later, the stolen work has not been recovered. “It was so gorgeous,” Kastner said of the painting. “It was a brilliant yellow and brilliant red, colors that don’t appear in the landscape there. It broke my heart. I had it on the checklist, and it was Dale Kronkright who said to me, ‘Sorry, somebody has that and they won’t tell us who.’ ” (Kastner, who joined the museum staff after the theft, wasn’t aware the painting was still missing.) Kronkright is the museum’s head of conservation.

“So that one’s missing, and there’s one that couldn’t travel,” Kastner said. “We have two of them in our collection, and we’re borrowing one other that’s coming from the Panhandle-Plains Historical Museum. They’re really ecstatic paintings. They’re not her best oil paintings, but they’re the most exciting in some way because of the colors.”

For the next five years, none of the museum’s watercolors will be available to loan to other venues because they’re being used for exhibitions at home. Georgia O’Keeffe’s Far Wide Texas is part of the museum’s A Great American Artist. A Great American Story, an ongoing series of exhibitions divided by themed galleries. Far Wide Texas is on the theme “Becoming a Modern Artist,” which highlights O’Keeffe’s developing techniques in the first decade of her career. More than half of the watercolors she painted in Texas during the two years she lived there are on view, and the rest of the museum’s watercolors are on exhibit in other shows. “We’re going to run out the calendar on the whole collection of our watercolors,” Kastner said. “That’s because we so seldom put them together. Since I’ve been here, almost seven years now, they’ve never all been out at one time.”

One of the reasons the museum is doing the watercolor show now is because most of its best oil paintings have been loaned out to the Tate Modern in London for a major O’Keeffe exhibition that opens in June. “We’re the biggest lender,” Kastner said. “They will have 100 works of art, maybe more. They’re working very hard to have a clear representation right through to the end of her life, so it will be a full retrospective.”

Georgia O’Keeffe’s Far Wide Texas is accompanied by the upcoming catalog Georgia O’Keeffe: Watercolors 1916-1918, published by Radius Books. Many of the watercolors in the book are reproduced at full size. “Most of them are about 9 by 12 inches or so, so the book is trimmed to accommodate that size,” Kastner said. “There are a few that are bigger, and they’ll have a gatefold. The book is really tactile for that reason. It’s exciting to me, because I wanted them to look as representative of the work as I could, because we show them so infrequently. There’s no editorial page. There’s just artwork and titles.” A pocket in the back of the book holds an essay by Amy Von Lintel, an assistant professor of art history at West Texas A&M. Lintel discusses her research for the book in “The Making of an Exhibition Catalogue” with Eumie Imm Stroukoff, the Emily Fisher Landau Director of the museum’s O’Keeffe Research Center, on Monday, May 2. Lintel signs copies of the book following the discussion.

The museum is also showing a series of nudes O’Keeffe did while using herself as a model; she painted them using unexpected color choices similar to those used in her landscapes of the same period. In Nude Series VIII, for instance, the figure is blue, enlivened by touches of red on the torso. She also painted abstract portraits of friends, such as photographer Paul Strand, an example of which is also in the exhibit. “They aren’t in any way representational,” Kastner said. “She gave all her portraits of Paul Strand to him, and all three were in his collection at the end of his life. They both had a crush on each other, which was interrupted by Alfred Stieglitz. She met Stieglitz in 1916 before she came west to Texas. She had been going to school at Columbia University. By 1916, her friend [photographer] Anita Pollitzer had introduced O’Keeffe’s works to Stieglitz and the conversation picks up in the letters. In 1917, he gives her an exhibition.”

O’Keeffe’s interest in abstract views of landscapes and her drawing techniques were developed while in Texas. She was committed to teaching the methods of Arthur Wesley Dow, whose theories she was introduced to in 1912 and which she would employ in her own work, as well. “The earliest drawings in the style of Arthur Wesley Dow start in 1916 and go to the end of her creative life,” Kastner said. “We’ve got a great quote that’s going to go up on the wall. She writes to Stieglitz and she says, ‘It seems sure now that I will stay in Texas unless they fire me.’ So she’s totally committed to teaching and making great use of this very unusual landscape. West Texas State Normal College was a teaching college, so she’s teaching students who would become teachers.”

At the same time, O’Keeffe, who was in her twenties, was preoccupied with normal twenty-something concerns, including social activities with friends and flirting with men. While she was working on her paintings of the canyon she was exchanging romantic letters with Strand. “Her letters at this time are filled with her desire and her lack of desire because men are approaching her and she’s not so interested. But she writes to Paul Strand and says, ‘I’m interested in you.’ ”

This social time is attested to by surviving snapshots, some of which are on exhibit, of the painter visiting the canyon with friends. “There are lots of snapshots from when she was in her twenties,” said Kastner. “She was part of a big group of people that gathered on several different occasions in the canyon. We’ve been there twice to look into the canyon, and we think we know where they were when they took the photographs.” Other than O’Keeffe, the other people in the images have not been identified. “We had an intern last summer trying to track down who these people were, but we don’t have names.”

Texas was also the period of her burgeoning relationship with Stieglitz. A copy of Goethe’s Faust, inscribed to O’Keeffe by the influential photographer who became her husband, is included in the exhibit.

In Evening Star, another series of landscape-informed abstractions on view, she makes no attempt at realism, but in them one can see how reductive forms became a part of her practice and how she used colors to create a sense of mood. The museum is exhibiting five of the eight watercolors that make up the series. “The watercolors came to us primarily from her own collection, and we’ve been gifted some from the estate’s collection,” Kastner said. “When they came to us, Dale looked at them right away and expected that they would show signs of fading and found that the opposite is true. They’ve been shown very little.”

In context, O’Keeffe’s early years are integral to an understanding of her developing aesthetics. While in her twenties, she had already developed the techniques, discipline, and ideas that would be central to her long career. “If she’d never gone on, it wouldn’t be remarkable,” Kastner said. “But the fact that she’s so committed to that art practice for 60 years really tells the story. She had all the energy it took to keep being creative for such a long time.” ◀

O’Keeffe’s interest in abstract views of landscapes and her drawing techniques were developed while in Texas. She was committed to teaching the methods of Arthur Wesley Dow, whose theories she was introduced to in 1912 and which she would employ in her own work, as well.