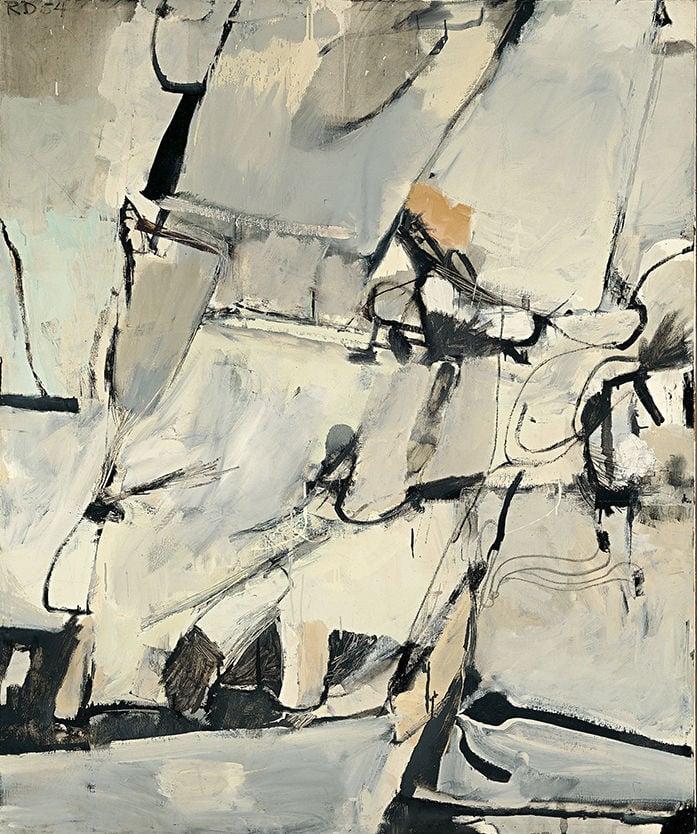 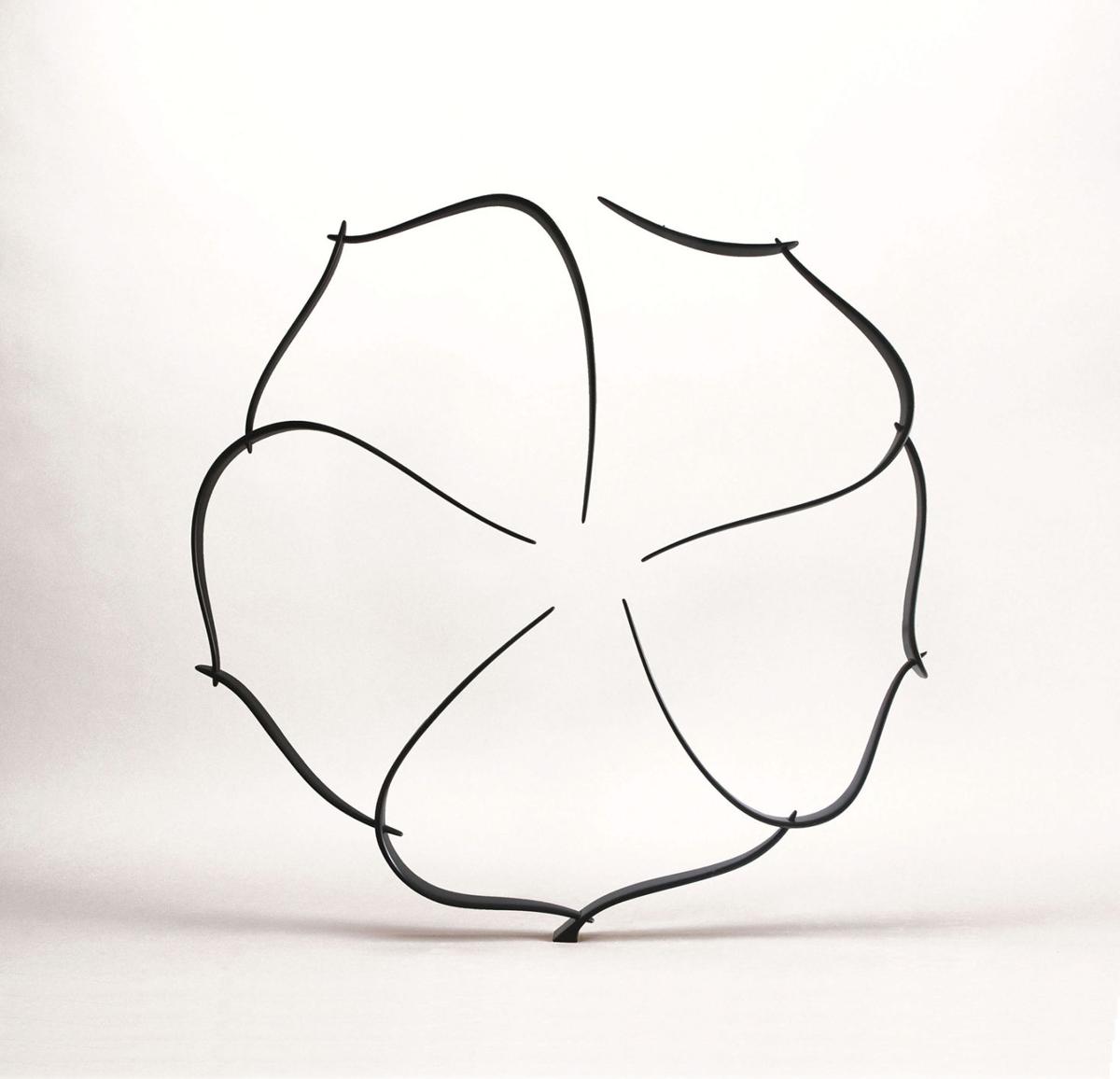 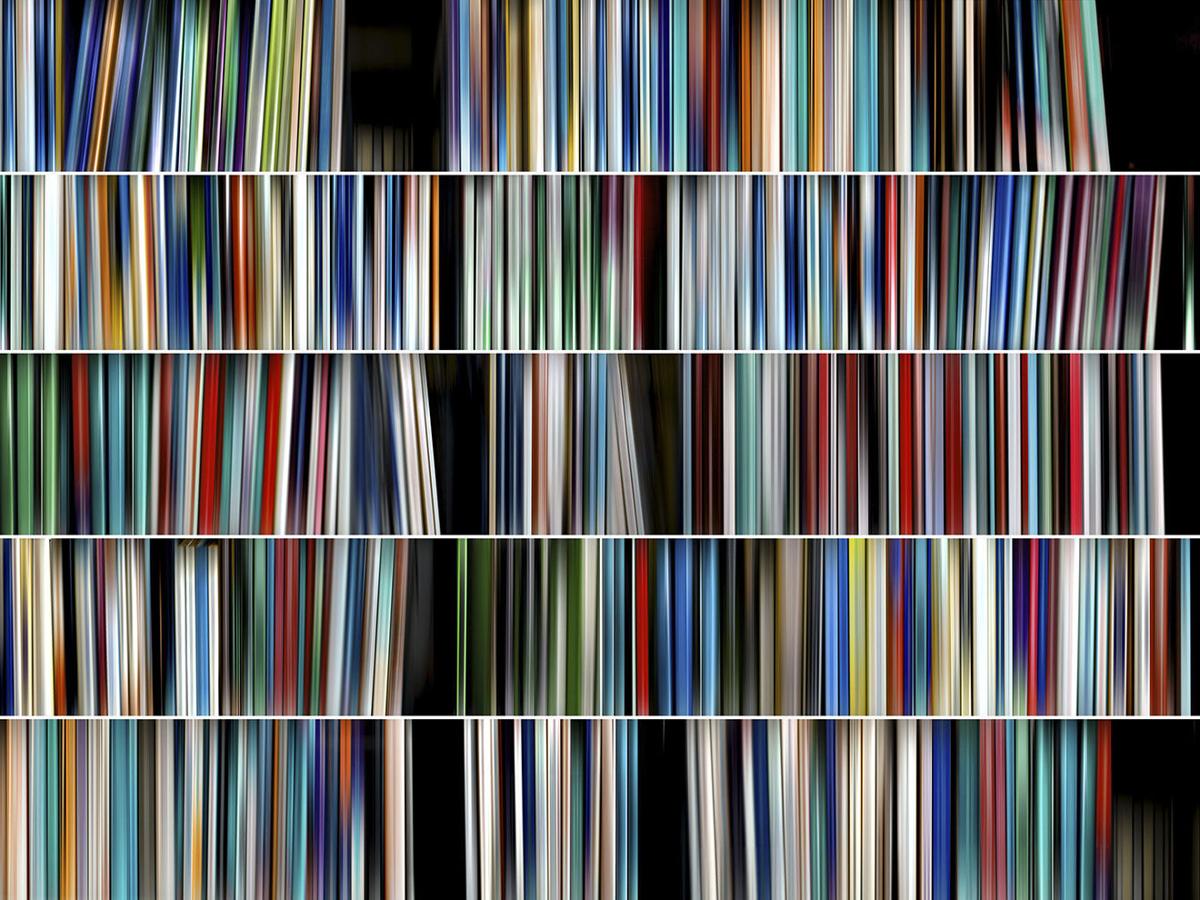 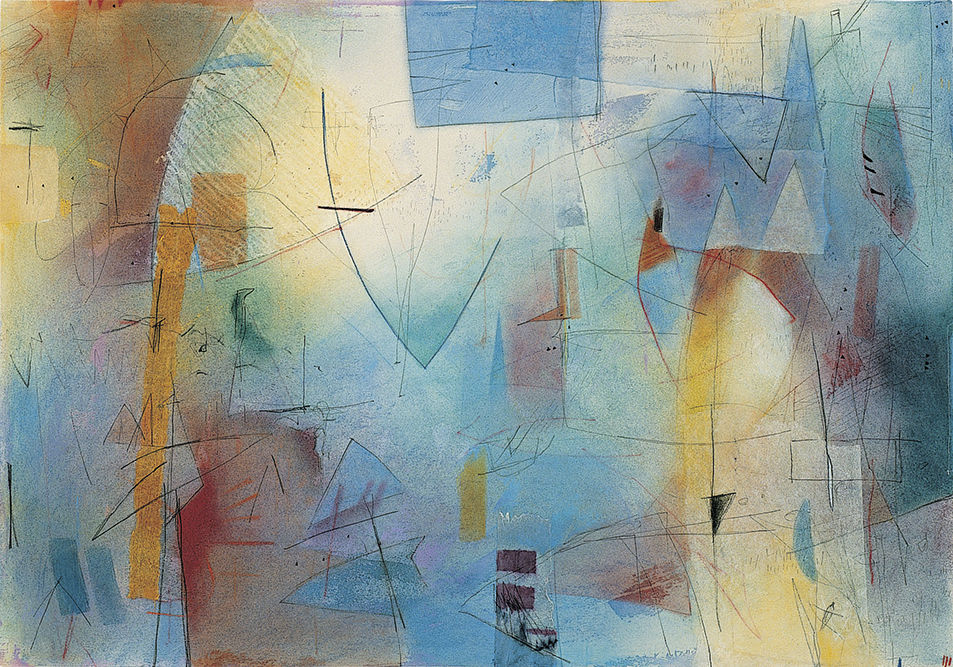 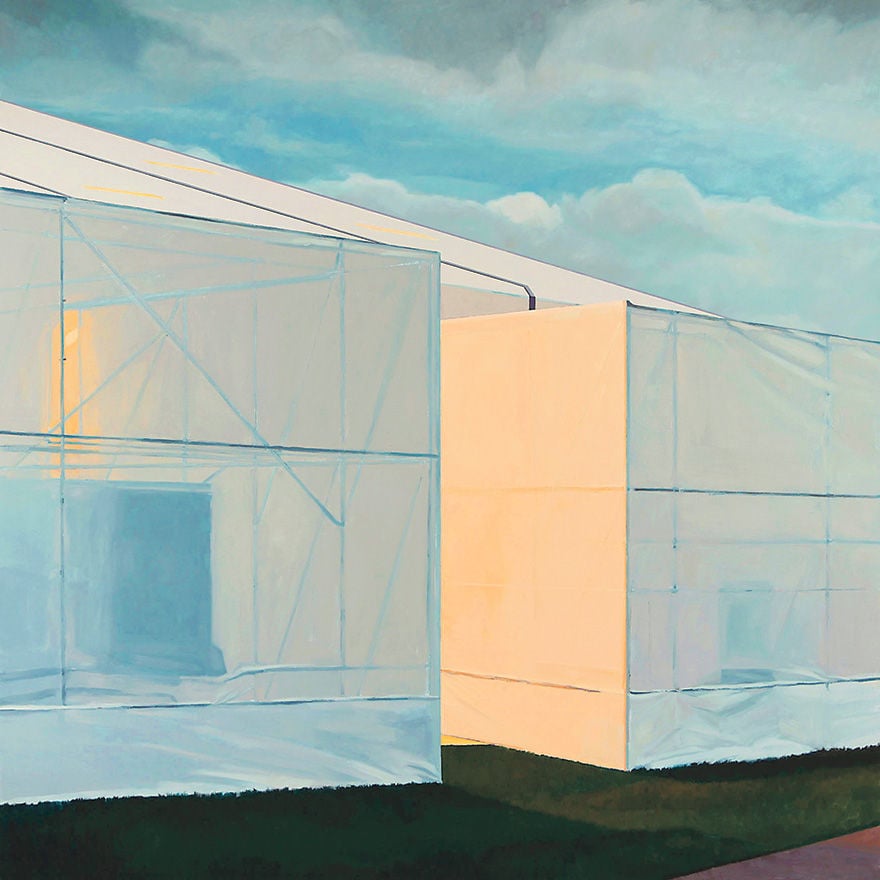 The Friends of Contemporary Art and Photography’s Art on the Edge biennial exhibits have a tradition of showing notable work by emerging artists. For its past few incarnations, Art on the Edge has focused on a smaller number of artists, letting guest curators select more pieces from each participant. For the 2015 show, on display at the New Mexico Museum of Art, Nora Burnett Abrams, associate curator at the Museum of Contemporary Art Denver, chose seven artists out of nearly 300 applicants from New Mexico and bordering states: Jill Christian, Will Clift, Danae Falliers, Ian Fisher, Sarah McKenzie, Chris Oatey, and Kate Rivers. What caught Abrams’ eye was the unusual way these artists employ traditional mediums of painting, photography, collage, and sculpture.

It’s a challenge when hanging a group show like Art on the Edge to make sure the pieces sit well together but also stand out on their own. Abrams clearly had this as a priority when she selected this iteration’s art. Jill Christian’s paintings Nocturne and Third Light explore the quality of light at various times of day. Subtle alterations in color are apparent as the eye moves over these canvases. Christian’s technique involves making a series of short, impressionistic brushstrokes in uniform, rhythmic patterns. While a single color dominates (blue, for example, in Nocturne), the overall effect is one of shifting tones, as when day transitions into night, and vice versa. Near to her pieces are several striking cloudscapes by Ian Fisher that offer a more representational view of nature’s shifting light and colors. Fisher’s brushwork is gestural. Soft, subtle tones of grays, blues, tans, and violets obliterate the sky. The colors range from dark to light, capturing in detail the moody atmosphere to produce a free-floating feel that defies being anchored by horizon lines.

Chris Oatey’s drawings, particularly Goldfish, seem to harbor hidden figures. The amorphous work consists of many lines that appear to be shimmying. An untitled drawing by the artist has a near-uniform understructure of rectangular forms arranged in a grid and overlaid by crosshatches that are more dense in some areas than in others, producing, as in Goldfish, a subtle sense of figuration.

Kate Rivers’ collages seem painterly. Her Three Wise Virgins is an arrangement of book spines that feel as though they are exploding, as from a volcano. Mutiny, another work by Rivers, is composed of book covers, arranged much like books on library shelves, but their titles have vanished beneath multiple applications of colorful oil sticks. They relate visually to the photographic work of Danae Falliers, whose library56 and library70 are vertical bands of color that have a booklike arrangement and that lie somewhere between realism and abstraction in genre. These photographs may not be of books at all, but may simply suggest them. Falliers is concerned more with line, color, rhythm, and pattern than merely with photo documentation. Falliers’ landscapes, also included in the show, are near-featureless depictions of desert terrain that appear as horizontal bands of color divided by horizon lines.

Sarah McKenzie’s realist paintings show interior and exterior human-made environments. Devoid of people, they somehow feel intimate anyway. Empty seats in an auditorium and in a waiting room evoke a sense of absence. Frieze and Gate (White Cube, Bermondsey With Mark Bradford, 2013) are near-photorealistic depictions of architectural spaces whose interiors are obscured. Frieze, which depicts the exterior of boxlike forms shrouded in plastic tarps, hints at what might lie within their interiors at the points where a subtle glow of yellow light can be perceived. Behind the glass doors of Gate, the rectangular forms of paintings on the walls are discernible — but their washed-out colors and undefined forms cannot be related to anything tangible. McKenzie’s paintings are as much about perception as they are about the absence of human form.

The only sculptural works included are those by Will Clift, who creates his graceful, curvilinear abstractions from hard woods, steel, and carbon-fiber composites. Some call to mind the free-form quality of naked tree branches, while others are more symmetrical in appearance. His Diminishing Form, Horizontal, composed of a series of increasingly smaller arched forms, exudes a staccato sense of movement — perhaps a reverberating echo made visible.

Friends of Contemporary Art and Photography is a museum support group, staffed by volunteers, that provides funding for exhibits and acquisitions. Their Art on the Edge biennial awards a “purchase” prize to one of its participating artists. This year, Oatey’s Goldfish won the prize — it is now part of the museum’s permanent collection.

In her juror’s statement, Abrams wrote that the artists are “advancing the long-held notion of the West as a site of continual creative expansion and exploration,” but that they do so outside of the typical Western themes that dominate the regional arts of the Southwest. Similarly, Material Matters: Selections From the Joann and Gifford Phillips Gift is a group of works that, according to museum curator Merry Scully, “resisted regional preconceptions as they reinvigorated and expanded their respective art scenes.” That makes it a good pairing with Art on the Edge 2015, and the two shows share an exhibit hall. But Material Matters is an older body of works, having been collected by the Phillipses in the 1960s and ’70s. For the past five years, the New Mexico Museum of Art has been showcasing art from its collections, and Material Matters is another such exhibit.

Sixteen paintings by California artists such as Matsumi Kanemitsu, Ynez Johnston, Frank Lobdell, and John McLaughlin were gifted to the museum in 1980. This was followed by gifts of work by New Mexico artists, including Eugene Newmann, Emmi Whitehorse, Forrest Moses, and Allan Graham. Scully discovered the extent of the Phillips gift while looking into the provenance of McLaughlin’s #22, a minimalist, hard-edge painting from 1961. In all, 28 selections from the Phillips collection are in the exhibit, which takes as its theme the experimental use of materials and processes. The majority of the works on view are paintings, but some sculpture, prints, and photographs are included. All are abstract, including Moses’ 1983 monotype Purple Iris, which, though figurative, is rendered in the spare, swift brushstrokes that characterize his more abstract expressionist canvases.

Whitehorse’s compositions have not changed much in style over the years. Her atmospheric Kin Nah Zin #223, a painterly collage from 1983, shows linear forms that float in ambiguous spaces. The work has a strong affinity with the pieces she makes today.

The haphazard appearance of Allan Graham’s wall sculpture Chartres can be difficult to appreciate aesthetically, though its themes of dissolution and decay are intriguing. It makes reference to the flying buttresses that help support architectural elements of Gothic cathedrals. The inclusion of torn pages from a Bible that has been translated into Navajo highlights the theme of Christianity’s spread throughout the world by way of missionary efforts. This work, made in 1984, shows that Graham’s use of text, a predominant feature of his recent practice, extends back over decades.

Thomas Barrow’s 1981 mixed-media photographic work f2 Downtown Albuquerque is a fragmented, reconstructed image, made from gelatin silver prints, that blurs the line between fine-art photography and collage. It stands as an exemplary instance of the hybrid works that seem to have been at the heart of the Phillips’ aesthetic interests — as Material Matters can attest to.

Richard Diebenkorn’s 1954 Berkeley #15 was painted in California after a stint at the University of New Mexico as a student of Raymond Jonson’s. While in school in the mid-1950s, Diebenkorn had wanted to pursue Abstract Expressionism. But there was resistance to the genre at that time in New Mexico, where romanticized depictions of the Old West still held sway. The inclusion of Berkeley #15 in the exhibit serves to remind visitors of the crossovers between California and New Mexico that took place during the post-modern period. Combining California and New Mexico artists was a curatorial decision to highlight the perceived affinity between artists working in both regions during the same general time period, but it was not an organizing feature of the original Phillips collection.

In recent years, art historians and curators have begun to recognize New Mexico as an important hub for American modernism. The influence of aesthetics developed and explored in Material Matters continued through the post-modern period, though some of the artists on display here have not yet received the critical attention now paid to New Mexico’s Taos Moderns. Post-modernism was an active movement in New Mexico, a setting that enjoyed its share of innovative artists in the genre. The artists in Material Matters were rejecting traditional notions of art and expanding into more conceptual realms, as did their counterparts on the country’s coasts. Perusing a body of work from a single collection can offer insights that extend beyond its collectors’ personal tastes. The Phillipses seemed to recognize the importance of these artists early on. That their legacies have continued suggests these collectors had impeccable instincts. ◀

▼ Art on the Edge 2015 and Material Matters: Selections From the Joann

Wow, its a beautiful contemporary painting. It is totally unusual and different. It can also be painted as a 3D graphics which make it something different and unique. You can also get more info here.